So Formula E Is Way Badder-Ass Than We Expected

After years of wanting to lay down in NYC, the FIA Formula E Qualcomm New York City finally descended upon Brooklyn earlier this month.

With Lady Liberty looking on from afar, 10 teams, 20 and some 15,000 fans gathered on the water’s edge in Red Hook to watch the flag drop on the first major car race to hit the five boroughs in modern history.

After 48 hours of high-octane — but decidedly low fuel-economy — racing, we learned that Formula E is more than just a watered-down Formula 1. It’s much, much more.

1. The Cars Are Built for Stamina
Each Formula E team is beholden to FIA’s stringent standards, wherein the only component they can modify is the power box. At present, these batteries even last the whole race: each driver has two cars, and they make a lightning-fast pit stop mid-race to jump out of one and into another. Most teams are super secretive about their proprietary batteries: no photos, no specs. But when we asked the Audi team, they said “Shoot whatever. The technology is changing so fast, be gone by next year. What does it matter?”

Beyond the batteries, though, everything is controlled by the racing federation.

Whereas other races use different tires for different conditions, each car in Formula E is allotted two sets of the exact same tires from Michelin. This puts a great deal of pressure on the driver: if you race a slick track Friday, a dry track on Saturday, and then a very hot track Sunday, you’re basically running three different courses on the same tire. That requires intense adjustments. It also means that if you blow a tire or two, you’re f*cked. 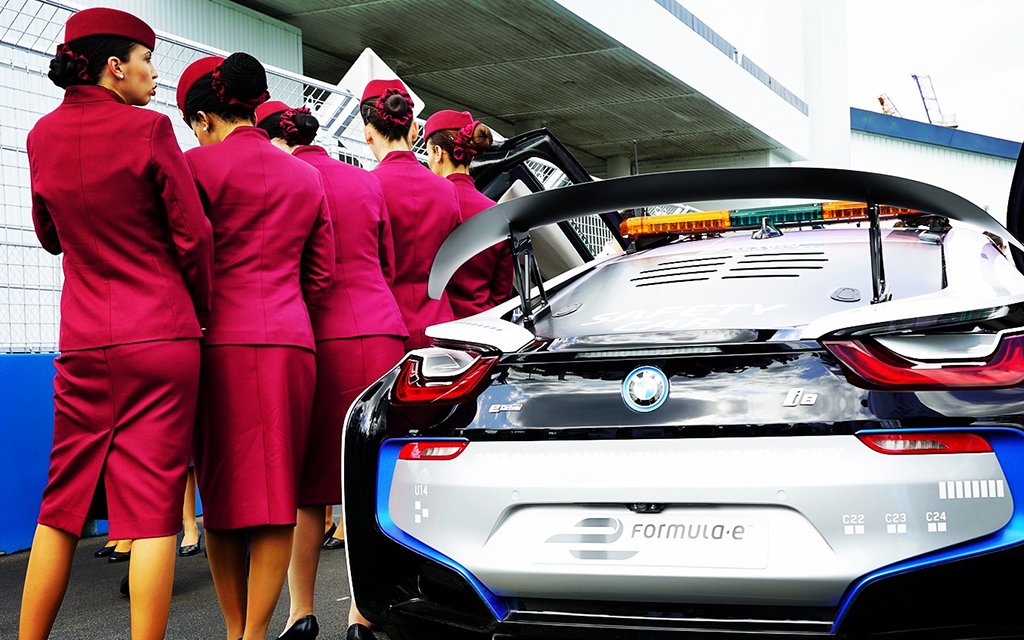 2. The Are Critical
Rather than starting off with a safety lap, the cars line up on a dummy grid according to their time-trial placements and then contest a standing start. The slim, devious track formats don’t allow for high top speeds (nor could the cars’ energy sustain them), so acceleration makes all the difference. The cars top out at about 150 but boast a 0-60 of about 3 seconds. “When it comes to whether we want speed or acceleration,” says Dieter Gass, Head of Audi Motorsports, “we want acceleration.”

3. New Tracks, Every Year
In Formula 1 and Indy Car racing, courses are pretty much identical from one year to the next, which gives veteran drivers a serious advantage. In Formula E, they change every time. I thought that this was perhaps a facet of changing city regulations year over year, but that’s not the case. When I inquired why they don’t standardize the tracks, Allen McKinney of Audi responded, “What fun would that be? Making it difficult makes it interesting.”

4. Drivers Have More to Think About Than Ever Before
There’s a whole helluva a lot more than driving going on here. Each car can only store as much battery power as it would use in one race by regulation, so racers have to monitor all sorts of extra information. The steering wheel looks like the Sega I had when I was 12. Drivers have to constantly evaluate where they can slow down to recoup some battery, often letting off the gas just to block other teams from passing.

“It’s absolute performance vs. relative performance,” said McKinney. “You have to use your brain more in this race than others. You have to see the big picture.”

In Formula One — where teams can dump a couple hundred million dollars a year into their car — you end up with maybe 2-5 drivers having a shot at the podium. Formula E levels the playing field, and on race day, you’re looking at maybe 12-15 teams that can win. And those are the races people remember.

5. The Noise (or Lack Thereof)
We get it, people are exhilarated by the whinnying, gurgling exhaust of gas-powered racing. But before you go judging, consider that it’s how quiet these cars are that allows them to take their show to megacities all over the world. Plus, it’s not so bad for the kiddies’ ears. I’m damn near deaf from growing up on racing — so it’s not so bad for mine, either.

6. Innovative Race Venues
Formula E has professed a commitment to making all of their race locations as urban as possible. They wanted Central Park for their New York race, but couldn’t convince the city to move those pesky trees. Instead, they laid down 1.2 miles of tight, feisty track in Red Hook with only two or three possible places . Each race ran almost 50 laps. And sure, they could race 17 laps at Circuit of Spa or 4 at Nürburgring, but that would “change the DNA of the race,” adds Gass. “We would rather see 49 laps right here.” It’s sort of the whole point.

7. It’s a Race for the People — and the Planet
Formula E is a race series that combines tech, and entertainment without a strong inclination towards one over the others. A three-legged stool, if you will. It’s low cost, environmentally conscious and quiet. At their summit in Brooklyn’s New Lab, Alex Tai, CEO of DS Virgin Racing said, “We are committed to using power and innovation to positively affect communities. To inspire a positive action and bring about a positive outcome.”

8. It’s a Race for the Future
I dare you to try to keep up with this tech. If you can think of it — it’s already old. The battery power for Series 5 (two years from now) will double what’s in place today. That means each driver will only have one car. It means the tires will have to change. It means the rules will have to change. Where in Formula 1, you might have them shaving 2 seconds a year off laps times, Formula E is shaving 10% off every year. And with big dogs like Audi,  and Jaguar in the mix, you have companies taking what they learn here on the track and applying it to a cleaner future on the road.

9. Did We Mention That This Is All Tremendously Fun?
Sure, there was the quintessential G.H.Mumm’s Champagne shower at the end, when Sam Bird of DS Virgin Racing took the trophy. And sure, they have the FanBoost schtick that allows fans to call out their favorite driver on social media, and the winner literally gets a boost of power during the race — like a video game in real time.

But it’s more than that.

“In most races,” said McKinney, “If [my competitor] said, ‘Black,’ I would say, ‘White.’ Just because. But not here at Formula E. It’s a competition, sure. But we share a common goal: the future. Here, we work together.”

Please Stop Killing the Shows of My Youth With Mediocre Reboots