If you ever want to win a bar bet, you could propose a wager to a fellow patron as to whether Atlanta is west of Detroit (it is) or ask them to name the Southeastern Conference’s all-time leader in passing yards because they’ll inevitably say Peyton Manning, Danny Wuerffel or A.J. McCarron — and they’ll be wrong. The answer is former Georgia Bulldog Aaron Murray (13,166 passing yards from 2010-13) and it’s not even all that close.

The SEC’s all-time leader in passing by almost 1,000 yards (ex-Missouri quarterback Drew Lock is actually second), the former Bulldog is also the conference’s all-time leader in touchdowns (121) and went 34-17 during his four years as Georgia’s starting quarterback. Selected by the Kansas City Chiefs in the fifth round of the 2014 NFL Draft, Murray bounced around during his professional career and now analyzes football for ESPN on the SEC Network instead of playing the game that made him a household name.

Though he won’t be attending Monday night’s NCAA championship game between the Bulldogs and the TCU Horned Frogs at SoFi Stadium in Los Angeles, Murray will be watching with some Twisted Teas in hand as Georgia tries to become the first college football team in a decade to win back-to-back national titles. If the undefeated Bulldogs (14-0) are able to pull it off, Murray believes they’ll be more than just champs. The Bulldogs, with Kirby Smart as coach, will be a dynasty.

“I’ve believed for the entire season that Georgia is in the early stages of a dynasty. I think Kirby has elevated this program to a completely different level,” Murray tells InsideHook. “There are a lot of people who want to see them win another national title before saying there is a dynasty in progress right now. This is an opportunity for them to send the message that the dynasty has begun. I think it started when they made the 2017 national title game and didn’t win it. This program has been heading in the direction of being able to compete with the best of the best and it culminated with a national championship last year. I think another title is going to happen on Monday night.” 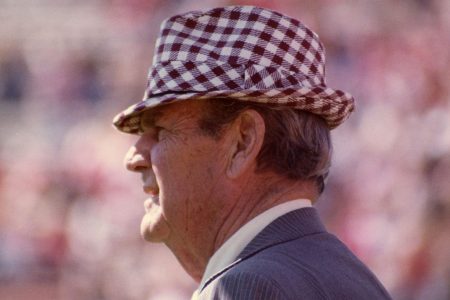 Bullish about his alma mater’s chances tonight, Murray’s confidence in Georgia already extends to next season.

“They’ve had one loss in two years and I don’t think the schedule is crazy difficult next year,” he says. “Texas and Oklahoma joining the SEC will make the conference tougher. I think Tennessee took a massive step forward and will be a good team next year. There’ll be teams that can challenge them, but they have set the bar with what they have as a coaching staff and they’re getting four- and five-star guys left and right from high school and the portal. They’re in a position right now, knock on wood, to not only win on Monday night but to be the favorites to win the national championship next year.”

And as long as Smart, who has gone 80-15 in seven seasons since taking over at his alma mater from Mark Richt in 2016, is coaching the Bulldogs, there’s no reason that Georgia can’t become the next Alabama.

“Alabama is what everyone’s striving for. I don’t know if anyone will ever accomplish what Nick Saban did there, but Kirby’s on a trajectory right now at Georgia to get close,” Murray says. “He’s done a good job of reiterating to this team that they aren’t last year’s team and challenging them to match the production they had last year. It’s like “Can you be just as good? Can you put yourself in a situation to win championships, win individual awards and go on and be a first-round draft pick?” There are plenty of ways to incentivize guys to get back to work and go out there and execute at a high level. I think Kirby’s done a great job of maximizing that with his players. If Georgia keeps winning, they’ll keep getting top players that want to come in there and compete and win championships and go get drafted. It’s the snowball effect. Winning back-to-back titles, which has never happened since they instituted the playoffs or in this era, would only continue to accelerate that train down the tracks.”

The rest of the programs in college football, starting with the TCU Horned Frogs, would be wise to watch out.