You Think You Know Bo? A New Book Shines a Light on the Legendary Athlete.

A legit two-sport star, Bo Jackson doesn't get his due for what he accomplished.
John W. McDonough /Sports Illustrated via Getty
By Evan Bleier @itishowitis

The first athlete in history to be voted to play in both the National Football League’s Pro Bowl and Major League Baseball’s All-Star game, Vincent Edward “Bo” Jackson may have given his most-impressive athletic performance when he was a triple-sport athlete at McAdory High School in Alabama.

Jackson, who got the nickname Bo because his older brother used to say he was as mean as a boar hog, was an all-state athlete in baseball, football and track at McAdory High and set the state high-school home run record as a senior when he walloped 21 homers in just 25 games. The future Raider, Royal, White Sox and Angel, would have had more homers, but he missed seven games to compete in track — where he won the Alabama 3A state decathlon title without even having to run the mile because he was enough points ahead no one could have caught him. Before he went on to play for Auburn and win the 1985 Heisman Trophy, Jackson also set Alabama high school records in the triple and high jumps and had 1,173 rushing yards for the McAdory football team in his senior season.

A household name by the end of the ’80s who was the face of a memorable Nike ad campaign (“Bo Knows”), a character in a Saturday morning cartoon show with Michael Jordan and Wayne Gretzky (ProStars) and a playable cheat code in a Nintendo game (Tecmo Bowl), Jackson was a legend before he was 18. It’s often said legends never die, but they do fade away. Sportswriter Jeff Pearlman, who has written numerous best-selling sports biographies, didn’t want Jackson’s story to be forgotten so he spent more than two years conducting over 700 interviews and writing about 10,000 pages of notes to produce his new book The Last Folk Hero: The Life and Myth of Bo Jackson.

“This sounds corny, but it really does make me sad that people don’t remember him in the way they do with Jordan,” Pearlman tells InsideHook. “He’s the best athlete to walk the planet in our lifetime. I don’t have any doubt on that. I don’t care if you want to say LeBron James, Jim Thorpe, Carl Lewis or whoever. I don’t think there’s anyone close to Bo Jackson and I think his legacy is worthy of remembering and maybe celebrating.”

What else does Pearlman think about Jackson, whose career was cut short due to a major hip injury in the early ’90s, after writing the new book? We talked to him to find out.

InsideHook: You spoke to Bo Jackson about the book, but he chose not to be involved. Despite that, why was telling his story so important to you?

Jeff Pearlman: I literally grew up with Bo Jackson posters on my wall. I was an RA my sophomore year at the University of Delaware and you had to have a chart on your door showing where you were at all times. So, I took a Bo Jackson poster where it’s him in all different sports and poses and I wrote, “Bo knows Jeff is at class. Bo knows Jeff is at the dining hall, etc.” Some asshole wrote all over him in permanent marker and I was actually devastated because I crafted that thing. I love Bo Jackson. His career is nostalgic to me. Diving into it was like diving into a 14- year-old-me. When I think of Bo Jackson or see certain clips of him, I remember being blown away as a kid. I just wanted to write a good book about someone I admire. I hated he is kind of slipping away a little bit in history.

IH: Why do you think he doesn’t get remembered the same way as other stars of his time like Gretzky or Jordan?

JP: I think the No. 1 problem is longevity. His career was cut short. What happens a lot of the time when someone gets hurt and then come backs is people remember the diminished version. I’m sure there are people who think of Bo Jackson in his White Sox days or maybe his final MLB season with the Angels. Or, people remember him from the playoff game against Cincinnati when he had his hip pulled out of the socket. I couldn’t tell you what the best Michael Jordan dunk is because there are 7,000 to choose from. There are around 20 mind-blowing Bo Jackson highlights to choose from, but that’s about it because the sample size is not very big. I would hate for generations of sports fans to have no idea who he was because of the brevity of it all. We always think our generation’s athletes are greater than past. Bo Jackson is a real exception to that. He was every bit as amazing as people say he was. 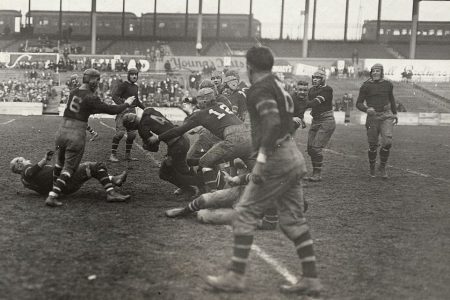 How World War I Led to the Creation of the NFL

We talked to Chicago sportswriter Chris Serb about his book "War Football: World War I and the Birth of the NFL"

IH: Did you discover an amazing Bo Jackson story or feat you didn’t know when you were researching the new book?

JP: He had so many insane athletic moments that I started leaving some out, but this one blew my mind. The 1989 MLB All-Star game was the only one Jackson was selected for. The manager was Tony La Russa and he told Jackson he was going to have him lead-off. It’s a beautiful day in Anaheim and Vin Scully is calling the game with Ronald Reagan in the booth. Nike had just launched their new “Bo Knows” ad campaign and the commercial was scheduled to debut during the All-Star game after much internal debate. Nike executives are watching the game at Mickey Mantle’s restaurant in Manhattan and Jackson led off the game with a home run. The execs go fucking crazy and they’re cheering and hugging because it’s this moment of confluence where everything comes together. Within the hour, the commercial debuted and sends Jackson off on this trajectory to iconic status.

IH: Aside from the longetiviy, is there a reason that status didn’t really hold up?

JP: Jackson had a really bad stutter he grew up with that got better at Auburn, but was never great. He has a big heart but was also bad with the media and could be incredibly prickly, standoffish or guarded. He’s been asked a bunch of times if he’s sad his career was shortened. He always says no and I think he’s being honest. He’s not burdened by what could have been. He’s not a commentator. He’s not a coach. He doesn’t have his name on knee braces. Instead, he runs a bunch of companies and goes hunting and lives in suburban Chicago. He shovels his own driveway and he drives a Ford truck. I don’t think he ever really cared about being a celebrity. I don’t think he’s lost one minute of sleep over not being in the Hall of Fame. To his credit, I don’t think he cares at all. It’s beautiful.

IH: Will we ever see an athlete like Bo Jackson again?

JP: I’m required to say no, but I don’t actually know if that’s true because hopefully the Earth is around a long period of time. The issue in the immediate future is kids are no longer encouraged to play multiple sports. If you’re a football phenom at age 10, people will say you should devote your offseason to football. Walter Payton, Jackson, Barry Bonds…all these guys grew up playing multiple sports and diversifying. It’s hard to develop in multiple sports if you’re not playing multiple sports. I think that’s a big hindrance on the possibility of another Bo Jackson. In a lot of ways, Shohei Ohtani is the closest thing we have to Bo Jackson. He’s a cultural icon and he does two unique things even though they’re both on a baseball field.