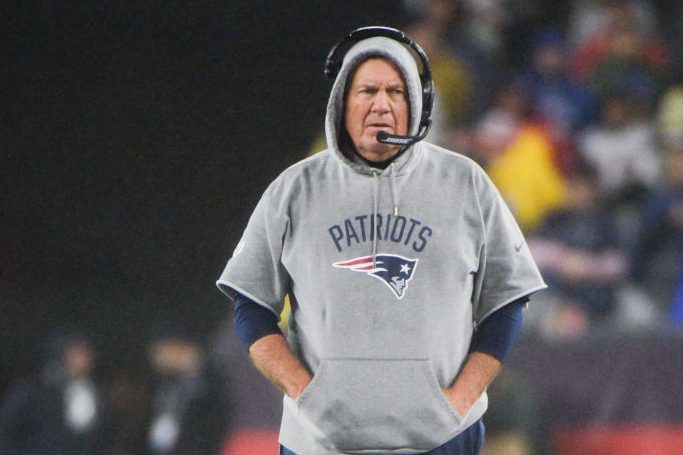 Barring something unforeseen, Patriots coach Bill Belichick will kick off an NFL season without a franchise quarterback on New England’s roster for the first time during his tenure in Foxboro.

Before Tom Brady, who the 67-year-old coach had the luxury of relying on for two decades, Belichick had Drew Bledsoe, a solid if unspectacular NFL quarterback who took the Patriots to the Super Bowl in 1996 and made four Pro Bowls.

With Brady now banished to Tampa Bay, Belichick is poised to begin 2020 with journeyman Brian Hoyer, career backup Cody Kessler and second-year player Jarrett Stidham as his only quarterbacks. It’s a dicey move for a coach who is regarded as the best in the business.

Before Brady took over for the Patriots in Week 2 of 2001 against the Jets after Bledsoe was injured by a brutal Mo Lewis hit, Belichick had a record of just 5-12 as a head coach in New England. Though Brady and the Patriots lost that Week 2 game against New York, the team won 11 of their next 14 games to finish at 11-5, a hot streak that propelled New England to a 3-0 postseason run and the franchise’s first Super Bowl win.

Had Brady not kickstarted New England’s offense and gotten the team to win ballgames, it seems highly likely Belichick may have been fired following the 2001 season, especially when you consider he had previously gone just 36-44 in the regular season during five years with the Cleveland Browns. In fact, if you add it all up, Belichick is 54-63 (0.46 winning percentage) in regular-season games where he has not had Brady as his starting quarterback. By contrast, Belichick is 219-64 (0.77 winning percentage) with Brady under center.

While it’s unrealistic to expect Belichick (304-139 overall in his career and 273-127 in just the regular season) to keep winning more than 75 percent of his game as he did with Brady, it certainly seems reasonable to expect him to win more than half of them no matter who is playing quarterback if he truly is the best coach in NFL history.

Belichick did lead a Matt Cassel-quarterbacked team to an 11-5 record in 2008 after Brady blew out his knee in the season opener, and also posted a 3-1 record while then-backups Jimmy Garoppolo and Jacoby Brissett filled in for a suspended Brady in 2016. But while he’s had success in more recent years without his on-field leader, Belichick’s record without Brady for his career still stands at sub-.500.

Related: The Legend of the One-Franchise Quarterback Is Dead

If the Patriots coach, who is chasing down Don Shula for most career wins (347) and most regular-season wins (328), falters without Brady once again, questions may start to arise about whether the GOAT of head coaches was perhaps more reliant on his GOAT quarterback than we initially thought. With Brady no longer in New England, it’s clear that Belichick, and not his longtime quarterback, is the one with more to lose this season.

Of course, there’s always a possibility Belichick will make a surprise move and add a franchise quarterback like Cam Newton, who is being released today by the Carolina Panthers, according to multiple reports.

Elsewhere in NFL free agency, the Seahawks acquired cornerback Quinton Dunbar from the Redskins in exchange for a fifth-round pick, the Jets re-signed outside linebacker Jordan Jenkins to a $5 million contract worth $5 million and the Ravens re-signed defensive back Jimmy Smith to a one-year deal.

In a trio of other moves, the Seahawks signed 27-year-old wide receiver Phillip Dorsett, formerly of the Patriots, to a one-year contract, the Redskins inked Peyton Barber, formerly of the Bucs, to a two-year deal worth $3 million and the Panthers agreed to terms with speedy ex-Jet WR Robby Anderson to a two-year, $20 million contract with $12 million guaranteed.

In Vegas, though it was already agreed to, Marcus Mariota officially signed his two-year, $17.6 million contract with the Raiders. With $7.5 million in guaranteed money, the deal is sizable enough that the Raiders should give Mariota a good chance to compete for the starting job against Derek Carr.

In a surprising move in Dallas, five-time Pro Bowl center Travis Frederick announced his retirement from the NFL after seven seasons playing for the Cowboys. A former first-team All-Pro selection, Frederick just turned 29 years old last week. With Frederick gone, the Cowboys will now move forward with Joe Looney at center for now.

Finally, in Washington, Vincent Taylor, the agent for left tackle Trent Williams, told the Redskins it’s in the team’s “best interest” to trade or release his 31-year-old client. Though Williams is under contract, it seems unlikely he plays unless the team awards him the $20 million annual salary he is reported to be seeking.

Take 50% Off Button-Downs and More Warm- Weather Wear at J.Crew