It’s Officially the Summer of the Adidas Samba

The three stripe classic has always been here — but now it has truly arrived.

The Adidas Samba is officially having a moment. Splattered across Instagram explore pages, perpetually sold out online, spotted in the wild on the tootsies of downtown hotties. And the moment is not fleeting —  the iconic German sneaker has been gaining traction for months (some might argue years), and, by all accounts, we are witnessing firsthand the apex of the long-running style. Yup, it’s the summer of Samba.

A vintage sneaker enjoying a meteoric rise isn’t anything new; kicks like the Nike Blazer ‘77 Mid (or Air Max 97 before it) or the New Balance 550 are living proof that the mix of decades-proven style and red-hot designers (see: Aime Leon Dore’s Teddy Santis) is in high demand.

The Samba feels a bit different, though. It’s not some archived style or beloved remake; the Adidas model is actually the company’s oldest style, maintaining a place on shelves and on feet for over 70 years. Originally conceived by founder Adi Dassler as a frozen ground training shoe for Europe’s futbolistas — hence the “suction cup” sole — the style has been the longtime standard footwear for soccer organizations a là FIFA, and has made inroads in the likes of the skate community for its durable suede outer and grippy gum sole. In fact, it’s the third best-selling Adidas shoe of all time; while you have to account for the plethora of years it’s been on the market, it’s still a baffling statistic for a normally less-than-celebrated sneaker.

That’s not to say there hasn’t been mainstream culture crossover — Bob Marley pioneered the style throughout his lifetime, just as the Samba Super was a shoe of choice for the Gallagher bros in the 1990s. The point here, however, is that for its historic past, the Samba has (or had) remained relatively, off the radar. While hallmark styles with the three stripes — namely, the Superstar and the Stan Smith — dominated casual markets, the OG style toiled in relative obscurity, until recently.

So, what changed? Why are there a pair of the sneakers on every street corner in Bushwick? The most obvious answer seems to be the influence of British designer Grace Wales Bonner. Incorporating her Jamaican roots into decidedly British endeavors — formal tailoring, dance-hall style tracksuits, and classic soccer-inspired style — the CDFA-awarded Brit released a collection of Adidas footwear including a (you guessed it) subtly crocheted Samba to massive acclaim in November 2020, single-handedly reinvigorated the style. Each subsequent Wales Bonner drop has sold out, with the Samba styles, in particular, fetching double and even triple their original value of resale markets like Grailed and Stock X.

It’s hard to parse out the chicken-or-egg origin, but there’s no denying the profound notoriety that the Samba received in the months since. Frank Ocean is now a fan. Blokecore’s blowup on TikTok has roped the Samba into a footwear champion in the digital space. Jonah Hill’s laid-back take galvanized film bros and fans of Superbad alike. The effect that anything she does has on the culture ensured loads of Samba converts when Queen Riri donned the style.

The widespread love has encouraged a general reconsidering of the Samba, and for good reason. At its base the Samba is a simple, versatile white trainer…aka, the bread and butter footwear of any good ensemble. The vintage tread and futsal suede styling are very much in line with the recent ‘70s fascination that’s gripped high-fashion and wide-scale retail alike. It’s a timeless style, one that pairs well with everything from high-waisted jeans and a close-cut tee to a billowy bespoke suit. And best of all, it’s available to everyone. No need to cue for 14 hours online, or blow hundreds of bucks for an exclusive drop; you can just pop into your local department store and snag a pair.

Of course, with so much hype, there’s bound to be some burnout. There’s the not-completely unwarranted suggestion, as is typical with a hyped style, that the Samba is spent. To this, we say, find us another low-profile, comfortable sneaker with some signature retro flair, and we’re all ears. For now, we’re contented wearing ours with everything and anything. Maybe you should grab a pair, too?

Join the Summer of Samba 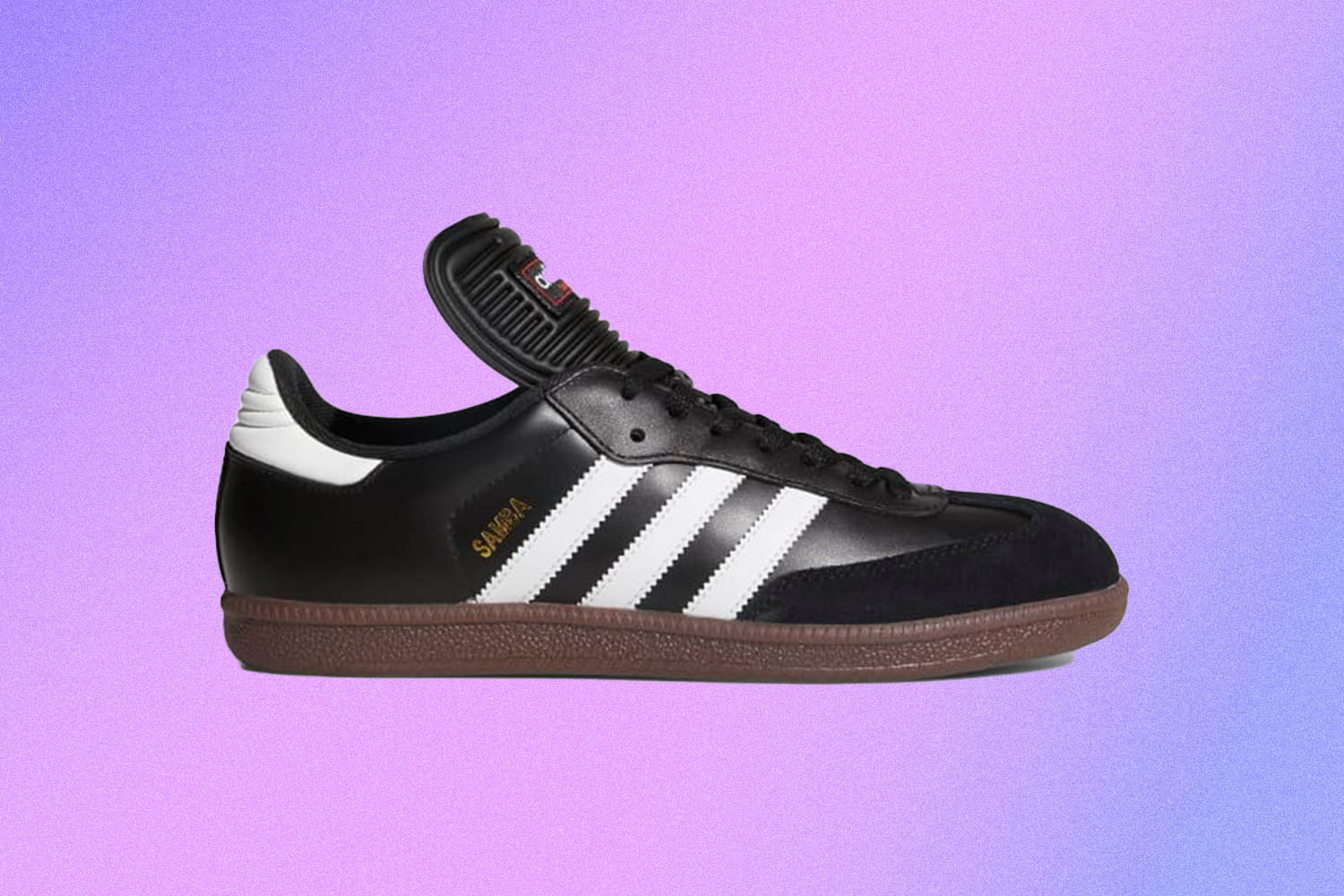