Jaws Made Most Movie-Goers Afraid of Sharks, But Inspired Wave of Marine Biologists

Like millions of Americans in the summer of 1975, Greg Skomal was powerfully affected by watching Jaws on the big screen.

Unlike the vast majority of movie goers, however, the 13-year-old felt the urge to run towards the ocean after leaving the theater in Fairfield, Conn., with his brother and buddies. Seeing that shark proved chum in the water for someone now working as a senior marine fisheries scientist working for the Massachusetts government.

“For me, the film was inspirational,” Skomal recalled to RealClearLife. “I thought it was obviously a great story and a great thriller, but it involved sharks and I thought it was an amazing animal even though it was supposed to be the villain.

“I remember thinking (Richard Dreyfuss’s character) Matt Hooper, the marine biologist in the movie, had the best job on Earth. It definitely helped push me in the water to become one myself and study sharks in particular.”

And Skomal has since realized that he wasn’t the only one to fall in love with the real protagonist of Jaws.

“It’s certainly outnumbered by the number of people who never got into the water again,” he said, “but there are a fair amount of marine biologists who were inspired to go into the field.” 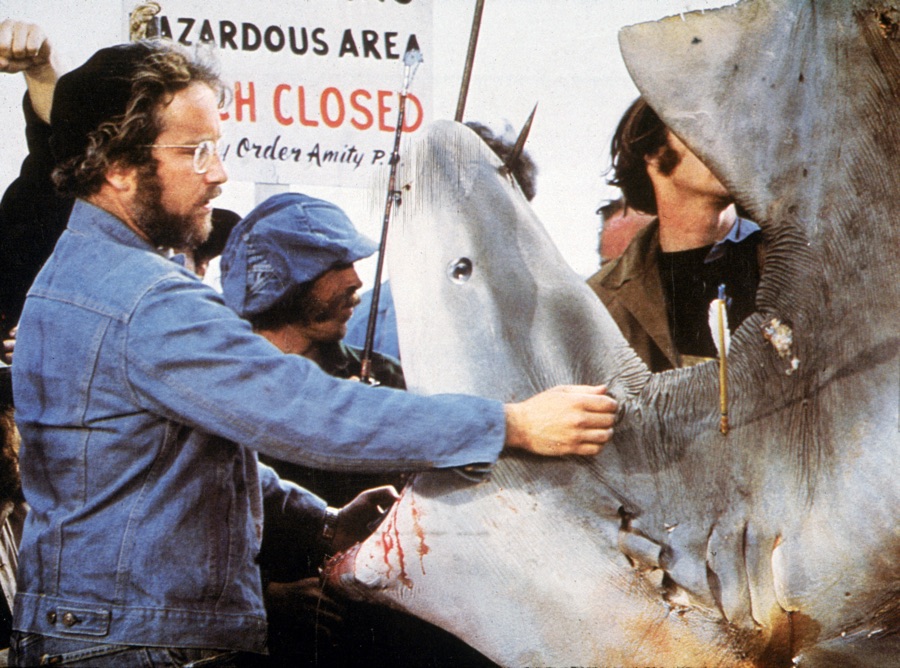 For the most part, though, director Steven Spielberg’s blockbuster has been a P.R. disaster for sharks—perpetuating the myth of the great white in particular as a relentless killing machine.

It’s impossible to overstate the impact Jaws had beyond pop culture in 1975, says movie historian Leonard Maltin. Adjusted for inflation, the movie is the seventh highest grossing domestic release of all time, and the first so-called blockbuster with ticket buyers lined up around the block outside theaters to see it over and over again. Standing in line again that summer sure beat the alternative of heading to the beach and thinking about the sharks that could be lurking under the surface.

“My wife, who is a lifelong swimmer, refused to go into the ocean,” said Maltin, who blogs on movies at leonardmaltin.com. “Multiply that by many thousands or millions.

“It was a very hot topic of conversation that summer,” he added. “It really had an enormous impact on our society and specifically on people’s outlooks of the safety in the water.”

Skittish beach-goers proved the least of great whites’ concerns; while some gravitated towards Hooper when they left the theater, others romanticized the image of Robert Shaw’s great shark hunter.

“It made people afraid of sharks which in turn made it easier to kill sharks,” said Dr. Chris Lowe, director of the Cal State Long Beach Shark Lab.

“When i look through fishing records, you see a big spike in landings of great white sharks all around the world in 1975, 1976 and 1977 so clearly connected to the movie.” 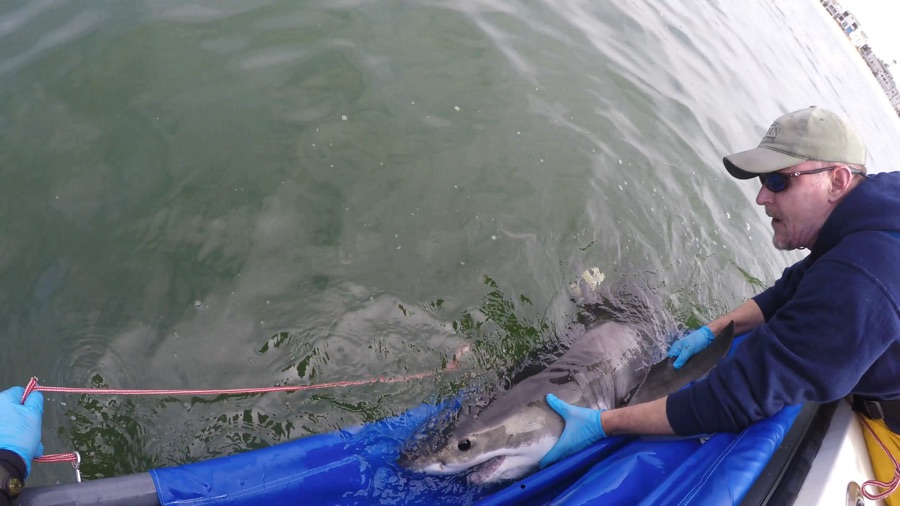 Even Peter Benchley, who wrote the novel on which Jaws is based, felt remorse later in his life at the damage the popularity his book might have done to the animals he came to respect. As a New Jersey resident, he worked with the Princeton-based Shark Research Institute as an advocate in his later years.

“He used to ask, ‘Do people not understand they bought the book in the fiction section,’” recalled Marie Levine, executive director of the Shark Research Institute and a friend of the late author. “He said afterwards when he did actually become an expert on sharks, that he was kind of embarrassed by Jaws.”

Lowe points out that the rogue killer image still hurts great whites in Australia, where government officials pushed for a cull after a spate of shark attacks. The difference, however, is there is now coming outcry from a better-educated public over the indiscriminate killing of a vulnerable species.

As the product of an old New England whaling family who grew up on Martha’s Vineyard while Spielberg was shooting Jaws there (Jeffrey Voorhees, the kid who plays poor, doomed Alex Kinter, was a classmate), Lowe certainly wants to appreciate the thriller. But as the descendant of whalers, he also knows how much the whole Moby Dick myth helped to contribute to the image of whales as destroyers of boats and drowners of men. “They were considered killers. They were considered demonic. So it made it easy to rationalize killing them,” said Lowe.  “It wasn’t until around the mid-70s that whales got a complete makeover.”

Now, whales are seen as gentle giants, and whaling is illegal in most waters in the world. And Lowe hopes the tide will turn similarly for sharks.

That doesn’t mean it’s fair to blame Jaws for causing anything more than spilled popcorn in the first place, said Skomal.

“There’s a primal fear of those animals that can potentially harm us and Hollywood producers have been making money off tapping into those fears long before Jaws,” said the marine biologist. “That’s exactly what Spielberg did. That’s exactly what Benchley’s script did.

“People didn’t suddenly go out of the theater and say I’m going to kill sharks,” he added. “No fisherman is going to say, ‘I did it because of Jaws.’ They did it for the money.”

An estimated 100 million sharks are slaughtered a year for an insatiable demand for their fins, according to a 2013 study from Canada’s Dalhousie University. It turns out the danger isn’t man-eating sharks; it’s men eating sharks. 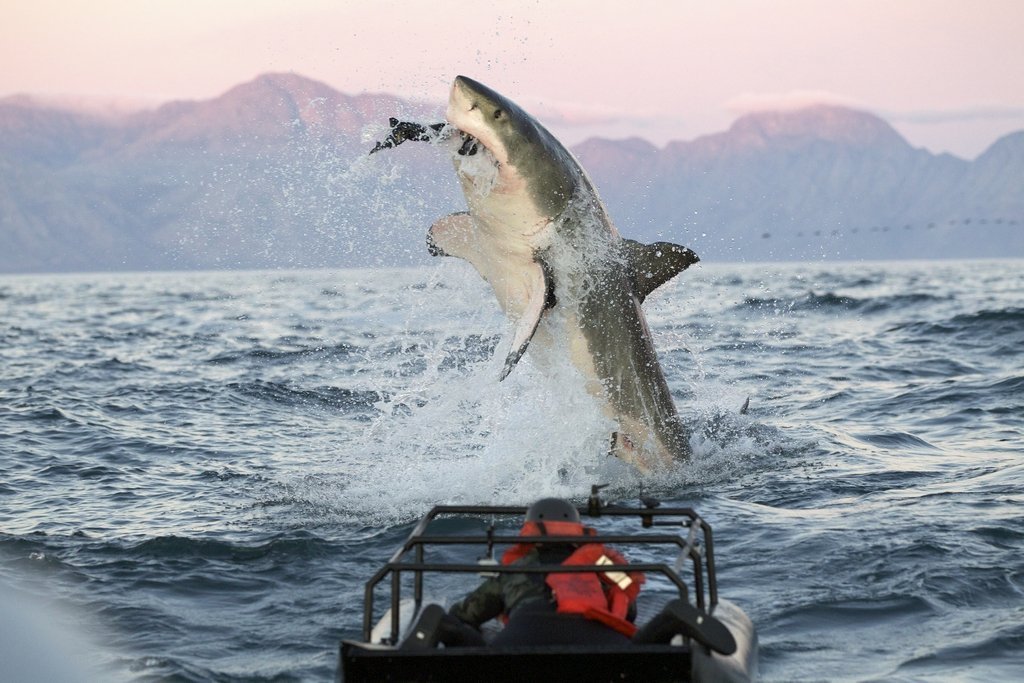 “Unfortunately, it did a huge amount of damage to the image to the shark,” he said, “but on the flip side, it also created an interest in sharks. Many of my guests (to Fallow’s Apex Shark Expeditions cage diving trips) say they had their interests peaked by the film.

“It did raise the interest in sharks to a whole different level and in some ways, a lot of people wanted to get to know the monster they saw on screen,” added Fallows. “To see them for themselves and study them.”

“I’ve been given the nickname of ‘Hooper’ on the docks of Cape Cod from a lot of the fisherman,” said Skomal. “But I’m humble about that.

“There are a lot of Hoopers working in marine biology.”

The Best Bars in Sitcom History
The Best Way to Fly Right Now? Let’s Call It Private-ish Travel.
Where Does “Saturday Night Live” Go From Here?
Who Are the Try Guys and Why Is Everyone Suddenly Talking About Them Today?
The Mystery of the Creepy Smiling People at Baseball Games Has Been Solved

He’s Probably the Best Athlete Alive. Does Anyone Care?
The 7 Best Fall Travel Destinations for 2022
Ex-NFL Coach Rex Ryan Is Having Fun Putting His Foot Fetish Forward
The 5 Biggest Announcements from Amazon’s Fall Launch Event
Saks’ Friends & Family Sale Is the Perfect Opportunity to Save on Designer Gifts
The 6 Essential Tools Your Home Bar Is Missing
Behind the World's Most Ferocious EV Is a 92-Year-Old Classic Car Legend
Review: Ardbeg Latest Is Both Peaty and Tropical
The Best Sweater Vests Are the Epitome of Cool. Here Are 10 to Consider.