Peter Fechter was yards away from Checkpoint Charlie. Just yards and one infamous wall from a whole new life in the West.

But as he and a friend scrambled up the Berlin Wall in broad daylight 56 years ago today, bullets tore through the air from the East Berlin side and struck the 18-year-old in the back. The friend made it the rest of the way, but jarring photos show Fechter crumpled at the foot of the concrete wall – dying with his back to the wall and the West, his head facing east.

“Many people on both sides of the barrier witnessed the tragedy that followed,” a profile on Fechter by the Berlin Wall Memorial says. “The badly wounded young man was screaming loudly for help, but no reaction was taken for a long time on the East Berlin side. Standing on a ladder, West Berlin police officers asked him his name and threw bandages to him over the Wall.”

But the West Berlin officers, and the American soldiers nearby, couldn’t risk a much larger conflict by stepping over the wall to help the teen. The East German police didn’t move to help the teen who lay bleeding out on their side of the wall. 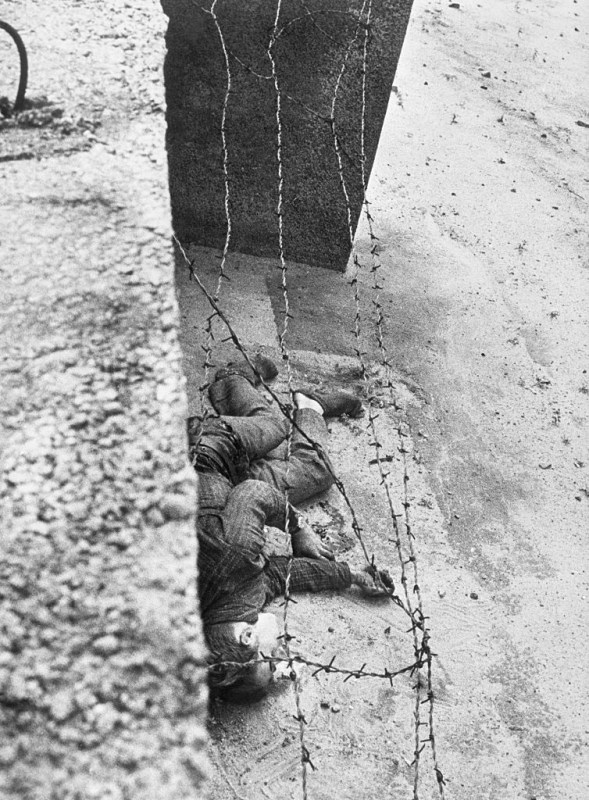 “Hundreds of people from both sides looked on helplessly as the youth […] went through the agony of death,” reads the caption for a Getty photograph showing Fechter on the ground, framed by a side of the rough wall. “His body was removed fifty-five minutes later.”

Another photo shows the clumsy removal of the body, as East Berlin border guards struggled to pass Fechter over reams of barbed wire.

The Berlin Wall had gone up almost exactly a year before, physically dividing the Soviet-controlled East from the American-, British- and French-controlled sectors in the West. By that point an estimated 3.5 million East Germans had already fled across the border. As Leslie Colitt, then a student in West Berlin, wrote in The Guardian, the official reasoning by the Soviets for constructing the wall was that it was needed to “keep the decadent, immoral westerners out, rather than to lock the right-thinking easterners in.”

After a year, Fetcher, an apprentice bricklayer, decided to make his move with a friend, though the two apparently didn’t put too much thought into it.

“It appears that the two youths had hardly discussed with each other their reasons for wanting to flee,” the memorial page says. “They knew that they were both unable to identify with the existing political situation and dreamed of a better life in the West.”

The friend, identified as Helmut K., described the fairly spontaneous jump from an abandoned building, the sprint towards the West and what happened next.

“I had reached the Wall by then, jumped up and forced myself through the barbed wire on the top of the Wall,” he said. “I don’t know why Peter didn’t climb up. He should have been at the Wall before me. He didn’t say anything and I had the feeling when the shots were fired that Peter Fechter was in a state of shock. I called out loudly to him: ‘Come on, come on, hurry up!’ But he didn’t move.”

Police reports later said Fechter had been hit by the bullets just as he jumped for the wall.

Fechter’s death came at an already tense time in Berlin, when the memorial said that “hardly a day or week passed without a bloody incident occurring.”

The slow, tortuous, public death of an 18-year-old threatened to spark a wildfire, perhaps a revolution. For days after the grotesque spectacle, West Berliners took to the streets protesting what they called the brutality of the East.

“Angry mobs of West Berliners stoned and pursued Soviet Army vehicles tonight and clashed with West Berlin police in bloody street fights near the wall that runs along the East-West border,” The New York Times reported on Aug. 20, 1962. “Earlier the rioters stoned a Soviet army bus on the Wilhelmstrasse, just inside West Berlin.”

At one point a Soviet car was so desperate to escape the chaos that it took refuge at an American Army barracks. Back at the wall, groups were reportedly chanting “Mauer muss weg — mauer muss weg,” or “Wall must go — wall must go.”

But for all the protests, the Berlin Wall stayed right where it was for nearly 30 years, even as Fechter’s death was observed on grim anniversaries. He wasn’t the first to die in its shadow either — 23 perished before him. In total, at least 140 people were killed at the wall before it crumbled in 1989.

Han-Dieter Wesa, himself a border guard in East Berlin, took his chance just five days after Fechter’s death. Wesa, too, was shot and killed. He was 19 years old.