Fake News Is On Broadway. What Can We Learn From It?

Reporters and their readers are both responsible for getting at the truth. 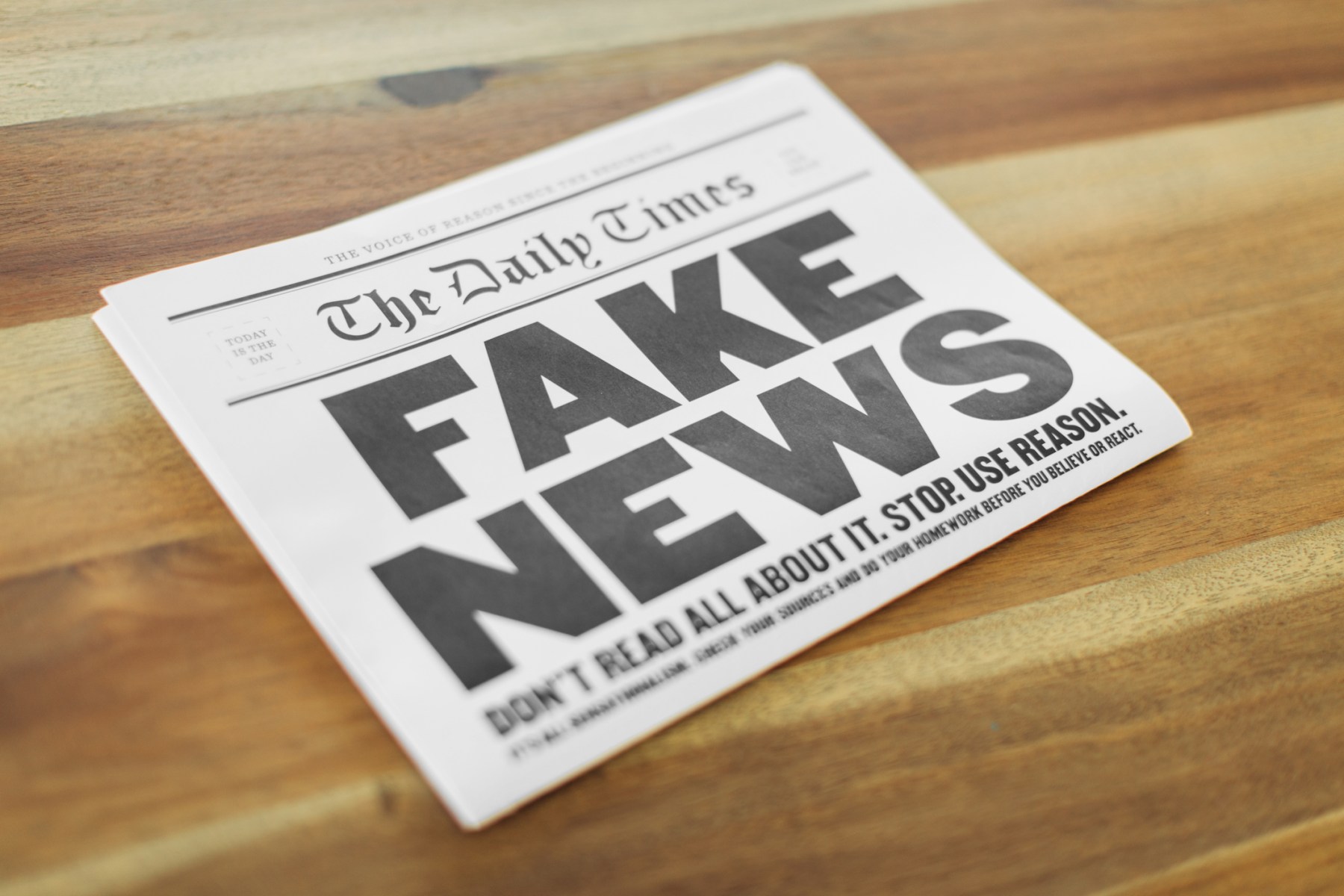 Daniel Radcliffe looks tired. He’s wrapped another night of The Lifespan of a Fact on Broadway, in which he portrays a magazine’s overzealous intern fact-checking an article written by a big shot. Based on a 15-year-old true story, the play is unsettling in its relevancy, with enough new references to Twitter and the spread of misinformation online to keep audiences firmly planted in 2018.

“Do fact checkers make your job easier, or do they annoy you?” asks Radcliffe, eyes fixed on mine, in response to the fact that I’ve told him I’m a journalist. As he inquires, he signs Playbills — first mine, then all around me, swiveling for selfies and greeting people in the yelping crowd as individuals. The former Boy Who Lived doesn’t falter in holding a conversation during this delicate balancing act.

“Neither,” I tell him truthfully. There is no Jim Fingal, the researcher he portrays, badgering me to back up every line I write. Instead, I am like countless other journalists who work with an editor to fact-check ourselves. It’s a reality Radcliffe, who informed his role as a New Yorker fact-checker, acknowledges — “I’ve learned it’s very rare to have a designated department now” — and one partially influenced by media’s changing business model. Increasing demands on journalists to write more stories and faster, with threats of layoffs looming at former heavyweight publications, couldn’t have come at a worse time.

And, unlike Radcliffe’s limited-run Broadway production that packs up and leaves in mid-January, the role of fact-checking isn’t going away. Ever. 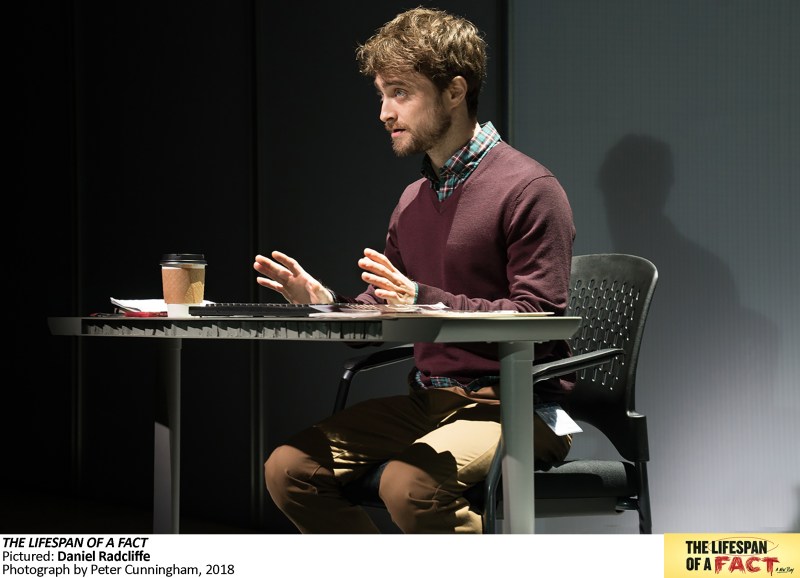 Daniel Radcliffe in “The Lifespan of a Fact” on Broadway. (Peter Cunningham/Polk & Co)

Indeed, since the 2016 election, fact-checking has become as hot of a political issue as any. The media and the Trump administration continuously do battle over White House leaks, the credibility of anonymous sources, and the integrity of tell-all books penned by people promising an inside scoop. There is also the issue of Russian election meddling, which further complicated 2016 and is still an issue today, according to U.S. intelligence agencies. Social media companies like Facebook continue to answer questions from Congress and work behind Silicon Valley doors to keep bad foreign actors from interfering with public opinion and compromising the integrity of future elections on their platforms.

To say it’s overwhelming is an understatement, and a Monmouth University poll published in Politico this year found 77 percent of respondents believe major news outlets spread “fake news.” So I asked fact-checking experts how normal news consumers can get a handle on the true lifespan of a fact — and make sure that politicians in power can reliably be held accountable for the claims they make.

Brooke Borel is a science journalist and the author of The Chicago Guide to Fact-Checking. She got her start as an editorial fact-checker at a magazine and says the job is alive and well — and largely looks the same now as it has in the past.

“I think a lot of people — with all these accusations of fake news — don’t understand how journalism actually works, and don’t know the difference between the editorial pages and news,” Borel said. “Magazine-style, the story will be a near final shape, meaning the journalist and their editor will have gone back and forth several times shaping it and making sure everything flows in the right place. [The] editor will push back on any facts that don’t make sense and might send journalist back to get more info.

“Ideally the journalist will have gone through the draft of that story and annotated it. They will have footnoted or commented on every single paragraph and put a source. Contact info for a source, expert, eyewitness, paper, reference from an interview transcript or recording.”

Then the fact-checker comes in. 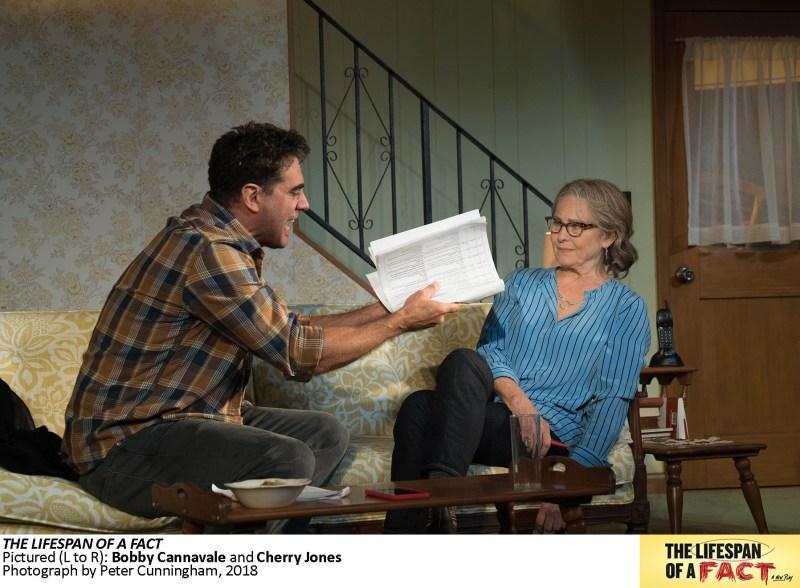 “[They] will go through line by line. They also might be questioning some of the sourcing [if it] seems thin, might go back and re-report some.”

Sometimes, Borel said, they’ll call back all of the sources before bringing their findings to the editor and journalist. In The Lifespan of a Fact, this is where the tension arises, because the writer is creative and doesn’t want to change the “details,” which are really facts fudged for the sake of drama and flow. But in real life, any necessary changes are made, and the story is sent on to a copy editor to polish it for print.

This process can obviously take days, and with 24-hour news crews breathlessly following people like President Trump, the cycle’s biggest story can change within an hour. This method obviously can’t apply to the madness. So how does that work? What does political fact-checking look like?

Lori Robertson is the managing editor at FactCheck.org, a nonpartisan non-profit project by the Annenberg Public Policy Center of the University of Pennsylvania. Robertson, who has worked with the organization since the advent of Twitter, said the organization’s focus is federal offices and national politics — and she believes that fact-checking has actually increased over the years.

“It’s grown in prominence and we’ve seen a lot of news organizations start to do it, whether they have dedicated fact-checkers writing fact-checking stories, or we’ve started to see small fact-checks be part of day to day news coverage,” Robertson said. But she acknowledges it can be “difficult to do that” because it means taking time out of the middle of a daily news story. That’s where sites like FactCheck.org come into play.

“Sometimes there’s a claim you can do that in a sentence or two, but a lot of times it takes a day or two of research and several paragraphs to explain what the talking point is about. I think we really fill a void still in political coverage, we have the ability and perhaps the luxury to take the time to really look into a claim and explain it to our readers.”

And Robertson said they don’t just fact-check politicians — they also fact-check themselves, in the same way Borel explained to me.

“We internally fact-check our stories just like a magazine would do before we publish it on the website,” Robertson said. “Among our staff, they go through the article, double-check name spellings, figures, all the facts there before we put it up.” 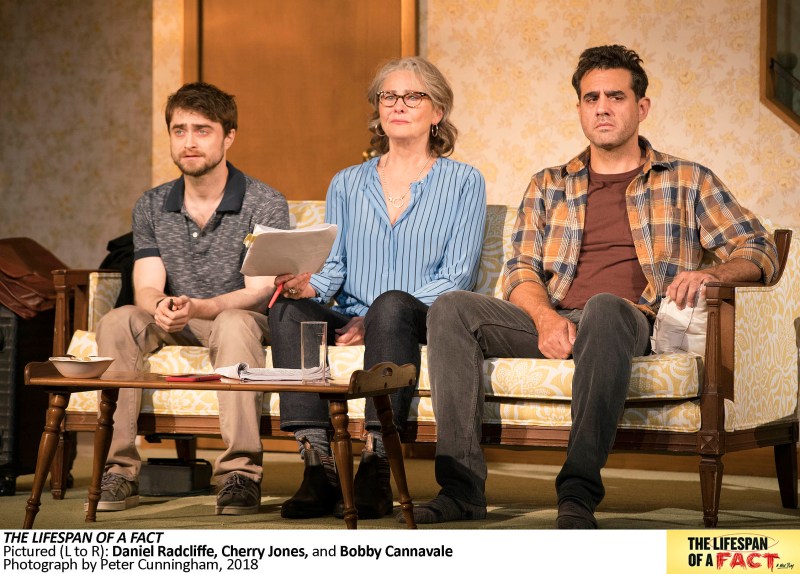 “Lifespan of a Fact” fact-checker, editor and writer sit together in turmoil, arguing over whether or not to run the piece (Peter Cunningham/Polk & Co)

“I wish people understood that there is an actual process in reporting, it’s not just getting tips and writing them — when reporters use anonymous sources it’s not that they shouldn’t be just trusting that one voice, it’s something they’re also corroborating. There are reasons in place to keep some people anonymous, because they might be in danger otherwise.”

It also can negatively affect a reporter’s job. “Ultimately it’s the journalist’s reputation at stake — even if they get little things wrong. If a journalist has a lot of corrections on stories, that can affect their jobs and whether they’re allowed to stay in their jobs.”

But members of the media also should show their work, Borel said. Many reporters and modern-day philosophers have written about the value of building trust through transparency, and Borel is on board.

“Often in stories we’ll say something we know is a fact, but we might not say in the piece how we know every single little thing — citing things more and explaining how we’ve pinpointed certain facts,” Borel said, is a way forward to combat “fake news.”

Now, armed with this information, onto the 2020 election cycle.