My friend Steven and I have been sitting at Kimika for a matter of minutes when our cocktails arrive. A single sip into The Shishitorita, made with Gran Centenario Plata tequila, shishito, lime and mint with yuzu foam, and my brain is already exploding. “Wow,” is all I can muster, and for a few seconds afterward I’m completely silent, every tang, every herb, every nuance coursing over my tongue. I have sipped and nibbled across the country and even the world at this point, but I’m quite certain this is the best cocktail I have ever had. I stare down at the green drink in the highball glass, sitting unadorned on a white cocktail napkin atop a petite grey marble table, and I am fairly certain that whatever else is coming next is bound to be equally breathtaking. And you know what? I’m not wrong.

The Japanese-Italian restaurant, from co-founders Erika Chou and Doron Wang of Rivers and Hills Hospitality Group, has been open since August with Executive Chef Christine Lau, desserts by Clarice Lam and drinks by Greg Kong. While Japanese-Italian food is unusual to us in the U.S. in general and in New York in particular — the long-running Basta Pasta is another staple of the genre here — it’s a style of cuisine that’s flourished in other parts of the world. Chou herself had tried it in Hong Kong and in Japan and saw the possibility to pique interest in something new here in the city, especially in its Nolita neighborhood where cultures are literally woven together on the street. The idea for Kimika had been in the works since December 2019, with a March/April opening originally anticipated. But then, well, 2020 happened, and August became the new opening slot. It’s given Kimika a different outlook than some of their other restaurants like Wayla, also downtown.

“I think focusing a lot on the experience overall has been really important, especially now. It means a lot when a diner, during a pandemic, comes to our restaurant. It shows they really trust us and want to support us and we definitely want to do our best for them,” Chou says. “We had to focus a lot on the visuals and design and decor because people aren’t just walking around like, ‘Oh, let me check this place out.’ They really are looking at online sources and reading and whether that’s through Eater or Instagram or whatever they’re looking at, so I think it has to be eye-catching enough in that way for people to really choose to come out to dine.”

Indeed, Kimika is sleek and modern, but not in a trendy, annoying millennial way. Nothing is pink for no reason. The design is minimalist enough that you notice the food even more. And good lord, how delightful it is to notice.

“If you came to eat, I would want you to eat six to eight different things. Finish it all, don’t finish it all, take it home but to be able to have each bite to be almost like its own, its own flavor profile,” Chef Lau says. “It’s almost like each bite is its own dish, so it’s a continual overflow of different flavors during the journey of your meal here.”

Seaweed grissini is crisp with magical, marine flavors. Slices of summer squash are elegant on a pizzette fritte with shiso-sunflower pesto, fennel pollen, chamomile and chili oil. Shisito peppers are stuffed with plump, salty Italian sausage and sweet soy. Four different types of roe (ikura, bottarga, mentaiko and tobiko) make for a sumptuous and creamy spaghetti entree. For dessert, mochi bomboloncini are served warm and sinfully, bursting with a decadent helping of Nutella. A Yakult soft-serve ice cream, made with the sweet Japanese milk drink of the same name, is alive with roasted strawberries and — wait for it — crispy chicken skin streusel so perfectly salty-sweet we ask for more. Steven, who is lactose-intolerant, dives in to the parfait with me, throwing caution to the wind — and he’s glad he did.

Course after course, each dish is thoughtful and thought-provoking, some a blend of Japanese and Italian flavors, others more one than another, others playing with the possibilities beyond those spaces, incorporating influence from other cuisines. “Bringing our own perspective to the concept is how we make it a little special,” Chou says. I wonder both how the concepts arose and am excited for what might come next. Though “Wow,” does happen a few more times, Steven and I are fairly speechless (in a good way) throughout the meal. Many moons ago I had a favorite restaurant in New York and was devastated when it closed (RIP The Toucan and the Lion), but there are few meals in the city I have enjoyed as much as this one since then. I vow to return for my birthday in a few weeks.

But the menu becomes exciting not just for the blend of flavors, but for how it also functions as an autobiography of Chef Lau. Lau has spent her career in both Italian and Japanese kitchens, as well as those specializing in seafood, Spanish cooking, and other East Asian flavors. There are elements of her travels, home bases and relationships to food spread throughout the menu: Korean influences from visiting K-Town — where the restaurants are open late, and thus frequented by chefs — are alive and well in Kimika’s Crispy Rice Cake Lasagna accented with kimchi. A Hainanese-style ginger scallion sauce she loved so much as a child she’d eat it by the spoonful makes an appearance in a salsa verde served with a whole grilled branzino. She became enamored with tuna bottarga after being introduced to it by a Sicilian roommate, and the delicacy appears in the aforementioned roe spaghetti. Shishito peppers stuffed with sausage are prepared yakitori-style, not unlike some of the dishes at her previous restaurant, the now-closed Bar Chuko in Brooklyn. The mochi bomboloncini are the result of her friendship with Kimika pastry chef Clarice Lam, and represent their take on both the fried sesame balls made for Chinese New Year and the Ferrero Rocher candies popular as gifts among Chinese families when they were growing up.

Lau’s menu is a story of her life, but it’s also a story of the pandemic. She removed a large portion of the seafood she had originally planned, instead adding items that could easily travel for takeout (like the pizzettes) or even enter the retail space (like the bomboloncini, which people can order several of for birthdays or celebrations the way one might go elsewhere for cupcakes). Much of the food is local, too, as Lau prefers to work with people she knows she can support — 80 percent of the produce comes from local markets, she says, and she also uses foods from places like DiPalo’s Fine Foods, where she gets her stracciatella.

“We all have to really come together and form partnerships as best as we can,” she says. “We have to support each other or we’re not all gonna make it. It’s a crazy time in the world.”

A crazy time that’s allowed for some interesting experimentation nonetheless. Kimika has since expanded to brunch, populated by dishes like “Matcha Mochi French Toast with vanilla custard, condensed milk, and citron syrup,” “Porchetta Panini with Chinese broccoli, and provolone on seaweed focaccia, served with a miso dip,” “Tsukemen Carbonara with guanciale, pecorino, pink peppercorn and scallions,” and even a vegan soft-serve black sesame sundae with house-made granola for Steven.

As winter looms, Lau looks forward to playing with seafood some more, perhaps with a lobster pizza and heartier cioppino-inspired stews, as well a “braised pork and yuzu ragu-y pasta type thing,” desserts that venture into Creamsicle territory, and more, she tells me on the phone. I am swooning already.

“I look at the food every day,” Lau says, “but when it’s perfect, I’m like, ‘This is so freaking good.’ I get so excited, I feel so lucky I got one noodle out of it and then I hope whoever’s eating this feels the same excitement that I do because this is so good! It’s absurdly delicious. If I got it at a table, I’d be so happy.” 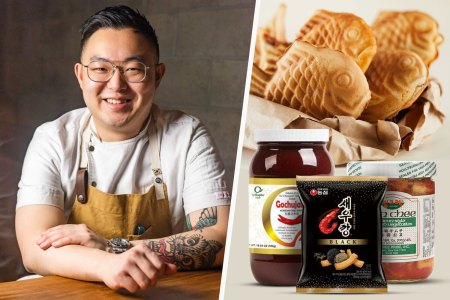