From Russ & Daughters to Sylvia's, these shops have been keeping it in the family for generations 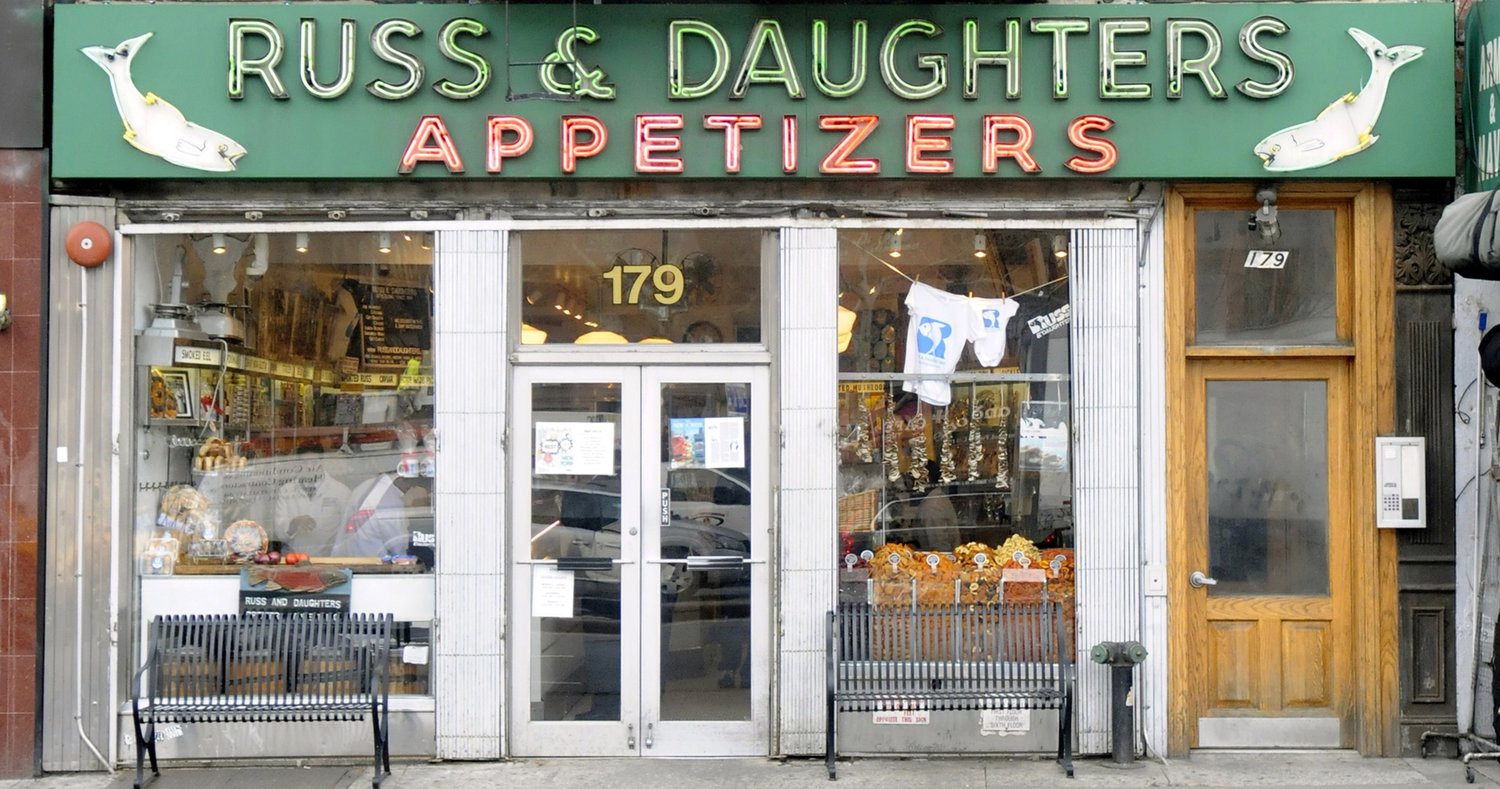 There’s a reason “just like Mom used to make” is such high praise for a meal. No matter where we come from or what we’re eating, tradition plays a huge role in our comfort food. Recipes that have been passed down for generations help to ensure that our matzah ball soup (or our fried chicken, or our cannoli or our paella) taste just right, like what we grew up chowing down on.

Perhaps that’s why family-owned food businesses remain such an important part of New York’s culinary makeup. You start buying your fish from a certain shop because that’s where your bubbe bought hers, and eventually, their family becomes a part of yours. But as rent continues to soar and more mom-and-pop shops are pushed out to make room for high-rises, it is increasingly difficult for a shop to stay in the same family’s hands for generations.

These five have managed to not only endure, but thrive — in some cases, expanding to new locations. Their food isn’t just family tradition anymore; it’s part of New York City’s history.

What started with a Jewish immigrant selling herring out of a barrel has become an empire of sorts. The original Russ & Daughters storefront — a Lower East Side institution — is still going strong, but in recent years, the fourth generation of the Russ family, Niki Russ Federman and Josh Russ Tupper, have opened Russ & Daughters Cafe locations on Orchard Street and at the Jewish Museum, Russ & Daughters Bakery and most recently, the Russ & Daughters Appetizing Factory at the Brooklyn Navy Yard.

The family and the store are currently the subjects of an exhibit at the American Jewish Historical Society, “Russ & Daughters: An Appetizing Story” (which will run through January 2020). At the opening night, Russ Federman insisted that while she and Russ Tupper are trying to modernize and expand the family business, preserving its history is just as important.

“I think we’re the generation that has to straddle these two missions, which is preserving 105 years of tradition but then also keeping it alive, keeping it relevant,” she said. “And so that’s what’s always at the forefront of our minds in everything we’ve done.”

Beyond serving up the most famous lox in the city, Russ & Daughters holds the distinction of being the first American business with “& Daughters” in the name — something that was shocking in 1934 when Joel Russ changed the name to reflect the fact that he was running the store with his three daughters. “It’s a very powerful thing, even in 2019 still,” Russ Federman said. “I remember my great-aunt Hattie talking about she remembered when he changed the name to Russ & Daughters and how people would stop him to offer him a piece of advice. You know, ‘Mr. Russ, why would you do this? Why would you ruin your good business?’ It was very controversial.”

This old-school Italian bakery in the East Village celebrated its 125th anniversary earlier this week (Sept. 23). Originally opened by Antonio Veniero as a candy shop that also served espresso and biscotti in 1894, it eventually was converted into a home for every type of pastry you could possibly imagine. (They’ve got over 150 varieties, but you can’t go wrong with their cannolis or their ricotta cheesecake.) The shop has remained family-owned throughout its history, and it’s currently run by Veniero’s great-nephew Robert Zerilli, who lives in an apartment above the store.

The legendary bakery was a favorite of Frank Sinatra’s, and that’s not its only musical connection. Bruce Springsteen is a distant cousin of the Zerilli family — his great-grandfather’s brother was Andrea Zerilli (Robert Zerilli’s grandfather). Zerilli recalled meeting the Boss in an essay, writing, “I was so star-struck! When I told my dad about meeting Bruce, he wasn’t impressed. He said Frank Sinatra got his pastries from our shop and who is more famous than him?”

This German butcher shop and market has been operating in Yorkville for over 80 years. Opened in 1937 by Ferdinand Schaller and Tony Weber, the store serves up sausages, smoked meats and charcuterie, and their expertise has been recognized far beyond New York City. In 2000, Schaller & Weber entered 20 of its products into Austria’s Welser Volksfest and took home 14 gold and six silver medals, becoming the first American meat purveyor to do so.

Currently run by Ferdinand Schaller’s grandson, Jeremy, the store has been in the family for three generations, and while developers have offered to buy the building that houses it — for as much as quadruple the market value of the property — in the hopes of building a high-rise, Schaller has turned down every one. “This store is iconic, and its aesthetic would be compromised if we knocked down the buildings,” he told the New York Times.

Founded in the Bronx by Joseph Zaro, a Jewish immigrant from Poland, in 1927, Zaro’s is now in its fourth generation. The bakery — famous for its black-and-white cookies — has expanded beyond its original spot to 10 locations spread across the greater New York area. It’s now run by Joseph Zaro’s great-grandsons, Michael, Brian and Scott, but all three admit it took them a while to decide to join the family business.

“I was encouraged to go and explore other avenues and didn’t think I would work in the family business,” Michael Zaro tells InsideHook. “My choice to come and work with my family was very emotional. I was in a transitional phase in my career and happened to have visited the bakery. There was a real feeling of home, and I knew I had to explore those feelings.”

That feeling of home is something Brian attests to as well. “When I was young, I remember entering our factory in the Bronx and making a beeline to the room where we kept all of the plastic decorations for custom cakes,” he recalls. “They used to have sports figures, clowns and all sorts of decorations. I thought it was the greatest thing ever. I had my own Toys-R-Us.”

Of course, working with family can be complicated, and having your business and home life so closely entangled can get tricky. “I think that anyone that says there aren’t any cons with working with family is full of shit,” Scott says. “When you inject the family aspect into business, it becomes very emotional. I believe the pros substantially outweigh the cons, however. The fact that our business, our brand, and our family has remained so strong for 90-plus years is an immense accomplishment.”

This Harlem soul food institution has fed countless celebrities, dignitaries and even presidents; a photo of Barack Obama dining with Al Sharpton at the restaurant now hangs proudly on its wall. Opened by Sylvia Woods — also known as the Queen of Soul Food — in 1962, Sylvia’s also hosts live music on Wednesdays and serves up gospel brunch on Sundays.

The restaurant has expanded from just 35 seats to a hall that can now fit 450, and during the Civil Rights era, it became more than just a place to enjoy some good eats. Woods became a community icon, so beloved that in 2014, the corner of W. 126th Street and Lenox Avenue was co-named “Sylvia P. Woods Way.”

Sylvia passed away at the age of 86 in 2012, sadly, but the enterprise — which has expanded over the years to include a catering service, a line of food products and two cookbooks — continues to be run by the Woods family. “Her spirit is so alive in this restaurant,” granddaughter Tren’ness Woods-Black told Eater. “That keeps her legacy going.”