Race cars from the future, pre-parties, BBQ and more 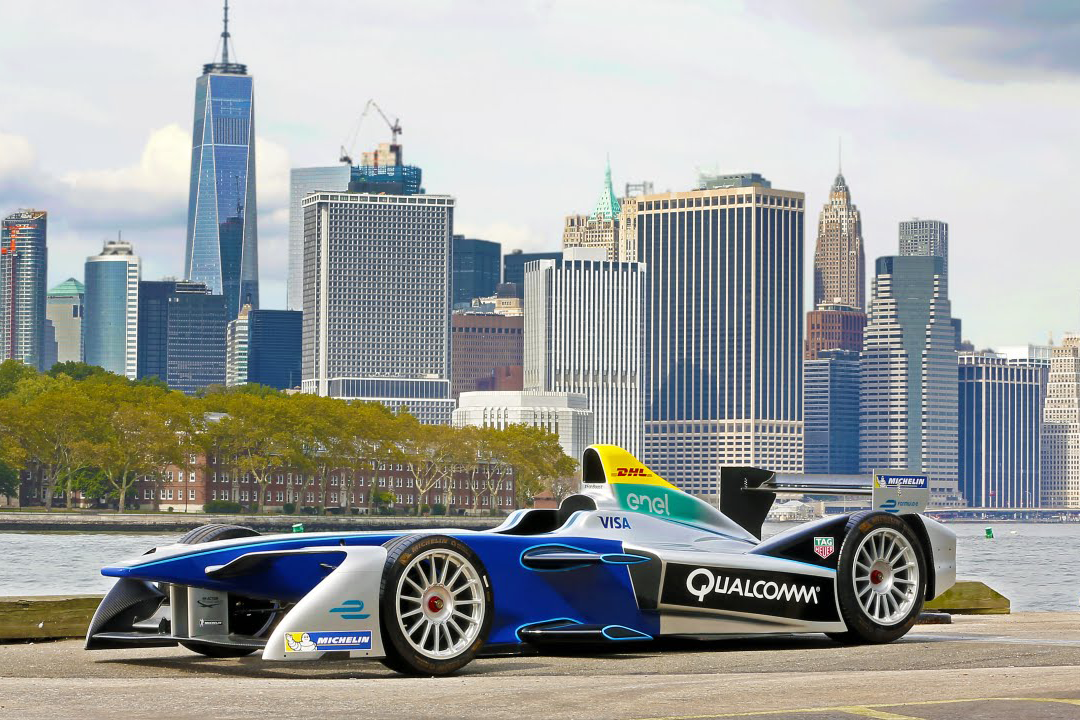 It’s the first major auto race to come to the city since the Cart PPG Cup (an Indy Car series) discontinued its Manhattan stop in the 1980s, and we shouldn’t have to tell you that it is a very fine and fun way to spend a summer day.

Below, you’ll find a brief prep covering everything a beginner needs to know: where to watch, drink and eat, the rules of the road track, and also how to snag tickets to a special pre-party giveaway with the FIA Formula E Chairman, Alejandro Agag, the Don of ePrix himself.

Formula E is an open-cockpit, single-seat race series using electric-powered vehicles. The big names competing include Jaguar, Nissan, BMW, Audi, NIO and more. And the competition is steep, as each team uses identical batteries and equal allotments of energy. This means driver skill and engine design is key. Additionally, each team may only use four new front and rear tires throughout the weekend, and they must be Michelin 18-inch, all-weather, specialized rubber. Burn ‘em out and you’re out of the running.

Each e-Prix race lasts 50 minutes and won’t come with the wallet-demolishing cost to attend that Formula One does. Tickets run $12; it’s racing for the people! And it’s an inventive testing ground for the future of what we’ll be cruisin’ in on the foreseeable horizon.

“Formula E is the future of racing,” said Sylvain Filippi, Managing Director of the Envision Virgin Racing Formula E Team. “Despite its relative infancy, it is showcasing the true potential of electric vehicles which many people simply don’t realize. For too long people have viewed electric cars as slow or boring, but Formula E is changing that by racing at speeds of more than 170 mph on city-center racetracks all over the world.”

Because ePrix is easy on Ma’ Earth and relatively quiet, the tracks are set up smack-dab on streets in the middle of cities worldwide. The result is seriously tight tracks, heaps of action and a very cool cityscape backdrop. New this year: Attack Mode. On each driver’s steering wheel, they have a turquoise button that gives the car a boost to pass someone or maintain a lead. But the uses are limited. It’s like the NOS boosts from Need for Speed brought to life.

There’s also a fan component to the races. Three of the 22 drivers can get a boost in power (100kJ of energy) when spectators upvote them by tweeting for the driver using the tag #FANBOOST. Think Mario Kart’s lightning strike, but crowd-sourced.

“As a driver, [ePrix] has to be one of the most competitive championships there is,” said Sam Bird, race driver for the Envision Virgin Racing team and a two-time winner of the New York City Formula E race. “The racing is super close, the drivers are some of the best in the world, the cars are difficult to drive, the race tracks are in some of the world’s most iconic cities … and, even the fans get to vote for their favorite driver to give them an extra power boost! What’s not to love?!”

On Friday, July 12th, Converge is the place to be. Held at Pioneer Works, it’s an all-day (free) experience at the apex of tech, auto and art with some of the leading minds in EV motorsports culture on board, including Formula E head honcho Alejandro Agag. There are panels on the future of transportation and the technology of racing along with epic art installations and VR workshops. To boot, the night brings a special live performance from Glaswegian pop outfit CHVRCHES.

And we just happen to have two VIP tickets for the taking, including guaranteed entry to the show and two gratis drinks. To win, just: 1) Follow @insidehook and @outposttrade on Instagram, and then 2) Repost this with the hashtag #CONVERGE2019.

Unless you’ve purchased an awesome, massive fixer-upper warehouse in the area, you don’t get out to Red Hook nearly enough. Since you’ll be making the trek, it’s an excellent time to explore the blossoming Brooklyn hood.

For eats, you’ll do no better than Hometown Bar B Que. But if you’re not feelin’ the big heavy of ribs in summer, stop in at Grindhaus for some southern comfort or Red Hook Lobster Pound for a flight of their six different lobster rolls. Yes, we just decided lobster roll flights are a thing.
For drinks, you’re in good company. Red Hook is a dive-bar haven. Seasoned locals will point you towards Brooklyn Ice House and Sunny’s for the finest PBR the borough has to offer. But if you’re too fancy for that, there’s the middle ground Van Brunt StillHouse, a small-batch distillery, or 1 Hotel Brooklyn’s rooftop and Cecconi’s Dumbo House if you’re craving a view.