How Hair Metal Band Mr. Big Wrote One of the Greatest Love Songs of the ’90s

The story behind 'To Be With You' told by songwriter Eric Martin.

According to Merriam-Webster, the term “earworm” dates back to 1802—but it might as well have been coined in 1991. That December, in the twilight of the hair metal era, Mr. Big released its single “To Be With You.”

It all went down at a particularly fortuitous two years in rock history. Three months before Mr. Big releasing the single, a little-known band from Seattle named Nirvana had dropped its second album, Nevermind, and first single “Smells Like Teen Spirit,” which all but changed the face of recorded music.

But Nirvana’s album and single weren’t an immediate success, and it allowed hair metal holdovers like Mr. Big to sneak in a few final morsels like “To Be With You.”

Formed by bass virtuoso Billy Sheehan in 1988, fresh off backing up ex–Van Halen lead singer David Lee Roth, Mr. Big was basically a dream team. Besides Sheehan, it included Racer X’s Paul Gilbert, a nimble-fingered guitar god; drummer Pat Torpey, whose résumé at the time included skinsmanship for Ted Nugent; and Eric Martin, a well-respected and mega-piped vocalist, who’d been a mainstay on the West Coast club scene for decades.

After a well-received self-titled debut album in 1989, the band returned two years later with Lean Into It. If you’re unfamiliar with Mr. Big’s back catalog and signature sound, it’s way more Guitar Hero than “To Be With You.” So their biggest single of their career was a happy accident.

That’s likely why, when the band hooked up last year to record their ninth album, Defying Gravity, Gilbert brought the band an absolute moon-shot of a shredder called “1992,” which is a semi-autobiographical, tongue-firmly-in-cheek reading of the band’s big hit. He roasts “To Be With You” in the chorus:

“Thought about a girl that I once knew/put her in a song with some greens and blues/wore somebody’s shirt that I didn’t choose/but the fans were screaming so I couldn’t refuse/record company said to us, ‘Thank you, man’/and then they threw us right into the garbage can/But the good people listened and they pulled us through … I was No. 1 in 1992.”

Twenty-five years later, the band’s obviously still together and thinking about that tune. They even brought back Lean Into It‘s producer, Kevin Elson, to man the controls on Gravity. And if you’re itching to dust off your old Ratt T-shirt and leather jacket, Mr. Big is currently on tour supporting the new album, which officially hits stores on July 21.

When RealClearLife called lead singer Eric Martin, he was at Mohegan Sun casino in Connecticut, just six shows into the tour. “I’m just now starting to feel comfortable singing the words of ‘1992,’” he told us. Below, Martin gives you the unabridged story behind “To Be With You.”

“I wrote the song when I was a kid, and then I got a publishing deal, and I finally got to get off my father’s couch in his house. I made a little publishing check, and they hooked me up with this guy named David Grahame. He was a bass player and in a play called Beatlemania. He was kind of a Beatle-head.

“When we first got together, he goes, ‘Well, what have you got?’ Anytime you write with anybody, it’s 50-50 all the way. I said, ‘Man, I have this song. It’s called ‘To Be With You,’ and it was pretty much the nucleus of the song—but it was Crosby, Stills, Nash & Young–sounding. He said, ‘Let’s do it like ‘Give Peace a Chance.’ [mimics the beat of the song] That little [suggestion he made] was brilliant.

“[The original demo] was piano, acoustic guitar, [and] that ‘Wild World’ drumbeat. Legend has it that Cat Stevens stepped on his guitar case [for the beat]. We had a bass drum or a suitcase, handclaps, and a piano. I played piano, David played acoustic guitar, and we just added all these harmonies. Mr. Big didn’t [really] do anything different except that awesome solo by Paul Gilbert.”

How It Got on ‘Lean Into It’ and the Radio

“Our manager [was] Herbie Herbert [who] managed Journey and Santana back in the day. Atlantic Records didn’t feel ‘To Be With You’; they thought, ‘Nah, it’s not going to work with this band.’ Herbie begged them to put out ‘To Be With You.’ They were going to dump us.

“He gathered the tribes of all the radio station people he knew, programmers and marketing people, and said, ‘We need to come up with some sort of concept to break this song for this band.’

“I remember the format was ‘smash or trash.’ It was like, you played the record at some random time at night and if you liked this record, you called it a ‘smash,’ if you didn’t, ‘trash,’ and [they’d] never play it again. Lucky for us, it spread like wildfire, and it was a smash.”

“There were two different things going on. It was a friend of mine named Patricia Reynolds, and I also [originally] played it live in my front yard to my sister’s friends.

“[Patricia’s now] married to a famous Scottish musician, and I think I ran into her a couple of times, and she was like, ‘I had no idea you loved me!’ She was just a really, really great friend. Read poetry to me, helped me write songs, and she got a lot of attention—a lot of guys liked her and broke her heart. I was her shoulder to cry on. But I misconstrued that for love.” 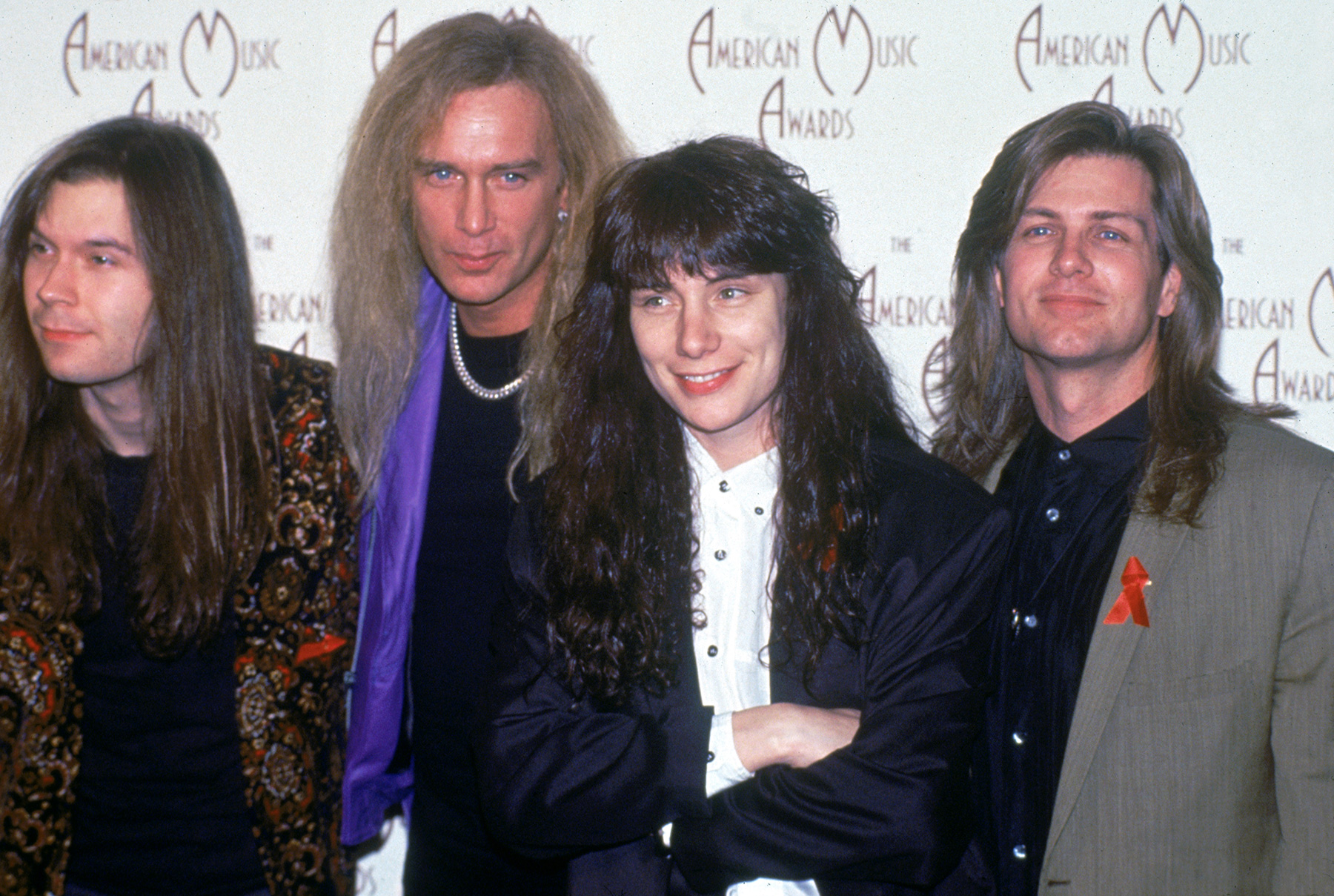 Mr. Big at the American Music Awards, 1993. Martin tells RCL that it was there that they realized grunge had taken over; Pearl Jam beat them out in the Favorite Heavy Metal/Hard Rock New Artist category. (left to right): Paul Gilbert, Billy Sheehan, Eric Martin, and Pat Torpey. (Miranda Shen/Fotos International/Getty Images)

“It’s a two-parter. Patricia was really a super pretty girl—she was so smart and poetic and Zen-y. But there were some days that I just couldn’t get a chance to talk to her, and I had to wait in line to talk to her. There would be so many boys in front of me. So that’s ‘waiting on a line.’

“And ‘greens and blues’: She gave me a mood ring, and greens were happy and blues were sad. ‘Waiting on a line of greens and blues’ … it wasn’t just about me, it was about her. Because she’d have all this attention and everybody loved her, but then she’d fall in love and they’d break her heart.”

Finding Out the Song Was No. 1

“I was in Daytona Beach, Florida, at a club called Finky’s, and it was one of those bars right by the ocean where people could come to the bar with their bathing suits on. We got there early in the morning, the bus pulled up, [and] there’s nobody [there]. The monitor guy looks hungover, the sound guy’s dialing up everything, and there’s all this gear in the middle of the stage.

“We weren’t reading Billboard magazine; maybe somebody mentioned that it was No. 118 or whatever. Our crew and us, we’re tearing stuff off the stage, and I go over to this area where it has a bunch of pinball games. And I start playing pinball. It’s like 9 o’clock in the morning, and they had MTV on and this guy goes, ‘Here’s our No. 1 video, and this is the No. 1 song in the country.’ And it was ‘To Be With You.’ I ran out and told everybody, and I go, ‘This is amazing!’

“We were all freaked out. We were just so excited. That night, it was lines around the block, and there were girls coming to the show! I remember that we were so happy—you know, we were a band, we were constantly together, and we loved what we did, but I remember just how huge [the] Cheshire-cat grins on our faces [were], and drinking some wine and toasting some champagne.