Inside Kevin Costner and Woody Harrelson’s Bromance in “The Highwaymen”

Tracking the enduring appeal of men bonding over blacktop and bullets. 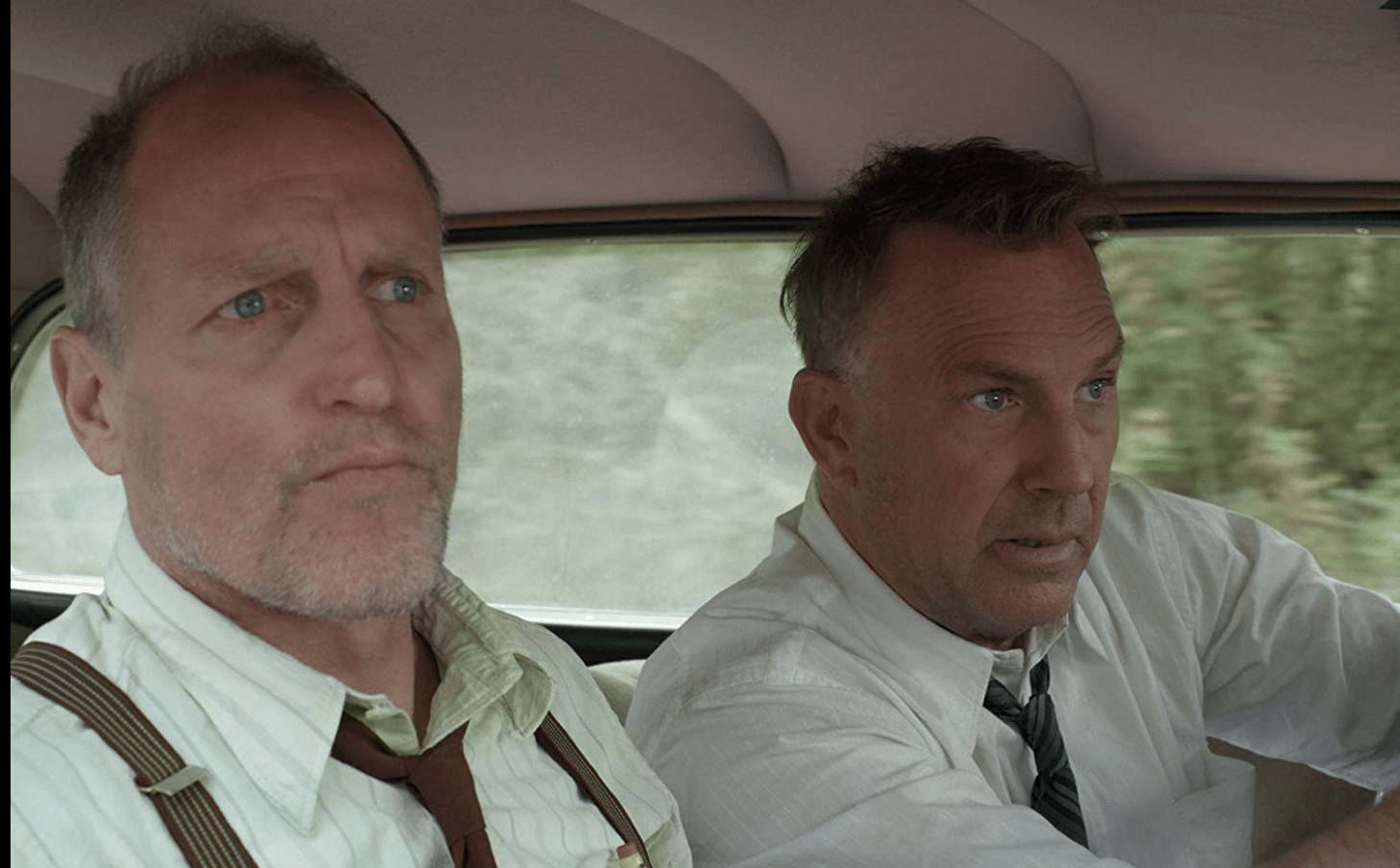 I never envisioned Kevin Costner and Woody Harrelson as the stuff of bromance, two great tastes that go great together like chocolate and peanut butter or rum and coke. But, in Netflix’s new movie The Highwaymen that premiered at SXSW over the weekend, and will begin to stream on March 29th, the manly movie stars get bromantic as retired Texas Rangers Frank Hamer and Maney Gault who tick off the miles together in a cherry vintage sedan in pursuit of lover law-breakers Bonnie and Clyde.

The Highwaymen rides in on a well-worn track – as the miles increase on the odometer, the friendship takes shape and the men sitting side-by-side discover through a mutual goal that they have more in common than they might have believed during the opening credits. The road bromance has long been a Hollywood staple – and it appears ageless. (And is good for maturing talent: Costner is 64; Harrelson is 57).

The genre doubles the star power of a movie to give it a four-fisted box office boost, or expand the audience reach like a marketing Venn diagram. One recent example is Green Book, which took a critical beating on its way to its crowd-pleasing Best Picture Oscar by serving up Viggo Mortensen and Mahershala Ali packed together in a 1962 Cadillac deVille driving through the hostile South.

Among my favorite vintage road-mances are Bob Hope and Bing Crosby in Road to Morocco and many other roads traveled, Robert Redford and Paul Newman relying on literal horsepower in Butch Cassidy and the Sundance Kid, and the pairing of grumpy bounty hunter Robert DeNiro and prissy mob accountant Charles Grodin putting each other through hilarious hell on a transcontinental train ride in Midnight Run.

Or take Dean Martin and Jerry Lewis, who famously despised each other off-screen, making sweet movie music together in Hollywood or Bust – a movie where Federico Fellini’s sex goddess Anita Ekberg was only a blip between the two male leads.

Great on-screen chemistry between two men is the same genie in a bottle that characterizes a romantic spark. The arc is often one of mutual estrangement if not outright dislike or distrust, followed by a series of trials that test and ultimately strengthen the pair’s bond, and then an acknowledgement that there’s mutual dependence if not outright affection.

Unlike romance, this connection is rarely sealed by a kiss but by a grudging gesture, as it is on the side of that dusty long Texas road at the end of The Highwaymen (no need for spoilers here). Mush is for chick flicks.

And, in the case of The Highwayman, so is direct eye contact. Keep your eyes on the road, dude.

The chemistry works for Costner and Harrelson because in many ways they are actors of contrasting talents.

Still square-jawed handsome if a little stockier, Costner has built a career largely, though not entirely, on leading men parts like Hamer – personified as G-man Eliot Ness in The Untouchables on the hunt for Al Capone, or as the loyal defender at Whitney Houston’s side in The Bodyguard.

Costner is the epitome of the stoic American leading man in the Gary Cooper/Gregory Peck vein, born to play the pack’s strong-but-silent alpha dog. And age has not dimmed this, even if the opportunities are fewer and far between. (Maybe Netflix will fix that).

On the other hand, Harrelson is the more volatile and unpredictable – a character actor who also plays lead. He has a penchant for drunks and thieves in movies like The Glass Castle and Natural Born Killers. But in his moving role as the embattled and terminally ill sheriff in Three Billboards Outside Ebbing, Missouri he displays his talent as a powerful ensemble player capable of flying his most intimate feelings in front of the camera.

Because, in this crime drama, they both play older-and-wiser-and-slower characters, there’s an appealing mellowness to their interactions. Harrelson’s Gault is not the full-on crazy of the actor’s earlier career. And yet he’s still the gunpowder to Costner’s flint, the less stable element. His character’s volatility and emotional accessibility ultimately humanizes the stick-up-his-ass aspect to Costner’s Hamer.

That imbalance, that interaction, enables the bromantic chemistry. One doesn’t require music welling up, or a swooping crane shot, to see that these men connect, really connect. And, because they’re manly men with pistols on their hips, love means never having to explain yourself.

One element that separates bromance from romance: the protagonists need never ask that dreaded questions: How do you really feel? In this case, they just nod, spit and drive off in the same direction.