“Hillbilly Elegy” and the Rise of the Award-Season Thirst Trap

Why did Amy Adams and Glenn Close choose to do such a bad movie? For the Oscar.

As mere mortals, it’s not our place to speculate about what goes on in the interior lives of Amy Adams and Glenn Close. Whether it’s as existential as why they get out of bed in the morning or as banal as what they then have for breakfast, nobody really knows bupkus. And yet it has been decided by large swaths of the moviegoing public that these two women crave nothing in life quite as desperately as an Academy Award.

It’s a tongue-in-cheek refrain previously appended to Leonardo DiCaprio by social media and the online commentariat, a reduction of the artistic process to craven gold-mining, and these two actresses are the latest targets of the narrative. Anyone nominated enough times without bringing home a statuette must necessarily be motivated by the promise of new hardware for the mantelpiece in their soul-stretching, intimately personal rendering of someone else’s lived experience.

This absurd line of thinking is of a piece with the problematic and dismissive notion of Oscar bait, already sufficiently picked apart by writers more studious than myself. But something about Hillbilly Elegy, Netflix’s new Appalachian melodrama and the latest submission-reel fodder for Adams and Close, reeks with the stench of award season thirstiness. Vanity Fair’s review went right for the jugular and dubbed Ron Howard’s adaptation of J.D. Vance’s memoir “Shameless Oscar Bait,” and Vulture has already run an article explaining why Adams shouldn’t make it to the podium on Hollywood’s biggest night. This naturally poses the question of what made us think she might. While critics have near-unanimously agreed that Hillbilly Elegy is awful, that’s never stopped an Oscar victory before, and certain qualities consistent between the film’s two biggest performances have put them on that well-trod path. The extraordinary, uncharacteristic badness of the film’s A-list stars clarifies a lot — if not about Oscar bait, then about your given actor’s frequently confused notion of what constitutes a juicy role.

Though a young J.D. Vance (played by a mumbling Gabriel Basso as if through a mouthful of gravy) qualifies as the main character of his own life story, he takes second billing to his more colorful relatives in its promotional materials. The film’s producers know that the real draw will be the bad behavior and leathery love of his mother and grandmother, posited by the text as the formative influences that got him to Yale Law in the toniest halls of New England. Back home in the holler of rural Ohio, J.D.’s mom Beverly (Adams) numbers among the many low-income whites finding solace in opioid abuse, an addiction that drives her to endanger and abuse her son. (And that’s all before the scene in which he must keep her from fishing a heroin needle out of a toilet.) He was then remanded to the custody of his scowl-faced Mamaw (Close), who doles out country wisdom about the moral alignment of various Terminator models between cursing, chain-smoking cigarettes, and being generally uncouth for the norms of her age and gender.

Coverage has emphasized the transformative element that left two of America’s bigger movie stars nearly unrecognizable. The first still image tellingly depicted the two generations of Vance women, resplendent in poverty-drag getups, instead of J.D. himself. In it, Adams tucks her thumbs into her denim shorteralls, de-glamorized for verisimilitude by a slight weight gain and and a wig with Tonya Harding bangs. (“I always name my wigs, and that wig was ‘Beaverly’ because it was so hot it was like wearing a beaver hat on my head,” Adams recently told Entertainment Weekly.) Close goes even wilder, disappearing into a hairpiece of greyed curls, prosthetic facial makeup, a rotation of oversized Salvation Army T-shirts pitched at maximum tackiness, and the stolid expression of a New Bedford whaler. She looks like a lot of things, many of them suggested by my peers in printed disses over the past week; for my money, she bears the strongest resemblance to SpongeBob when he gets dehydrated.

Both Beverly and Mamaw fit into a long and storied tradition of acting that is effortful without being great. We have the likes of Dustin Hoffman and Robert De Niro to thank for the thespian’s veneration of physical challenge, a perception of excellence informed by the latter’s bulking-up and winnowing-down for Martin Scorsese, and the former’s immersion in the autistic psychology and bodily tics of Rain Man. But many talents have put the horse before the cart about that much, presuming that materially becoming a character will unlock emotional profundity instead of the other way around, with a strong foundation validating and legitimizing the visual dress-up. Oscar hounds save special contempt for someone like Jared Leto, all surface and no substance as the trans woman Rayon in Dallas Buyers Club, the makeup and skeletal physique a distraction from the complete lack of authenticity in his actions.

In this type of role, a morph of the face or voice is usually of a piece with a larger, pervasive showiness betraying the belief that more is more. Both Beverly and Mamaw get at least one of the lugubrious monologues so easily clipped out for repetition around the awards circuit, and an overreaching showcase for some high-decibel yelling. Neither Adams nor Close had been a model of understatement prior to this film, both actresses excelling as distinctive personalities informed by big creative choices, but those instincts moulder into caricature here. In Fatal Attraction, Close exercised a tight control over the upticks in her character’s mania, an attention to detail lost in the broad, rejected-SNL-sketch energy of Mamaw.

Hobbled by exquisitely awful dialogue, the cast leans all the way into the surface-level understanding of how people work exemplified by a film that paints J.D. himself as a bumpkin baffled by city-folk and their forks. Adams in particular really Goes For It, her big moment coming when she bursts barefoot onto the street outside her home in a narcotized freakout of raving hysteria. A scene that requires sensitivity and delicacy instead comes across like an excuse to take leave of restraint and discipline, in our faces even when photographed in a wide shot. The old “work smarter, not harder” office-space axiom applies to acting just as aptly.

Even so, this is a specialized sort of failure, beyond garden-variety incompetence. Rather than simple bad acting, it strikes a tuned-in viewer more like a misapplication of the mechanics that more often result in good acting. It’s easy to see the wheels turning in the actresses’ heads, each move announced so clearly that we can see all the work that a superior performance would hide. This sort of work has the flavor of expertise, without the execution — all things said, a pretty good operating definition of “Oscar bait.”

The tricky thing is that some of these ploys pay dividends for actors come Oscar night where some fall through, and it can be difficult to separate “awful” from “just awful enough to work.” Who lands in contention with a nomination and who makes it to the podium are mostly functions of obscure inside-baseball industry doings, as studios mount costly and palm-greasy campaigns for Academy voting blocs. In the case of Hillbilly Elegy in specific, I’m dubious about its potential. While Netflix may affect the appearance of being richer than god, they have a finite amount of money to spend on the Oscar race, and Best Actress resources may be more wisely dedicated to Viola Davis (Ma Rainey’s Black Bottom), Sophia Loren (The Life Ahead) or Vanessa Kirby (Pieces of a Woman) than Adams. The process of elimination, or lack thereof, puts Close’s chances in better stead, though she may still be put to the side in favor of Mank’s Amanda Seyfried.

Reviews and audience reception, while far from determining factors, have at least something to do with all this. There’s a chicken-egg element to the generation of buzz, as studios and word-of-mouth both seem to simultaneously dictate the other. This is to say that the real America seems to dislike Hillbilly Elegy’s perspectives on “real America” enough that it may fall outside of the awards conversation entirely, remanding the film to a different filing cabinet of memory. Without the context of an Oscar, we can see Adams and Close’s performances in a clearer light as strained grasping, not exactly for Academy approval but for a blinkered notion of genius that institution has in part dictated. Adams and Close know what good acting looks like, they’ve done enough of it, but it’s not enough to merely affect that appearance. Without a deeper humanity, it’s all just making noise and doing faces. Whether it’s for plaudits or actorly indulgence, doesn’t matter at what — they’re just trying too hard. 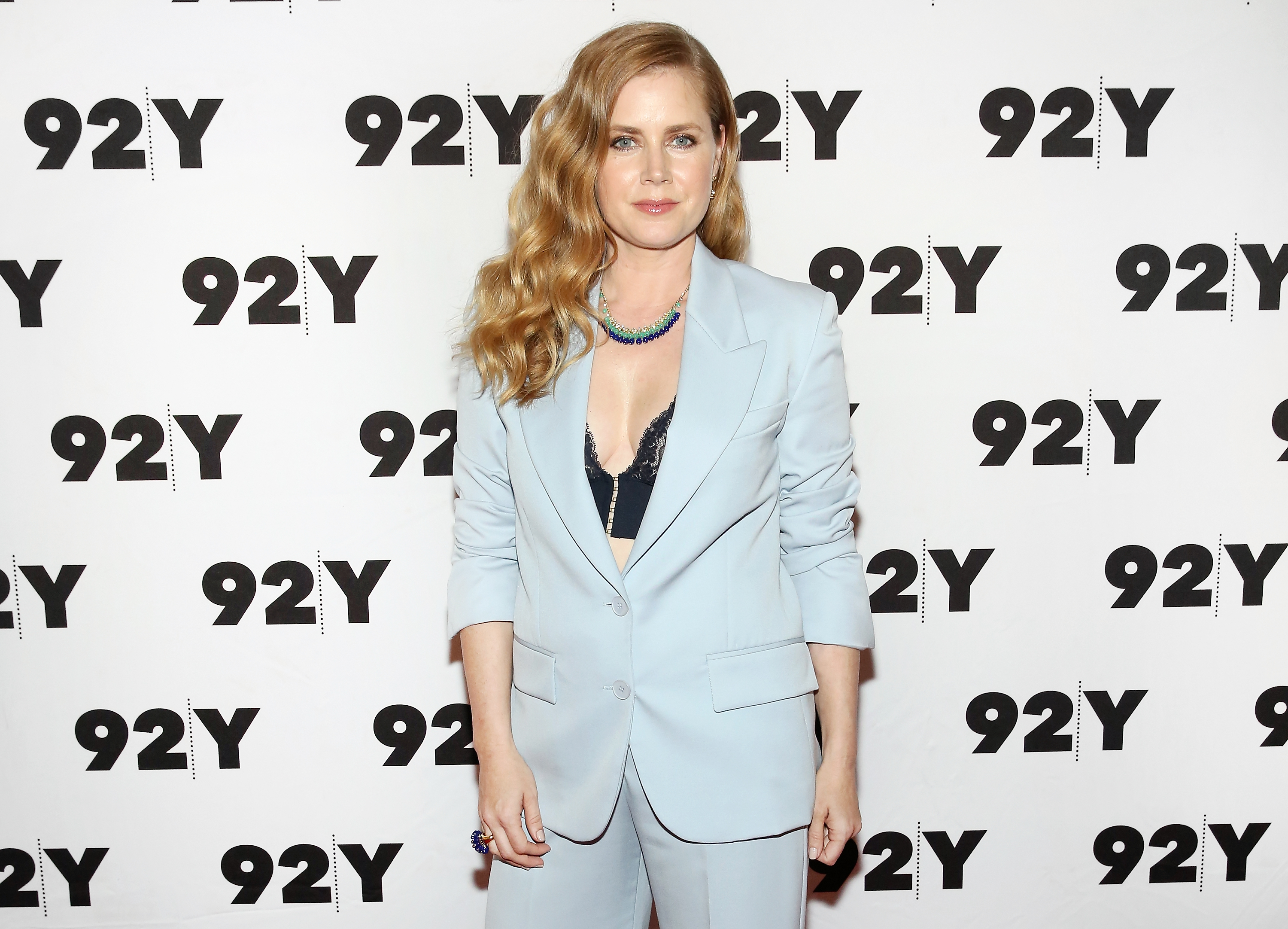 Amy Adams Gets a Grip on HBO’s “Sharp Objects”

Oscars Needs a Rewrite: For all the Changes, “Green Book” Win Shows Academy Still Stuck in Past