Forget Halloween and Christmas: Thanksgiving Is the King of Holiday Movie Season

Darkness, redemption and pumpkin pie: what more could you want? 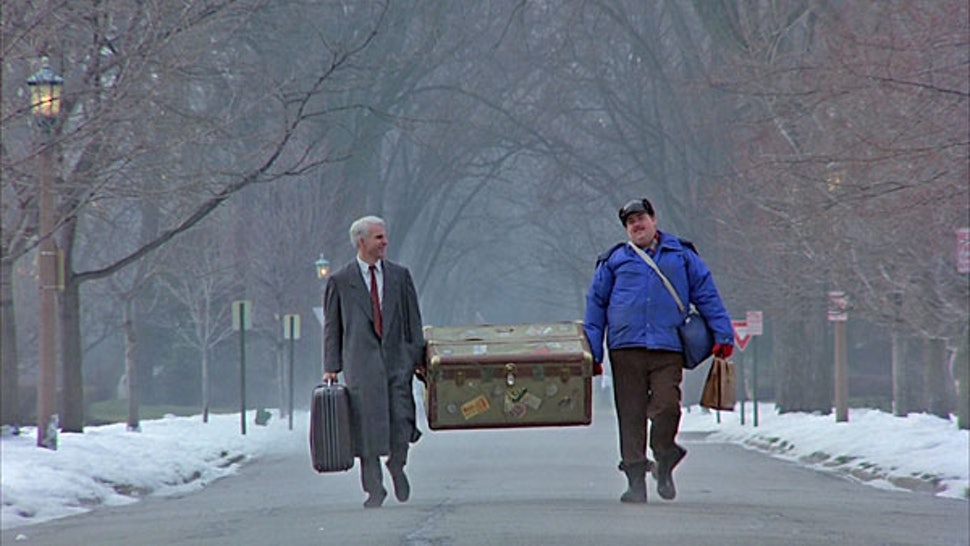 Steve Martin and John Candy are as Thanksgiving as fighting with your family.
By Jason Diamond / November 28, 2019 8:30 am

No holiday speaks to our dueling American psyche quite like Thanksgiving.

It’s a holiday to give thanks, but it’s also a holiday rooted in tragedy and genocide, as your little brother who just started his first year at a liberal arts college will no doubt remind you. It’s a time to be with family and loved ones, but also a time that will inevitably descend into tense debates about politics, life choices and assorted other skeletons-in-the-closet, leaving behind a mess that lingers like a cranberry-sauce stain on the linens. And then, when it’s all said and done, you’ll say your goodbyes and think, “Thanksgiving is such a wonderful holiday. I can’t wait to do it again next year.”

That would explain why the small canon of films based around the third Thursday of November has quietly turned it into the best holiday for films over the last 40 years. There will always be a slate of new scary movies to watch on Halloween, but as a rule, the genre tends toward the derivative and predictable. Warm-and-fuzzy Christmas movies can be good, but the modern classics are few and far between. Thanksgiving — with all of its possible pitfalls, warm moments and drunk uncles — leaves so much more room for a director’s interpretation.

The closest thing we have to a Thanksgiving film master is John Hughes. His 1987 film Planes, Trains and Automobiles — starring John Candy and Steve Martin in one of the greatest buddy comedy pairings one could ask for — is really the gold standard. It has everything you could ask for: the stress of holiday travel turned into something hilarious, Martin saying the F-word a bunch, and redemption. And when Martin’s Neal and Candy’s Del finally make it back to Chicagoland for the holiday (I won’t spoil the big reveal in case you haven’t seen it), we get one of the saddest, sweetest, most tender endings in movie history. It’s the Thanksgiving equivalent of George Bailey running through the streets of Bedford Falls at the end of It’s a Wonderful Life: a reaffirmation that we can all be better, but that we’re so lucky to have anything at all.

Hughes really gets the Thanksgiving film crown on a technicality. His 1991 film Dutch also centers around the holiday, and isn’t that far removed from the premise of Planes, Trains and Automobiles: working-class Ed O’Neill is tasked with driving home his girlfriend’s bratty son (Ethan Embry) from prep school for the holiday; hijinks and reluctant bonding ensue. Hughes only wrote Dutch, and the film was considered a bomb when it came out, but despite its poor reviews, I’ve always liked the movie and think it might deserve a second look. O’Neill takes his iconic Al Bundy character and spruces him up a little for the film to make the likable Dutch Dooley, while Embry plays the spoiled little prick to perfection. His growth leading up to turkey dinner is great to watch in that saccharine-but-endearing way that ’80s movies — and especially Hughes movies — seem to have perfected.

A big reason why Thanksgiving movies have worked more often than not is simply a matter of volume: the genre as a whole is a fairly recent development, and there haven’t been any notable stinkers to remember. The ‘60s had Arlo Guthrie in Alice’s Restaurant (which a number of readers wrote in to remind me I didn’t mention in connection with Thanksgiving Town, USA — aka Stockbridge, MA), while the following decade doesn’t really add much to the canon besides A Charlie Brown Thanksgiving. It really wasn’t until the mid-’80s that moviemakers started coming around to everything the holiday has to offer, starting with Woody Allen’s 1986 film Hannah and Her Sisters.

I know, I know: Woody Allen. Ten years ago people routinely talked about his films as the classics that they are, but lately it’s felt like in order to talk about appreciating his movies you first need to mutter the password “Isaac Davis” to get granted into some underground club. So saying something like Hannah and Her Sisters is an incredible movie and the epitome of the Thanksgiving classic is possibly considered risqué, I realize. But I really don’t want to get into a discussion about separating the artists from the art; all I’ll say is that the part where Sam Waterston takes Dianne Wiest and Carrie Fisher on an architectural tour of New York City is perfection.

The ‘90s yielded a few classics: 1995’s Home for the Holidays, and then cult favorite The House of Yes (1997), which is really unlike any other movie I can think of. It’s one of those movies that’s only going to grow in stature, Especially because it can credibly be looked at as the film that kicked off Parker Posey’s run of great roles in Christopher Guest’s mockumentaries.

But the one film that sticks out in my mind as the decade’s best, and what I consider the height of Thanksgiving cinema, is Ang Lee’s 1997 adaptation of Rick Moody’s novel The Ice Storm. Starring Kevin Kline, Sigourney Weaver, Joan Allen, Tobey Maguire, Christina Ricci and a cast decked out in early-’70s attire, Lee takes everything that is awkward about the holiday and brings it to the surface. All the family secrets come out and, unlike so many movies set around the same time of year, there isn’t any redemption. It’s dark and moody and you equally dread and love every second of it — just like Thanksgiving.

The Thanksgiving movie equally suffers and excels because it falls smack between the two most cinema-friendly holidays. Any scary movie can fit into your Halloween viewing, and Christmas movies don’t really ask for much but a festive backdrop and a happy ending. Thanksgiving films, on the other hand, are relatively free from stereotypes and expectations. They aren’t necessarily happy films; no great Thanksgiving film touts the “magic” of the holiday like a movie set around Christmas might.

What makes the Thanksgiving movie work, ultimately, is that it doesn’t want to sell you anything. Rather, it sets out to portray a strange, complicated day that’s built on the promise of something that seems almost foreign and terrifying these days: bringing us all together.