“Babylon” Is a Massive, Ambitious Spectacle

Along with water and kids, conventional Tinseltown wisdom warns directors against working with animals, but Damien Chazelle’s Golden Age period piece Babylon is nonetheless a real zoo. Rats are bitten in two for the amusement of depraved onlookers, while a chained-up attack gator lies in wait nearby. A little lizard watches one man’s dark night of the soul in silent, inscrutable judgement. In keeping with the sickened extravagance redolent of Fellini, some critters become symbols as ripe as the sea creature mouldering on the beach at the end of La Dolce Vita, a stuffed rabbit made an emblem of grotesque wealth and a rattlesnake into an embodiment of fear. The big one is a literal elephant in the room during a studio boss’ bacchanalian blowout, hauled up a hill through backbreaking physical exertion and then used to distract partygoers while a chorus girl’s foamy-mouthed corpse is snuck out the back door.

Shown blanketing one of his handlers in explosive shart that also coats the camera’s lens, the CGI pachyderm unsubtly stands in for the entertainment industry’s own rejection of subtlety. Heralding the three coming hours jam-packed with the agonies and ecstasies of showbiz, this great beast is the spectacle machine incarnate: made possible through the labors of an unsung crew, liable to mangle the odd leg with its thunderous stamping, and capable of attracting enough attention to cover for its owners’ id-driven bad behavior. The presence of an elephant also hints at a workable critical approach for digesting this hefty, contradictory slab of movie, calling to mind the Indian parable of the blind men. Grab onto Babylon’s trunk, and it feels like an indictment of a ruthless system that grinds artists and technicians into glue. Holding the tail, it seems to be a starry-eyed paean to the dreamers that make Hollywood go and the rapture their work inspires. To match Earth’s largest land animal, it’s as if Chazelle has set out to make Earth’s largest film, its unwieldy dazzle so towering that it can contain any dissonance — between cinema’s terrible tolls and transcendent rewards, the arrogance and insecurities of fragile actors, the order within a shooting day’s utter chaos. In a ravenous, cocaine-fueled mania, it attempts to do everything at the same time, and astonishes by managing most of it.

The delirious cross-cutting of Paul Thomas Anderson’s multipartite Magnolia has provided an evident blueprint for Chazelle’s frantic ensemble piece, though the digressions in his diagnoses of epochal changeover for the medium more closely recall Boogie Nights. In either case, this wanton money-to-burn mode of studio-level auteurism plays differently coming from an overachieving East Coast Ivy Leaguer as opposed to a Californian dropout. If PTA’s erratic rhythms and red-eyed intensity came from indie rock, Chazelle’s following the brisk, crisp tempo of hot jazz, obsessed as he is with the precise interlocking of visual counterpoints. From the elephant-besieged rager through the hectic schedule of production starting the next morning, we flit between three people whose fates will rise and fall along with an early-LA culture in violent flux.

Brad Pitt plays silent screen idol Jack Conrad like a greatest hits collection of his own performances, introduced babbling in Italian à la Inglourious Basterds, and cruising through the rest of his fabulous life with the fading cool of Once Upon a Time in Hollywood. Even more directly evoking Quentin Tarantino’s human-scaled epic about people on the way up and on the way out, one scene sees Margot Robbie’s whirling-hurricane ingenue Nellie LaRoy (she added the “La”) talk her way into a showing of a movie she’s in and emerge transformed by the audience’s roaring approval. Scuttling around them both is Diego Calva as Manuel “Manny” Torres, a Mexican gofer climbing through the ranks to a plum executive gig, infatuated with Nellie at first sight — she careens into the movie behind the wheel of a car she promptly crashes — on the night he initially stumbles into a gig as Jack’s right-hand guy. Though informed by the outlines of real-life figures like Valentino rival John Gilbert or original sex bomb Clara Bow, these titans are brought nearer to Earth so that we might reach an access point for their emotional interiority, not for the sake of bolstering hard accuracy about anything; history buffs will doubtless find superficial nits to pick while everyone’s busy having a good time.

For all the hubris of Chazelle’s colossal vision, he’s humbled by the small miracle that takes place every time professionals do their jobs in tandem. With a pair of shoots, one a star-making dream and one a stop-and-repeat nightmare, Robbie in particular posits acting as the task of remembering one thousand things without thinking about any of them. In her breakout role as “The Wild Child,” the camera loves her and she loves it right back, summoning a single tear at the height of her power while on a roll within the rhythms of silent takes. Once sound comes to town, she’s undone by her Lafayette twang, shifting social mores in America forcing the country’s indulgent side underground, and the daunting requirements of the new methods. If the slightest thing is amiss, such as surgical pins squeaking at a decibel level inaudible to all but the harried audio engineer, they must reset and go again in punishing heat against a ticking clock. In Manny’s early days on the outdoor lot of Kinoscope Pictures, everything going wrong is what makes this fun; there’s no thrill like the mad dash to solve problems on the fly, havoc every which way somehow coalescing into that elusive moment where you get the shot.

Chazelle’s acid valentine stands out from the sentimental pack not just for its emphasis on the nitty-gritty of process along with its ravishing outcomes, but for its deep cynicism toward all that’s lost along the way to eternal glory on celluloid. In one standout monologue, a Hedda Hopper-ish gossipmonger portrayed by Jean Smart (“You know, I knew Proust,” she says, credibly) explains to Jack that the motion picture enables dead people to live forever, a nutshell version of Laura Mulvey’s mind-opening theoretical text Death 24x a Second: Stillness and the Moving Image. But this legacy will not be afforded to the extra accidentally impaled by a pike, the recordist succumbing to heat stroke in a booth hotter than a torture chamber, or the overdosed bit players. The breakneck editing skates right by these unfortunate demises with deliberate flippancy, mirroring the disinterested hustling-along of both the people with a day’s shot list to get in the can, and posterity itself. 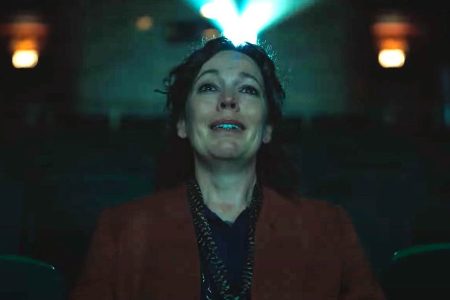 "Empire of Light" is the latest in a slew of movies about the power of film. But do we really need the reminder?

In cataloguing all that Hollywood leaves crushed underfoot, Chazelle gives short shrift to some of the casualties not passed in a blink, the most glaring instance of his audacious ambition’s grasp exceeding his reach. Because he can’t resist jazz musicians or poking the bear of racial politics, we scantly check in with trumpeter Sidney, played with a stiff upper lip by Jovan Adepo even when he’s not forming an embouchure. Aside from soundtracking the soirees as a mouthpiece for Justin Hurwitz’s orgiastic score, he doesn’t get much to do aside from saying the N-word, getting patronized by rich white people, donning blackface as a humiliating on-the-fly technical fix and excusing himself from the plot. Same goes for Li Jun Li’s dialogue card designer extraordinaire and sapphic cabaret dynamo Lady Fay Zhu, who’s allotted a couple indelible musical numbers before the advent of the talkies renders her obsolete. Manny travels a sounder arc as he incrementally assimilates himself into a cloistered power structure, his dark hair and olive complexion allowing him to pass as a Spaniard and implicitly suggest that not all inequality is created equal.

This short-sightedness about race, the occasional lag in the late second act and whichever other flaws may very well be wedged in this sprawling run time all gel with a melancholic embrace of imperfection. Being the evil twin that La La Land keeps locked in the basement, the parting minutes of Babylon employ similar techniques to arrive at a similarly ambivalent position of acceptance. The romance between Ryan Gosling and Emma Stone is reiterated as Manny’s amour fou for The Movies, likewise imagining the impossible happy ending to a promising coupling that couldn’t last. And instead of racing back through a courtship in its idealized soundstage form, this grand finale condenses a hundred-plus years of cinematic evolution into a kaleidoscopic montage that climaxes with a total formal obliteration into the red, blue and green component parts of the projected image.

Aside from the sheer pleasure of seeing nearly $80 million of Paramount’s money spent smuggling abstraction into the multiplex, it’s overwhelming to behold the full scope of an art form’s tragedy and triumph at hyperspeed. This thing of ours, it’s Godard and Avatar; it’s Walt Disney and Leni Riefenstahl and Roman Polanski; it’s watching The Wizard of Oz and learning what happened to Judy Garland and watching The Wizard of Oz again. Under Chazelle’s bruised showman sensibility, to love something means honestly seeing all the ways in which it is broken and still hearing violins when you look at it anyway. Film can be a capricious ingrate, a bully, an oppressor, a killer. Even so, we’ll always have “We’ll always have Paris.” 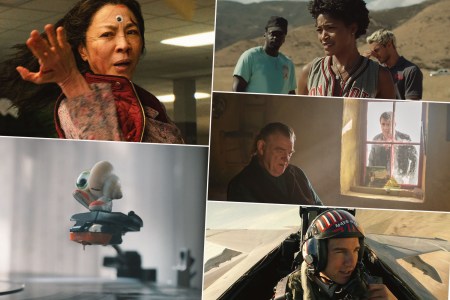 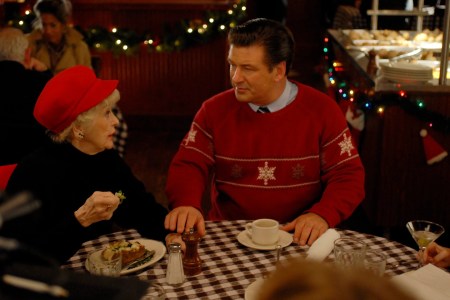 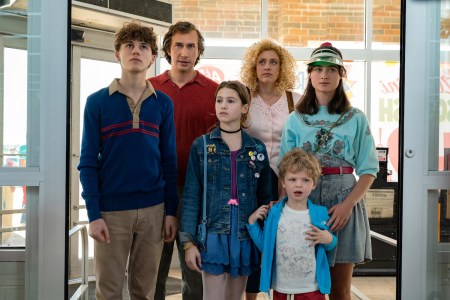 Though More Oddity Than Masterpiece, Noah Baumbach’s “White Noise” Is Still Worth Your Time