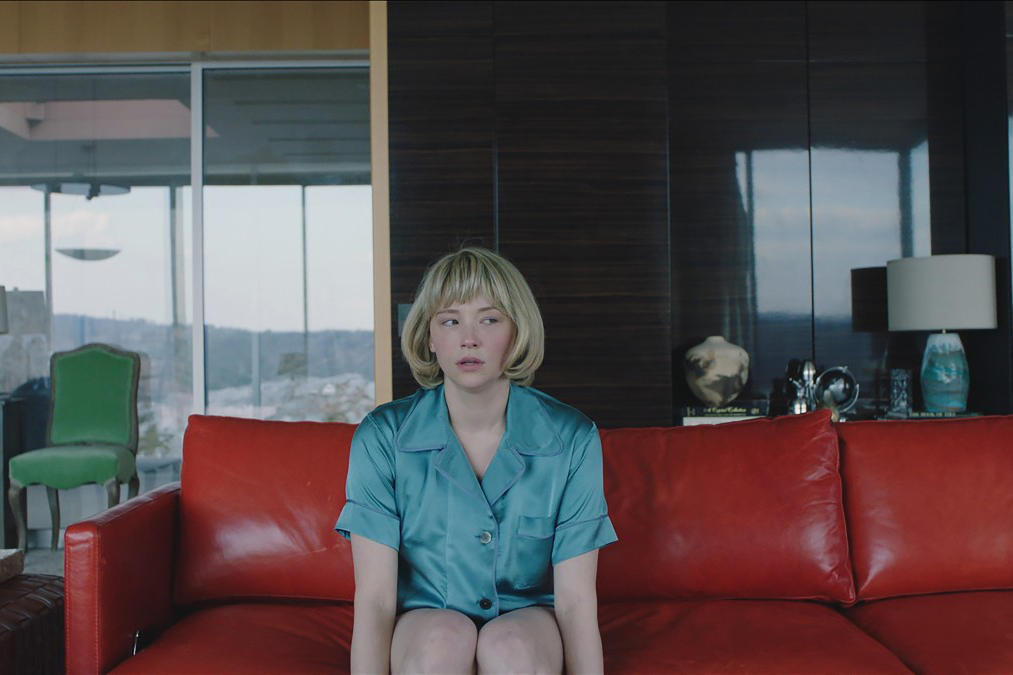 Haley Bennett her most varied and demanding role yet in "Swallow"
IFC Films
By Charles Bramesco / March 16, 2020 8:27 am

The most morbid chapter from Carlo Mirabella-Davis’s family history concerns his grandmother, who he recalls as being in an unhappy marriage. An overall sense of unease in her own life led the woman to develop what her grandson now describes as “various rituals of control,” including obsessive hand-washing that would burn through four cakes of soap per day and 12 bottles of rubbing alcohol each week. From there, the story follows a track horrifyingly common to the midcentury era: her husband had her committed to a mental institution, where she was given a lobotomy. She was never the same.

“She was looking for order in a life that made her feel powerless,” Mirabella-Davis tells InsideHook. “It’s a tragic event in our family that I always felt would have to factor into my films in some way.”

That’s a grabby, soundbite-friendly point of entry for his new film Swallow, but he’s not using another person’s pain as a hook to sell his own product — he’s too compassionate for that. His first feature is a work of tremendous empathy that does right by its inspiration by opening a window into one woman’s household suffering. The film gave star and executive producer Haley Bennett her most varied and demanding role yet as Hunter, whose mental state deteriorates before our very eyes as the film unspools. Though she may outwardly appear to have it all — a dashing new husband, fabulously wealthy in-laws offering her entry to their rarefied lifestyle — her perfect home quickly transforms into a well-appointed prison. It is around this time that she begins eating objects that are not food.

The DSM-5 identifies this disorder as pica, a longtime province of My Strange Addiction treated here with newfound sensitivity and attention to detail. “The commonality among pica, eating disorders, self-mutilation, is the search for self-control,” Mirabella-Davis explains.“We reached out to the world’s foremost expert on pica, Rachel Bryant-Waugh, who read the script and wrote up a real, legitimate case study of Hunter as if she was any other patient. This proved hugely important to us. We realized that the compulsion is dangerous, but also that it can be a catalyst to get in touch with her deeper self and reject this environment.”

Reject it she must. Production designer Erin Magill turned newlyweds Richie (Austin Stowell) and Hunter’s sleek, chic love nest into a space of ambient, low-burn anxiety. All the furniture is so perfectly geometric as to look uncomfortable, as if relaxing would be impossible. The color palette blends muted greys and off-whites like the first half of a commercial for depression medication. She must keep it spotless to be the good wife she feels she should, yet for all the sterility of its look, this proves a toxic atmosphere for Hunter.

“There are so many fascinating ways in which Hunter’s psychological journey gets externalized through production design and camerawork,” Mirabella-Davis says. “Our cinematographer Kate Arizmendi was very strict about having a set of rules to dictate camera direction. In the beginning, Hunter is dominated by the frame, and then Kate breaks those rules to create really startling moments. Dropping in a little handheld counts for a lot when you’re shooting almost entirely on stationary setups.”

“We had very few dolly shots,” Bennett adds. “No more than a couple.”

Hunter must do something to alleviate the crushing weight of her own day-to-day routine, and so one afternoon, she swallows a marble. Later, she passes it, cleans it and keeps it like a little trophy of what she’s accomplished. Patiently discerning why she does so constitutes the deeper raison d’etre of a film with surface ambitions in the body horror and psychothriller genres. (The film racked up three awards at this past fall’s Brooklyn Horror Film Festival, including the Best Actress honors for Bennett. Full disclosure, I was on the jury that bestowed them on her.)

“This shakes her out of her apathy,” Bennett offers, her analysis being pathology-as-survival-strategy. The film assumes a more multivalent stance, reflected in Mirabella-Davis’s more holistic approach to armchair therapy. “I’m a big believer in the concept that, with these kinds of compulsions, there are usually many reasons why they happen,” he says. “Unresolved trauma, the constraining patriarchal structure that Hunter finds herself trapped in. The powers that be are determined to contain her.”

The powers that be get two ghastly representatives in Richie’s parents, played by character actors par excellence Elizabeth Marvel and David Rasche as impeccably mannered ghouls. They speak to Hunter with the same tone of professional concern one might reserve for a well-bred racehorse, laying bare their mandate that she provide a sanitary and healthy womb for their grandchild. They’re fine additions to the horror genre’s rogues gallery of evil WASPs, joining the Get Out family and the murderous one-percenters of Ready Or Not in a recent boom. “Hunter comes from a lower-middle-class background and gets thoroughly absorbed into this setting of wealth,” Mirabella-Davis says. “She becomes a commodity, as much of an object as anything she consumes around the house. They see her as a vessel for her legacy, and every aspect of her life gets readjusted for that purpose.”

“It kind of reminds me of Meghan Markle,” Bennett muses, with a grim chuckle that suggests she’s only half-joking.

Mirabella-Davis returns her laugh. “I wonder if we can get her to see this movie.”

Losing that sense of agency drives Hunter to greater extremes in her pica, hitting an early peak during an exquisitely excruciating sequence in which she ingests a pushpin. Bennett feasts on this moment, forging first through trepidation, then anguish, then determination, then one last jag of stabbing agony before assuming a warmed contentment. It’s a dizzyingly intense scene on two fronts, both in the vicarious intestinal twinge a person feels watching her send a steel spike down her esophagus, as well as the massive figurative wound she’s opening up so that it might heal. The cinematography of this scene relies on implication and intimation, paying Hunter and her private process a due respect that doesn’t diminish the terror it inspires. Like 2018’s superlative camgirl thriller Cam, also shot by Arizmendi, the camera places the audience inside its subject’s headspace instead of allowing us to gawk from the outside. We feel the knots in her stomach.

They shot the film in sequence, which meant that the time to film the raw, intimate climax — the nature of which I’ll leave unspecified here — came after Bennett had already put herself through most of the emotional gauntlet. She came to this day of production, in which Hunter confronts the source of her long-repressed trauma, ready for some heavy-duty capital-A Acting. Mirabella-Davis recalls this day very clearly. “We shot the whole thing in one take. Haley got it the first time. What you see, that was it.” Suffice it to say that Bennett conjures vulnerability and willpower and composure under duress on a level that few actresses of her generation have shown themselves capable of accessing. She credits Catherine Deneuve’s performance as a manicurist losing her grip on reality in Repulsion as the basis for Hunter’s spiral of self-preservation.

Mirabella-Davis arranges his film as a clinical unpacking of Hunter’s deep-seated hurt, hidden inside a gut-wrenching display of Cronenbergian visceral gore, hidden inside a drama of domestic claustrophobia in the lineage of Todd Haynes’s Safe. She handled it all ably, calibrating each choice to detach or expose to suit a thorny script. “I was so fortunate that Haley decided to take on this role, because she knows how to convey layers of emotion,” the director says. “Hunter wears many masks through out the film, the first being how she reflects normalcy and her husband’s image, then the second being her doubt about whether she is where she belongs, and then the third being a primal, truer self emerging. Haley can give you all this with just a twitch of her eye, or a glance in the mirror.”

“It’s about expectations, mostly the expectation to adhere to an idea of the status quo,” she counters. “From my point of view, and this is one of the reasons that this film was personal to me, being an actress entails getting told what to do, where to stand, how to dress, what to say. You’re subject to a feeling, sometimes put on you by yourself, that you have to be perfect. It can be overwhelming, and the film takes a glaring look at that experience.”

More than any wince-worthy coughing-up of blood, that ease of identification is the reason Swallow leaves its captive viewers doubled over in their seats with sympathy pains. In one version or another, everyone understands the sensation of needing a reprieve from a life they didn’t sign up for, and of being unable to stop doing the thing that provides that reprieve. It doesn’t have to be fitting a toy soldier down your throat without gagging; that’s just another self-destructive behavior designed to bring temporary relief. To whatever extent the film qualifies as horror, the focus remains on Hunter’s survival, the traditional “final girl” of slashers past having been traded for a more commonplace figure grounded in humanism. She embodies a new wellness that starts and ends in the self, an ideal to which everyone can aspire.

“I think of the film as more about her arc of recovery than the horror of what she goes through,” Bennett says. “She’s not defining herself by this. Neither does Carlo.” 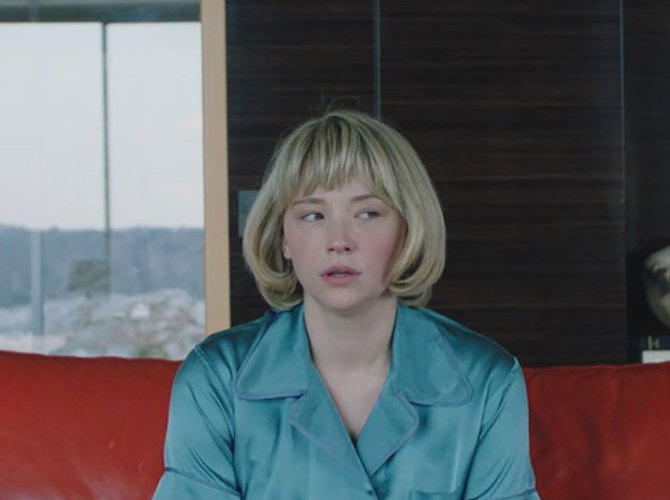