From "Casablanca" to "Call Me by Your Name," fans prefer sad endings.

Lady Gaga’s new “A Star Is Born” is about to hit theaters, telling a love story full of pain and disappointment and tears.

And that’s not a spoiler. That’s a selling point.

The latest version of a Hollywood classic, it’s about one star ascending into the stratosphere while another falls to earth. And it’s absolutely guaranteed to leave yet another generation of fans sobbing in theaters.

That’s good — and not just for those who own stock in Kleenex.

Because the best movie romances aren’t the ones that fade out on a happily-ever-after. They’re films about what goes wrong in a relationship, dramas about people who are anything but made for each other. They’re stories about the way things fall apart, the true loves that don’t last.

Because those are the love stories that do last.

Shakespeare knew that: Romeo and Juliet, Antony and Cleopatra, Hamlet and Ophelia – not a lot of happy endings there. That’s one of the reasons those stories have survived. Love is a gamble, and you only appreciate that when you’re reminded of what you can lose when you go all in.

Of course, Hollywood’s always been a little resistant to feel-bad endings. The secret to success, insiders say, is a movie that sends you out of the theater happier than when you went in.

But even dry-eyed moguls know that, sometimes, what we really want — really need — is a good cry.

Classic movie love stories provide that. And if you have any doubt, just try to imagine your favorite big-screen romance — but with a new, upbeat ending instead of its reach-for-the-tissues finale.

Ask yourself: Would you love “Gone With the Wind” more if it faded out with Clark Gable saying “Frankly, my dear — of course I forgive you. Now, what’s for breakfast?”

Or if Humphrey Bogart told Ingrid Bergman “We’ll always have Casablanca” – and then took her on that plane to Lisbon, leaving Victor Laszlo standing there with Captain Renault? 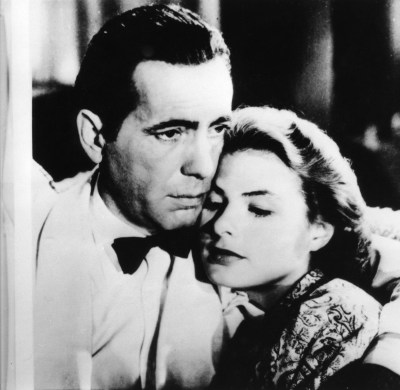 Or if “Now, Voyager” concluded with Bette Davis sharing Paul Henreid’s cigarette — and the name of a really great divorce lawyer so he could finally get out of that awful marriage?

“Dr. Zhivago.” “The Way We Were.”  “Titanic.” There’s a reason those films still thrill. And it’s not because their last shot was of two happy lovers holding hands and walking off into the sunset.

Frankly, even a romantic comedy is better if it’s bittersweet. The best thing about “Annie Hall” — apart from the fact that you could still watch Woody Allen in it without feeling a little sick — was that it ended with Allen and Diane Keaton realizing sometimes love isn’t enough.

What made “(500) Days of Summer” feel fresh — apart from that dynamite Hall and Oates musical number — was Joseph Gordon-Levitt’s discovery that this manic pixie dream girl was not going to change his life after all. (And the probability of him still repeating the same mistake.)

And it’s that willingness to go for the downbeat that makes movies like these linger while other, cheerier, cheesier rom-coms fade.

Which isn’t to say we only want unhappy love stories. It’s occasionally nice to be reminded that courtship can go beyond a swipe or two on Tinder, to be assured that connections can last beyond that one, awkward, morning-after brunch.

It’s also particularly important to the LGBT community, whose relationships rarely get big-movie respect. That’s changed a bit, recently. But, really, do all the new gay love stories still have to be so unhappy?

Couldn’t the women in “Blue Is the Warmest Color” find a way to make it work? Did Armie Hammer really have to dump Timothee Chalamet in “Call Me by Your Name”? Does the hopeless heartbreak of “Brokeback Mountain” have to be the new gay-movie template?

Still, as the perpetually-unlucky-in-love Dorothy Parker once wrote, “Lips that taste of tears, they say, are the best for kissing.” And every so often it takes the bitterness in sweet-and-sour love stories to remind us of how delicious romance really can be.

Movies like “A Star Is Born” (and “La La Land,” and “Moonlight” and “The Fault in Our Stars”) prove how precious relationships are, because they show us how fleeting they can be. And, if we are lucky enough to happen to be in one, they encourage us to appreciate that gift — and, maybe, hold onto that person just a little tighter.

And if these sad stories really manage to do that, to send us out of the theater not only sniffling, but also just a little bit deeper in love — well, that’s the happiest ending of all.

Where Have All the Big-Screen Comedies Gone?