After suffering injury and trauma in the military, these women are stepping up and giving back.

Veterans Kirstie Ennis (front) and Katelyn Sheehan will be attempting an all-veteran, all-female summit of Mount Denali in June. Their guides are also female. (Gary DeJidas)
By Rebecca Gibian

When Katelyn Sheehan, an Air Force veteran, pitched the idea of an all-women climb up Mount Denali to an organization that she was volunteering for—and who had already sent an all-male team go up—she was basically told that it was a “cute” idea, but no thanks. But Sheehan didn’t let that stop her. She did her research, cobbled together funding, and next month, Sheehan and Kirstie Ennis, a retired Marine Corps sergeant, will start their all-female, all-veteran ascent of North America’s tallest mountain. 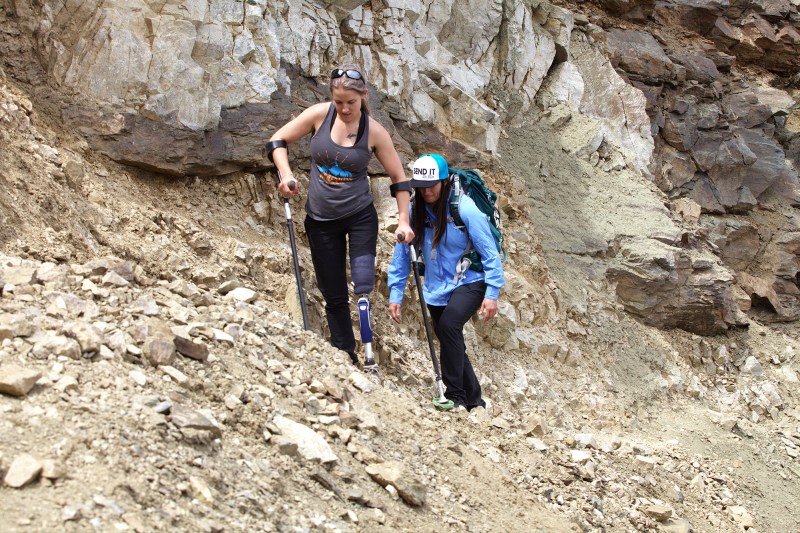 Veterans Kirstie Ennis (front) and Katelyn Sheehan will be attempting an all-veteran, all-female summit of Mount Denali in June. Their guides are also female. They are pictured here doing a training climb. (Gary DeJidas)

“There is something about being at a peak and looking back at your own footprints and seeing where you came from and knowing that you can go back,” Sheehan told RealClearLife. “And I think that it really translates into life.”

Sheehan and Ennis have both been through trauma in their lives, Sheehan explained, but that hasn’t stopped them from reaching peaks of all varieties, then returning to the ground, grabbing someone else and “show[ing] them the way, because we know the trail now and we can help them dodge some things.” 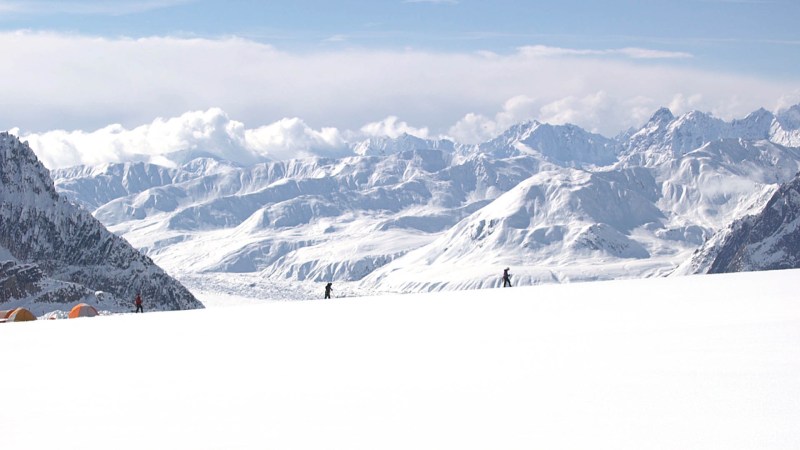 Kirstie Ennis and Katelyn Sheehan during a training climb for Mount Denali. Sheehan told RCL: “It’s not about ego, it’s not about crushing a mountain, it’s not about conquering something. That’s not the disposition that I appreciate approaching mountains with. It’s about enjoying the opportunity to challenge yourself with the potential of getting to a higher point than you’ve been. It’s a new perspective.” (Gary DeJidas)

Sheehan was only 17-years-old when she joined the Air Force in 2007, because they “got the coolest toys.” Hoping to become a linguist, Sheehan appreciated how much the service let her travel, and that she was able to get her college education debt-free. But during her first year of service, she was attacked, beaten and sexually assaulted by another service member.

“I definitely believed that I was on my own and that justice was not accessible to me,” she told RCL. “Looking at the other people who had been through similar circumstances in and around that time, a lot of them were involuntarily discharged and I didn’t want that to happen.”

Sheehan continued her service without divulging what had happened to her. Then she found solace as a victim’s advocate. She said that, for her, helping others just made sense.

“This happened to me because I was resilient enough to be able to help other people through it,” she said. “That was the narrative I had to tell myself in order for the world not to fall apart. That worked. And I had amazing opportunities to support people going through a trauma that I didn’t have support through, so that was awesome.”

That drive to help others has stayed with Sheehan.

“I didn’t let myself believe the now-I-am-broken narrative,” she said. “I think it is really important that that be part of the way we speak about trauma. Is that it is something that develops us, not something that demeans us, or diminishes us.” 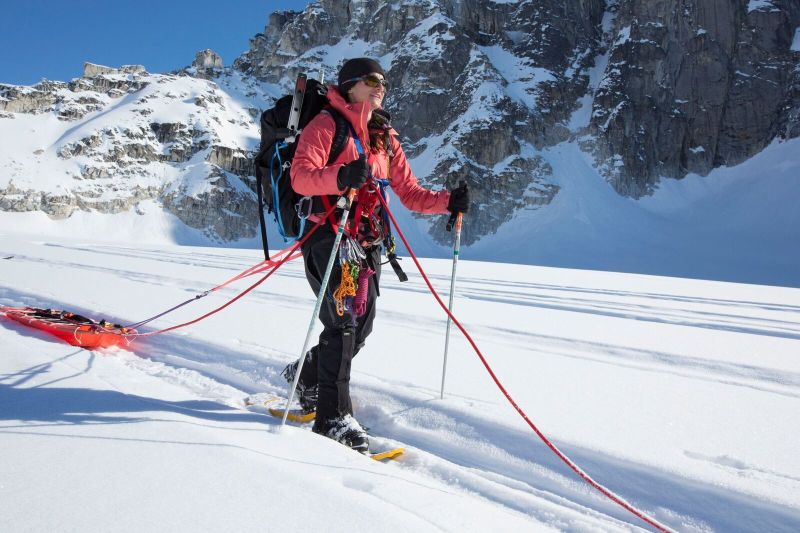 Katelyn Sheehan, an Air Force veteran, during a training trip. The climb is fully-funded by Building Homes for Heroes, a nonprofit that gives mortgage free-homes to veterans. The trip is also raising money for the organization. (Gary DeJidas)

The other half of the team, Ennis, also joined the service at 17-years-old and did two combat deployments with the Marine Corps as a helicopter air gunner and airframe mechanic. During her last deployment, she survived a devastating helicopter crash in June 2012, in Afghanistan. Since then, she had her left leg amputated above the knee, and has endured more than forty surgeries, according to ESPN.

But all that hasn’t broken her spirit of adventure. Ennis has already climbed Mount Kilimanjaro, becoming the first female, above-the-knee amputee to summit Africa’s highest peak. She would be the first in that category to summit Denali as well. She plans to hike all Seven Summits (Denali is the third highest at 20,320 feet), ending with Mount Everest in May 2019.

“I made it home, broken, but I made it. I am one of the lucky ones—I’m living, breathing, moving for the ones who never made it back,” Ennis said to RCL in an interview. 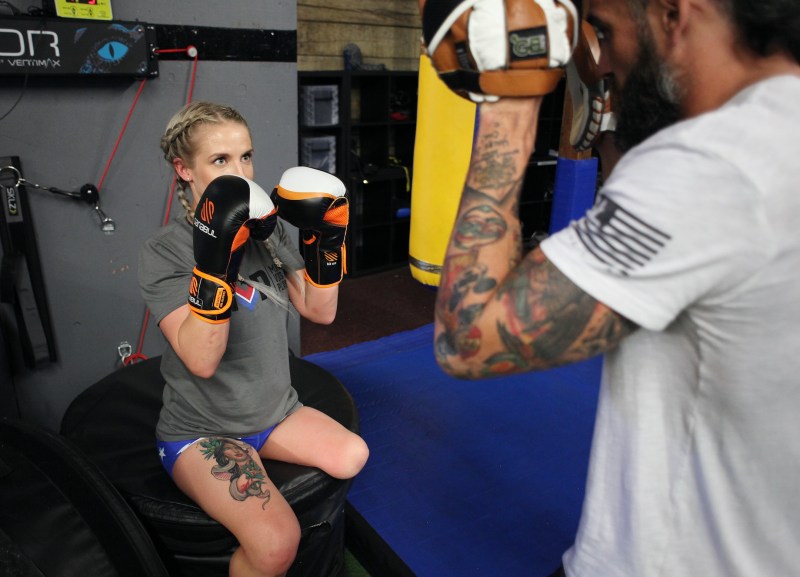 Veteran Kirstie Ennis —who had part of her left leg amputated after injuries from a helicopter crash in Afghanistan—trains for her upcoming Mount Denali climb by boxing. (Gary DeJidas)

Their mission will not be an easy one. According to the National Park Service, only 495 of the 1,189 climbers that attempted to summit Denali  in 2017 reached the top. Women comprised 15 percent of the total climbers last year, which NPS says is the highest annual percentage in history.

Sheehan and Ennis met through mutual friends and have been climbing together for about a year and a half. Ennis said that the two provide each other with an interesting balance.

“[Katelyn is] not as comfortable with risk as I am,” Ennis said. “She provides a different perspective and different skill set. She’s willing to be a work horse to let me succeed.”

Sheehan, meanwhile, calls Ennis and her the “perfect odd couple.”

“We both develop each other and somehow when it comes to sticky situations we are on the same page, 100 percent,” she said.

Sheehan, who is a glacier guide and also leads treks for a company that does backcountry trips for veterans with disabilities, said she sees nature as a kind of medicine. She said the wild terrain offers her a healing aspect that she had never been exposed to before. 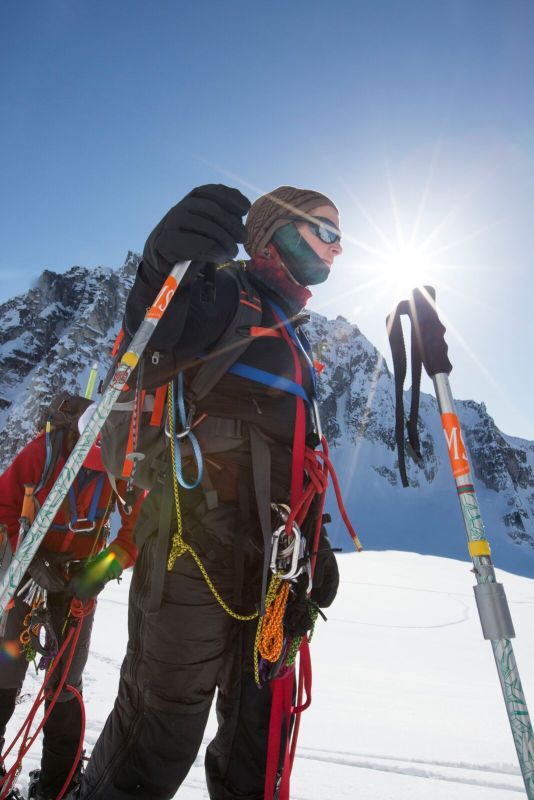 Kirstie Ennis during a training trip for Mount Denali. Ennis would be the first female above-the-knee amputee to summit the mountain, which is the highest peak in North America. (Gary DeJidas)

Sheehan believes that the wilderness can help with “military deprogramming and community re-programming” that she feels needs to take place when U.S. veterans leave the service. She explained to RCL that veterans often feel rudderless when they leave service: they are longer in the active military, but they aren’t really civilians either. She believes in offering more ways to get veterans back into their communities and help them find identities that still have purpose and still involve service to a cause bigger than themselves.

Women veterans, in particular, tend to face greater obstacles when it comes to re-assimilating into the civilian world. “Women veterans struggle more readapting back into society and I think it is because that message  ‘You’re alone, other women aren’t on your team,’ is really strong, especially in the military,” Sheehan said. She went on to say that finding sisterhood in Ennis has been “the greatest gift,” and she wants to share that with others, both veterans and civilians.

As for the Denali climb, Ennis is hoping that there are young women out in the world who are hoping to be inspired, and that this climb can provide that inspiration. 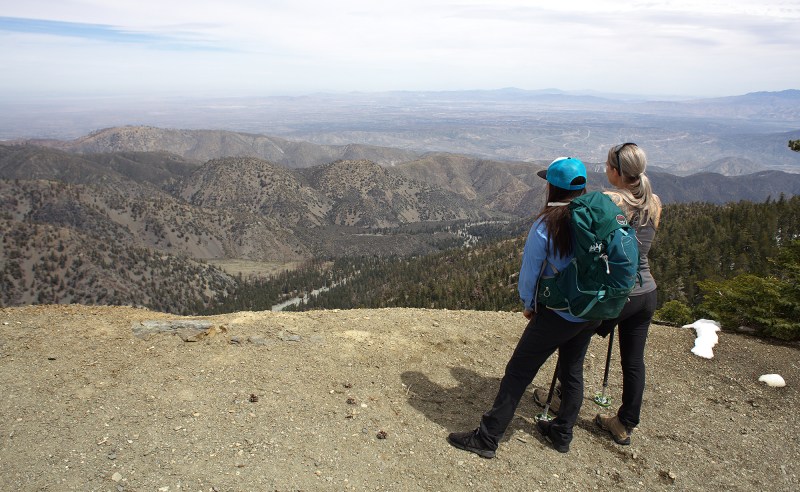 Kirstie Ennis (right) and Katelyn Sheehan (left) met through mutual friends and have been climbing together for a year and a half. Sheehan told RCL that there is “no greater bond” then tying in with someone and climbing in or out of a mountain. (Gary DeJidas)

“Anything is possible,” she said to RCL. “We control our circumstances, they do not control us.”

Sheehan believes that Ennis has already inspired others.

“Kirstie is an incredible woman, but she speaks to a resilience that is possible for every single person,” Sheehan said. “She’s not a superhero, she is just a person who decided, ‘Yes that happened, now what?’ And that’s an incredible thing to be a part of and to be able to perpetuate that message.”

Kirstie Ennis and Katelyn Sheehan train for their Mount Denali summit. “When we are roped together, that is literally me saying, if I fall you got me, if you fall, I’ve got you,” Sheehan said to RCL during an interview. “And that’s a huge promise and to be able to that for each other and to be able to say, at your weakest point, I’ll be strong enough for both of us.”

And if they don’t make it to the top of Denali this time?

“We’ll try again. There’s no way we wouldn’t do it,” Sheehan said.