From the air, U-2 pilots gathered intel on nuclear facilities on the ground during the Cold War.

Consolidated PBT Catalina amphibious aircraft, of the Black Cat Squadron, patrolling the coasts during the Pacific Campaign of World War Two, circa 1941-1944. (Photo by US Navy/Getty Images)
By Lee Ferran

Sitting in the cockpit of his Soviet-made MiG-17, Han Decai was frustrated.

Han, a fighter pilot for China’s People’s Liberation Army Air Force (PLAAF), had what seemed to be a simple mission: shoot down the spy planes that kept gliding over mainland China, spying on the communist nation. But there was an equally simple problem with that plan.

“We did our best to attack them, but the problem was the extreme altitude at which the U-2 flew: we could not reach them,” Han later told a CIA analyst. “The MiG-17 that I was flying at the time had a maximum altitude of 16,000 meters [approximately 52,000 feet], but the U-2s were flying above 20,000 meters [approximately 66,000 feet]. There was not much we could do against the U-2. Chasing a U-2 made for a pretty dull flight.”

The U-2 was, at this time at the beginning of the Cold War, on the bleeding edge of espionage technology – able to fly higher and farther than just about any spy plane, all while snapping relatively high-resolution photos of whatever was going on thousands of feet below on the ground.

That’s what made its pilots over China all the more surprising: some weren’t Americans, but Chinese nationalists, trained by the CIA and the U.S. Air Force, spying on their former homeland. Only a handful of pilots were chosen for the top secret missions. They were known as the “Black Cat Squadron.” 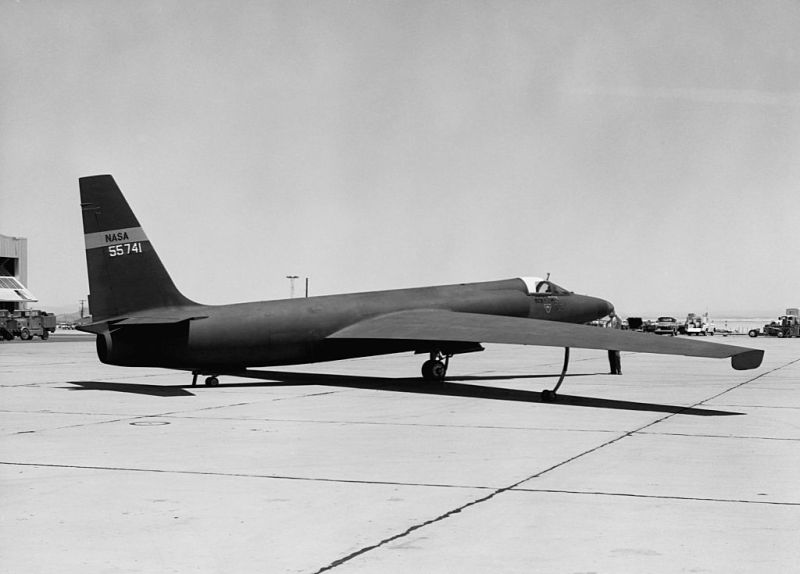 A Lockheed U-2 high altitude surveillance plane — like ones flown by the Black Cat Squadron — sits on the tarmac at Edwards Air Force Base. May 1960. (Getty Images)
Corbis via Getty Images

American U-2 pilots had flown across mainland China since 1957, but mainly to get to the Soviet Union to China’s west and do their spying there. China itself became a “prime target” when U.S. intelligence officials figured out that “the Russians were aiding the Chinese in the development of both missile and nuclear capabilities,” according to a history of overhead surveillance by former CIA analyst Dino Brugioni.

“At the time, it was clear that aerial and satellite photography would have to provide the bulk of the intelligence on Chinese nuclear and missile targets because so little information was available from other sources,” Brugioni wrote. “In some respects China represented a more challenging intelligence problem than the Soviet Union because we had so little collateral information on what was happening there.”

The CIA already had a longstanding relationship with Chinese nationalists, led by Chiang Kai-Shek, who had been forced to leave mainland China for Taiwan after a bloody civil war with communist Chinese in 1949. The Agency had provided the nationalists with spy planes before, but those were lower-flying aircraft that were far more vulnerable to being shot down.

By March 1959 U.S. intelligence officials pushed to give the nationalists the U-2 capability and sent a handful of pilots from Taiwan to Laughlin Air Force Base in Texas for training.

The program almost died the next year, however, when American U-2 pilot Francis Gary Powers was shot down over the Soviet Union, sparking an international incident and chilling the White House’s enthusiasm for the overflights.

But with the help of the CIA and the approval of the White House, Lockheed Martin, which made the U-2, was able to come to a deal with the nationalists selling “several” U-2s for $6 million – ground crew and technical services included.

The Black Cat Squadron began flying missions over mainland China from Taiwan in 1962 and quickly became the bane of PLAAF fighter pilots like Han’s existence.

“Every time a U-2 reconnaissance flight was detected in our sector, we sent up two aircraft to track it,” Han later wrote. Han said the planes would fly as high as they could, but still they couldn’t see the U-2.

“All we could do was try to reach the U-2 with a zoom climb… In the end, there was nothing we could do with our aircraft against the U-2. We had to leave the job to our surface-to-air missiles,” he said.

The surface-to-air missiles, however, were a real threat. A CIA report says a SA-2 anti-aircraft missile brought down a U-2 flown by a Black Cat in September 1962, and then another in November 1963.

Brugioni wrote that the CIA tried to help the nationalists by identifying and locating the SA-2 batteries, but the communist Chinese “began playing a shell game, moving the SA-2 sites about, and even camouflaging them.

“The [CIA] branch chief responsible for the searches came to me and demanded to be removed from the operation because the danger of a SA-2 site being moved between missions was great and he did not want to be blamed if a Chinese U-2 was downed,” he wrote.

By 1966 the Black Cat Squadrons were suffering enough losses that the CIA said it had become “very dangerous to fly the U-2 over the mainland.” Luckily for the Agency, over the next couple years satellite technology improved enough that the Black Cat flights weren’t necessary.

“The last U-2 overflight of mainland China took place in 1968,” the CIA said, though the nationalists continued to fly along the “periphery” of the nation until 1974.

“The Black Cat U-2s had done their job well,” the CIA report says. “The photography they brought back enabled U.S. intelligence to monitor the development of China’s nuclear capability… This knowledge was deemed critical at the time and could not have been acquired any other way.”

In all, the Black Cat Squadron had “penetrated the Bamboo Curtain,” as the CIA put it, 102 times, had five aircraft shot down, had three pilots killed and two captured.

It Took a Minute, But People Are Realizing That Beyond Meat Burgers Aren't Healthy
We Went to the Opening Night Party for Woody Harrelson’s New Dispensary
I Have Some Questions About Megan Fox's Jumpsuit Crotch Hole
Jack Daniel’s Just Released Its Best Whiskey Ever (And It’s About $30)
Harry Benson Reflects on His Decades of Photographing Paul McCartney
Alton Brown’s Bloody Mary Recipe Will Save Your Sunday Morning

Andy Summers and Stewart Copeland Recall The Police’s Pre-Fame Days
On “Men” and the Heavy-Handedness of Highbrow Horror
Opening Night at Cannes 2022: Can Cinema Save Us From Ourselves?
Turns Out Gen Z Has One Surprising Drinking Habit
The 12 Best Luxury College Graduation Gifts to Give in 2022
Save on Swimwear During Everlane’s Summery Sale
10 Designer Basics Worth Every Cent of the Splurge
The Case for Internal Condoms
What’s the Deal With Co-Working Spaces in 2022?