Two armies faced off on a frozen lake in 1242 and set the course of history.

It was a scene straight out of “Game of Thrones.” The knights and cavalry and infantrymen of two armies, already weary from battle but reinvigorated for a final face-off across a huge frozen lake. The winner would determine borderlines for centuries.

That was the case on this day way back in 1242 on Lake Peipus when Russians faced off against Catholic crusaders from the west in what came to be known, aptly, as the “Battle of the Ice.”

At the time a religious order known as the Teutonic Knights, crusaders who originally fought in the Middle East, had turned their attention to Eastern Europe and set about conquering land there for the Roman Catholic church.

By 1241 they had captured the Russian city of Pskov, close to the border of modern-day Estonia, and threatened the city of Novgorod further east.

But then Novgorod called upon Prince Alexander Nevsky, who would become one of Russia’s first military heroes, according to The New Republic. Nevsky had already led a victory over Swedish invaders in 1240 and he rallied the Russians against the Teutonic Knights as well.

As a Russian account tells it, “Feeling a new danger, the people of Novgorod, led by Prince Alexander Nevsky rose against the enemy.” First Nevsky and his men recaptured Pskov, after which he is said to have remarked, “Lest they should boast, saying, we will humble the Slovan race under us – for is not Pskov taken, and are not its chiefs in prison?”

But the knights stopped running after they reached Lake Peipus. There, on the desolate, frozen expanse, the two sides faced each other. 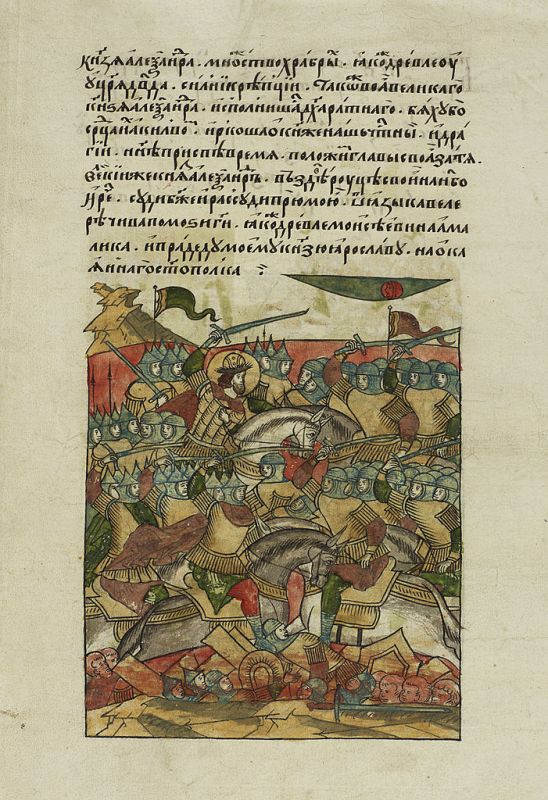 “At dawn of April 5 the crusaders formed up their army in a triangle, the sharp angle of which was turned towards the enemy,” the account says. “Alexander Nevsky placed the main force not in the center, which was usual for Russian troops, but at flanks. In front of the Russian army was an advanced detachment of light cavalry, archers and slingers. The rear of the Russian battle formation was turned towards the precipitous eastern shore of the lake. Prince’s major cavalry lied in ambush behind the left flank.”

The account says that as the two sides approached each other, the Russian archers rained down a “shower of arrows” on the knights, but the armored crusaders still managed to defeat the first regiment of Russian forces. But they had walked into Nevsky’s ambush and were attacked on two sides.

Another historical account said that what followed next was a “great slaughter.”

“The battle lasted til the late night,” the Russian account says. “When the knights wavered and ran, the Russians chased them… Thin coastal ice started to collapse under the horses and heavy armored crusaders.” (Though that last detail is apparently contested by some historians, according to National Geographic.)

In the end “countless” fighters were killed, the historical account says, but the knights were pushed back from Russian lands.

Eventually the Russians and the order signed a treaty and exchanged prisoners, ending the conflict for the time being.

But the battle set borders that remain to this day – Lake Peipus currently divides Estonia and Russia. Nearly a millennia later, there is still tension over the oft-frozen waters.

“At dusk, viewed across its white sand beaches, the lake is a picture of Baltic enchantment; fishermen trawl the waters for pike-perch as the sun sinks,” the Financial Times recently put it. “Tourists come to swim in the lake’s tideless waters, to pick raspberries in the forests and to loll in the wood-burning saunas – but night and day, Lake Peipsi [Peipus] is patrolled by border guards. During the summer, the boundary line between Russia and Estonia is marked out by buoys; during the winter, by fir trees drilled into the ice.”

It’s a border that could have looked very different if the epic April 5, 1242 “Battle of the Ice” had gone another way.