Brigadier General Theodore Roosevelt, Jr., seen in Ste. Mere-Eglise on July 12, hours before he died of a coronary thrombosis. Arthritis caused him to walk with a stick. The 4th Infantry Division commander described him as “the most gallant soldier and finest gentleman I have ever known.” (US Gov)
By K.S. Bruce

You are hitting Utah Beach in the very first wave, into the teeth of the German army, against a rainfall of enemy gunfire, artillery shrapnel and gore. You are filled with fear.

And there on the beach in front of you, stands an old man.  An American brigadier general — bull frog-voiced, pop-eyed, 5-foot-8 inches tall, and directing traffic with his cane.  Calm as a man can be in combat, he is Ted Roosevelt, Jr., the son of the famous president and the only general on the beach (Jr. was actually technically Teddy Roosevelt, III, but had adopted the “Jr.” moniker from boyhood — his father having never claimed it himself). 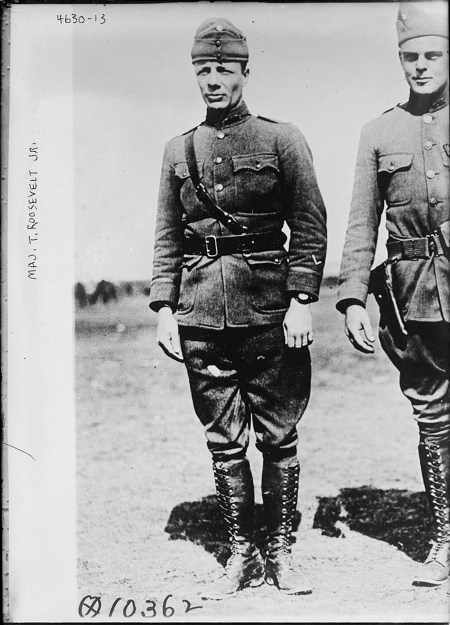 Photograph circa 1918 shows Theodore “Ted” Roosevelt Jr. (1887-1944), the son of President Theodore Roosevelt, who served in World War I. (Library of Congress)

At age 56, he had volunteered to be on the landing boats in order to give the young troops reassurance and to arm them with his same fortitude and courage.

How many invasions had Ted Jr. participated in during the first half of the Century?  Basically, all of them.  As a combat officer in the 26th Regiment of the First Division (later to be known as the “Big Red One”) during World War I, Ted Jr. helped lead the American entry into France.  In 1941, he was back again to help lead the same regiment for Project Torch in the amphibious invasion of North Africa during World War II. He battled into Sicily.  He was with the Fourth Division at the tip of the spear on D-Day.

Ted Jr. was an unusual solder in many ways. He carried a copy of Pilgrim’s Progress into combat to read during the lulls. He would write detailed letters home about each battle to his beloved wife, Eleanor. Legend has it, that when he and the Utah Beach landing troops realized they had been dropped one mile away from their designated site, it was Ted Jr. who studied the map and calmly opined, “We’ll start the war from here.”

Ted Jr. grew up in wealth on Sagamore Hill, one of four brothers (Ted, Archie, Kermit and Quentin) and two sisters (Ethel and older half-sister Alice).  His famous father would lead the children on “point to point” rambles through woods and swamps. No obstacle could be evaded by going around it; each challenge had to be faced head-on and climbed, swum, or crawled there as it stood. 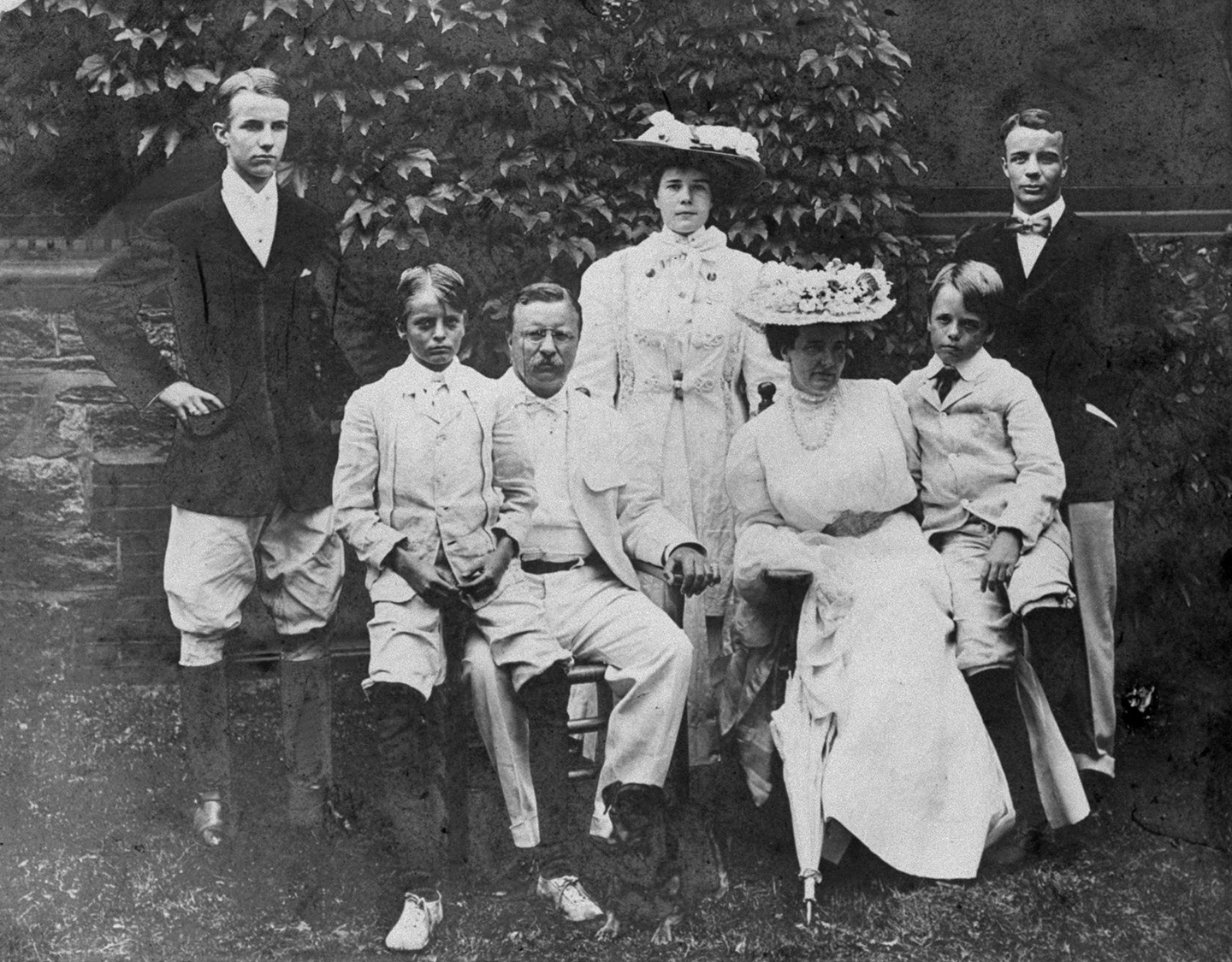 President Teddy Roosevelt had grown up with a unspoken shame that his own father had purchased his way out of Civil War service—as was allowed at that time.  He overcame that sense by volunteering for the Spanish American War and joining in the famous charge up San Juan Hill with his fellow Rough Riders.

Teddy’s sons were schooled in that same mindset of duty and military obligation— and the family paid a heavy price.  The youngest son, Quentin, was shot down and died as a fighter pilot in World War I.  Kermit served in World War I and II, and ultimately committed suicide. Archie retired with 100 percent disability after being shot in the knee in World War I but, like Ted Jr., insisted on coming back for World War II. Archie served in New Guinea, where he was disabled (but survived) again, and was awarded the Silver Star with three oak clusters.

Ted Jr.’s own son, Quentin, was also in the first D-Day wave, landing on Omaha Beach. He survived, only to die in a plane crash in China several years later.  Kermit’s son, Kermit Jr., led the CIA action to restore the Shah of Iran, seeking to avoid the Communist alternative.

Ted Jr. himself survived the D-Day landing, but died in France five weeks later— on July 12, 1944—from a heart attack.  He was awarded the Medal of Honor, and later so was his father, President Roosevelt.  They, along with Arthur and Douglas McArthur, became the only father and sons to ever both win a Medal of Honor. Ted Jr. is buried in Colleville-sur-Mer, France, alongside his younger brother, Quentin. 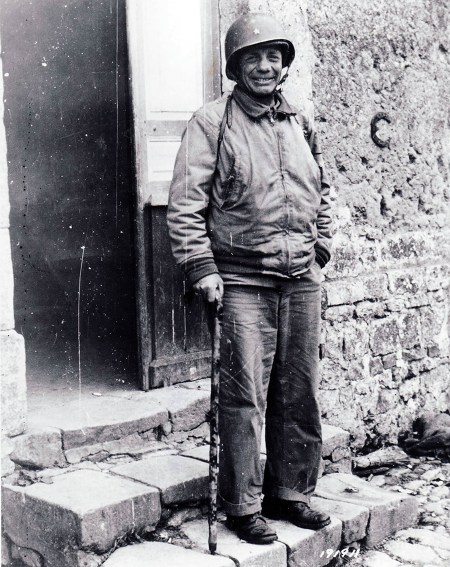 Brigadier General Theodore Roosevelt, Jr., seen in Ste. Mere-Eglise on July 12, hours before he died of a coronary thrombosis. Arthritis caused him to walk with a stick. The 4th Infantry Division commander described him as “the most gallant soldier and finest gentleman I have ever known.” (US Gov)

Between World War I and World War II, Ted Jr. sought major political office without success.  He reached the New York State legislature and founded the American Legion, but lost the New York governor’s race in 1924 against Al Smith; this was a time when New York was the most populous state and its governorship the best route to the presidency. Fifth cousin Franklin won that same governorship in 1928. (“Our side of the family has the looks”, FDR’s mother allegedly opined.)

President Roosevelt was described as a dilettante soldier and a first rate politician, while Ted Jr. was described as a dilettante politician and a first rate soldier.  Between elections, Ted Jr. served as governor general of Puerto Rico and the Philippines, and joined brother Kermit to hunt the ovis poli mountain goat in Kashmir for Chicago’s Field Museum, and to seek out (and find) the then-elusive panda species in the wilds of Szechuan China.

President Roosevelt may have been both proud and regretful of his militaristic impact on his sons.  After publicly addressing his son Quentin’s death with stoicism, Teddy and his wife Edith reportedly rowed far out into Oyster Bay in a small boat to mourn in private.  When tempted by an offer to have a special monument in France built for Quentin,  Teddy was asked by his equally noble wife, “And who will build the monument for all the other sons who died?”

July 12, 2017 marks the anniversary of Ted Roosevelt Jr.’s death.  The story of Ted Jr. and his brothers are told in the recent book His Father’s Son by Tim Brady.

It is a good time to honor their memory and the memory of so many others that have faced danger with fortitude. They teach us to show courage and nobility against hard odds.

K.S. Bruce writes the “In This Corner” column of opinion (and occasional humor) for RealClearLife.

The Paloma Is the Ideal Drink for Summer
Trevor Bauer's MLB Suspension Could Impact Baker Mayfield's Future in NFL
Andy Summers and Stewart Copeland Recall The Police’s Pre-Fame Days
It Took a Minute, But People Are Realizing That Beyond Meat Burgers Aren't Healthy
Mick Jones and Paul Simonon on The Clash’s “Combat Rock,” 40 Years Later
How Difficult Is It to Ride One of Those Electric-Powered Surfboards?

How Difficult Is It to Ride One of Those Electric-Powered Surfboards?
Jack Daniel’s Just Released Its Best Whiskey Ever (And It’s About $30)
What It Was Really Like Inside Anna Delvey’s NYC Art Show