Mushrooms are sustainable, satiating and sapotrophic. A buzzy lab called Smallhold is making sure they finally get their due.

In this circle of life, mushroom flushes burst through discarded blocks of lumber.
Deidre Lewis for Smallhold
By Tanner Garrity @tannergarrity

Smallhold’s Brooklyn Navy Yard outpost, the very first of the buzzy agtech startup’s indoor “macrofarms,” is its smallest, at around 9,000 square feet. But the space is capable of growing a hell of a lot of mushrooms — surrounding a central atrium are five distinct chambers, each of them guarded by bank vault-sized doors, suspended in arctic mist and housing rows of flushes at various stages of development.

I’d told a friend, before taking a Citi Bike over to the farm, that I’d see him after my “Wonka tour.” I was kidding, but there’s definitely something Dahlian to a cropping of golden-capped, yellow oyster mushrooms that have sprung from a bag of rotting sawdust.

Americans don’t typically think of mushrooms as exciting or fantastical. They still pop up on “least favorite vegetable” lists (even though they’re fungi with a fruiting body) alongside turnips and radishes, and most dissenters complain about their rubbery, one-note mouthfeel.

But consumers haven’t exactly been set up to succeed — in reality, there’s been an astonishing lack of diversity in mushroom choice and manufacturing over the last 150 years. Consider: three of the mushrooms we’re familiar with spotting at grocery aisles or in restaurant risottos are actually the same species, harvested at different stages of growth. Button, portobello and cremini mushrooms are all Agaricus bisporus.

Even crazier, over half of the country’s mushrooms are grown in the same town in southeastern Pennsylvania: Kennett Square. In what amounts to an unprecedented quirk in farming history, the monopolistic monoculture formed after a few enterprising Quakers brought spores back from Europe, and hired laid-off Italian immigrants to work the land about 40 miles outside of Philadelphia. Many of those workers ended up owning their own farms. These days, a water tower proclaims the hamlet the “Mushroom Capital of the World.” Just 60 farms are responsible for 500 million pounds of mushrooms a year. 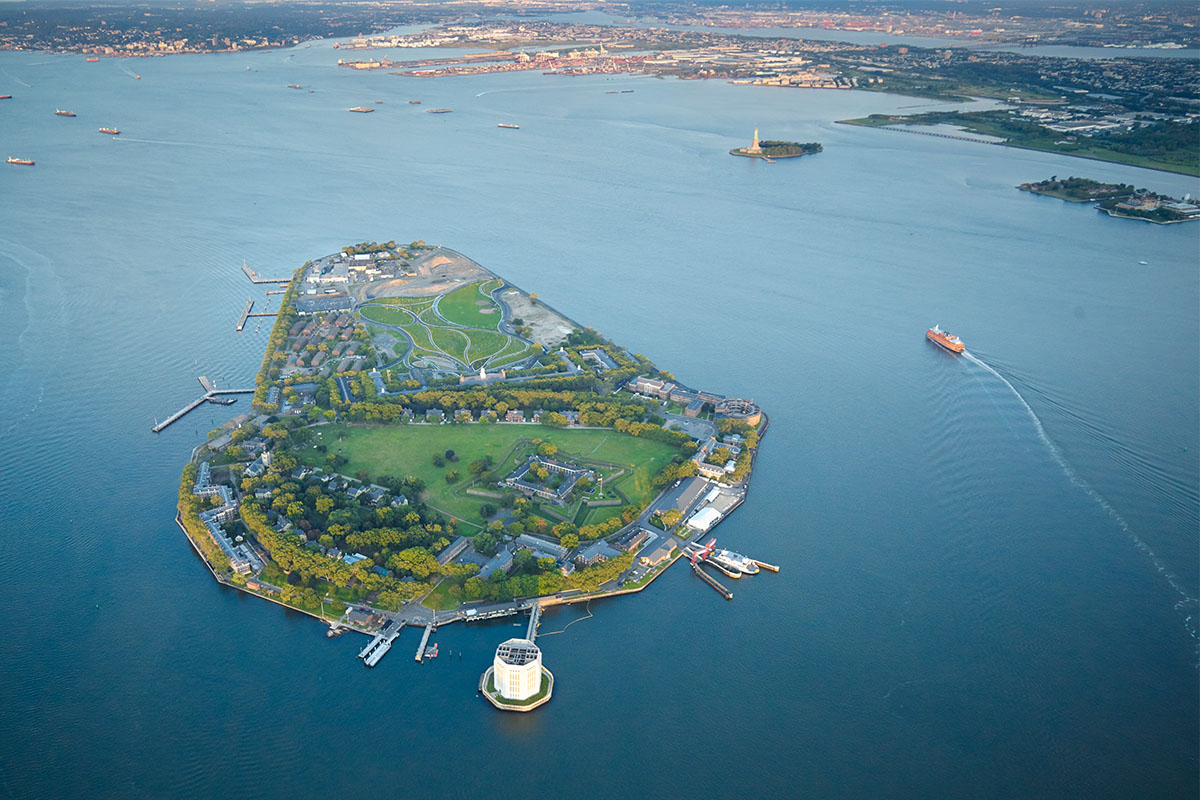 If ever an American market were due for some fresh ideas, then, it’s the kingdom of fungi. It’s a surprise it’s even taken this long: mushrooms are satiating, sustainable and sapotrophic (that’s to say, they feast on organic matter, which makes them incredibly efficient), a holy trinity that’s rare amongst crops in the vertical farming and aquaponics space. Andrew Carter, the co-founder of Smallhold — and an alum of multiple indoor farming labs — saw buckets of untapped potential.

After years of growing microgreens (which look and taste great, but are a hard sell to carnivores who commonly claim that they’d “never feel full” without a cut of beef, chicken or pork on their dinner plate), Carter turned his attention to mushrooms. He started with a shipping container near the Williamsburg Bridge in Domino Park, in 2017 (there are now sandy volleyball courts over there), and eventually graduated to the farm off the Brooklyn-Queens Expressway.

Smallhold grows and sells six different types of mushrooms: yellow oyster, blue oyster, lion’s mane, maitake, shiitake and trumpet. They all look different. They all taste different. Sizable blue oysters are grilled like steaks; the buttery caps of trumpets can be seared up like scallops; and lion’s mane, which I got to peel apart with my own hands, has the perfect, flaky temperament for crab rolls.

In a post-pandemic landscape, Smallhold’s business model is mostly predicated on selling to big box supermarkets. Their strong relationship with Whole Foods, where you can find the six different mushrooms in distinct cardboard packaging, is one reason they’ve been able to expand to both Austin, and Los Angeles, where Smallhold opened a 34,000-square foot facility this past May. The mushrooms are now in hundreds of grocery stores.

At first glance, Smallhold’s differentiator seems to be surface-level cool. The brand cultivates vibes almost as well at it cultivates mushrooms. Why settle for boring buttons from Amish country, when you could support a stunty, mysterious, outer borough lab? Smallhold has merch. (Which its designer calls “fucking tight.”) It’s floating the idea of throwing dinner parties in the atrium of its Navy Yard farm. And it’s in some of New York’s coolest restaurants — not just on the menu, but physically, literally there. For years, Smallhold has installed “minifarms,” capable of growing 60 pounds of mushrooms a week, in a menagerie of establishments: above a bar at The Standard Hotel, at the front of house in a happening Vietnamese joint, along the wall at a nonprofit girls club.

These units aren’t just for the look, though, and Smallhold isn’t just a lifestyle brand. They’re functioning tanks, equipped with misters, LED lights and 4G technology. More mushrooms is always the idea. During the height of COVID, Smallhold kept its spores spreading by selling grow kits. In-house, Carter likened them to the “victory gardens” of World War II. Smallhold hawked bags of decomposing wood, laden with basidiospores, for $34 a pop. Quarantining adults — DIY veterans after baking banana bread for weeks on end — simply had to make an incision in the bag, tie the end with a rubber band and spray the same area two to three times a day. About a week after the initial mushroomlings started to form, they could expect mushroom caps ready for the kitchen.

I was shocked to hear that a neophyte could so easily grow a flush of lion’s mane mushrooms in their own home. If it’s really that simple, are high-tech facilities necessary? But the macrofarms allow Smallhold to grow mushrooms en masse, — which is sort of essential if you’re filling orders for Whole Foods, Eleven Madison Park, or Brooklyn Grange, a rooftop garden in Sunset Park that has one of the city’s most popular sliding scale CSAs. Smallhold was delighted to inform me that they supply the mushrooms for the program.

Besides, the ease with which mushrooms cultivate shouldn’t be a knock against the complexity of the crop; it’s actually another vote of confidence that fungi are sustainable workhorses, which don’t require the gallons of water or growth agents requisite to produce other foodstuffs. Budding mushrooms feast on nature’s dead scraps. Their mycelium (the roots), work their way through the hunk of sawdust, searching, all the while, for a bit of air to breathe in and a bit of moisture to drink. Smallhold knows exactly when to intercede in this process, and exactly how to discourage the spores from swirling to other hospitable nooks and crannies. (The HVACs do yeoman’s work in this department.)

It’s tempting, in light of hydroponics’ meteoric rise — venture capitalists are investing hundreds of millions of dollars in vertical farming — to portray Smallhold as another face of the indoor revolution. But farmers have grown mushrooms indoors for decades. Game-changing facilities, of the sort that will make wacky harvests (say, oranges in Sweden) a year-round occurrence, will involve top-line robotics and diverse ingredients lists, in order to justify the dollars lent. That’s a different field entirely from the operation at Smallhold.

Still, the Smallhold model deserves credit. Its Brooklyn macrofarm is a 1.6-mile bike ride away from my closest Whole Foods. That level of proximity is absolutely unheard of, and especially for mushrooms, which, again, are overwhelmingly shipped from the same rural town in Pennsylvania. One reason Kennett Square doubled down on button mushrooms all those years ago? The other specialty mushrooms don’t travel well. They bruise on trucks and trains. They lose their nutritional value and their farmer’s market value as they criss-cross the country — their transport vehicles adding emissions to the atmosphere all the while.

It’s a rather superfluous arrangement for a species that asks for so little. As my Smallhold tour guide pointed out to me: in the “wild,” just one dewy morning can trigger the growth of brand-new mushrooms under the tree in your front lawn. Mushrooms emerge from practically nothing, and the nothingness from which they’re born can be composted immediately back into…nothing. (Smallhold hopes to compost eight million pounds of substrate by the end of the year.) That planet-friendly process deserves better than long-haul deliveries.

Which is why Smallhold started within spitting distance of eight million people, and promises to only build macrofarms near city centers, instead of creating a mother ship-megafarm that might compete for mushroom domination throughout all of America. It’s almost dizzying, how comfortable we’ve become with how far our food has to travel to reach us. The other day, I ate a can of Trader Joe’s tuna from Thailand. I have fish markets a couple blocks from me in either direction. What’s stopping me from bringing my business local? Is it price? Convenience? I’m embarrassed to admit that more often than not, it’s pure ignorance.

Smallhold’s willing to play ball with younger audiences, and do what it takes to get its message out. Expect a heavier social presence soon, with a deeper foray into TikTok. Pandemic hiccups aside, the farm’s arrived at a perfect time — searches for meat alternatives have more or less broken Google Trends over the last few years, and already, some consumers are starting to catch on to the fact the faux stuff, from Impossible Foods and Beyond Burger, should probably be considered a salty, every-once-in-a-while treat, not a go-to. Mushrooms, in their many, underappreciated forms, represent another option. (And a low-calorie one packed to the literal gills in protein, fiber and antioxidants, at that.)

There’s a lot to like about Smallhold, from the distinct lack of plastic in its packaging, to the livable wage it pays its employees, to this cookbook, which contains a recipe for Salted Caramel Shiitake Mousse. Most compelling, though, is the swirling, pervasive sense that we’re seeing mushrooms for the very first time. As if they’ve only just been discovered, or accepted as a gift from some spacefaring civilization. Fortunately for the open-minded among us, these colorful flushes have also never been closer. I walked home from a farm to my apartment the other day. That’s one sentence I never thought I’d write.