Review: Saucony's Endorphin Pro Is One of the Fastest Running Shoes Ever Released 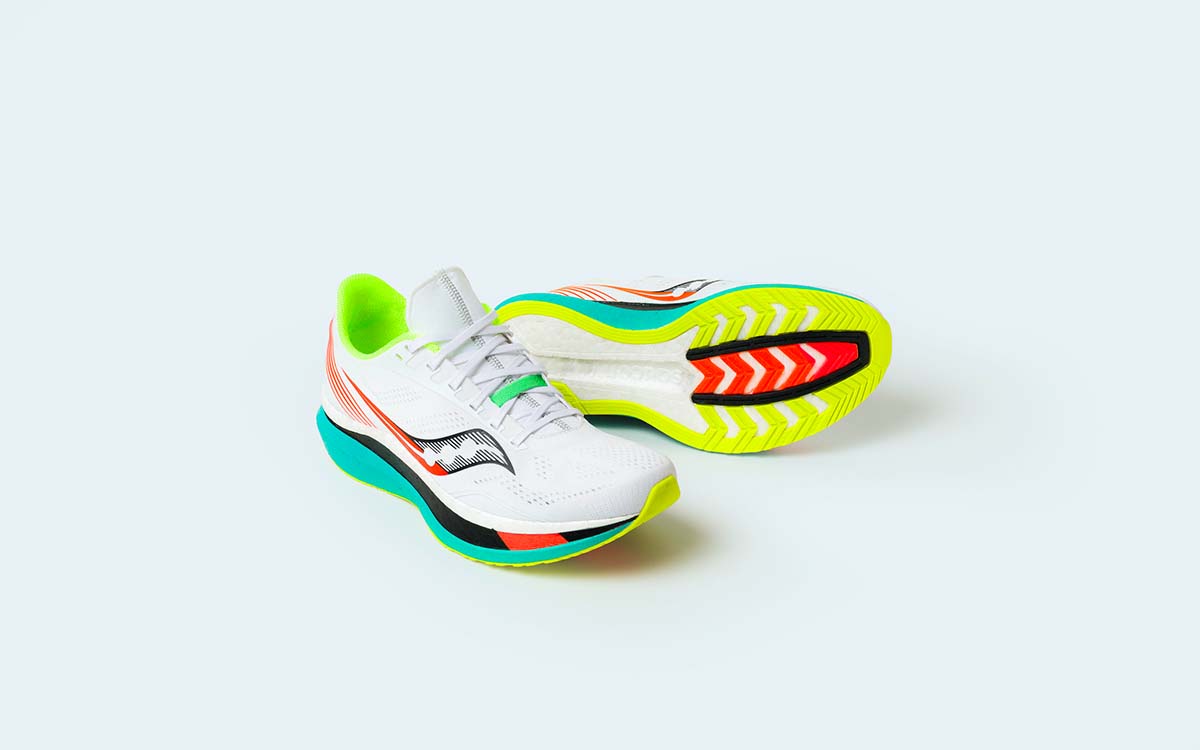 2019 was the fastest year in running history.

Over 13 months, the five quickest men’s marathons ever were recorded, the women’s world record was lowered a full three minutes, and a Kenyan named Eliud Kipchoge went right ahead and did the unthinkable, breaking the 2:00:00 barrier. The primary protagonist in those achievements, though, wasn’t Kipchoge, or Brigid Kosgei, or any of their generationally talented runner-ups. It was a shoe.

Nike’s Vaporfly 4% became iconic, infamous and inseparable from last year’s running season, while synonymous — for most casual runners, at least — with the carbon-plated revolution. The globe’s top runners were suddenly setting PR’s that weren’t supposed to happen for another 55 years, and all of them were doing so in Nike’s new, neon, high-top moonshoe racer, a sneaker which featured so much technology that one journalist compared it to running with an extra leg muscle. The publicity naturally led to a debate over the shoes’ long-term legality, and discussions on the influence of technology on sport and its record books; Nike sold them all out regardless.

One misconception about carbon-plated shoes, though, is that Nike is the only brand in town that actually understands the technology. Not only have other brands released (or are in the process of releasing), their own versions — the Hoka One One, the Adidas adizero Pro, the New Balance FuelCell TC, the Asics Metaracer — many of these sneakers are not just a reactionary drop to last year’s Nike victory lap. This point is especially relevant for Saucony’s Endorphin Pro, a racing shoe I’ve had the opportunity to run in over the last month.

As early as October 2018, Saucony was sending runner Jared Ward shipments of carbon-plated prototypes to test out. In a short essay published before the Endorphin Pro dropped earlier this year, Ward wrote about the deliberate approach he took to testing these early versions with his confidant Dr. Iain Hunter, Ph.D, a professor of Exercise Sciences at BYU. (Ward teaches statistics at BYU as a member of the adjunct faculty.) Of these models, Ward’s favorite was the GJXT16. With Ward hooked up to a machine that measures oxygen efficiency, cranking out 5-minute miles on a treadmill, the GJXT16 performed better than all the others, reporting a 4.4% advantage in running economy.

As the months wore on, Saucony continually tinkered with the GJXT16, introducing a a lighter-beaded foam to ease the load while running up hills, then a trimmed-down upper, then a smoother base. Eventually, the GJXT16 was given the name the Endorphin Pro, and Ward was given one final pair of shoes, which he wore last November as he raced across New York City’s five boroughs. He finished sixth in the marathon, as the top American overall.

There is an explicit reason why so many running shoe brands dropped carbon-plated sneakers this past spring — ahead of the Tokyo Olympics (which would’ve started July 24th), the World Athletics stipulated that shoes had to be commercially available for at least four months to be legal for competitive use. But it’s also abundantly clear, as I discovered when I first stepped into a pair of the Endorphin Pros, that they were released at this moment in time for another, simpler reason: they were just ready to go.

I’ve run (and subsequently beaten) personal bests in the mile and 5K multiple times in these shoes — and I’ve only had them for a month. There are a variety of reasons why, of course — a pandemic-commitment to running included — but I understand my running idiosyncrasies well enough to know the boost I get from these shoes. Like most running gear, they do arrive with a glossary of performance spec jargon: SPEEDROLL technology, PWRRUNPB cushioning, FORMFIT, 3D Overview comfort. In English, those terms just mean that the Endorphin Pro is a tall, springy, lightweight, highly responsive sneaker, built expressly for speed. A line from one of the marketing videos for the shoe sums this up succinctly. The Saucony rep said, “SPEEDROLL technology propels you forward, creating a feeling of continuous momentum, so you can run faster, not harder.”

By no means should a pair of Endorphin Pros function as your everyday road runners — the shoe’s construction essentially compels quick running (it puts you on your toes; think of high heels, just made with foam), plus the thin uppers would get rocked by any trail that’s heavy in rocks or roots — but if you’re looking for a reliable companion for tempo runs, virtual challenges, and real races, whenever they start up again, this is undeniably one of the fastest shoes on the market. There is no special sauce here, just years of innovation and hard work, but you’ll feel like you’ve already gotten with something every time you lace these up, hit your stopwatch and go.