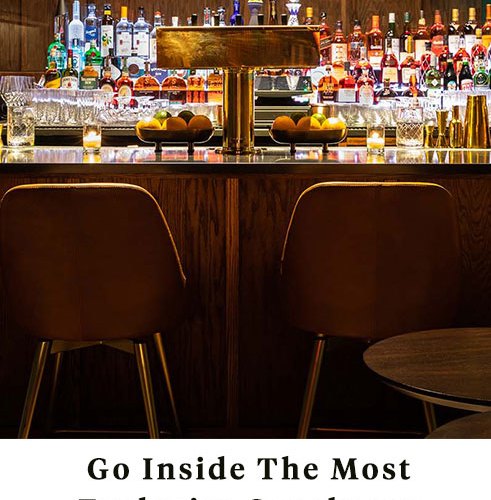 You enter J.Bespoke through an unmarked brass door at the back of Devoción Cascara + Coffee on 27th Street. It’s not dissimilar to other “hidden” speakeasies: low lighting, custom artwork, wood paneling, an intimate bar and a few tables and booths.

The difference is on the sides, where the walls are adorned with multiple 4K LED flatscreens, tuned to the nightly happenings of New York’s (mostly beleagured) sports teams.

On the surface, it’s an iffy concept: two enjoyable ideas that are polar opposites in practice. A sort of sex-and-pastrami-sandwich conundrum. But not to Eric and Jesse Jacobs, the two brothers (both formerly of the nightlife company the Gerber Group) who launched J.Bespoke in December.

“We’re sports fans, but we also struggled to find a bar where we could watch a game and enjoy a great cocktail,” says Eric. “It’s actually a very simple concept that didn’t seem to exist in New York. We just wanted to design an exclusive space where guests could enjoy an experience unlike any other.”

But can the loud, participatory and exuberant (or angry) atmosphere of a Knicks/Rangers crowd mix with the cerebral, quieter temperament of a cocktail bar that serves wagyu cheeseburgers and truffle fries?

“There were initial worries,” as Jesse told us. “But the great thing about the space is that it’s a hybrid, so it’s very adaptable — during some games it gets a bit louder and energetic, and during others it’s more relaxed.”

So while the bar will pipe in sound for larger events like the Super Bowl and the NBA Finals, watching a game at J.Bespoke is often a quieter affair. When we took in a meaningless Jets vs. Bills game on a recent Sunday afternoon, the TV announcers were turned off and an expertly curated and rather expansive indie-rock soundtrack was filling the room. At a modest level, too: we were able to strike up conversations at a normal, everyday volume.

And when there’s no game on, the TVs switch over to digital artwork and curated playlists that rotate based on the time of day or night.

Besides the lack of noise, there are no pushy crowds at the bar. “During normal hours we’ll plan to keep space seated, because we don’t want guests to feel crowded or uncomfortable,” says Eric, who notes that a few people will be able to enjoy cocktails at a small standing area near the entrance while waiting for seats.

Speaking of cocktails, the bar or concept wasn’t going to work without great drinks. And this is where J.Bespoke truly shines. Bar director Alejandro Dieguez (Stone Rose, Quality Eats, Garden of Love) has crafted a thoughtful cocktail menu that’s diverse without being too unconventional: besides a few originals, you’ll find a tequila-based Negroni, a hibiscus-infused Paloma and a Cuba Libre with some cascara (the fruit/skin of a a coffee bean) sourced from the Devoción cafe in front.

“I wanted to create cocktails that were approachable and easy to drink,” says Dieguez, who once played soccer on the Puerto Rican National Team (and promises Champions League knockout games will be on the viewing menu at the bar). “And I wanted to create cocktails for the typical guest who usually orders vodka sodas or basic mixed drinks. These are drinks they can’t resist trying.”

A few favorites during my visit: Call Me Bell (mezcal, lemon juice, orange bell pepper, basil), the Bespoke Old Fashioned (Old Forester, green chartruese perfume, orange & angostura bitters, demerrara) and the Nitro Cold Brew Martini, which is on tap and a collaboration with the Devoción crew in front. But do note: these are certainly speakeasy prices (cocktails are $17).

If you want to reserve space for the Super Bowl or any other major sporting event — or book a private party — you can contact the bar at host@jbespoke.com.

While none of the bars below are quite this fancy as J.Bespoke, the following are some other NYC-based sports dens that offer an elevated experience.

We know what you’re thinking: Uh, Sports is right there in the name … Doesn’t that make it a sports bar? But “Sports” is just a reincarnation of Walter Foods, the bustling gastropub that served excellent cocktails alongside oysters and a killer French Dip in Williamsburg for more than a decade after opening in 2008. It closed briefly last fall only to reopen as Walter Sports, which is basically Walter Foods with the addition of five big TVs behind the bar. Do they show sports? Yes. But the soul of the place is about great food and drinks above all.

Fun fact: I’ve never watched a sporting event at The Winslow, which caters more toward the British sports crowd (rugby, soccer) but still shows plenty of ESPN favorites — often with the sound off and music on. The vibe is more “upscale pub” than speakeasy and it’s great for meeting larger groups, and the specialty drinks here are mainly crafted from 40 different brands of gin … not your usual Sunday afternoon sipper.

Opened in 2018, the cozy Due West offers up DIY Old Fashioneds, bottled cocktails, small plates, rotating sets of artwork on the wall and, surprise, a real appreciation for sports (at least the big games).