These New Restaurants Are About to Be LA’s Hottest Reservations

Whether you're feeling like steak and oysters or carrot lox, we have options for you

As the days get shorter and things finally cool off, there are more reasons than ever to explore LA’s ever-expanding foodie scene. As our recent brunch menu scope out revealed, plant-based dishes and menus continue to crop up everywhere, and will always have a place in this town. But a secret fusion pop-up and a Marina-side refresh showcase how much Los Angeles has to offer, both in terms of creativity and location. A rooftop stunner with views of the Hollywood sign and the new restaurant anchoring a historic hotel are also worth checking out this month.

Opening the next iteration of this plant-based restaurant, a long-standing favorite already at the Venice location and its trifecta of cafes in New York, in West Hollywood only makes sense. It opened in a gorgeous new space between SUR and Catch, and pastel colors and huge windows make this an inviting hang in a bustling neighborhood. Between the buttermilk-soaked, crisped-up tofu skin on the Yuba sandwich — doused in plenty of hot sauce and served on a brioche bun, of course — and the mushroom “calamari” you won’t even notice the lack of meat on the menu. Cocoa waffles, uova in purgatorio (“eggs in purgatory”) and fresh juices, smoothies and lots of coffee options round out the brunch menu, but there’s plenty of pasta and pizza available too if you’re in a savory mood, or come during the evening.

The Culver Hotel is something of an institution in Culver City, and a property that has only benefited from the recent revitalization of the area. Located just across the way from the Culver Steps, the hotel’s lobby floor and outdoor seating have long been touted as one of the best places to grab a drink in the whole city, especially when their golden hour menu with lower prices is in effect. Now, the hotel has opened a formal restaurant with European cafe vibes to serve across these already beloved spaces, and Lillie’s is soon going to be one of the area’s most coveted reservations. Go surf and turf by pairing their whole, chilled lobster with drawn butter and a plate of the steak frites served with a mountain of fries and bernaise sauce. The drinks are as strong and as ever, and everything from “Le Burger” to the steak tartare to the ratatouille brings the French influence home. 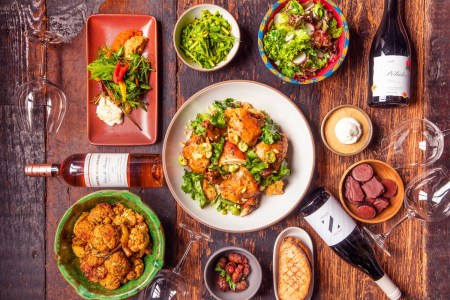 When yet another private members club debuted in August, it was clear The Aster wanted to stand out from the recently crowded space, with amenities like a recording studio, a salon, hotel rooms and a refreshing lack of “requirements” to join. Their restaurant, which is open to the public — even if you have to enter through the parking garage without a members’ key card to swipe in the front door — similarly looked to elevate beyond just another rooftop restaurant in Hollywood. First of all, this one comes with some mighty fine views, including a peek at the Hollywood sign itself, superb, attentive service, and inventive dishes from chef Marcel Vigneron that take classics and turn them on their head. A plate of crudités comes artfully arranged across hummus and pine nut gremolata, the hamachi “pizzette” is a clever serving of raw fish with thai chili and furikake, and best of all, Vigneron’s lemon pasta mixes Thai flavors like tom kha cream, turmeric and kaffir lemon into a delicious concoction that’s expertly balanced. And if that doesn’t appeal to you, the cavatelli with calabrese sausage is right there, too.

You only have a few days for this one, so get your bookings while they’re hot! PastaRAMEN is a new pop-up series from chef Robbie Felice and co. that, as expected, presents a take on Wafu pasta that brings Japanese-Italian flavors across 10 decadent omakase courses. After you sign up for a slot, expect to get a text the day before your dinner letting you know the secret location. Originally conceived as a pop-up project during the pandemic, the traveling dinner party has been so successful in New York, Miami and LA that it’s still going strong. Available in LA through mid-November, interested parties can sign up at our secret link here.

Another hotel getting its culinary game back on track after the pandemic, the Marina Del Rey Hotel has not one but two dining concepts to unveil. Originally opened back in 2015, their Marina-side restaurant was shuttered and completely renovated at the beginning of 2022. Now reopened with a new chef, Sean Collins, at the helm, SALT’s outdoor patio is expanded and open for breakfast, happy hour and dinner, while the indoor area near the bar and pool is now the Del Rey Lounge & Swim Club. Both spaces are open to the public, and this pair of waterfront options are perfect to keep in mind if you’re looking for somewhere to grab a bite near the marina — it literally doesn’t get closer than this. Shortrib with butternut squash puree was a highlight at SALT, but all manner of seafood is available too, from branzino and salmon to crab cake, lobster bisque and a jumbo shrimp cocktail that is truly jumbo.

Already a staple for Angelenos living in the Arts District or down in Orange County, Zinc Cafe is expanding to West Hollywood this month with a new location on Melrose. The cheery, mostly outdoor space is just down the street from Urth cafe, giving residents in the neighborhood another place to grab a healthy, delicious lunch or dinner. Another menu that’s effortlessly vegetarian, if you’re willing to go all the way in on the concept, go for the much-praised Zinc Reubenesque, a reuben made with beets(!). A potato arugula pizza is basically the perfect mix between pizza and salad, and the Middle Eastern breakfast with jammy eggs and herb salad is an all-day winner. With a hot bar, a whole breakfast menu and countless other salads and sandwiches, there is truly something here for everyone.