The Next Big Trend In Whisky Is … Blockchain?

Might be a foolproof way to authenticate your booze

What passes for innovation in the whiskey world tends to be along the lines of  “we aged this for an additional two years in old sherry casks.”

That’s what happens when your industry is built on tradition and tall tales.

So kudos to the experimental brand Fusion Whisky — a recent endeavor that blends Scotches with whiskies from other countries — which recently partnered with Scottish distillery Adelphi to relaunch The Winter Queen, a Scotch/Dutch whisky blend released with the help of the very now technology of blockchain.

As the Bitcoin site NewsBTC notes, using blockchain allows drinkers to track the spirit from “field to bottle” and trust that what they’re drinking is exactly as advertised. It’s basically a way to make the distilling process completely transparent and create an incorruptible ledger (a good and simple intro to blockchain and its merits can found here).

Basically, it’s proof that what’s in your glass is exactly as advertised … a big deal when people start paying three, four, five or even six figures for a bottle.

InsideHook: How does blockchain verify the origin of the spirit better than other methods?
Eric Piscini: High-end whiskies tend to be a fairly low-complexity and lucrative target for counterfeiting. This forces connoisseurs go to extreme lengths, such as detailed analysis of the cork and bottle — or even carbon dating — to prove the authenticity of whisky. While effective, these approaches are typically reactionary, resulting in time and capital-intensive processes.

Blockchain-based solutions enable distilleries and other businesses to take a proactive approach, authenticating the information associated with the production of whisky in real-time. This creates a shared ledger for tracking the provenance of a good and its components, which isn’t only convenient for authenticity, but also for compliance. In a highly-regulated industry, having this information verifiably correct and readily accessible can save time and money for distilleries.

IH: Is fraud a rampant issue in the whiskey business?
Angel Versetti: In most statistics wine and spirits are always researched together — so in the EU, counterfeit whiskey and wine costs countries 2.7 billion EUR per year. As well, [using blockchain] is more than just verifying authenticity. You can also track storage conditions, such as temperature, humidity, light exposure and other attributes that may affect the quality of spirits. 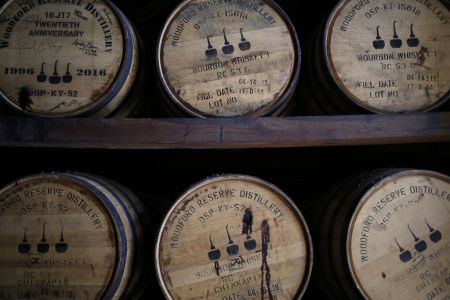