It's a hard job, but someone has to do it

It’s 10 a.m. My last coffee was more than an hour ago, and the room I’m standing in smells profoundly of cheese — 4,434 cheeses, to be exact, 45 of which are awaiting me and my two colleagues. It’s my very first time as a judge at the World Cheese Awards, a task that, while it marries my two greatest passions — cheese and being judgmental — is nevertheless gargantuan. I hope I am up to the challenge.

I have been living in France for more than 15 years, and I’ve been a food writer for nearly as long. While my work has taken me down various paths, cheese has always been a particular love of mine — ever since my first trip to France at the tender age of 10, when my father asked the man manning the cheese cart to give us “anything that smells of feet.” I love the variety of flavors in cheese, ranging from mushroomy to hazelnutty to, yes, sock-adjacent. I love the textures, from crumbly to yielding, oozy to solid to melt-on-the-tongue. But more than anything else, I love cheese people. They’re passionate and creative, deeply ensconced in tradition while also embracing innovation on the daily. (Many cheese people, it must be said, are also kind of weird, which is perfect for a little weirdo like me.) So judging the contest that, for all intents and purposes, is the Oscars of the cheese world was far more exciting to me than attending the actual Oscars.

This year, the 34th annual competition was held in Newport, Wales, a last-minute change after Kyiv understandably was unable to host as planned. I arrived the night before the big day and settled into my hotel, and after nearly ordering a Welsh cheese plate for dinner, I steadied myself and opted, instead, for a vegan quinoa salad.

The following morning, I was more than ready for cheese. Our day began with a briefing before we were welcomed with much fanfare (and a Welsh boys’ choir) into the room containing nearly 100 tables of cheese. Our task: to score our allocated cheeses based on a number of criteria, including aesthetic, aroma, texture, mouthfeel, and, of course, taste. With enough points, cheeses could be awarded a Bronze, Silver or Gold sticker. Then we would designate one selection as our Super Gold, to be assessed by a 16-member panel of cheese experts and vie for the chance to be named champion of the year.

At my table, we eased into our tasting with a pack of processed cheese slices of a downy white. We examined their texture and visual appeal before having our first taste, and while not unpleasant, they weren’t impressive enough to earn a Bronze.

From there, we divided our table into categories: the pressed Alpine cow’s cheeses; the massive, hole-y Emmenthalers; the hard sheep’s milk Manchegos, of which we were given nearly 10. This approach didn’t just allow us to move through our 45 in relative order of assertiveness, it also invited comparisons as we tasted similar cheeses back to back. “Is this Manchego as standout as that one?” “Do we like this Emmenthaler as much as we loved the first one we tried?”

Some cheeses proved unanimously phenomenal. A towering mound of grey-blue nearly earned our Super Gold nomination, a nod that ultimately went to a pressed Alpine cheese of a Gruyère-ish nuttiness. Others confounded and confused, like overassertive contenders that tasted far more of truffle or garlic than cheese, or one behemoth weeping a brownish, coffee-scented sludge. In what felt like no time at all, our three-hour judging period was up. As we cross-tasted to confirm our Super Gold choice, I felt a bit delirious (though that could, I realize, have simply been dehydration).

A few hours later, we gathered once more in the auditorium as MCs introduced our Super Jury panel, each of whom had championed one of the 96 Super Golds. The crowd went wild. They were, after all, the rockstars of the cheese world: Denis Priimagi, owner of Ukrainian retail chain Cheese Kingdom; Whole Foods cheese buyer Cathy Strange; La Fromagerie founder Patricia Michelson, who, that evening, would be granted an award for exceptional contributions to cheese.

Have We Been Missing Out on the Sexy Side of Cheese All This Time?

Exploring "the darker side" of dairy with Erika Kubick, the author of "Cheese Sex Death"

During the course of the next hour, each finalist cheese was presented with accolades from the juror who had selected it. Each was re-tasted live by all 16 members of the panel, who scored it out of seven points. Gorwydd Caerphilly, a historically Welsh cheese, was championed by the sole Welsh member of the panel, and she said it tasted just like the one she and her mother used to make growing up. It was a boon for the Somerset-based Trethowan’s Dairy, where cheesemonger Ben Ticehurst has either been selling or making the cheese for 20-odd years.

“I’d seen that we had made it through with a Super Gold,” Ticehurst told me, noting that following the initial judging, “it’s always the makers kind of just wandering around trying to have a surreptitious look to find their cheeses.”

Making it into the final 16 was rewarding, not just as the English producer of a traditionally Welsh cheese, but as someone making a style that Ticehurst said is “very often overlooked.” Caerphilly boasts a crumbly texture and mild flavor akin to Lancashire or Wensleydale, with a soft layer of breakdown just beneath the rind. “The best Gorwydd is almost like an ice cream, so it’s soft and fluffy and not at all granular,” he said. “It just doesn’t seem as approachable as, say, a Swiss mountain cheese — which is very sweet and nutty — goudas or American-style cheddars.”

This was, nevertheless, the third time Gorwydd made it into the top 16 with that particularly special nod from the Welsh judge. “Hearing it being described as the same style as her mother used to make, that means a lot,” Ticehurst said. “We try to keep things very traditional, but obviously we don’t know what things were like way back. So to hear someone who has been around for a lot longer and knows the cheese from a long time ago, that was really good validation of what we do.”

Gorwydd would not, however, take top billing. About midway through the judging, one Alpine cheese emerged as a major contender, as it received the first three-digit points total. While others came close, they did not surpass it, and as the last score was announced, a whoop could be heard from the back of the auditorium. Cameramen trained their lenses on Joe Salonia of Gourmino, the ager of the Gruyère AOP surchoix produced by Vorderfultigen. Salonia appeared on the big screen, huddled close to Gruyère marketing manager Denis Kaser and followed as he bounded onstage to accept the prize.

“You know a Gruyère when you see it, and a parent knows its baby too,” Salonia told me. “Even from a distance, now with iPhones, it’s like having a Hubble telescope in your hands, so I was zooming in and looking at every cheese with my phone.” Finding out the cheese had won first prize was “a moment — besides my kids being born, it’s the moment I’ll never forget,” he said. The Gruyère is currently only available at two U.S. shops: Darien Cheese & Fine Foods in Darien, Connecticut and The Cheese Shop of Des Moines in Iowa.

As for me? It took me two days to want to eat cheese again, but when I did, I broke my fast eating raclette — an Alpine melting cheese that’s best drizzled over potatoes — with fellow cheese nerds. It was delicious. 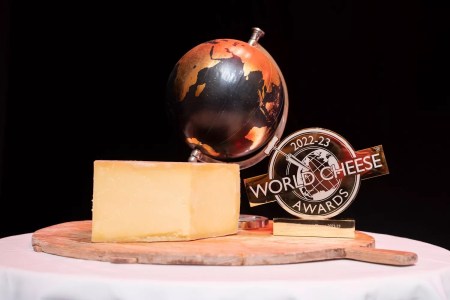 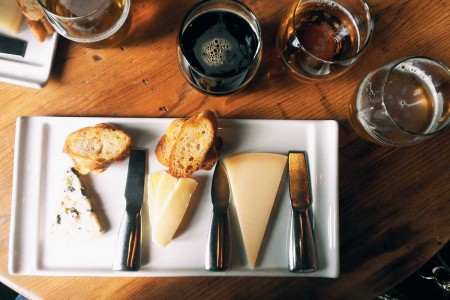 Have We Been Missing Out on the Sexy Side of Cheese?