The Grant Achatz Guide to Attempting Molecular Gastronomy at Home

This story is an exclusive sneak peek at Wondercade, the new newsletter from Neil Patrick Harris produced in partnership with InsideHook Studios. You can sign up — for free — to receive it right here.

My name is Grant Achatz. I’m the chef/co-owner of The Alinea Group, which has four restaurants and two cocktail bars in Chicago. Our flagship restaurant, Alinea, opened in 2005 and has led the “Molecular Gastronomy” (or what we call “Progressive American”) genre of cooking in the United States. For those not in Chicago, we also have five self-published food and cocktail books as well as my autobiography, Life On The Line.

What, exactly, is molecular gastronomy, you ask? Good question. The term refers to a style of cooking that emerged in the late ‘90s/early aughts that expanded the culinary toolbox to include machines and techniques more commonly used by food scientists in laboratories than by chefs in professional kitchens. The intent was to creatively push food and the dining experience forward and challenge conventions. I like to say that this style of cooking uses emotions as seasoning: intimidation, confusion, intrigue, happiness, magic and nostalgia are layered over delicious food by using newly developed techniques, ideas and equipment to manipulate the food in unexpected ways.

As for how I got into it? At an early age I recognized an insatiable curiosity, a relentless creative spirit, and almost a feeling of obligation to change the status quo. After culinary school, I knew I wanted to learn from the best, and I knew that would be learning from Thomas Keller at the French Laundry. I hand wrote him a letter every day until he said I could come try out in the kitchen. It was my time staging at el Bulli restaurant under Ferran Adrià in Spain that catapulted me into the realm of hyper-modern cooking. Like most everything, to do it well requires endless practice, study, risk-taking and failure. I gained most of my essential knowledge from reading books, trial and error and, of course, the internet.

A few examples that illustrate my style include the edible balloon — where we challenged ourselves to make food float (plus there’s just something about watching people of all ages suck the helium from a completely edible apple taffy balloon and sing like Mickey Mouse). There’s also the tabletop dessert, when we redefined what a “plate” could be — a chef appears from the kitchen and paints the dessert on the entire table surface in front of the guests. Finally, the pheasant with burning oak leaves, where the aroma of smoldering leaves transports you to a nostalgic time.

Now, this is not to say that only a professional chef with many years under his/her belt can pull this stuff off. Many of the dishes we do at Alinea are replicable at home by amateur cooks if you make some smart swap-outs to achieve the same effect. For example, anyone can create a beautiful fall-themed arrangement in a bowl and place it on the table. Your dinner guests will think it’s simply decoration until you use a torch to ignite the leaves and cinnamon to complete the thematic focus of, say, a pumpkin and apple dish. The overall principle is quite simple: Ask yourself what moves you. What smell do you recall from your youth? A song? A taste like your grandmother’s apple pie? Sitting in total amazement while watching a magic show? Let questions like these be your guide.

For the most part, you can put together a molecular gastronomy meal with what you already have in your home kitchen. Although, if you happen to have a vacuum sealer, immersion circulator, a vaporizer or access to liquid nitrogen … even better! Below you’ll find a recipe to get you started that requires only patience, practice and a good quality torch. Enjoy!

For the grapefruit glaze:

For the Cooking and Assembly: 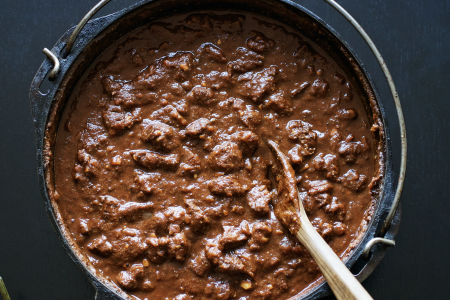