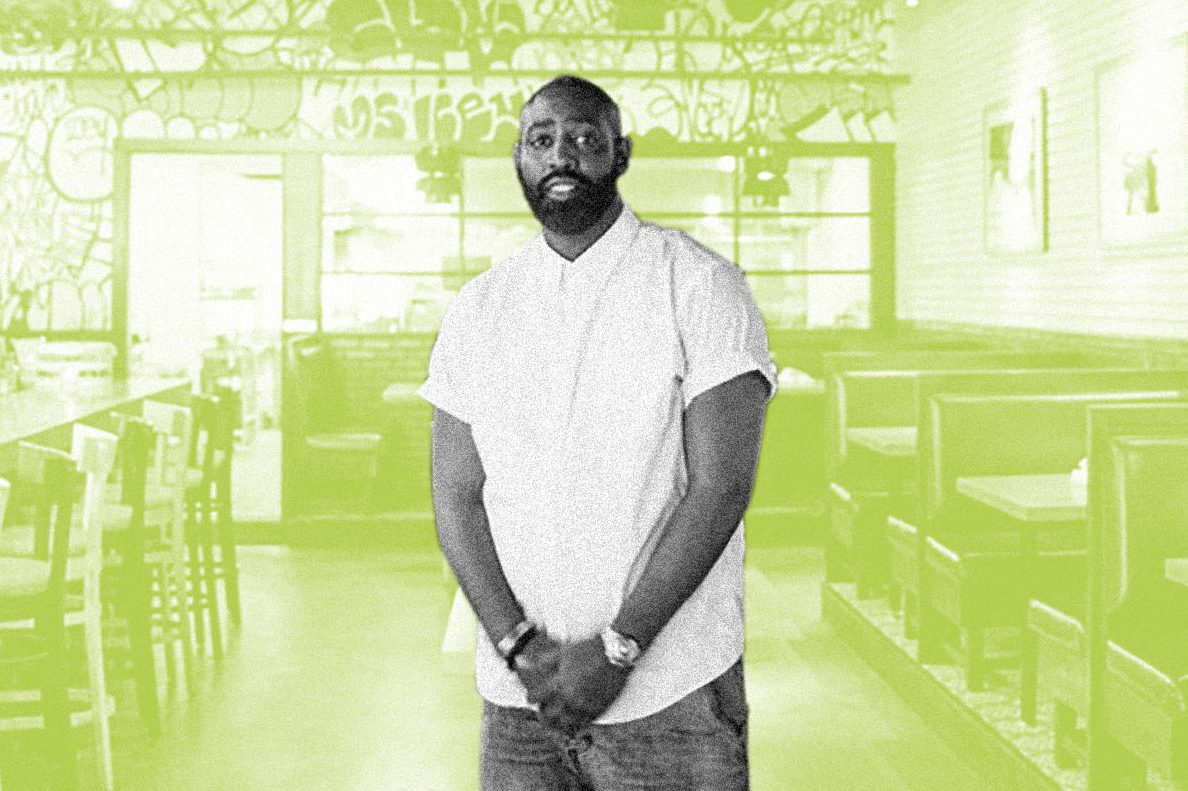 In honor of all of the restaurants we dearly miss and can’t wait to get back to, we’re asking some of the country’s most decorated chefs to tell us about the meals that will be at the top of their list when Stay at Home orders finally lift. This is First Meal Back.

Sim Walker grew up shadowing Marva Layne, the owner of New York City Jamaican restaurant Negril Village and — fortuitously for Walker — his mother. These days Walker is the owner of Ms. Icey’s Kitchen & Bar, a Caribbean-Southern hotspot in the Atlanta neighborhood of Decatur. Prior to the pandemic, he was on the verge of opening a second restaurant, APT 4B, in Buckhead.

But thanks to the COVID-19 outbreak and subsequent shutdown, Walker temporarily closed his restaurant and, when it reopened, was forced to shift his focus to doing pickup and delivery instead of serving up one of Atlanta’s hippest brunches to customers in person.

With Atlanta now basically back to business as usual, with some restrictions in place, there’s also another world-changing movement taking place in the city — ongoing protests supporting Black Lives Matter, following the murder of George Floyd. In the midst of all this change, Walker is trying to build back and regulate dining-in business at Ms. Icey’s.

As part of our series First Meal Back, we connected with Walker to hear what it’s been like to operate a Black-owned restaurant in the midst of the ongoing protests in the wake while simultaneously trying to financially survive a pandemic.

InsideHook: How did the switch to doing takeout and delivery impact Ms. Icey’s?

Sim Walker: That really didn’t hold us. We weren’t popular for that like a lot of other restaurants are. Our business dropped about 95 percent. We’re an experience-based restaurant. People traveled to us for an evening out and our brunches are super popular. So, the takeout angle, although we tried it, didn’t hold our business and it still isn’t. But we just started to resume our dine-in business and we’re starting to see a small uptick.

Do you intend to keep offering delivery and takeout moving forward?

My restaurant, we’re only a year-and-a-half old. The restaurant is a baby and it’s still growing. I think as a result of COVID, we’ve developed a full takeout business and I think we’ll continue to do that. We’re finding that if our business rebounds and resumes its regular capacity, we might find a five-percent increase. Then, we’ll be at an overall increase in business and maybe that’ll prove to be a positive for us moving forward.

Have you seen any effect on your business from the protests in Atlanta?

Atlanta is extremely spread out. Most of the protesting has taken place in downtown Atlanta and we’re not very close to there. So we haven’t had any issues as far as that goes. But, with the protesting and the movement that’s going on, we’re seeing a lot of people wanting to support Black-owned businesses. It’s starting to help our business rebound a little bit. There are lists traveling around on social media of Black-owned restaurants. Those lists are picking up a lot of traction and they’re getting the attention of mainstream media as well. I believe the other thing that’s happening is that there’s a contingency of white people who are catching wind of these lists and they too are intentionally supporting Black-owned businesses.

Does your restaurant not usually see that type of support?

I would have to say maybe 10 percent if not less of our customers were white pre-COVID. I don’t know how far you want to delve into that issue. I find that issue super interesting because my businesses aren’t in majority-Black neighborhoods. When you do the math, it doesn’t add up. I think racism doesn’t just occur in the form of police brutality — it occurs in all facets of life, sometimes in ways you’re not even thinking of. Racism might be strong, but from what I have seen, anywhere there is a huge population or contingency of Black people, doesn’t seem to get the same frequency of white people. For a restaurant like mine, if we had just as many white people frequenting us as we did Black people, our business would be through the roof.

So those Black-owned business lists have actually been doing some good?

Absolutely. I think what happens with lists like those is that if you weren’t aware, you become aware. There are businesses on those lists that I’m not familiar with or I may have not been to. They are reminders, you know what I mean? It’s also helpful because they get into the hands of people that may not even have been looking for these businesses. But now it gives them an easy guide. I talked to a white woman just the other day while she ordered food. She said, “Hey, myself and my neighbors, we got ahold of this list. We want to support you and we’re placing a large order for dinner tonight.” Then she proceeded to ask me questions about the menu. Stuff like that is awesome.

Is there one particular aspect of all of this that has been the most challenging for you to deal with?

That’s hard for me to say. I would answer that it’s just been definitely a mental and physical challenge. It’s been hard mentally not knowing if you’re going to be able to survive financially, and not knowing if you’re going to be able to make it through. Then there’s executing the physical job, which is a little bit harder when you don’t have the same labor force. It’s almost like we’re reopening our restaurant. And we’re rebuilding, Everybody’s not in the best spirits. Everybody’s not ready to come back to work. I’m worn out just trying to make it all work because our system isn’t just running at full capacity or the way it was. The combination of all those things just makes it challenging. I’ve just been hoping for the best and know this isn’t the end of life or the end of the world. We’re doing a good thing and the business will rebound.