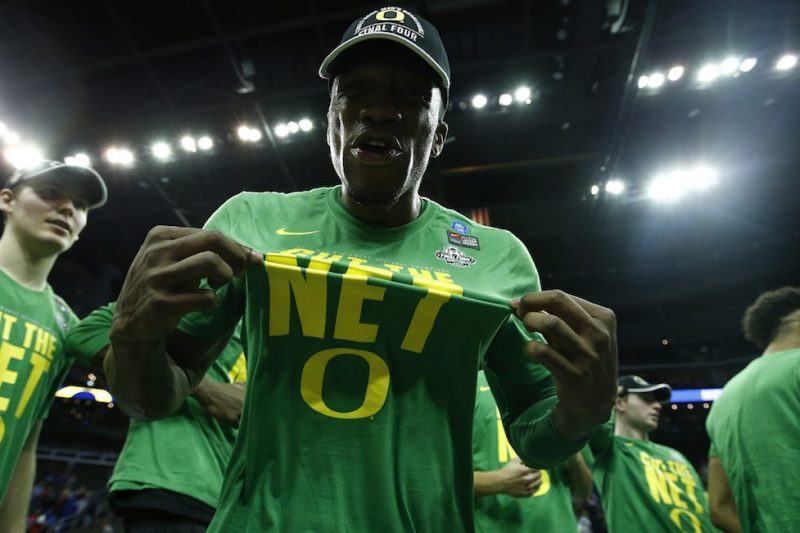 Dylan Ennis of the Oregon Ducks shows off his Nike shirt while celebrating reaching the Final Four during the 2017 NCAA Men’s Basketball Tournament on March 25, 2017 in Kansas City, Missouri. (Timothy Nwachukwu/NCAA Photos via Getty Images)

The Oregon Ducks are achieving feats that they haven’t managed since the first NCAA Men’s Tournament in 1939, but their real MVP may not be on the court.

The burgeoning college basketball power has gotten a little help from a friend named Nike.

The Oregon Ducks aren’t the only school to receive money from Nike, but the university does enjoys a unique bond. Nike co-founder Phil Knight is a graduate of Oregon, where he ran track. (He actually co-founded Nike with his track coach there, the late, legendary Bill Bowerman, whose running protégés included Steve Prefontaine.) Currently, Knight’s net worth is $26 billion and he seems determined to funnel as much of that to Oregon as possible. Knight and his wife, Penny, are generous to the entire University—witness $500 million to set up a science campus—but the sports teams hold a special place in his heart…and wallet.

Indeed, the basketball team plays in the Matthew Knight Arena, which is named for Knight’s late son. (It’s believed he contributed $100 million to its construction.) He’s also given $41.7 million to The John E. Jaqua Academic Center for Student Athletes (named for a late UO alumnus and founding Nike board member); $30 million to the renovation of the football stadium; and $68 million for a new football training facility. In total, Knight has given Duck athletics over $300 million.

His importance to the program can be seen in the photo below. 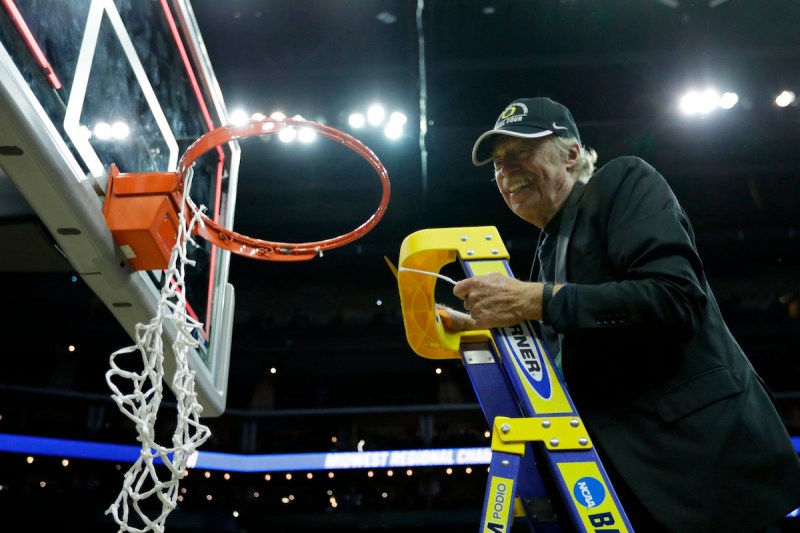 Oregon alumnus and co-founder and chairman emeritus of Nike, Inc. Phil Knight cuts down the net with the Oregon Ducks after their 74-60 win over the Kansas Jayhawks during the 2017 NCAA Men’s Basketball Tournament Midwest Regional. (Jamie Squire/Getty Images)
Getty Images

Yes, that’s right. If you watched Oregon Ducks celebrating their victory over Kansas, you would have seen jubilant players in their late teens and early 20s helping cut down the net. And you would have seen a 79-year-old billionaire joining in the traditional celebration.

But the Nike-Oregon relationship goes beyond Knight’s personal generosity. Nike itself has worked out a remarkable arrangement with the University of Oregon. In 2014, Nike announced that the Ducks football team “were the first to wear nearly every Nike Football uniform and cleat innovation over the past decade.” They also observed that the “Ducks have never worn the same uniform combination twice,” thanks to Nike’s relentless creation of UO gear, and that Ducks student-athletes had even helped them name the Nike Vapor Untouchable cleat.

There’s more. Nike has created player-exclusive sneakers for the football and basketball teams. (Which, for a 17-year-old prospect trying to figure out where to go to school, is a pretty cool perk.) Nike also awards five $2,000 scholarships to Duck student-athletes whose eligibility has expired, while the university gives two $5,000 scholarships for Nike employees. Nike even guarantees an internship at its headquarters for one UO student each year. That’s all a reminder of the literal closeness between Nike and the Ducks. (After all, Nike World Headquarters is located in Beaverton, Oregon, just to the north of the University.)

Of course, while Nike gives, it also takes as well. Nike products fill University of Oregon bookstores. Varsity coaches must make Nike appearances. The basketball teams may be required to play in a Nike-sponsored tournament. If the University of Oregon wants to change its logo, Nike even contractually gets the first shot at the redesign. (Which makes sense—Nike played a big role in the design of the current one.)

And the Ducks are just fine with this arrangement, having been known to proclaim themselves the “University of Nike.”

Oregon next faces perennial powerhouse North Carolina in the Final Four on Saturday. Should they win, it will be an upset, but one made far more likely thanks to Mr. Knight and a sneaker company he started back in 1964.

It Seems the Star Defectors of LIV Golf Series Are No Longer Good at Their Craft
Meet the Canadian Distillery Behind the World’s Best Rye
The Chevrolet Corvette C4 Is a Classic Sports Car Steal
The Ideal Bonita Springs Getaway Is More Than Alligators, Tacos and Piña Coladas
The Best Places to Order Steak Online
Defectors to LIV Golf Invitational Series Have Started Teeing Off on PGA Tour