How the Experts Win at Fantasy Football

Antonio Brown #84 of the Pittsburgh Steelers makes a touchdown catch in front of Greg Toler #28 of the Indianapolis Colts during at 2014 game at Heinz Field. (Joe Robbins/Getty Images)
By Will Levith 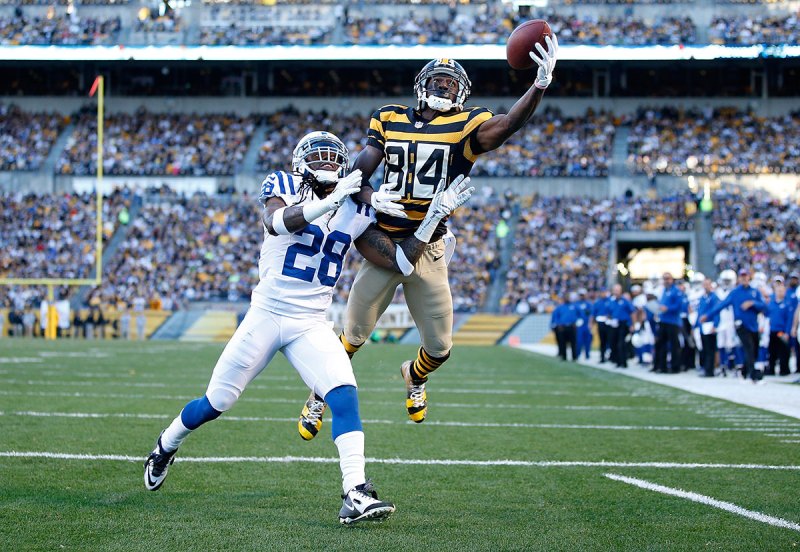 Antonio Brown #84 of the Pittsburgh Steelers makes a touchdown catch in front of Greg Toler #28 of the Indianapolis Colts during at 2014 game at Heinz Field. (Joe Robbins/Getty Images)

Every year, it’s the same old thing. You buy the fantasy preview magazine. You do the research. You get the ESPN alerts on your phone. You don the Manning jersey and fly to Vegas. When the time comes for you to make your first pick of the year at the big draft, you freeze. Anxiety sets in, as do the cold sweats. You second-guess yourself. Did I do enough? Do I really know what I’m doing?

Hopefully, this isn’t you, but the fantasy yips are something every football team owner has faced at one point or another throughout his or her career. Whether you take part in a snake draft or auction league or another derivation, nobody’s immune to draft day failure. That is, unless you listen to your friends at RealClearLife.

With the biggest weekend for fantasy drafts fast-approaching—Aug. 26-28—we’ve got you covered going into the big night and beyond. We’ve gone ahead and done the heavy lifting, tracking down some of the top experts in the fantasy football world and getting the inside scoop from them.

Our panel includes Rick Wolf, president of FantasyAlarm (he also hosts a popular fantasy sports–related show on Sirius XM radio); Will Carroll, managing editor of FanDuel; and Stacie Stern, general manager of Head2Head Sports. (RealClearLife staff writer Will Levith also threw in his decades worth of fantasy sports knowledge, which has led to at least one title, a runner-up, and a whole lot of losing.)

In a League of Your Own

Depending on what league you’ve signed up for, it’s always good to have the basics trained to memory. Surprisingly, there are four main types of fantasy football leagues you can join these days, and we have a bead on them all:

Snake Draft League: This is, by far, the easiest league to draft in, according to all our experts. It involves, say, 12 owners, who all draft in order. So once the first team’s owner takes the No. 1 pick, it goes down in order, sequentially, and then reverses course after the 12th pick, snaking backwards. And back and forth until the last pick is made. Got it?

Snake Draft with Third-Round Reversal League: This is a newer version of the snake draft, which is exponentially fairer, according to FantasyAlarm’s Rick Wolf. “After you get through the second round, you then reverse and start with the 12th team,” he explains. (As it were, it’s been all but proven that there’s a serious advantage for the top three pickers in a snake draft league. So if you get one of those picks in the above draft type, it should be smoother sailing than normal.)

Auction Draft League: This is for the big boys, with the payoff (and payout) being altogether more satisfying. But it’s decidedly more complicated than the snake draft leagues, as it involves actual dollar values for position players and requires budgeting in order to draft a competitive team. If it’s not managed correctly, it can get messy fast. Done right, it can be incredibly entertaining. FanDuel’s Carroll says that he prefers the format to snake-draft leagues “because everybody has an equal shot.” Wolf concurs: “The beauty of auction leagues is that you can have any player you want as long as you’re willing to pay for them.” But remember: You can only spend so much on the high-profile guys. So as Wolf explains, it’s all about the bargain-basement options—or the sleepers. Head2Head’s Stern drives it home: “You really have to prepare.” In short, if you happen to be in the financial services industry, it’ll probably come to your advantage in an auction league.

Daily Draft League: This type of fantasy drafting option has caught on like wild fire in the past few years. It’s become a popular way for team owners to get more of a “quick fix,” as opposed to playing an entire season to cash in on a victory. Companies like DraftKings, FanDuel, and even Yahoo Sports and ESPN have launched daily or weekend contests that allow owners to pick full teams using any players, with the potential for cash prizes. Obviously, this all depends on how much research you do and skilled you are at the game. But the payouts can be huge. Think of it like the horse racing of fantasy leagues.

Strategy for Draft Day and Beyond

Having an airtight draft strategy is key to avoiding that anxious moment we mentioned in the introduction. If you have a good one, you should go into the big day feeling comfortable and ready to take on the fantasy world. Our experts weigh in:

Pick Yourself a Winner

We asked our panel to give us their top three picks for 2016-17, as well as their top sleeper pick. Incidentally, they were unanimous on the No. 1.

Still not satisfied? Check out the results of an expert fantasy football draft completed back in June here. To read a feature on the founder of fantasy football, click here. Good luck!