Eight new restaurants for all you dilettantes and bon vivants

To keep tabs on every New York bar and restaurant opening is folly. But to keep tabs on the most worthy? Yeoman’s work, and we’re proud to do it. Thus we present Table Stakes, a monthly rundown of the five (or so) must-know spots that have swung wide their doors in the past thirty (or so). Let’s get it.

Loring Place
Greenwich Village
You’re here because you could hardly contain yourself waiting for this opening … or at least we couldn’t. Dan Kluger, formerly Executive Chef at the James Beard-awarded ABC Kitchen, now helms his own seasonal American dining locale, named for his Bronx-born father.
You’re dining on a market-driven bounty, but with the elevated and unexpected flavor combinations for which people have come to revere Chef Dan. Start with the seasonal pizza, ease into the ricotta agnolotti or lamb, and someone at the table best snag the cornerstone Loring Place Cheeseburger.

Tim Ho Wan
East Village
You’re here for the low prices and the Michelin star. Hong Kong’s renowned dim sum house has landed. There are no reservations, service is morning to night, and orders are taken on sheets at the table.
You’re dining on two New York-exclusive items: a deep-fried vegetable spring roll and custard-filled French toast dessert. In between, you’ll be showered with pan-fried turnip cake, baked bun with BBQ pork and steamed rice rolls.

4 Charles Prime Rib
West Village
You’re here because no one can resist Chicago’s Au Cheval burger, now served in an underground lair in our backyard.
You’re dining on the burger … I thought we covered this. But should you need to veer from the path, the prime rib plays best man, followed by a little something called a “sundae royale.”

Royal 35 Steakhouse
Midtown East
You’re here because if you want a steak done right, veterans from Strip House NYC, Jean Georges, Ben & Jack’s Steakhouse & Il Monello are a safe bet. Old school-hospitality helps. So too Sherif behind the bar, who’s been doing this for 51 years. He makes one helluva martini.
You’re dining on the Porterhouse for two. No question about it. Their cuts are dry-aged for 35 days in their own aging box with Himalayan Sea Salt blocks. Do exactly as follows: oysters, wedge salad, porterhouse, mac’n’cheese, creamed spinach, steak. You’re welcome.

Denizen
Williamsburg, Brooklyn
You’re here because you’re on a date and there’s nothing quite like a provencal wine and cheese bar to do the trick.
You’re dining on small plates like kale Caesar with shiitakes, squash with sage and French onion toast with a slew of international cheeses accompanied by a mighty wine collection.

Sugarfish
Flatiron
You’re here for the hype, but it’s worth it. LA’s formidable sushi-lover locale has set up shop Eastside and the world has accordingly gone gangbusters. Likely because the cuts are hand-selected and truly superior in quality.
You’re dining on three “Trust Me” menus inspired by Japanese omakase. Each one comprises sashimi, nigiri sushi and hand rolls along side a la carte selects. Trust us: trust them.

Boucherie
West Village
You’re here to celebrate French joie de vivre with the intrepid team known for Akashi, Bistro and Olio e Piú. You’re here because we’re all suckers for a bistro experience, especially when it comes complete with a Butcher’s Table.
You’re dining on exactly this: the Boucherie burger with dry-aged Pat LaFrieda blend and topped with caramelized onions and aged gruyere, the Côtes de Chevreuil (an herb-crusted rack of venison), and the Côte de Bœuf Pour Deux: a 36-oz. dry-aged tomahawk rib-eye for two served with bone marrow. Should you possibly have room for more let it be the Escargots Gratiné and, obviously, some wine.

The Anthony
Greenwich Village
You’re here because the city loves a lounge and Chef Max Renny is here to deliver. It’s a 60-seat, bi-level resto, one part eatery and one part nightlife venue.
You’re dining on duck and waffles, banh mi buns, a tomahawk chop for two and a round or two of martinis. 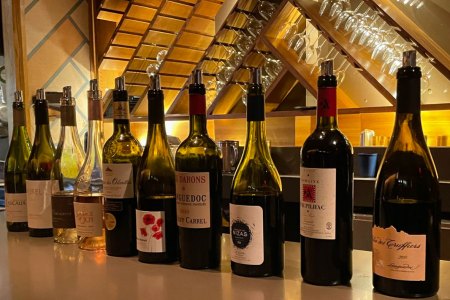