Where to find LA’s most iconic holiday dish

If you haven’t tried Chef Ray Garcia’s lamb neck tamale at Broken Spanish — rich, soft and ultimately singular in the pantheon of L.A. tamales — you need to add it to your to-do list, stat.

Tamales date back to the Aztecs, and have stood the test of time because they’re so damn delicious. They’re also labor-intensive, which is how they became a Hispanic holiday staple: historically, families made them in batches for special occasions.

So for this edition of Meal Plan, we asked Chef Garcia about his homestyle tamales, along with the best of the rest you’ll find in L.A. this holiday season.

Why are tamales a part of the holiday tradition?

“For me they are something that have just always been part of what is on the table come Christmas time. They are a simple, warm, soul-satisfying dish that is affordable and generally easy to prepare or come by. This year, we’ll serve tamales with pork and green mole. It’s a very traditional preparation, although at this point, I don’t even really use a recipe anymore. We keep it pure, there’s no need to improve on a great thing for the sake of tweaking.”

What else is on the menu?

“The menu can vary; we like to experiment a little. There are, however, a few mainstays that make it into most holiday dinners: tamales, ham, a great cut of beef and gnocchi or a stuffed pasta of some kind. My wife’s family is Argentinian, so it’s traditional for her to have beef and gnocchi for celebrations like this. It’s important to us that our dinners represent both families’ heritages.”

Where do you shop for food?

“Our dishes vary from year to year, and we honestly don’t seek out any one vendor for most of the ingredients, but the Santa Monica Farmer’s Market is a stop. The only musts are that we get the pastas from Guidi Marcello in Santa Monica, and our cuts of meat from a great butcher — we don’t skimp on that. The masa for the tamales is the same heirloom corn variety that we use at BS Taqueria and Broken Spanish from Masienda. The cuts of beef and other meats come from any great butcher in the area and sometimes from the farmer’s market. It really depends on what looks good.”

Where to go if you’re not making them at home: Sandra’s or Lolitas in East L.A.

“This was my family’s go-to place even before I was born. Sandra’s has been around since the ‘50s, and we’d go there regularly throughout my childhood. Nowadays, I prefer to make my own, but every once in awhile, I’ll have a nostalgia craving and stop by.”

“We do have a later dinner. But the best part happens after the midnight gift exchange. We‘ll put out a bunch of snacks and have a late-night, post-gift grazing. This consists of meats, cheeses, finger foods and more.”

As for the hooch…

“Wine, a lot of wine. Christmas Eve is a long haul and it’s a challenge to make it through drinking liquor or cocktails all evening. The one staple drink we never fail to make is champurrado, a Mexican hot chocolate thickened with masa harina. It’s warming, comforting and can double as dessert. If you’ve never tried it, it’s pretty spectacular and easy to make for a big group.”

Note bene: Broken Spanish is making their tamales to go this year, and you can place an order before the 24th here. 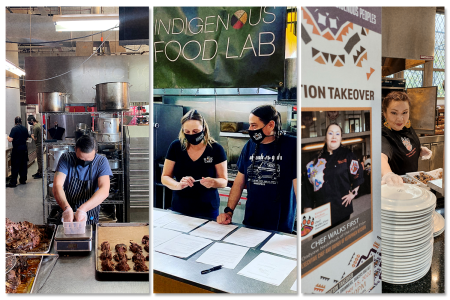