Tom Voigt of ZodiacKiller.com runs the most comprehensive site searching for the slayer.

In 2007 David Fincher directed perhaps one his finest thrillers, Zodiac. Based on Robert Graysmith’s books about the mysterious serial killer, the movie is a masterpiece of tension and mood, featuring fine-tuned performances by Jake Gyllenhaal, Mark Ruffalo, and Robert Downey, Jr.

Zodiac is one of those movies I’ll watch every time it’s on. The major events track, the murders play out in stark, cold detail—not gruesome and yet somehow more chilling due to that. I’m also always aware when I watch that many who see it might think the Zodiac Killer was a fiction. Or that his spree was essentially solved by Graysmith, whose books formed the basis of the movie.

All wrong. The Zodiac was real and he was a cold-blooded psychopath. He killed five—that we know of— and injured two. He focused his rage more on female victims, as the survivors were men. He sent threatening letters and mostly impenetrable codes to newspapers (only one code was ever conclusively solved), spawning public paranoia and fear. He was a lot of serial killer and a little bit domestic terrorist. Law enforcement officers hate to admit it when a killer is smart, but most would agree the Zodiac was very smart. 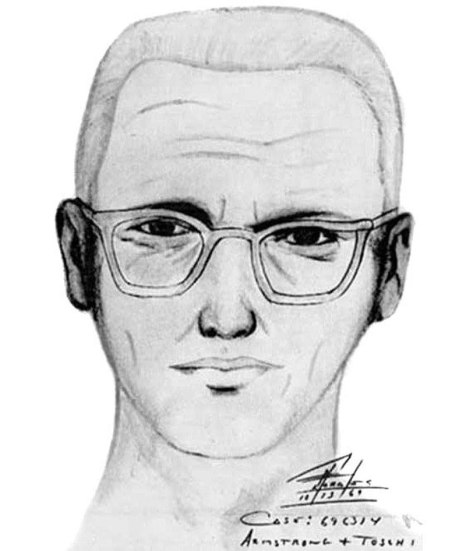 And for what it’s worth, he probably wasn’t the dad, stepdad, or Uncle Bubba of any one of a number of people who have even gotten book deals out of claiming he was.

Tom Voigt is the webmaster of ZodiacKiller.com, the most comprehensive repository of Zodiac documents and photos on the internet. There are other sites devoted to finding Z (as long-time sleuths often refer to him), and some are well-done, filled with plenty of no-nonsense discussion of the case.

Voigt, however, was the first on the case. His site turns 20 in March 2018, which is eons in internet time. So, as you might imagine, in many ways Voigt may have by far the best understanding of the mystery and perhaps even the man behind it.

I’ve been acquainted with him for years and have been a member of his active Zodiac forums since at least 2005. I can’t think of any other message board membership I’ve maintained for that long.

I reached out to Voigt over email with some questions about the case.

I first asked him about The Hunt for the Zodiac Killer, a recent History series investigating the case. He directed me to a frank forum post he published in mid-December. Voigt pointed out that “commercial television is not your friend, it is not an educational tool, it is not a public service; it is simply a money-making endeavor, not unlike a used car lot.”

He outlined several issues with the series, chiefly its total lack of substance. It recapped a number of theories, set up a ridiculous “team” devoted to solving previously unsolved ciphers, generally did nothing other than present an MTV version of a pointless re-investigation. Including a “new” suspect—Ross Sullivan—whose name had been online as a semi-plausible Zodiac candidate for years. 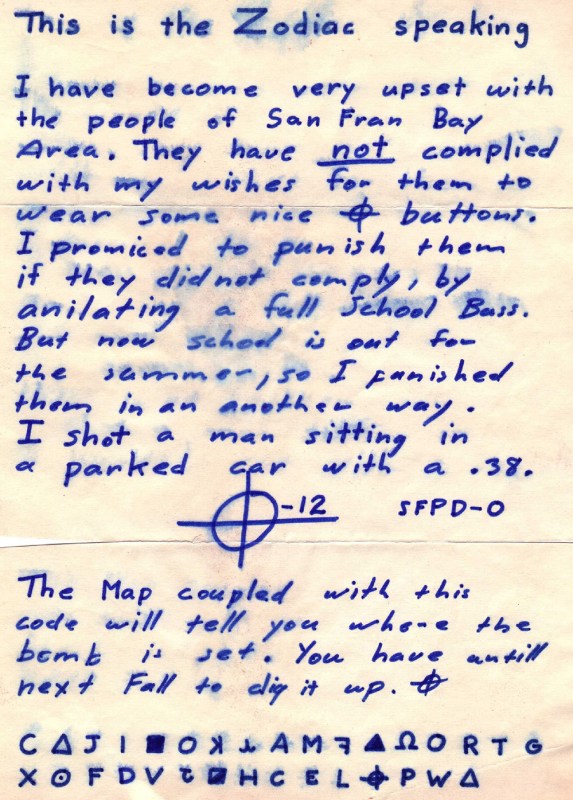 One of the Zodiac’s ciphers. (Wikipedia)

“After five episodes and five hours,” Voigt concluded in his post, “we are left with a nothing burger and no fries.”

I asked Voigt about his recent revelation from an inside source he has in the San Francisco PD that DNA collected for an episode of ABC’s 20/20 in 2002 is useless. As he wrote in his January forum post, “No genetic material was obtained” from the stamps or envelope seals of Zodiac’s letters. Therefore no one actually can draw a decisive conclusion they had traces of the killer’s DNA at all.

What that means, said Voigt in his email, is all previous Zodiac “suspects are back on the table.” (Emphasis mine.)

“It turns out the DNA obtained from a Zodiac correspondence back in 2002 was taken from the outside of a stamp,” Voigt wrote, “meaning it might well belong to the mailman and not the Zodiac killer.”

I noted the vast amount of info Voigt has gathered on his website in nearly 20 years, and asked him if he thinks the answer to the killer’s true identity could be found in files on the crimes.

Voigt noted—as he’d written on the Zodiac forum—that last September he’d been permitted access to evidence kept at the Vallejo Police Dept. “I think the answer to Zodiac’s identity is in one of those boxes (…)” Voigt wrote, “I saw a few old letters from the public offering help that might have been from the Zodiac, and they weren’t recognized by police as being suspicious.” 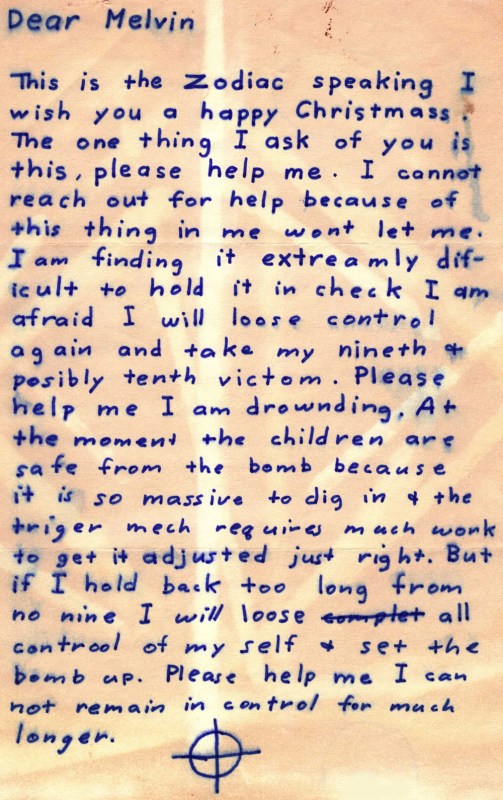 A letter found in files, supposedly from the Zodiac. (ZodiacKiller.com)

He elaborated in his forum post: “Some of what I saw in those boxes was hilarious (…), some was purely kooky, and some was outright spooky. There definitely could have been something from the Zodiac himself in those boxes; it’s my belief he wrote to the police under a different moniker offering ‘help’ and I saw several possible examples in those boxes that I’d like to explore further soon.”

Voigt included videos with his post. In two he handled some original Zodiac ciphers:

In another he detailed one of the suspicious pieces of correspondence he mentioned above:

I asked Voigt why he thought this case has attracted so many people who are certain they have some family connection to the Zodiac Killer. People like Steve Hodel—who also believes his father murdered the Black Dahlia—or the woman who claimed Zodiac was her stepdad. (She also claimed she was JFK’s love child.)

“Most of those people need to be in a mental hospital,” Voigt replied, “I know because I’ve had to deal with them. The worst is a woman who thinks the Zodiac was her Uncle Bubba. Fortunately, she hasn’t received a book deal. Yet.”

I wrote that the Zodiac has become—like the Black Dahlia, or D.B. cooper—a case so legendary people today treat it as if it’s a work of fiction. As a result, every new book or claim is treated by credulous journalists as worth taking seriously. I asked Voigt if he thinks—as I do—that this damages the serious search for an answer.

“If proof of Zodiac’s identity is found,” Voigt wrote, “But it will take real proof, not Uncle Bubba stuff.”

Finally, I had to ask one of the key questions regarding Zodiac, one I’ve puzzled over for years. “Do you think the Zodiac Killer is still alive? Maybe just as important, do you believe someone out there truly knows who he is?”

Having followed forum discussions for as long as I have, I knew what Voigt’s answer would be. “I do not believe he is still alive,” Voigt wrote, “as my best candidate to be the Zodiac is a deceased man named Richard Gaikowski. And I do believe there are individuals who know of his guilt.”

Gaikowski—who often went by Gyke—has been a lesser known suspect in the case, but an entirely plausible one. In addition to simply fitting the description and living in close proximity to one of the murders, so many Zodiac-related coincidences surround the man and his life that he’s impossible to dismiss. One paragraph from ZodiacKiller.com’s profile page on “Gyke” is enough to make you take notice:

“Eventual Zodiac victim Darlene Ferrin of Vallejo, Calif. got married on Jan. 1, 1966 and moved to Albany, NY. Gaikowski quickly followed, moving across country from Martinez, Calif. (near Vallejo). Ferrin’s husband worked at the Albany Times-Union newspaper; Gaikowski worked in the same building at the rival Albany Knickerbocker News. In August 1973, four years after Ferrin was killed by the Zodiac, the Times-Union received a letter from someone claiming to be the Zodiac. When solved, the cipher that was included with the letter made reference to the Albany Medical Center.”

Police looked into Gaikowski as a person of interest years ago and analyzed his handwriting, comparing it with Zodiac’s, and found no reason to further investigate. He died of cancer in 2004.

But he’s only one of several compelling suspects discovered by Voigt and the Zodiacologists frequenting his forums over the years. As recently as late 2017 they developed a portrait of a possible suspect whom Voigt code-named “Waterson.”

“Waterson” had ties to multiple locations related to the case, a strong resemblance to the most well-known suspect sketch, a history of violence, and at one point considerable mobility, as he was a commercial pilot. Serial killers thrive on mobility.

Whoever he is, whoever he was, the Zodiac Killer could be long gone by now. Perhaps he died soon after the final letter attributed to him. Perhaps he was imprisoned for another crime. Maybe he lived out his life restraining his murderous impulses after the 1970s.

That’s not unprecedented. The BTK strangler, a.k.a. Dennis Rader, had much in common with the Zodiac and his last confirmed murder was in 1991. He wasn’t arrested till 2005.

For now, the Zodiac is a ghost. No one in recent years who has claimed the killer was a relative has offered a shred of truly conclusive evidence to back up their claim. But if any group does have a decent chance of finding the ultimate answer to this bloody question, it’s Tom Voigt and the tireless searchers posting in the forums attached to ZodiacKiller.com.