‘The Madness of Two’: Killer Couples and the ‘Pizza Bomber’

As the true crime doc 'Evil Genius' shows, sometimes people bring out the worst in each other.

Evil Genius is the latest Netflix documentary to draw viewers into a dark world of relationships, schemes and crimes. The four-episode series focuses on the collar bomb case, pizza delivering patsy Brian Wells and the circumstances that led to his death on August 26, 2003.

Carrying a cane that doubled as a functioning shotgun and wearing a bomb locked around his neck, Wells robbed an Erie, PA bank that day before he was arrested. He was subsequently killed when the bomb exploded.

The crime was strange enough. Over time, state and federal investigators unraveled a complex and deeply weird cat’s cradle of conspiracies and schemes behind the events that led to Wells’s death. At the center of the intrigue were long-time friends and occasional romantic partners, Marjorie Diehl-Armstrong and William (Bill) Rothstein.

Armstrong was a bipolar sociopath who may well have been a serial killer, with dead boyfriends and a dead husband in her wake. Rothstein was an inventive and outwardly amiable eccentric, wearing bib overalls even in high summer and chatting in a friendly way with police as they attempted to determine his role in the crime—but he’d been complicit in at least one violent crime in the past, and at one point told officers he was the smartest man in the room, hinting at a well-hidden malignant narcissism.

As Evil Genius unfolds, it becomes clear that the relationship between Rothstein and Armstrong was unusual, to say the least. They were a pair of poisonous spiders sharing a web, like minds, Armstrong likely the mastermind behind the plan that led to Brian Wells’s death, Rothstein a fully complicit partner handling the practical planning, design, and physical elements. They shared a kind of madness. They may have formed a folie à deux.

Folie à deux literally means “madness of two.” One dictionary defines it as “a condition in which two closely associated people who are mentally ill share the same delusional beliefs.”

This can take the form of something innocuous as that couple everyone knew in college that could never keep their hands off each other. But the history of crime is full of couples locked inside a shared delusion—something far more dangerous than clingy 20-somethings.

Famous examples include Bonnie and Clyde, the Hillside Stranglers, and In Cold Blood killers Perry Smith and Dick Hickock. Over time these teams continually reinforced each other’s worst traits, their strangest ideas, violent impulses. One partner was usually dominant, the other passive—but too often, the passive partner became a full participant. Read on to learn about a few more examples of pairings far deadlier than Armstrong and Rothstein. Some will be familiar; others not. All are terrifying.

Lake and Ng didn’t have a romantic connection. They were a rare instance of psychopaths who bonded over their mutual sadism. The crimes committed by this serial-killing team are straight out of a horror movie.

The men began kidnapping victims in 1984. They frequently killed male victims outright—including at least one infant—and kept women prisoners in a torture chamber they’d built for that purpose. Lake and Ng would sometimes videotape raping and killing the women, who were treated as slaves while alive in captivity. As far as authorities know they killed eleven, though the toll may have been much higher.

Lake committed suicide shortly after his capture; Ng managed to stall his trial for years but was eventually sentenced to death in 1999.

Long before Match, Tinder, or CrossFit classes, single people sometimes sought companionship through “lonely hearts” ads in the newspaper. Martha Beck was a 27-year-old single mother living in Florida when she placed such an ad in 1947. She already lived in a fantasy world, and when suave Raymond Fernandez answered the ad, she felt like she’d struck gold.

After a brief time together, Fernandez left and Beck followed him, leaving her children behind. Beck completely gave herself over to him. At some point Fernandez confessed to her he was a con man and they teamed to launch their own deadly scheme. Fernandez continued meeting women and Beck posed as his sister. The pair murdered at least three, including a two-year-old girl Beck drowned for crying too much. The pair were sentenced to death and executed on March 8, 1951.

Over the course of four months in 1980, Doug Clark and Carol Bundy preyed on victims in and around LA’s Sunset Strip. They targeted especially vulnerable women like sex workers.

Clark would pick up victims using the premise that Bundy wanted to have sex with them. He essentially executed each one then had sex with the corpses. The couple tended to target young teen girls.

Carol Bundy was as sadistic as Clark, at one point even putting makeup on a severed head she found in a refrigerator.

Bundy bragged to her ex about what they were doing and he immediately said they should go to the police. She lured him into a trap with the promise of sex before shooting him then cutting off his head.

Strangely, Bundy had a fit of something like conscience not long afterward and told others what she’d done. Upon arrest, she gave police a complete confession.

Doug Clark was later convicted and sentenced to death while Bundy plea-bargained her way into a life sentence. 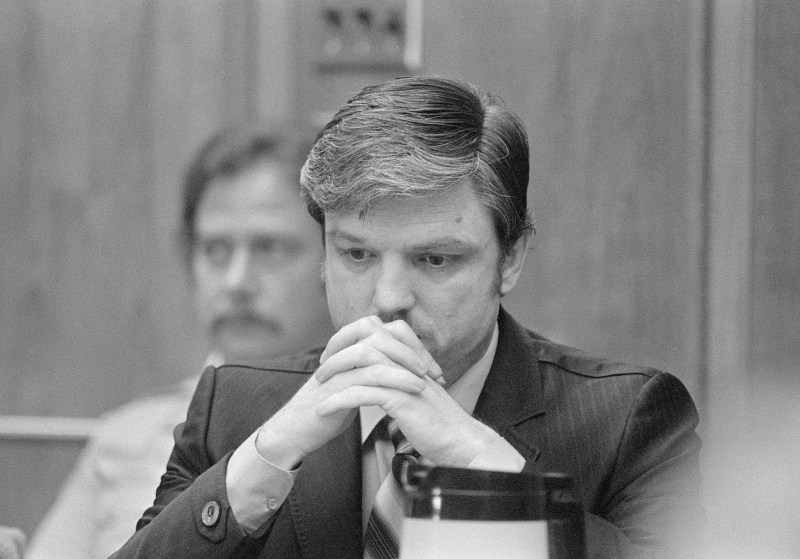 Convicted killer Gerald Gallego listens to his death sentence in Contra Costa County Superior Court. He was sentenced to die in the gas chamber for the murder of a college couple in 1980. (Getty)
Bettmann Archive

The crimes of the Gallegos resemble the acts committed by the Sunset Strip Killers, though motivations were different.

The pair met in 1978. Charlene Williams was a bisexual drug addict and Gallego had been married six times. Williams’s sexuality wouldn’t normally be relevant, but it allegedly played a role in triggering their spree; Gallego became enraged after catching her in the act with another woman.

Where responsibility for the Gallegos’ murders began wasn’t clear. Some reports say Charlene triggered the hunt for victims to appease her husband’s anger at her same-sex affairs—her way of ensuring he had sex slaves. Whatever the case, the pair abducted and killed ten victims before they were arrested in 1980, often abducting them in pairs from shopping centers

The couple was arrested after an eyewitness saw their license plate at an abduction site, and just as Carol Bundy did with Doug Clark, Charlene Gallego turned on Gerald and testified against him.

Reports vary about Charlene’s involvement in the crimes. Questionable sources even say she told a cellmate how much the murders excited her.

Whatever the truth, she was released from prison in 1997. As of five years ago, she was living in the Sacramento area under a different name. She has always completely denied any willing complicity in the crimes, telling a TV station in 2013 that she was “proud” of putting Gerald Gallego on death row.

Gwendolyn Graham and Catherine May Wood

Wood and Graham met at a Grand Rapids, Michigan nursing home. After they began dating, the pair decided they needed to add some excitement to their sex life. The solution was to kill the woman they cared for at the home.

The couple began killing in 1987. First, they smothered an Alzheimer’s patient before having sex next to the corpse. Wood and Graham didn’t stop there, too consumed with the horrible thrill. They killed four more times, then Gwendolyn Graham went off the reservation: She found murder too much fun to stop.

That was a step too far for Catherine Wood. They broke up, and eventually whatever vestigial conscience she had weighed too heavily on Wood and she confessed.

Graham—who claimed the whole thing was made up—went to prison for life, Wood for 20 years.

On the Frontlines of the Battle for Better Working Conditions in Minor League Baseball
Why Do All Books Suddenly Look the Same?
What Are Emotional Aphrodisiacs, And How Can They Help Your Sex Life?
Orson Fortune and the Joy of Ludicrous Movie Character Names
Shake Shack's New Bourbon Bacon Jam Belongs in Your Refrigerator
Inside New York's Mission to Add One Billion Oysters to Its Harbor by 2035
Filson's Denim Barrel Duffle Is a Limited-Edition Masterclass in Craftsmanship
Review: Hyperlite's UL Southwest Pack Is Still a Backpacking Standout
The Best Furniture and Mattress Memorial Day Sales to Shop From Wayfair, Casper, West Elm and More