What’s the Deal With Extra Añejo Tequila, And Is It Actually Worth It?

Aging tequila is a delicate art. These 7 bottles strike the right balance of oak and agave.

Extra-aged tequilas want to thought of like Cognacs and whiskies, but there are concerns
SipTequila
By Kirk Miller

Extra añejo tequila must be aged a minimum of three years in oak barrels. That’s nothing for whiskey — but it’s too long for a lot of tequila fans.

For an aged product, extra añejo (XA) is a relatively new category, only established in 2006 as a fourth tequila aging category (after blanco, reposado and añejo). But it’s gaining popularity quickly: while tequila itself has seen a nice average growth of about 6% in volume per year since 2002, the super premium categories have grown as much as eight times faster, according to the Distilled Spirits Council.

While still a small market share overall, the relatively high prices of these extra-aged agave spirits, combined with increased consumer interest, means we can now discuss XA tequilas like we do Scotch or Cognac. And pretty much every tequila brand is on board with an extra añejo, from Patrón to Jose Cuervo to dozens of craft distillers. And why not? They’re selling a high-end spirit at a higher price for something that you only need to age for a couple more years (standard añejos spend anywhere from one-to-three years in the barrel).

That said, spirits fans are split on the category’s actual merit.

“For tequila aficionados, the extra añejo needs to have something unique about it and/or a damn good story,” says Amanda Swanson, the bar manager at New York’s Fine & Rare, which deals with a range of hard-to-find and premium spirits.

One thing she likes about extra añejos is the barreling process, which may see these extra-aged spirits spend time in Cognac casks (see: expressions from Riazul and El Tesoro), Scotch and Port casks, or even wine barrels (see: Código, Excellia).

But mind you, whatever barrel process is going on, that wood is going to play a very strong role in the spirit. “Done correctly, you’ll experience similar vanilla, caramel, toffee and chocolate notes in extra añejos that you’d find in any aged spirit, but also with a certain creaminess,” says Swanson. “You’ll also find a minerality and a herbaceousness that can range from black pepper and white pepper to baking spices to even mint and eucalyptus.”

But agave spirits are delicate. And having them spend even a few years in oak in Mexico’s climate can see a very strong (maybe too strong) wood influence on the XA products.

“Agave distillates are delicious right off the still,” argues Michael Rubel, general manager of Chicago’s Estereo, an agave-forward cocktail joint. “And certainly time spent in a neutral vessel like clay will deepen and enhance those flavors, but the beauty of the moment of distillation will be subdued and asphyxiated by time in wood.” He adds that extra añejo makers are “charging ridiculous amounts of money for spirits with not only copious amounts of water added, but years spent having their identity and character scrubbed clean in a pretentious and pointless bath of wood.”

The key, then, is to find distillers who know what they’re doing when they’re allowing tequila to have some extra time in that wood. “When we age tequila, the goal is to complement and soften the tequila with the natural flavors of the barrel,” says Carolyn Kissick, the Head of Customer Education and Events for the online premium tequila store SipTequila. “For the most part, barrels used for aging tequila are given a toast, but hardly ever the deep char that a lot of whiskey barrels do. If the barrels are heavily charred, it’s easy to lose the natural sweetness and agave flavors of tequila to the wood and smoke. A lighter toast brings out vanillins and other complementary compounds in the oak.”

Below, a few tequilas Swanson, Kissick and we at InsideHook agree hit the right notes between wood aging and agave:

“The original batch was distilled in 1996 and aged for four years, then aged in glass vessels until it was distributed in 2013. It’s bold without being cloyingly sweet.” — AS

“Legally an añejo because only 40% of the bottle qualifies as an extra añejo. It’s aged in American Oak then blended together and finished in French Cabernet Franc barrels. It’s beautiful and hits all the parts of the tongue, all for under $100.” — AS

“Casa San Matias is owned and operated by Carmen Villarreal Treviño, one of the first female owner/operators in Tequila. Rey Sol spends six years resting in French oak with a medium toast, so it’s light on the oak and has a beautiful nuttiness and caramel flavors on the finish. The crystal decanter and case are designed by Sergio Bustamante, a very famous and revered Mexican artist and sculptor.” — CK

“Most extra añejo distillers move to bottling the moment they hit three years, but Carlos Camarena, the master distiller at Jalisco-based tequila label El Tesoro, doesn’t like to do things the way everyone else does. His latest expression blends four- and five-year tequilas that are aged in old bourbon barrels to yield a delicate sipper that delivers sweet and smoky notes in perfect lockstep. It works equally well as a pre-dinner palate cleanser or paired with dessert; at $99, it also represents great value for a special-occasion tequila.” — InsideHook

“Volans is made in the highland region at the El Pandillo distillery by famed tequila producer Felipe Camarena. He uses a combination of water sources — rainwater, deep well water and spring water — from the property to complement the agave grown in the region. Aged in American oak barrels for 3+ years, the oak adds a hint of sweetness and smoke. It’s definitely on the lighter and drier end of the spectrum.” — CK

“This tequila spends 5+ years in used red wine barrels and then is finished in new American oak barrels. The time in red wine barrels gives a red fruit sweetness to this extra añejo and the finishing in oak adds just the right amount of spice.” — CK

“For those who enjoy the spicier, dried fruit flavors that can come from aging tequila, D’Antano is a perfect choice. Think vanilla, baking spices and caramelized bananas. Owner Juan Fernando Gonzalez and Master Distiller Arturo Valle-Salcedo blend aged tequilas from their barrel house that have been in barrels up to 15 years with younger profiles to get to the balance and rich agave flavor Siete Leguas is known for.” — CK 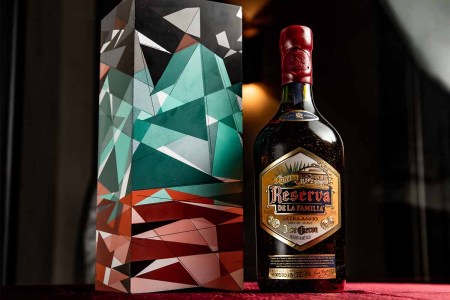