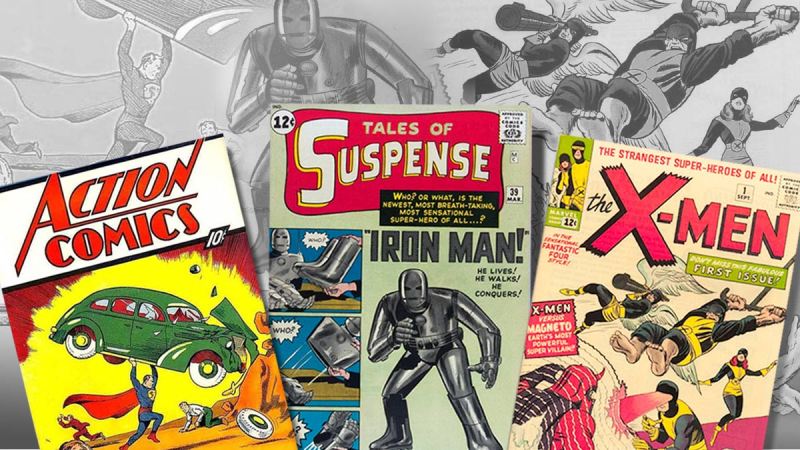 For those collectors who graduated from reading comic books as kids to investing in them during their adulthood, the glut of Marvel and DC universe movie blockbusters of late has been a super boon to their portfolios.

The most recent big-screen release, Logan—the last of the Wolverine franchise to feature star Hugh Jackman—has no doubt helped The Incredible Hulk No. 181 (the character’s first appearance) shoot up in value. Even X-Men No. 103, the first time Wolverine is referred to as “Logan,” should be getting an uptick in value.

But as high-priced as the Wolverine books can get—that first appearance runs collectors in the $6,000–$7,000 range on eBay, depending on grade or condition—by no means do they take the cake when it comes to prices realized at auction for single issues. Those are more for Bruce Waynes then for Peter Parkers (at least back when he was a photojournalist).

CBR.com recently collected data on the most expensive per-title comic book sales at auction of all time. (Note: Each issue was graded on a one to 10 scale of condition by CGC Comics; we have not included the grades in our list, but all of these issues were in very fine to near-mint condition.) 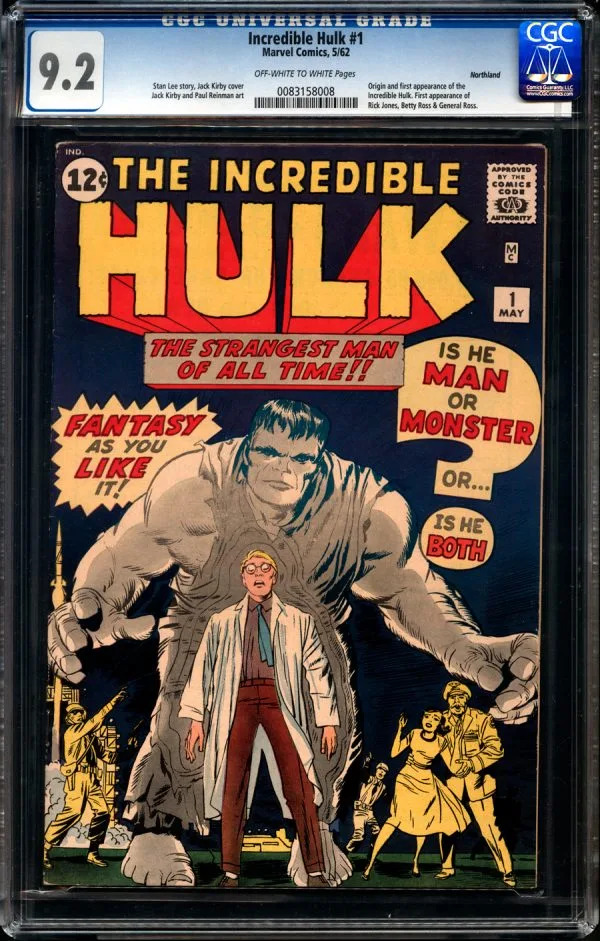 (10) The Incredible Hulk, No. 1 ($326,000) – First released in 1962, the comic was the first to feature the story of scientist Bruce Banner, who stepped into the wrong gamma radiation blast, turning him into the giant, angry, green monster known as The Hulk. It’s since been adapted to a popular ’70s TV show, as well as a number of theatricals. 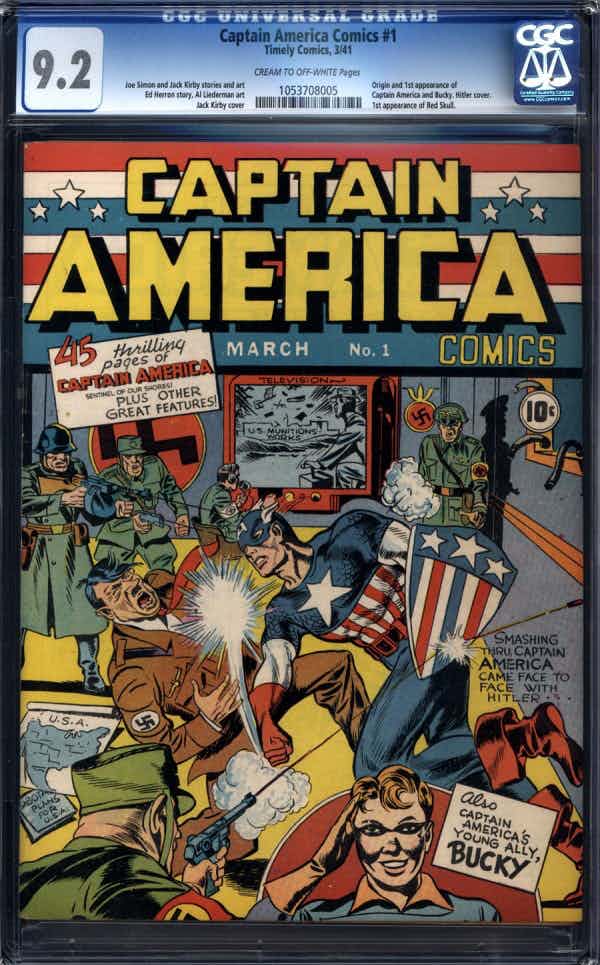 (9) Captain American Comics, No. 1 ($343,057) – No doubt an inspiration for Michael Chabon‘s Pulitzer Prize–winning The Amazing Adventures of Kavalier & Clay, this 1941 comic introduced audiences to the Nazi-punching hero that is Captain America. Its iconic cover features the masked man, decked out in red, white, and blue, socking Hitler with a strong right haymaker. (The comics’ Jewish creators, Jack Kirby and Joe Simon, received anti-semitic hate mail and death threats for the cover at the time.) 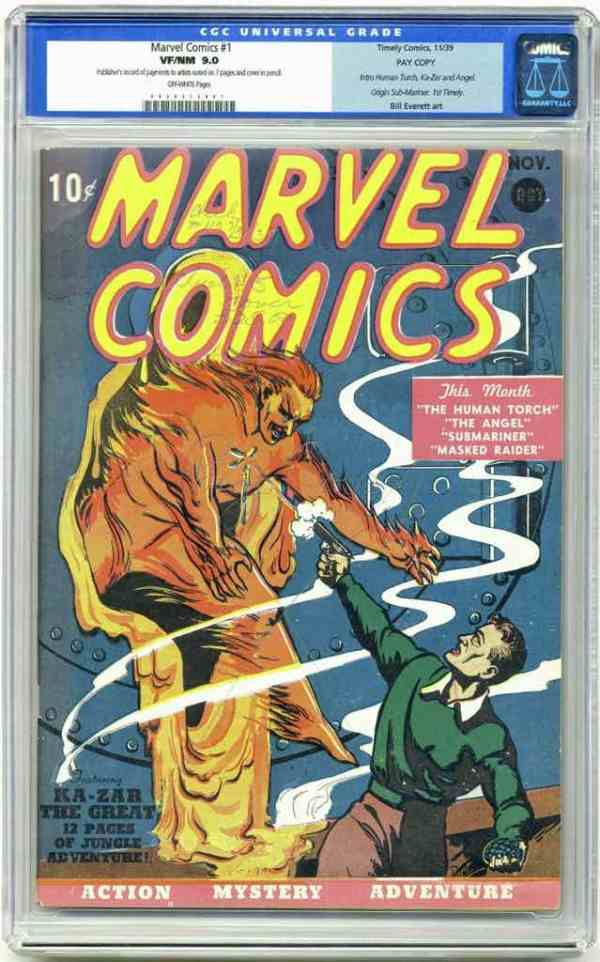 (8) Marvel Comics, No. 1 ($350,000) – This is where it all began for Marvel. And its authors happened to include first appearances of future superhero superstars Namor the Sub-Mariner and the Human Torch, not to be confused with the hero of the same name on the Fantastic Four.

(7) Tales of Suspense, No. 39 ($375,000) – In 1963, thirty-nine issues into its run, Stan Lee and Jack Kirby hit a home run, scripting the story of a man who donned an iron suit that gave him superhuman strength and the ability to rocket around in the sky. Decades later, the character would help save the career of Robert Downey, Jr. 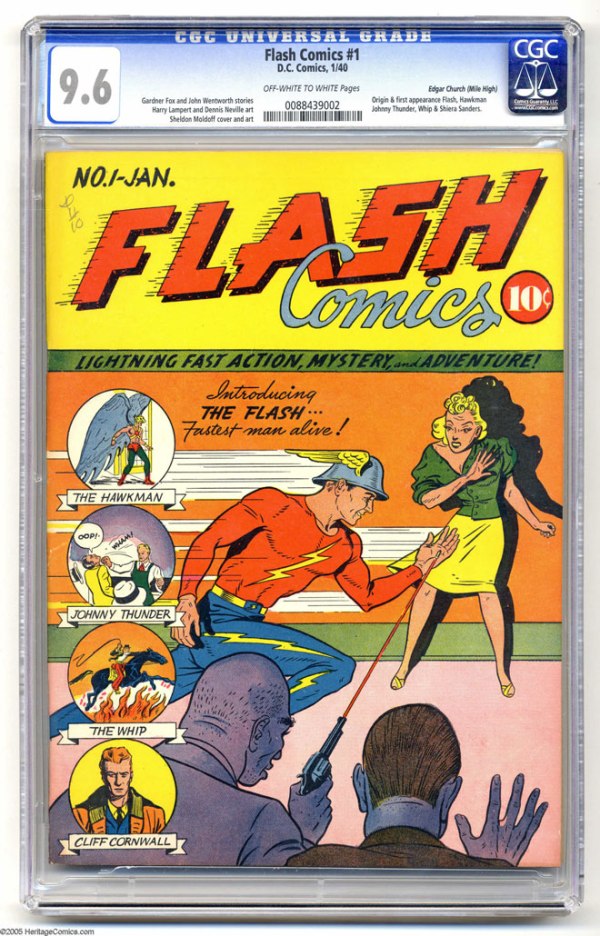 (6) Flash Comics, No. 1 ($450,000) – This issue features the first appearance of The Flash—though a previous version than the currently popular one racing his way around his own TV series on The CW—as well as Hawkman. 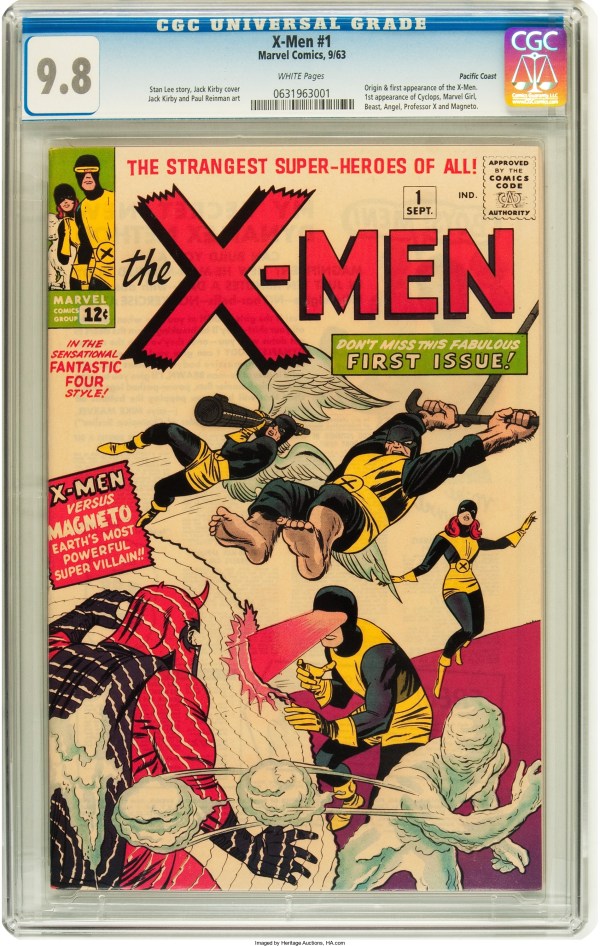 (5) X-Men, No. 1 ($492,937.50) – This is basically the story that launched a thousand ships of the comic book world: The first appearances include X-Men characters such as Beast, Cyclops, Iceman, Professor X, and villain Magneto; as well as the X-Men storyline that’s since been translated into the blockbuster movie franchise. 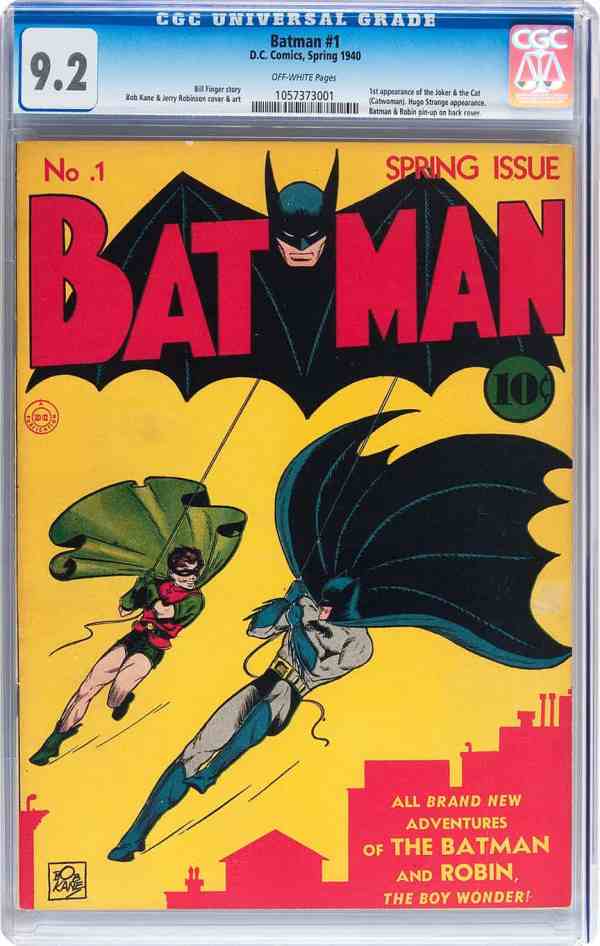 (4) Batman, No. 1 ($567,625) – This wasn’t the first appearance of the dynamic duo that is Batman and Robin. However, it did mark the debut for villain the Joker and the minx-y Catwoman. It also gave the Batman storyline a permanent home after his successful run in Detective Comics. 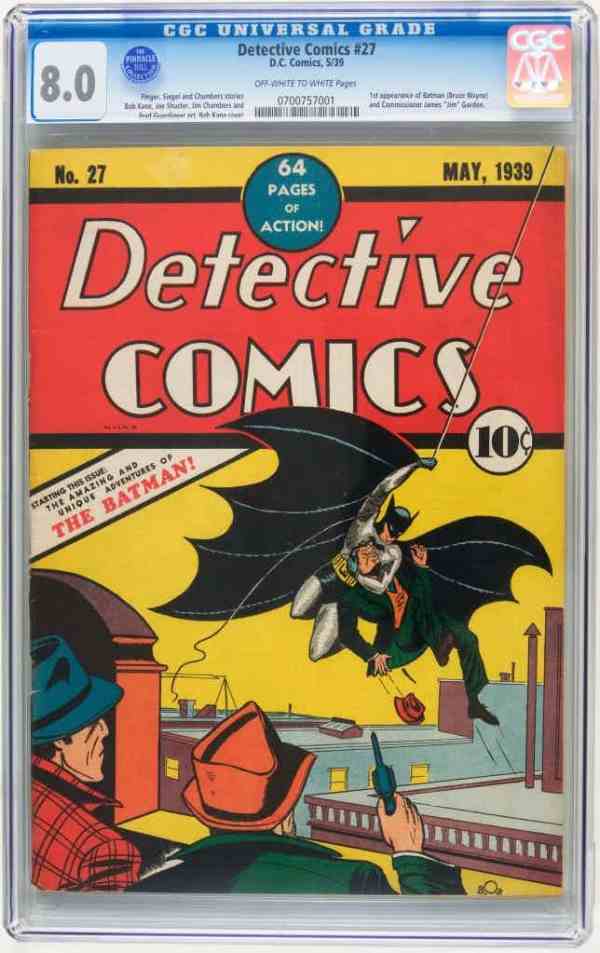 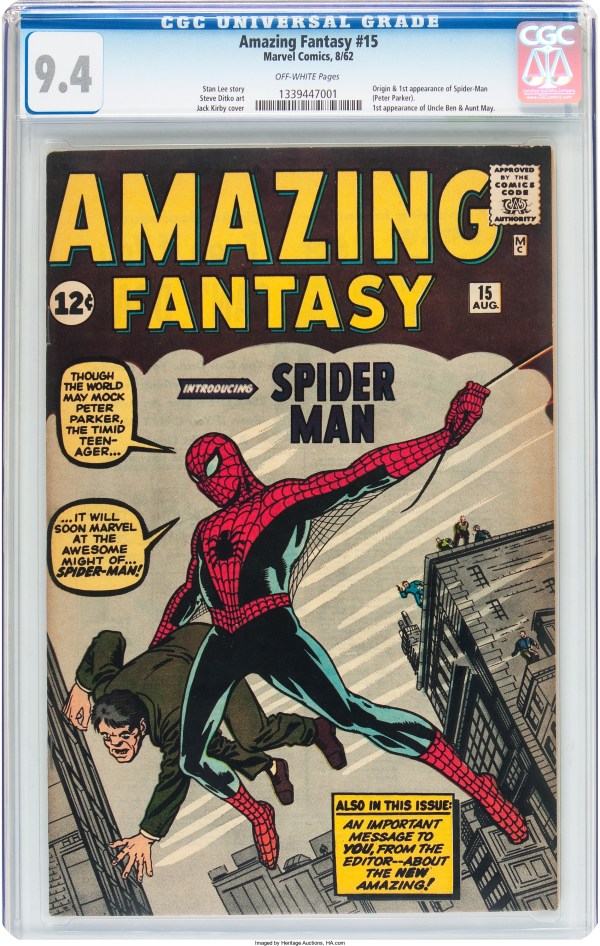 (2) Amazing Fantasy, No. 15 ($1.1 million) – With a similar-looking cover to Detective Comics No. 27, this book features the first appearance of everybody’s favorite neighborhood web-slinger, Spider-Man. Stan Lee and Steve Ditko’s creation was originally thought of as a throwaway character and thus introduced in the final issue of a low-selling anthology series. 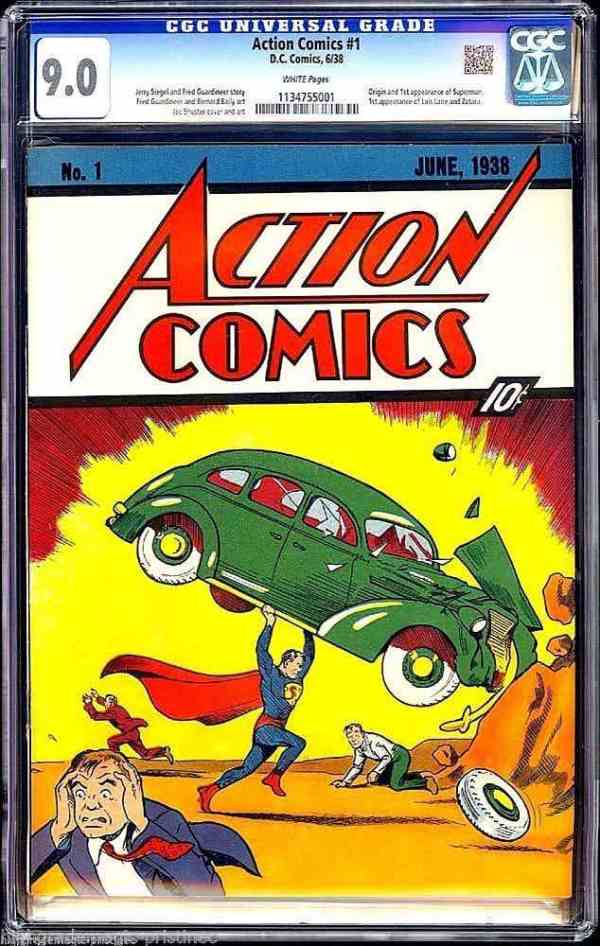 For a little more background on Action Comics No. 1, watch the video below.