See the photographers that rose above the 8,000 entries submitted

These photographers are looking down on their subjects.

The competition was organized in partnership with National Geographic and received around 8,000 photo submissions from around the world.

Here are the winning photos from each category. 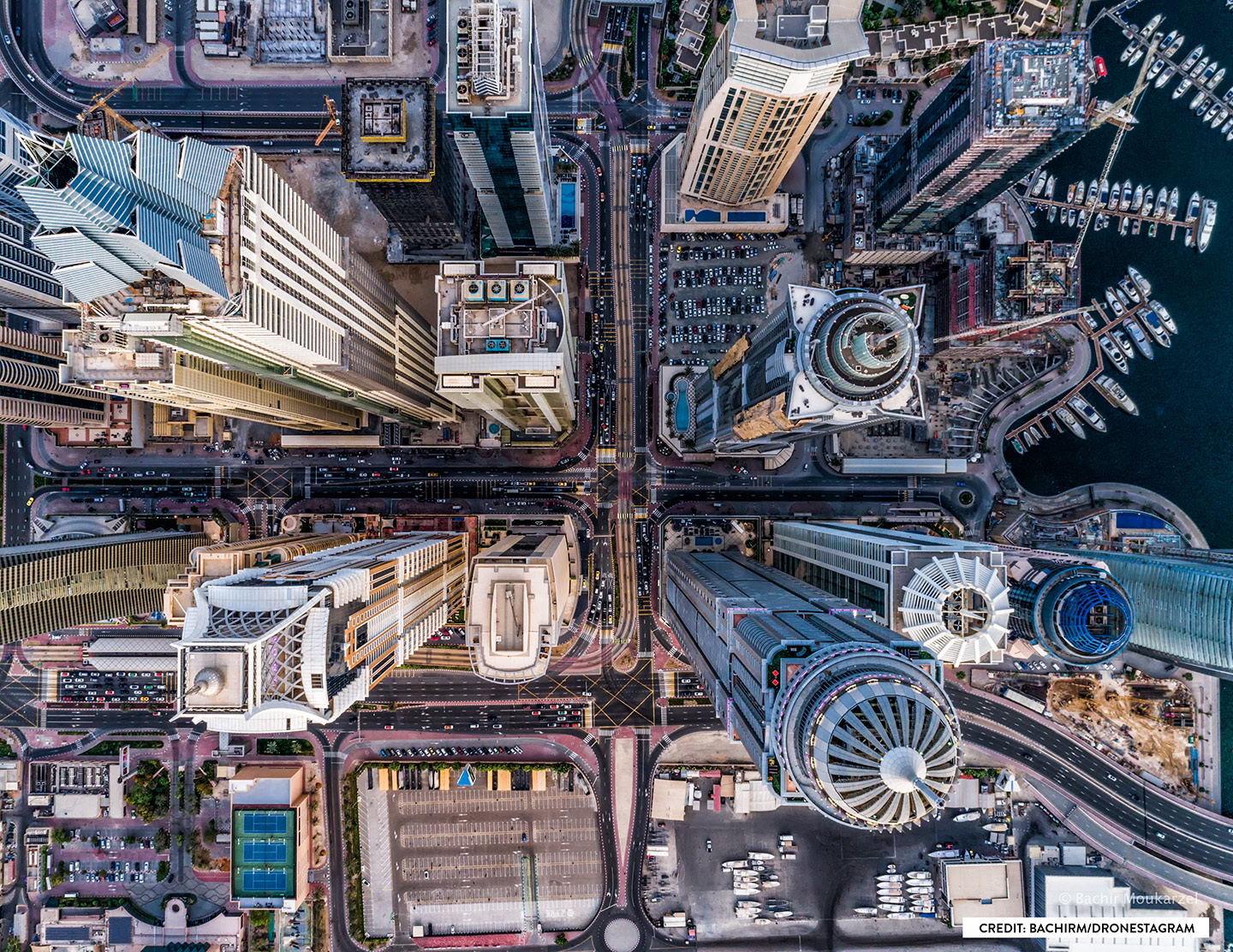 1st Place: ‘Concrete Jungle’ by bachirm, United Arab Emirates.
“This picture was shot at sunset time in Dubai at 6pm, trying to capture an area which was a literally a desert 10 years back and now became a concrete jungle with the highest buildings in (the city).” 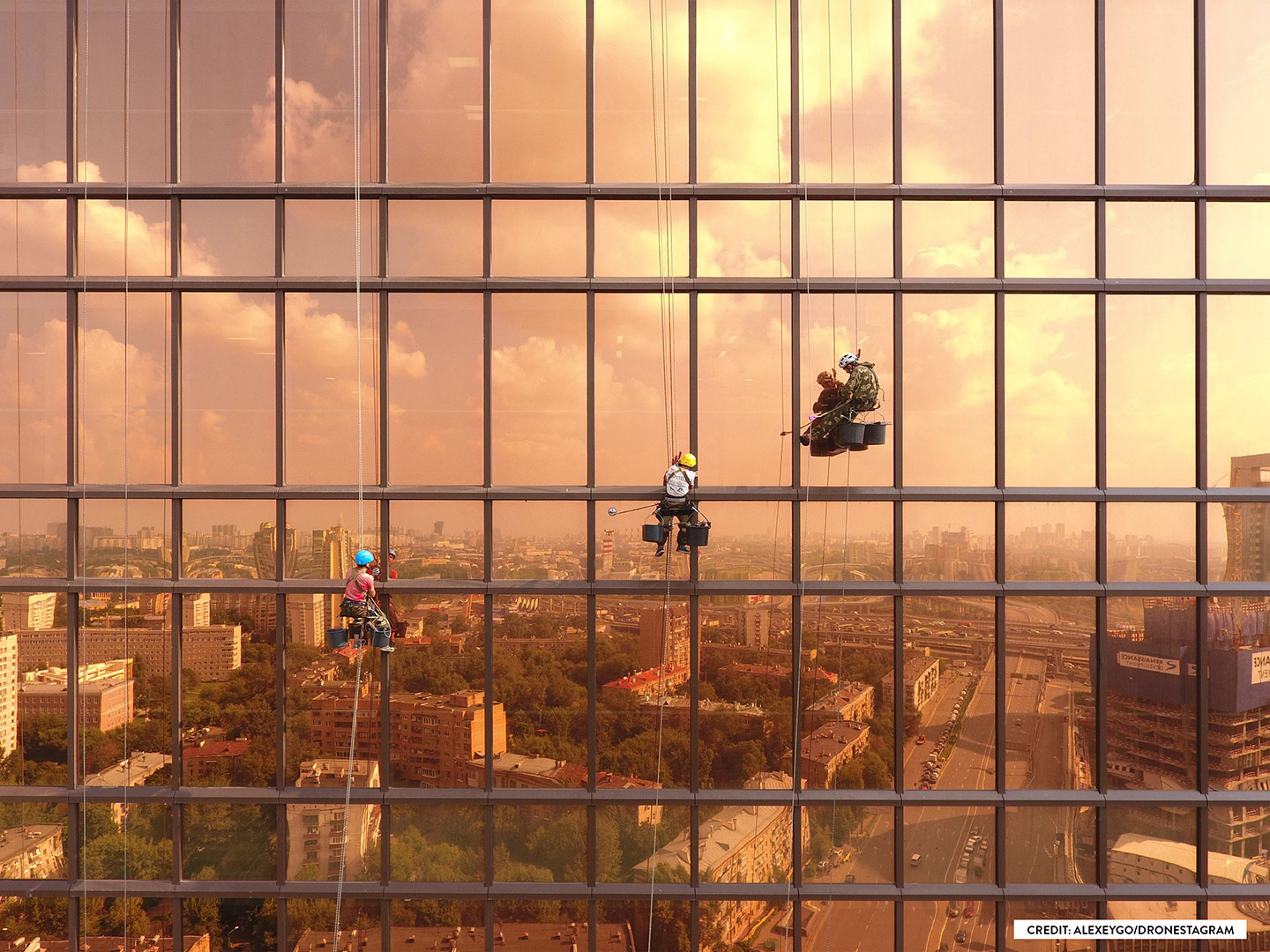 2nd Place: ‘Dawn On Mercury Tower’ by alexeygo, Russia.
“Sometimes going to work I leave home a little bit earlier and I get my drone with me in order to take a flight. That was the case with (this) photo. I was sitting on a bench at the square near Moscow International Business Centre in search of a beautiful reflection in mirror windows of Mercury Tower. While in the flight, I saw industrial climbers. I liked the way their work looked from that perspective: they seemed to wash the city itself, not just the building’s windows.” 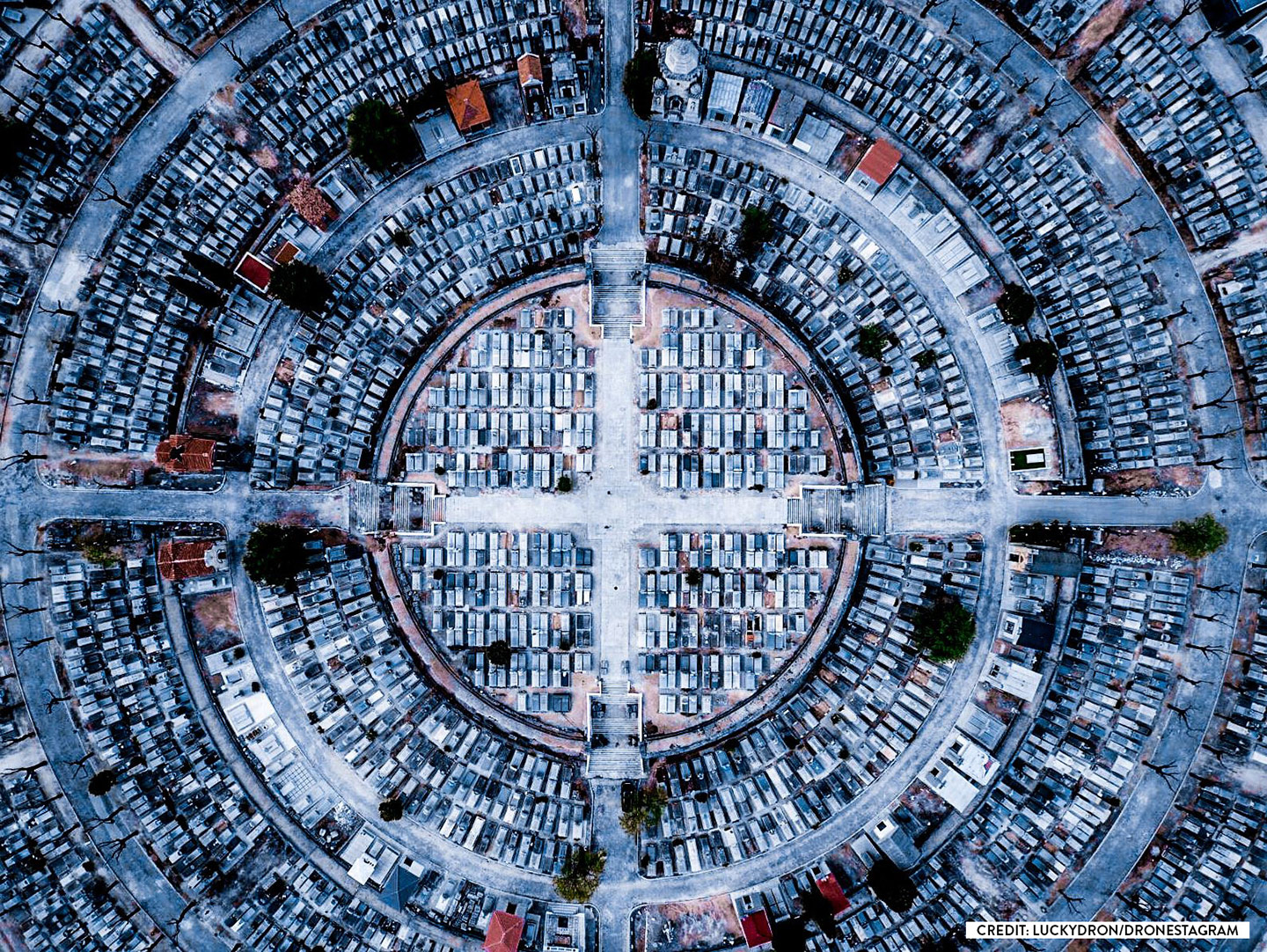 3rd Place: ‘Peace’ By luckydron, Spain.
“I was in Madrid looking for a nice place for flying my drone and add it to my Instagram account(@luckydron). And I found a good place for taking a picture and when I saw my picture, it was really cool and symmetrical. In my point of view, it is hard (to take a picture) like that.” 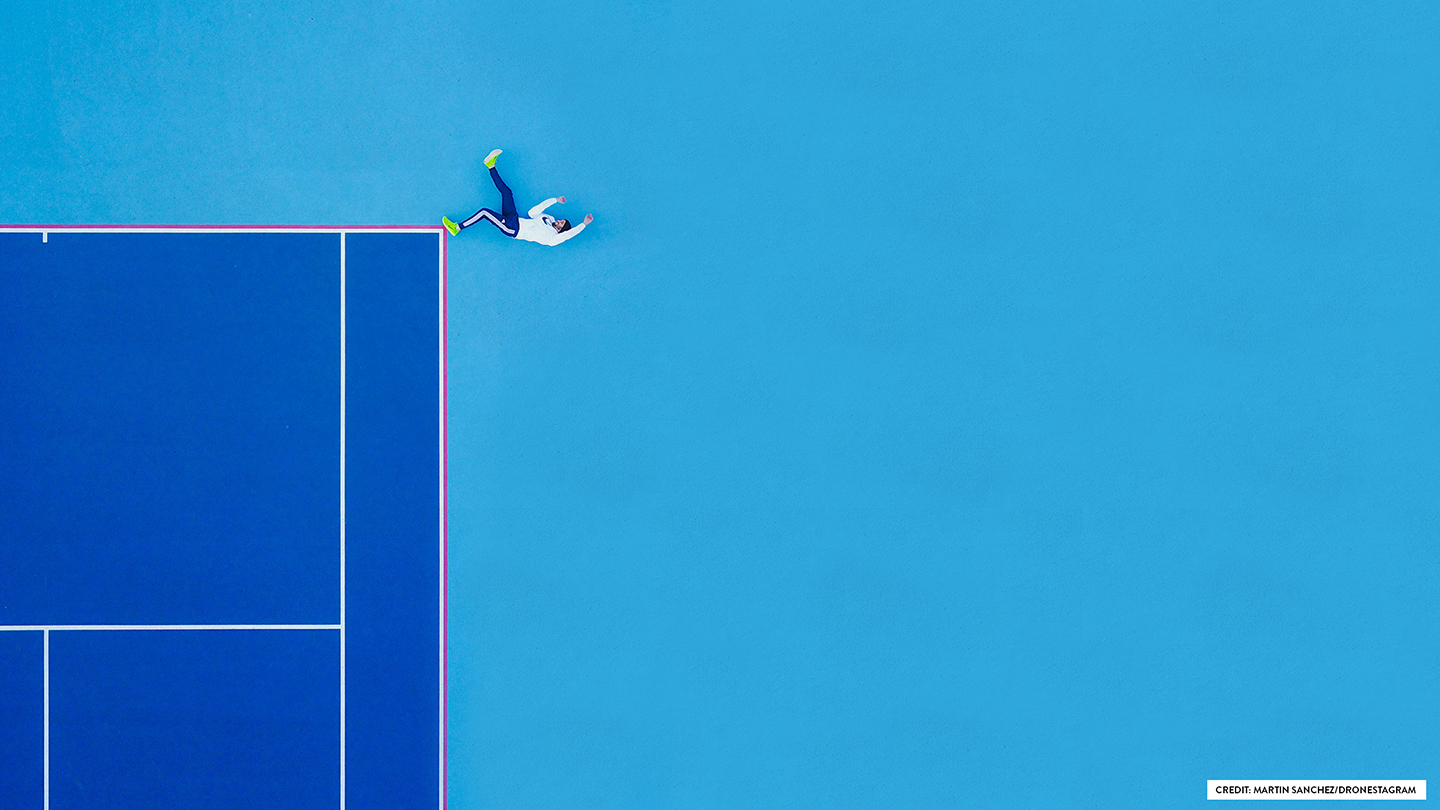 1st Place: End of the line, by Martin Sanchez, United States
“It was on a Saturday afternoon in April just before sunset. Earlier in the day I had my batteries fully charged and decided to drive down the New Jersey coast. It was great because the beaches were empty and the coast was clear. The day was fair with the sun peeking here and there. After a full day of exploring and shooting the coast, I was tired and haven’t had anything to eat. All I had was the fuel of some good iced coffee. It was time to finish up so I drove through town to get back on the main highway. While driving, I noticed an empty tennis court that just stood out like a treasured story in a book of empty words. First thing that came into my mind was, can’t finish the day without some visual drone art. I…. This was perfect. After a few takes things got a little weird. Two people came by to play some tennis on the other court. Which no one can disagree, normal thing to do on a tennis court. As they got closer they had no idea what was happening on my end. They seemed very confused, watching (me) just lay on the ground and make weird holding positions. They didn’t know whether to play or call for help. When I was all done, I showed them the somewhat final result and both of them said, ‘Ohhhh! I get it.’” 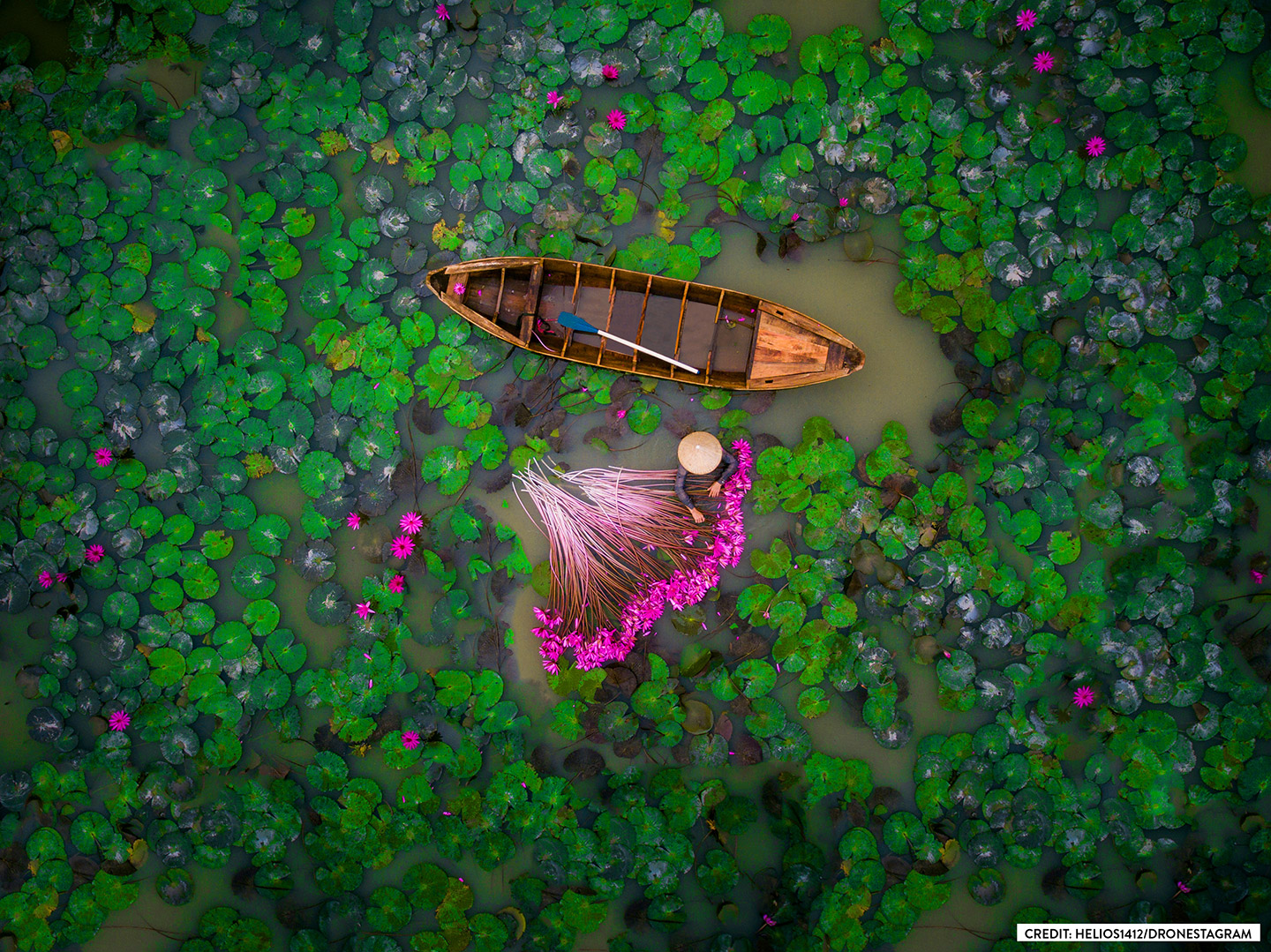 2nd Place: ‘Waterlily’ by helios1412, Vietnam.
“A woman harvests water lilies in a pond in the Mekong Delta in Vietnam.” 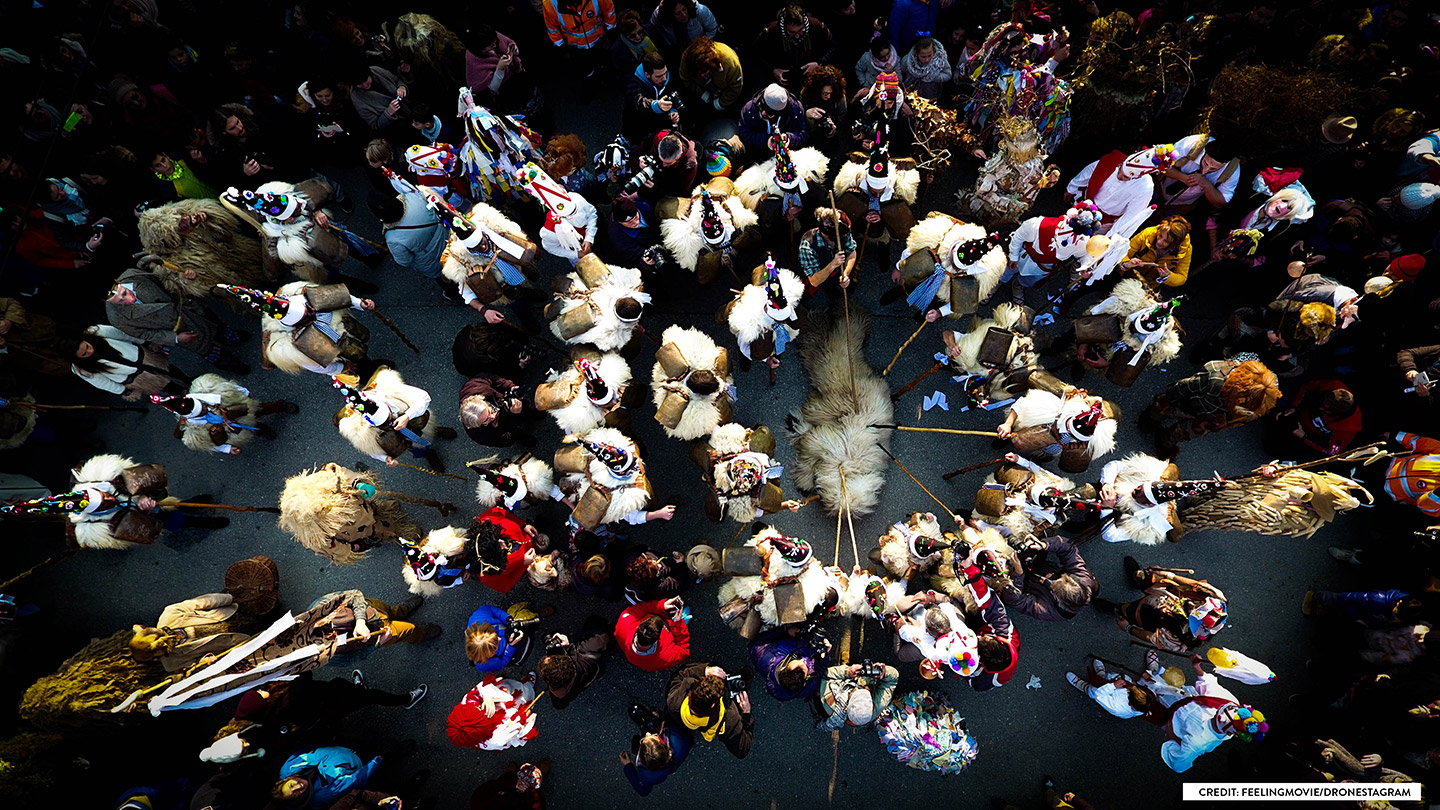 3rd Place:’La Vijanera’ by Javier Bustamante, Spain.
“La Vijanera is a winter carnival that takes place in the town of Silió, in Cantabria (Spain), the first Sunday of each year.  This party consists on a group of hunters who want to capture a bear…. This photo is the end of the party in which the bear is captured.” 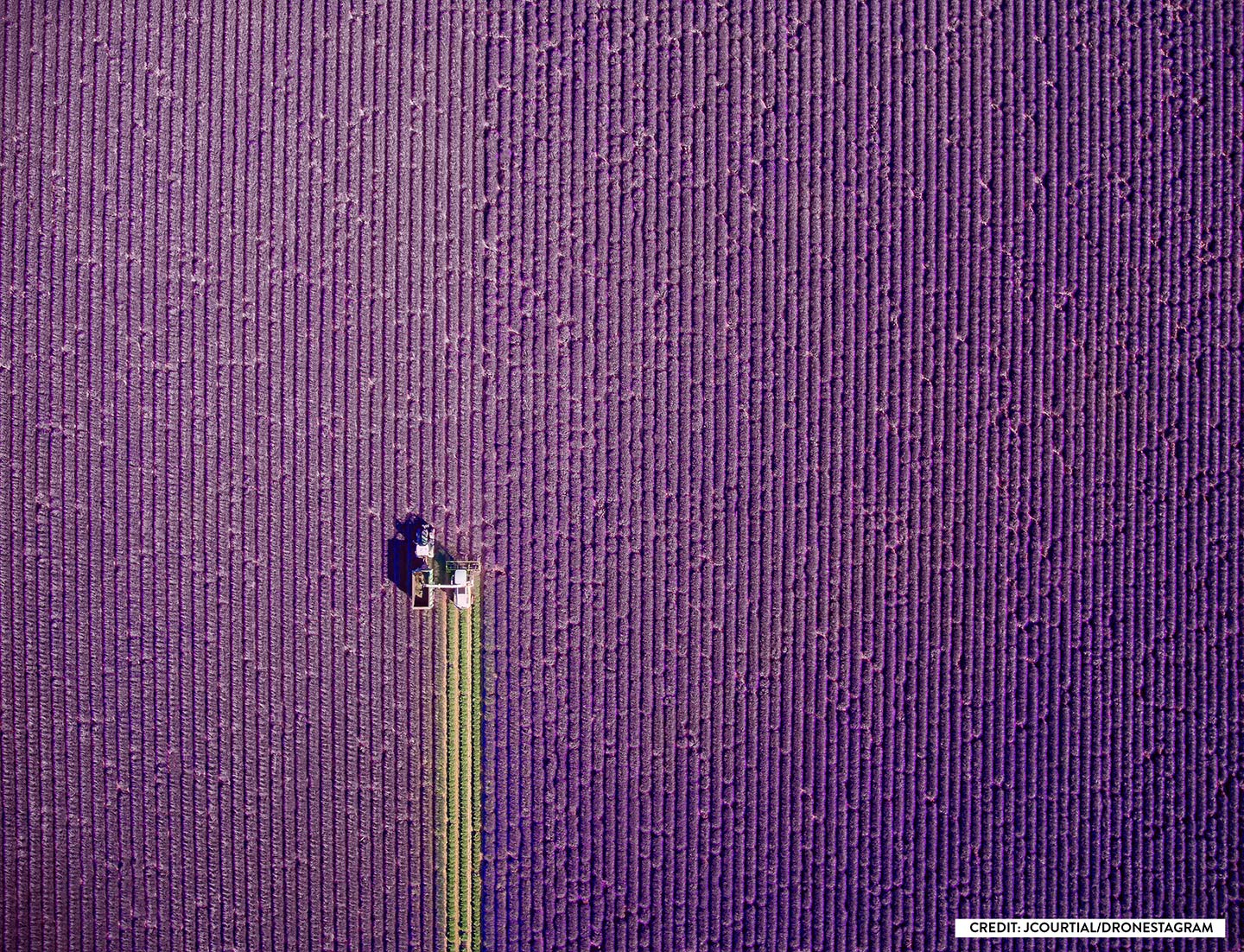 1st Place: ‘Summer Trim’ by jcourtial, France
“I went to Valensole hoping to get an original picture rather than the classic view with the sunset in the background. I knew this was the beginning of the harvest season, so I hunted down tractors and waited patiently until some started to harvest in a pattern that would create a pleasing composition from above. I just had to start the drone engine and capture the photo against really strong wind. I thought I would have had a nice picture in the day, but I had no idea this one in particular would be so well received. My girlfriend was with me and I must thank her for you patience as we waited quite a long time to find the perfect spot. It has now become my favorite picture ever taken.” 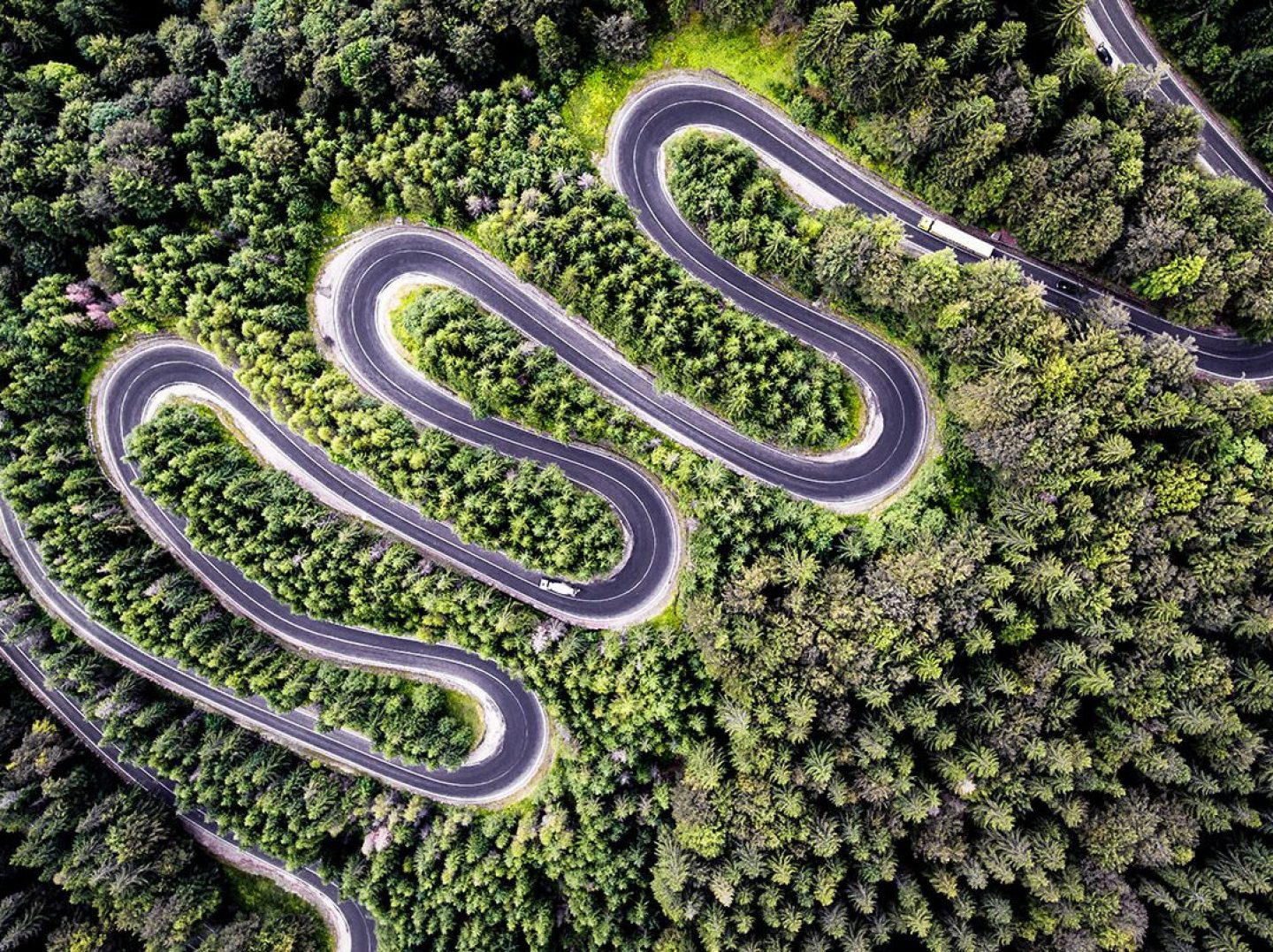 2nd Place: ‘Infinite road to Transylvania’ by Calin Stan, Romania
“This is the image of Cheia DN1A road that takes you to Transylvania, here in Romania. Yes, THAT Transylvania. Or, as the legend says, this is the view that Count Dracula himself saw on his nocturnal flight. The truth is that this is the first road that I have photographed with my drone for the Transylvania Roads Project. It all started last year in July when I was eager to see the world differently.” 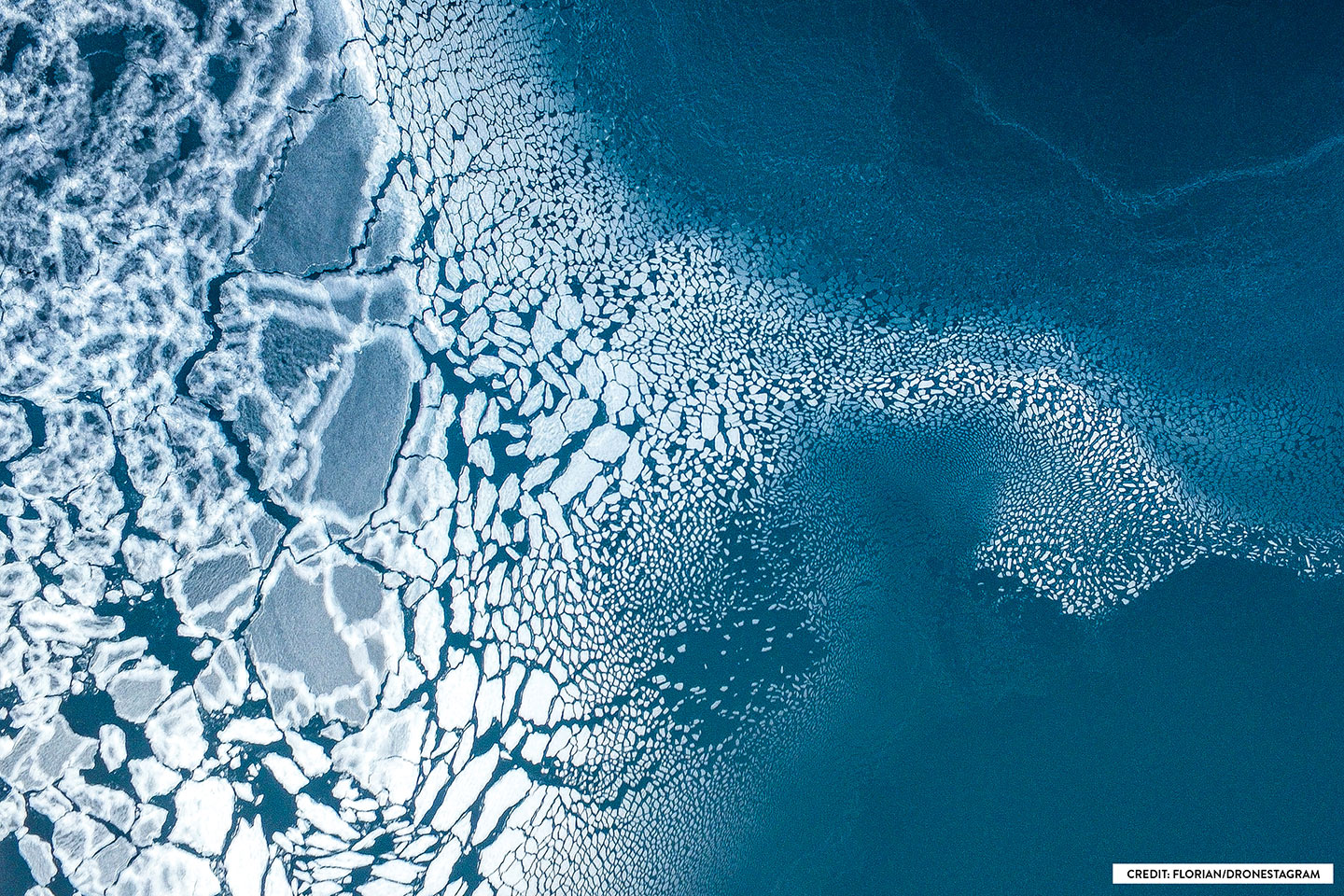 3rd Place: ‘Ice formation’ by Florian,Greenland
“This photo (was taken) during winter in East Greenland, which is one of the most remote places on Earth. During that period, it’s really hard to get there depending of the weather conditions. The drone was not guaranteed to work by minus twenty degrees and I got lot of trouble during the expedition to reach the photo I wanted. I flew from Kulusuk settlement to reach the open sea where the ice had started to be formed. (It was) around three kilometers above the ice and cold water in freezing environment. It was a risk, and probably because of this risk I crashed the drone one month later on Senja island in North Norway. I have attempted to fly here several time as the drone get attacked by two (falcons) that tried to capture it as I was flying on their territories.” 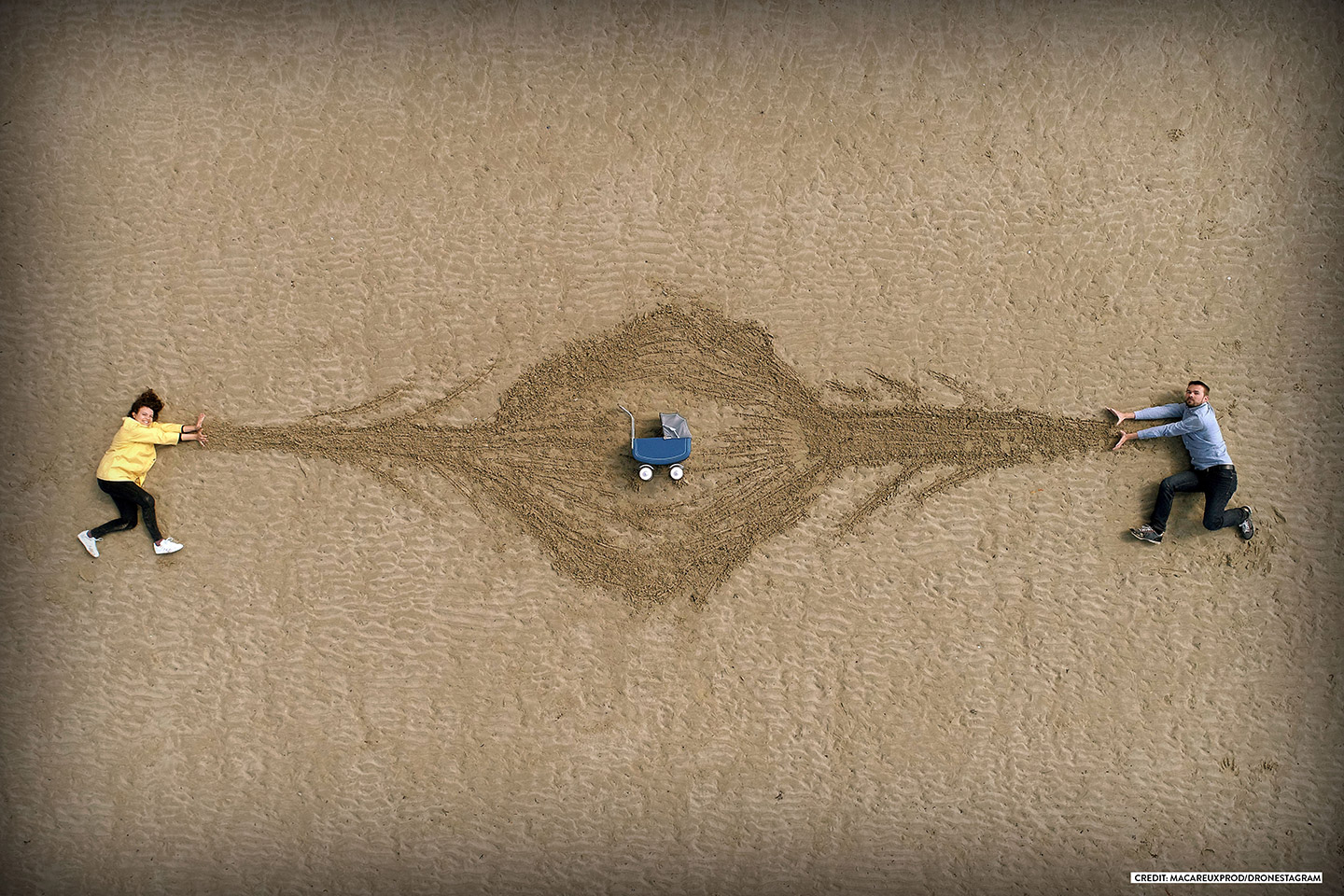 ‘Next Level’ by Macareuxprod
“This picture was captured on a Normand beach with my girlfriend Manon. We look forward to a happy event (a baby) and look for a fun, original, and unusual way to announce it to our loved ones, family and friends. So I had the idea of this picture : Manon & myself creating a baby, represented by an old pram and (looking) like a video game.” 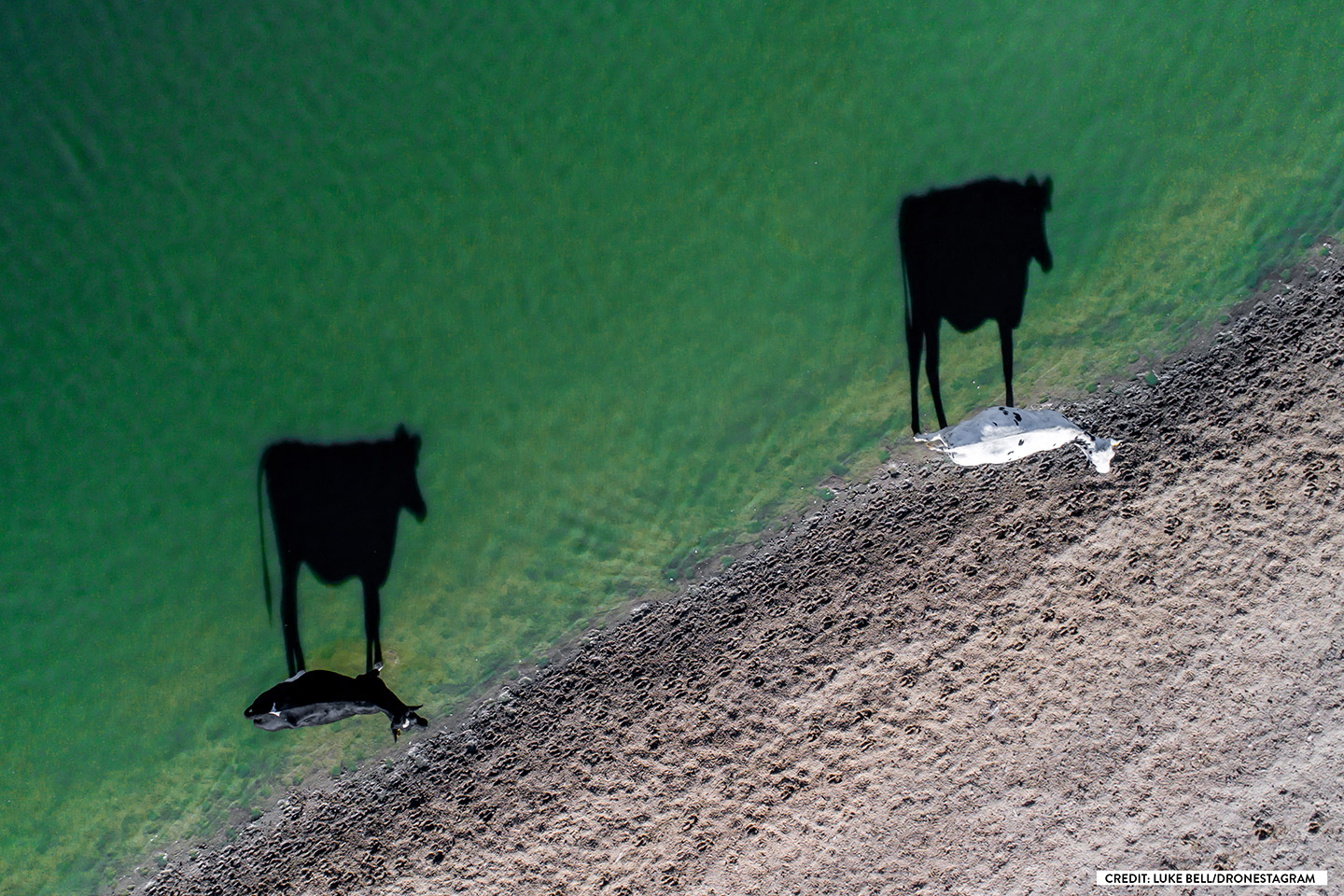 ‘Two Moo’ by luke Bell
“It was a cold early morning in South Africa on a farm near Stellenbosch. Two cows drinking from a nearby dam caught my eye when I saw their long shadows. I launched my drone to capture the scene in a way impossible with any other type of camera.” 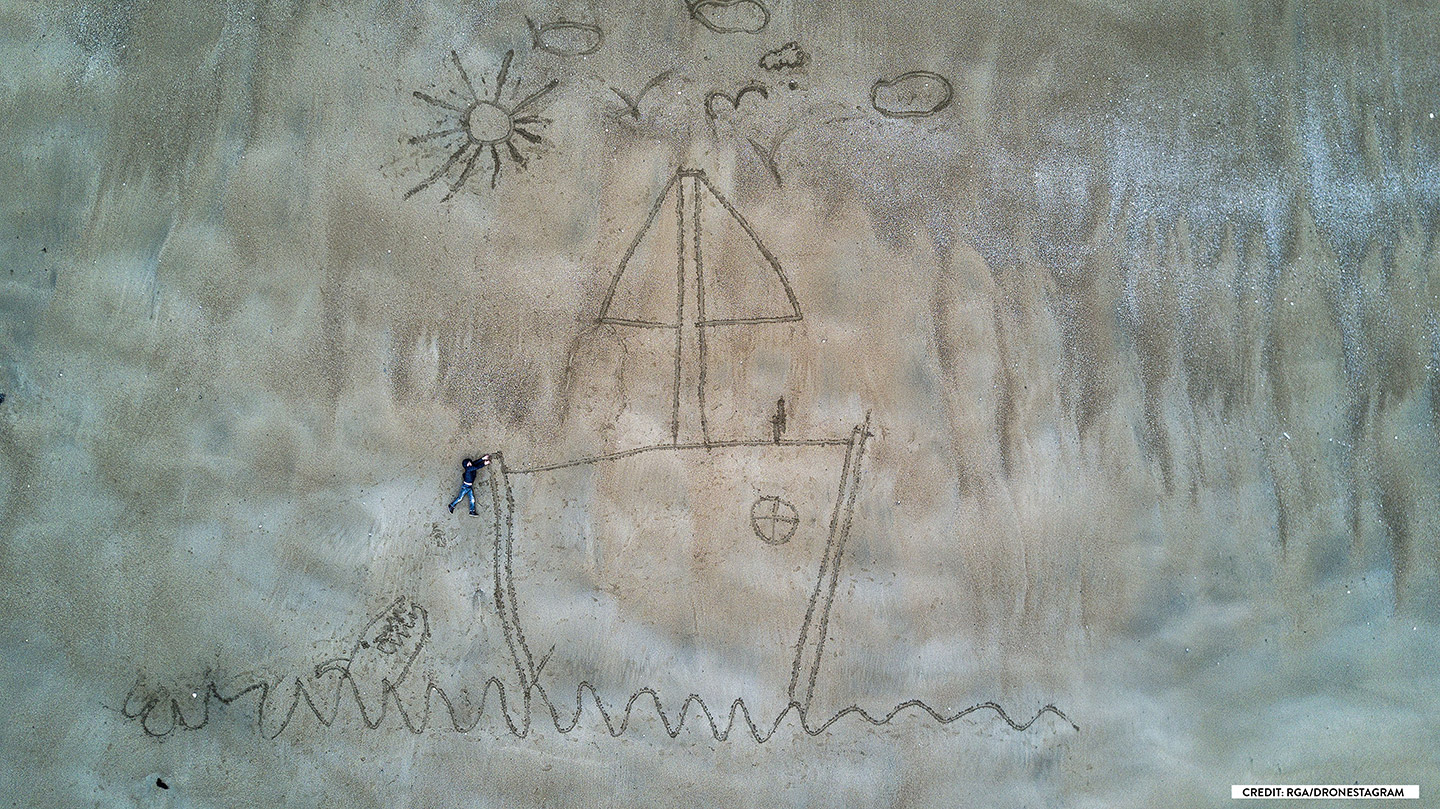 ‘Ugo le marin’ by Rga
“This picture was taken early in the morning, I had gone to the beach to
take some pictures. After two flights I did not find anything interesting
and the weather was rather bad. I was going to leave but I had one last
battery left. As I watched my children playing on the beach and drawing in
the sand I had the idea of ​​using the sand as a large sheet of paper.
So my two sons and myself drew a scene related to the sea, on the image
you can see my oldest son.’