“My art is something that really lives and breathes on non-traditional canvases, whether those are painted people or a former Best Buy. Art can happen anywhere. It does not just need to happen in a gallery setting.” That’s artist Alexa Meade discussing her art and some of the unlikely places where it’s been visible over the last few years. She’s not kidding about the Best Buy part, either. In the latest instance of New York City commercial real estate being used for creative ends, Meade’s latest installation evokes Alice’s Adventures in Wonderland, all situated in a former retail space located a few blocks from Bryant Park.

Wonderland Dreams, slated to open on October 7 and run for six months, is an immersive work of art that contains a few knowing nods to art history and Meade’s own previous work. This isn’t the first time Meade has used her art to evoke Lewis Carroll’s classic novel. As she tells InsideHook, she’s explored Alice’s world before — just not at this scale.

“It first launched on Rodeo Drive in Beverly Hills in 2018 — and that was in a 4,000 square foot space,” Meade explained. “Then I brought it to New York City in 2020, to a 14,000 square foot space. Unfortunately, that show never got to open because of Covid.” The scale of this installation is significantly larger than either of its predecessors, however — to visit Wonderland Dreams now is to take in a space encompassing 26,000 square feet.

The rooms that comprise Wonderland Dreams abound with allusions to Carroll’s novel — giant playing cards, an expansive tea party and dramatic shifts in scale can all be found within its walls. The style in which these rooms have been painted also makes them stand out — Meade’s expertise is in painting three-dimensional objects so that they resemble a flat canvas. “Every possible surface of an object gets covered in paint so it’ll look two-dimensional from every point of view,” says Meade.

The question of how to evoke three-dimensional images in a two-dimensional space — or vice versa — is one numerous artists have addressed in different ways. Meade’s methods represent one approach to this; the works of, say, M.C. Escher or Trevor and Ryan Oakes showcase other ways to consider it. Walking through the different rooms of Wonderland Dreams is pleasantly disconcerting; watching video recorded in the space is even more so.

“I developed this concept in 2009 when I wanted to know what it would look like to put paint on shadows,” says Meade. “Then I started putting paint directly onto people where I saw shadows and it evolved into realizing that I can make the world look like a three-dimensional painting just by capturing shadows.”

Those interests in light, shadow and perception have taken Meade to some unexpected places. She’s been the artist-in-residence at the Perimeter Institute for Theoretical Physics, and has given lectures at technology companies like Apple, Google and Adobe. For Meade, that’s of a piece with a dedicated curiosity about where science and technology are headed.

“A lot of people in the art world want to know where I draw my references from, or who my artwork is in dialogue with in terms of past art historical figures, but I actually get more inspiration from theoretical physics or research about visual perception than I do looking at the canon of art history,” says Meade. “There’s such amazing cutting edge work being done in technology that is more informing the way I look at my body of work.”

Meade cited a residency at Google as having been especially influential. “My artist-in-residence [time] at Google and collaborating closely with Paul Debevec has been really inspiring,” she says. “I mean, collaborating with them on the team, developing light-field and light-stage technology which captures the directionality of all the rays of light in a space, so that you can recreate and reconstruct the three-dimensional space after the fact. In my artwork, I am taking a three-dimensional space and capturing the light and shadows but with paint, and so I find an interesting parallel in that.”

Walking through Wonderland Dreams involves passing through rooms utilizing a variety of artistic styles, from idyllic Impressionist skies to delirious Pop Art-inspired designs. There’s also one section that offers a memorable spin on Meade’s interest in science and perception. “There’s a collaboration between me and my friend Aza Raskin and that area is blacklight lit. And guests are given these special diffraction glasses that turn the world into rainbows,” Meade explains. “As they’re going through this space, there’s neon spandex hanging down from the ceiling. It’s a completely disorienting experience.”

According to Meade, the stylization on display throughout Wonderland Dreams is also well-suited to evoking a two-dimensional space in three dimensions. “If I try to paint things to look too close to reality and colors that are too similar — muted gray tones, say — then the painting doesn’t have as much dynamic interest. And so it’s a constant dance to figure out how I create something that is recognizable for the underlying objects but then elevates it and turns it into a work of art.”

With 26,000 square feet to work with, Meade also had to figure out what aspects of Alice’s Adventures in Wonderland to incorporate into Wonderland Dreams. “There are certain iconic scenes from the book where if I left them out, I think people would be upset,” she said. ”If anything is billed as an Alice’s Adventures in Wonderland-inspired experience, you want to go to a mad tea party and you need a Mad Hatter.”

“I brought in some of those storylines, like the mad tea party; there’s a hedge maze that guests can get lost in,” she adds. “There are tiny houses so you can be like Alice when she’s grown so tall as to be a giant. If you no longer fit inside of the house, there are color changing mushrooms and a giant house of cards. And that also comes with loose cards that you can use and play with.”

The tactile elements of Wonderland Dreams did pose some challenges for Meade and her team. “Everything is being coated with multiple coats of varnish, so that we can wash things down with soap and water and treat it as you would any other surface,” says Meade — and points out that there are backup copies of physical objects in case anything requires repair. As it turns out, Wonderland can require maintenance, too.

“We’ve gone through over 1,000 gallons of paint, and we are nearing 2,000 gallons at the moment,” says Meade. “We have not yet called the Guinness Book of World Records, but we are under the impression that this may very well be the world’s largest painting.”

“It is a lot of freaking paint,” she says. But it also represents a memorable blend of perception and immersion — and one that offers a 21st-century spin on a 19th-century favorite at that.

“Wonderland Dreams” is on display at 529 5th Avenue in NYC. For info and tickets go to wonderlanddreams.com. 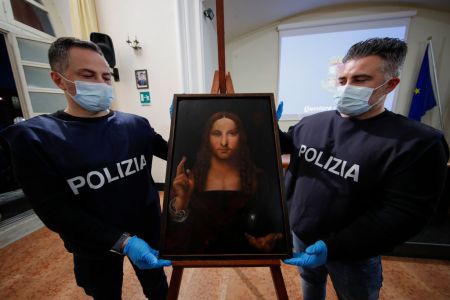