Head for these out-of-the way drives to rediscover the best—and weirdest—America has to offer.

Is there a sight more welcome than an open stretch of sprawling road? One foot on the clutch, the other on the accelerator, winding your way through America’s highways with nowhere to be and all night to get there?

This round-up is for the classic car lover who’s cash rich, time poor, and in desperate need of a kick in the boot to finally get behind the wheel and check out the best places across the states you’ve heard of—and never explored before. Take a look. 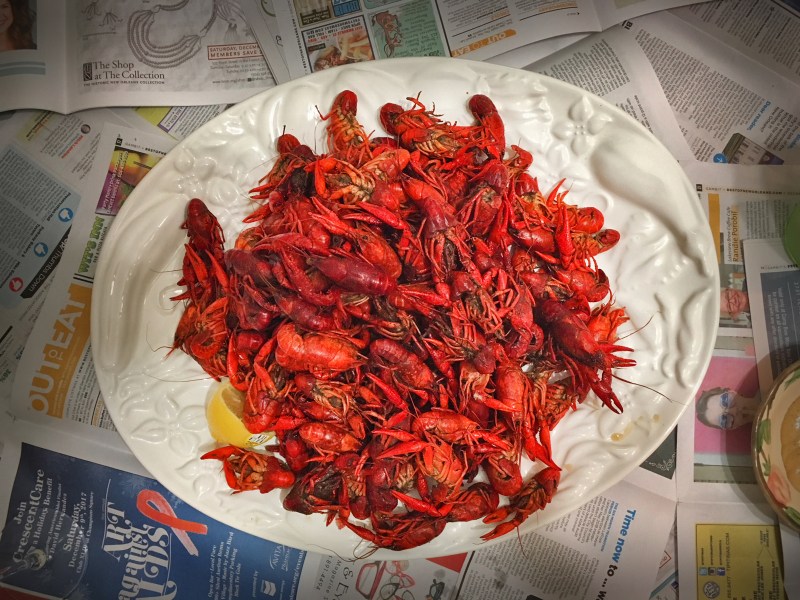 What is there to write that hasn’t already been said about down-home Louisiana cooking? Crusty shrimp po’boys. Cajun sausage. Chicken and andouille gumbo. Just glimpsing the names is enough to send a grumbling stomach into full-blown famish mode.

But we’re not in the business of appetite suppression. Hop on the Zydeco-Cajun Prairie Scenic Byway if you’re craving Louisiana cooking—and culture—like nowhere else in the state. The road is 283 miles long and zigzags through the state’s Acadiana country. There you’ll find French-speaking Cajuns mixed with open prairies in what National Geographic calls “a fascinating mix of cultures.” The state’s tourism website recommends to give yourself a day or two to make your way along the route, and don’t forget to stop in Mamou, especially in August, when they hold an annual music festival. But if you can’t get there during the celebration, don’t sweat it—there’s Cajun music and dancing every Saturday at Fred’s Lounge. 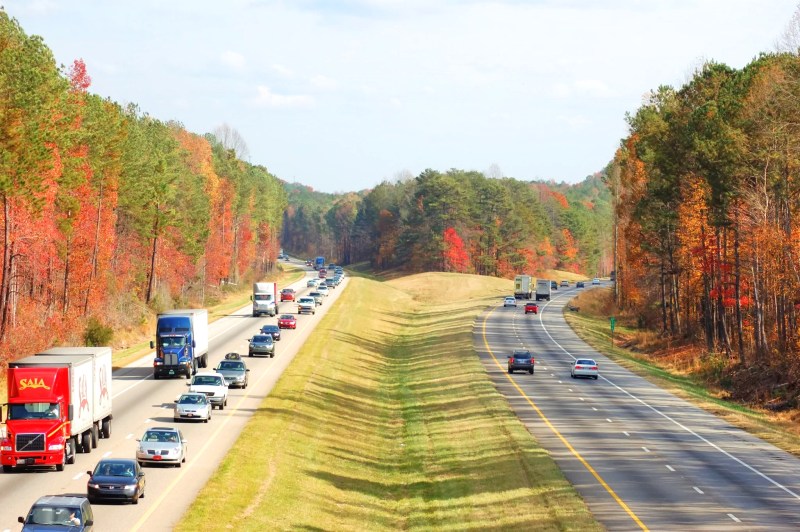 Alabama’s Highway 78 is the road trip to take if you’re looking to impress a passenger. The Appalachian Mountains serve as the stunning backdrop to this scenic byway, which starts from Lookout Mountain in the north and unspools in front of you until it ends at Cheaha Mountain, 80 miles south. And though the hillsides might not impress our Western readers who are used to higher altitudes, the leaf peeping will.

Hit the road in late autumn and take a walk through a brilliant blend of foliage in Talladega National Forest—including crimson dogwoods and burnt orange maples—before you stop to cast a line in Weiss Lake. Both are easily accessed from the main drag. 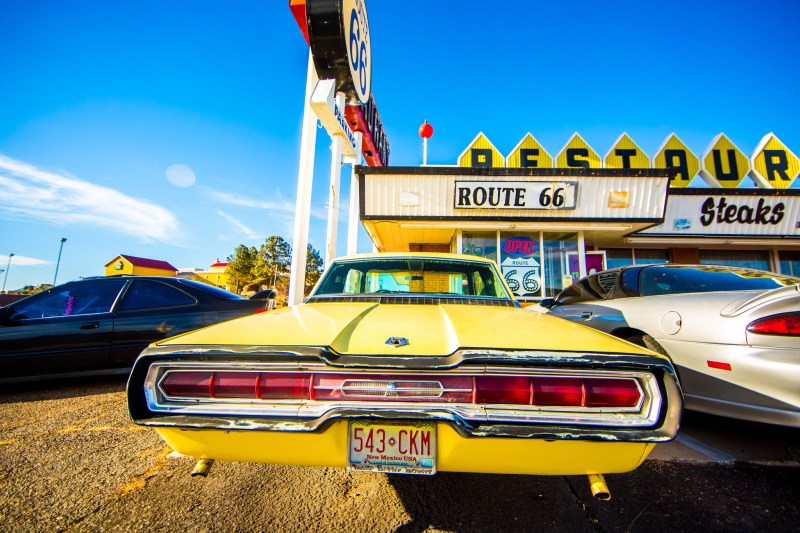 Is there a road trip list out there that doesn’t include Route 66? We hope not. Nicknamed “the mother road” by literary great John Steinbeck, this historic highway paved the path for what the cross-country road systems in America look like today. Stretching 2,451 miles from Chicago to Los Angeles, Route 66 was a symbol of opportunity, a way to economically connect the West and the East. It also helped hundreds of thousands of people escape the Dust Bowl in the 1930s—and you won’t want to miss retracing those who traversed the open road in decades past. Pull over at the Fantastic Caverns in Springfield, Illinois, to explore the underground and be sure to stop for frozen custard at Ted Drewes in St. Louis, Missouri. You also don’t want to miss the Rock Cafe in Stroud, Oklahoma, or Lucille’s Famous Route 66 Gas Station 120 miles west in tiny Hydro.

Once you’ve finally made it out West and you’re ready for a good night’s rest, lay your head at the Wigwoman Motel in Holbrook, Arizona. Open since 1929, the historic chain also has an 18-hole golf course, in case you want to drive a ball instead of a car. 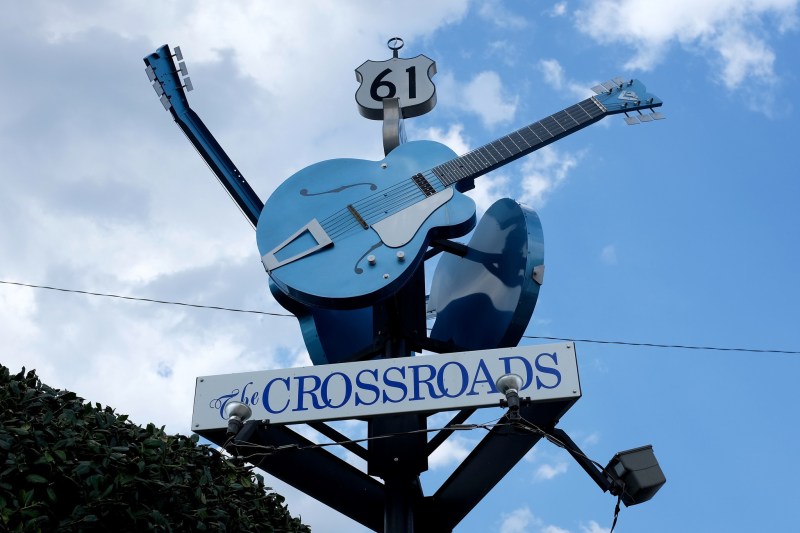 Cue up your favorite B.B. King and Muddy Waters records for this world-famous pilgrimage through gospel and soul country. From Memphis, Tennessee, all the way down to the Gulf Coat of Mississippi, this road trip will take you in and out of the recording studios, hotels, and blues clubs that helped craft the genre and send it mainstream.

To keep top of mind: Elvis Presley’s Heartbreak Hotel, the Stax Museum of American Soul Music, the Ground Zero Blues Club and, since we don’t want you to starve, Goldie’s Trail Bar-B-Que. We’d be remiss to leave New Orleans and the French Quarter off this list, of course, and we recommend you take this trip in the spring or fall, away from the heat and high hotel rates that come with summer. 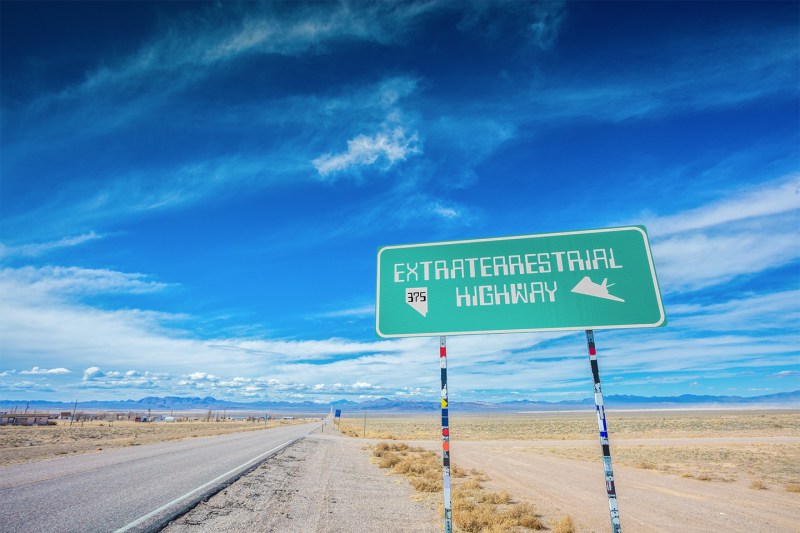 The ‘Extraterrestrial Highway’ close to Area 51 in Nevada USA. This famous road sign is usually covered in stickers from tourists who visit the area. (Getty)

There’s no stranger stretch of asphalt in America than the Extraterrestrial Highway. At 98 miles long, it runs through the Nevada desert, and the small towns and tiny inns you’ll find peppered along your way offer a charm and personality simply not found anywhere else in the country. Earthlings are welcome at the Little A’Le’Inn cafe in Rachel. And because the highway is far from any big cities and their unfortunate light pollution, the nighttime stargazing on this journey is truly other-worldly.

For those itching to catch a glimpse of Area 51, there’s exactly one way to do it legally: From the top of nearby Tikaboo Peak, which you’ll have to hike up to see. Come armed with flashlights if you’re trekking at night, and the steep hill takes about two hours to summit.

But whether you’re exploring at night or during the day, it’s vital to keep your eyes peeled at all times, since you never know who—or what—else you might spot on a road trip of their own.