As we speak, people in Germany are drinking beer. Of course, this could be said on any day, at any moment, in our Gregorian calendar.

But it is especially pertinent this week, as the world descends on Munich to celebrate the 207th anniversary of Oktoberfest.

So what is Oktoberfest? Aside from an excuse for grown men to wear lederhosen, play drinking games, and possibly wake up on the floor?

We recently paid our friends at Paulaner — one of six Bavarian breweries that adheres to the Reinheitsgebot (a set of German beer purity laws), and is thusly permitted to serve beer at Oktoberfest — to figure out exactly that.

Our consigliere in this endeavor? Marco Santomauro, current General Manager at Paulaner NYC and a 23-year veteran of the brewery’s Munich-based headquarters.

From food pairings to pouring techniques to why, exactly, those glass-handled steins are shaped the way they are, here’s what we learned from him.

(Nota bene: If you’re in NYC, be sure to check out Paulaner’s Oktoberfest programming, which features tons of deals on beer and food. They also offer keg service if you’re looking to host the festivities at home.)

There is but one official beer of Oktoberfest — the one that shares its name (also known as Märzen — “March” — the month in which it’s brewed).

But it’s not the only beer you need to know. Herein, a quick rundown of the other essential German styles, which tend to be less hoppy than their American cousins (“It’s more about drinking in volume,” says Santomauro). 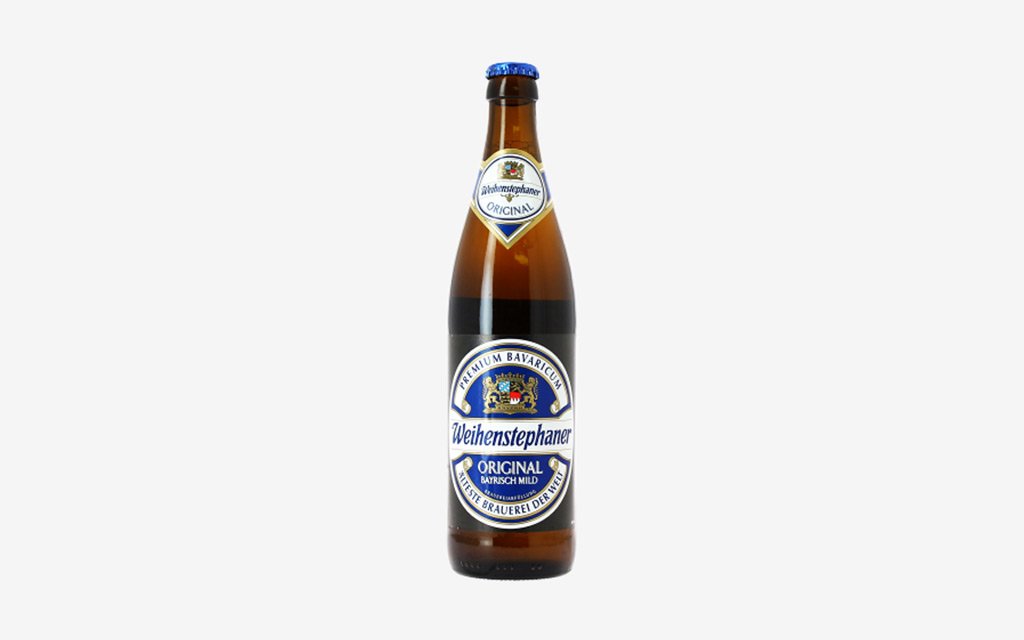 Lager (“to store,” as in beer) or Helles (“bright/pale”): Full-bodied and light in color with a low hop content, leading to a slightly sweet, less bitter flavor. 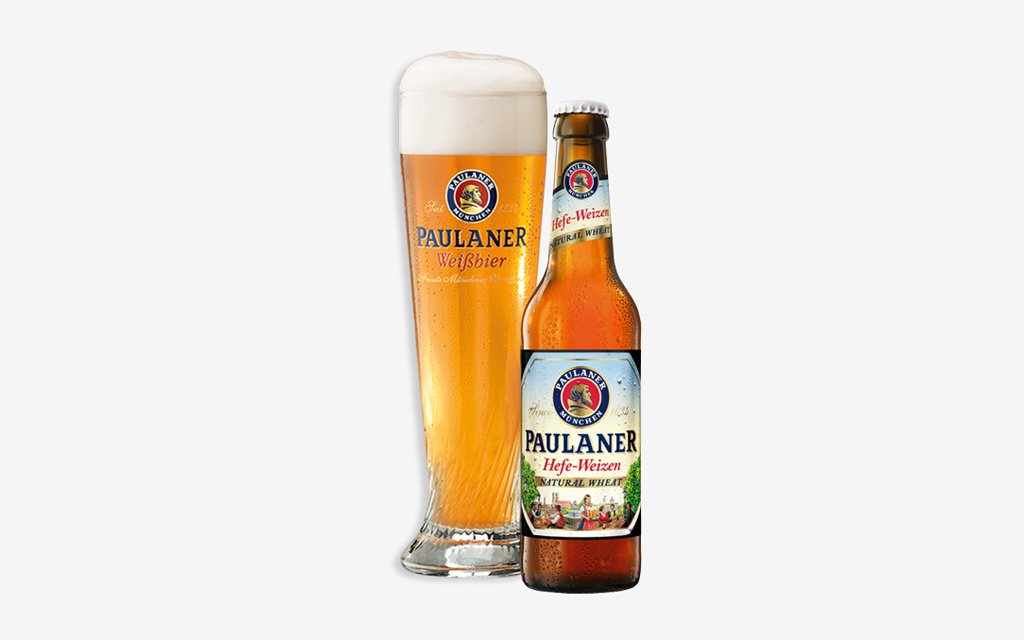 Hefeweizen (“yeast wheat”): An unfiltered, top-fermented beer brewed primarily with malted wheat (rather than barley) and special yeast that lends it notes of banana and clove. Cloudy in color. 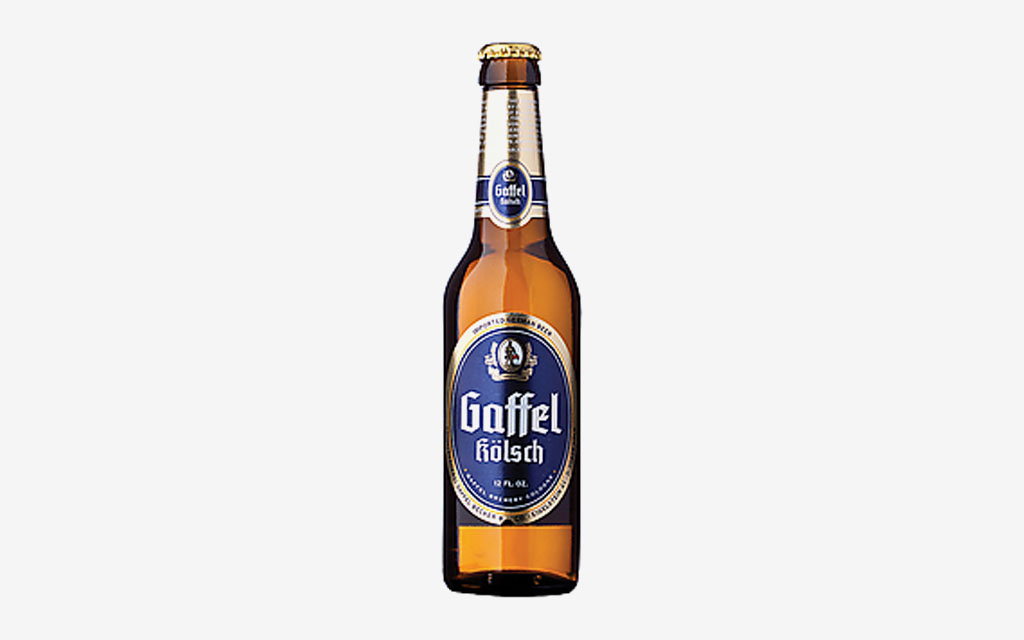 Kölsch (“of Cologne”): A clear, top-fermented, summer-friendly pilsner that’s light in body and color. Must be brewed within 50km of Cologne to officially bear the name. 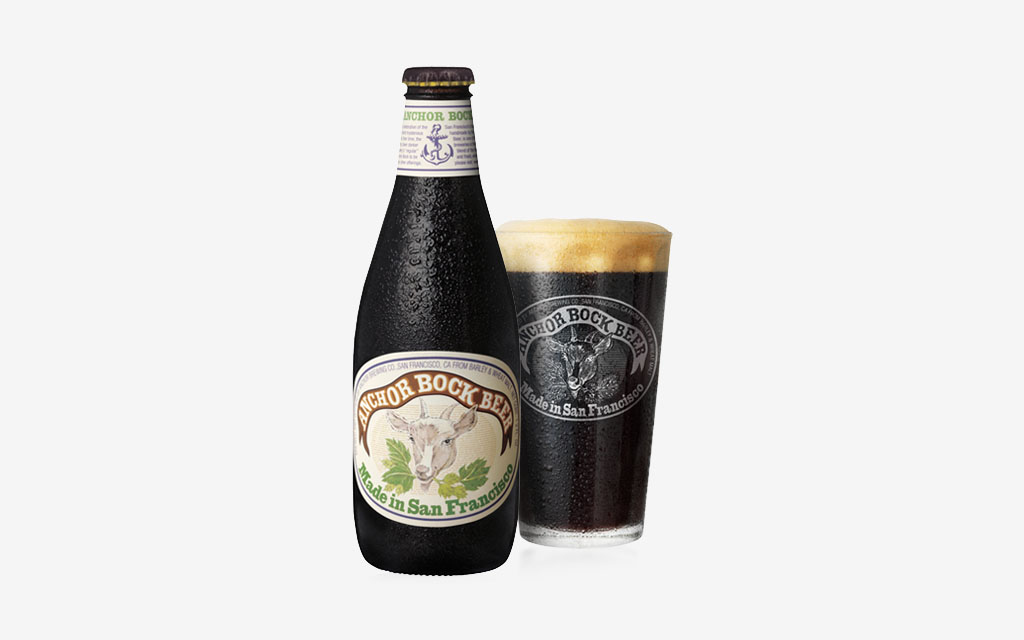 Bock (“of Einbeck”): A typically dark, strong lager (6.3-7.2% ABV) with notes of white bread. The name (ein Bock, meaning “billy goat”) is a malapropism of the town (Einbeck) where the style originated. 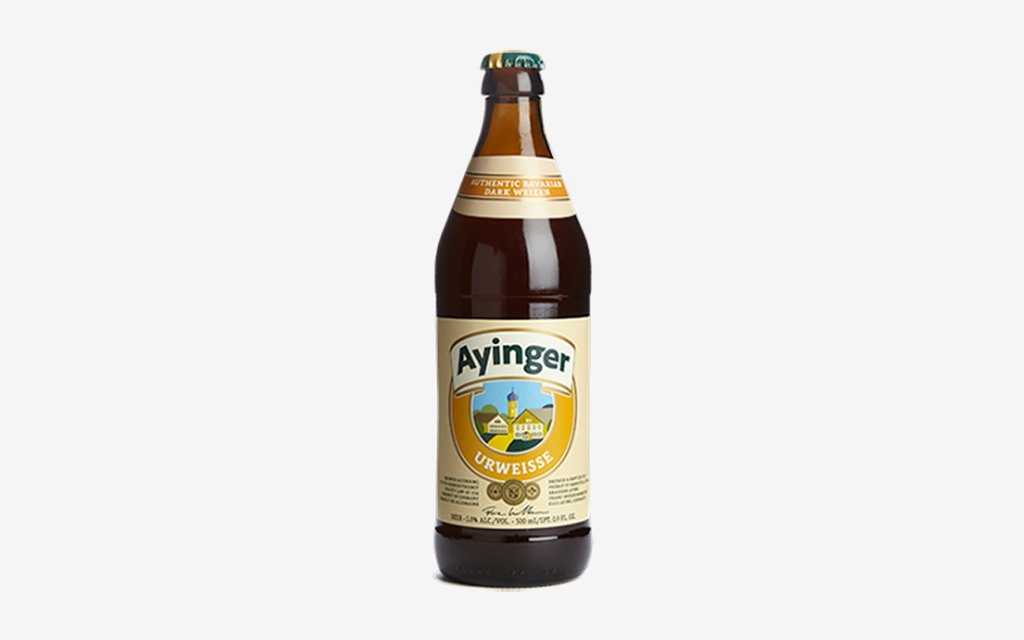 Dunkelweizen (“dark wheat”): A wheat beer brewed with darker malt (that means it’s been roasted longer). Think of it as a stronger hefeweizen, in both flavor and ABV. 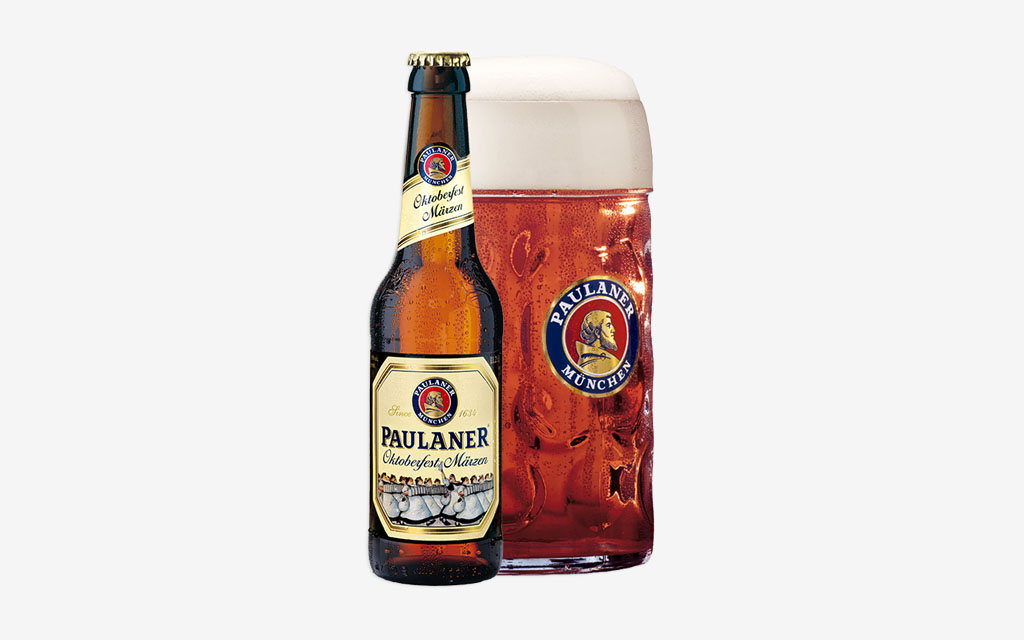 Oktoberfest/Märzen (“March”): A golden to dark brown, full-bodied lager brewed with more malt than traditional lagers (in the days before refrigeration, that gave it a longer shelf life), thus leading to a slightly higher ABV (5.5-6%).

ONLY A PIG DRINKS ALONE

You wouldn’t eat soup with a fork. Likewise, you don’t drink lager out of a weizen glass. Skim this quick primer on the science of German drinkware lest you make an ill-timed faux pas.

You’ll note a couple similarities throughout: 1) A “fill line” near the top of the glass that indicates a full, fair pour, and 2) A wide mouth opening, such that you can take in the full aroma of the beer while drinking it.

The Weizen Glass
What it looks like: Narrow at the bottom but wider at the top
What it’s for: All weissbiers (hefeweizens, dunkelweizens, etc.)
Why it looks like that: The shape allows the (typically high) carbonation of a wheat beer to filter up through the glass and distribute the yeast evenly.

The Maß
What it looks like: Pronounced “mass,” it’s a heavier, more voluminous (1 liter) version of a stange. The word itself represents a measurement for — you guessed it — beer.
What it’s for: Oktoberfest
Why it looks like that: More than 7.5 million liters of beer are served at Munich’s Oktoberfest each year. That’s enough to fill three Olympic swimming pools. To save servers time and legwork, these large-format glasses have become the standard.

The Schnitt
What it looks like: A miniature Weizen glass (Schnitt means “cut”)
What it’s for: Quaffing a schnitt, aka a complimentary pour of half beer, half foam that drinkers traditionally end the night with in Bavaria. The foam coats your stomach walls and absorbs into your bloodstream faster than liquid, giving you a strong but short-lived alcohol rush. “A schnitt always fits in there,” says Santomauro.
Why it looks like that: You try drinking a liter of foam.

The Giant Weizen Glass
What it looks like: The same dimensions and shape of a Weizen glass … scaled to 3L.
What it’s for: Bundesliga beer showers.
Why it looks like that: So you can drink — or douse an unwitting teammate in — an obscene amount of beer.

While every man thinks he knows how to pour the perfect beer, Marco Santomauro actually does. Watch this short instructional and you’ll be pulling taps like a true Bavarian in no time.

And remember the two traditional rules of German toasting:

1. Always look your companion in the eye (“Or you’ll have seven years of bad sex”), and 2. Always clink glasses at the bottom (“Women and beer: you touch at the bottom”).

YOU KNOW THAT YOU’RE OLD WHEN THE CANDLES COST MORE THAN THE CAKE.

All beer and no sustenance makes Hans a hungover boy. So we chatted with Thomas Slivovsky, Paulaner’s Viennese executive chef, about the best traditional German meals to pair with the beers you’ll be drinking at Oktoberfest.

Translation: Creamy camembert made with Hefeweizen, served with pickled red onions, pickles and a warm pretzel.
Pair with: Hefeweizen
Chef’s notes: “There’s a slight bitterness to the cheese that cuts nicely with a Hefeweizen. Serve at room temp with a nice crispy pretzel.”

Translation: A breaded veal cutlet served with potato salad, cucumber salad and lingonberry jam.
Pair with: Munich Lager
Chef’s notes: “Lager is a strong beer with nice carbonation, so it pairs well with a light schnitzel like ours. The breading doesn’t stick to the meat — it’s a perfect summer dish.”

Translation: Braised beef shoulder in a red wine and vinegar sauce, served with red cabbage and spaetzle.
Pair with: Dunkelweizen
Chef’s notes: “The dunkel has a malty, caramel flavor that works with this dish, cutting the acidity of the meat and the sourness of the sauce.”

Translation: A whole pork knuckle, or pig leg, served with a dark beer sauce and potatoes.
Pair with: Oktoberfest
Chef’s notes: “The Oktoberfest is a pretty strong beer with high alcohol. And pork and beer always go well together — the stronger, the better.”

LIFE IS WONDERFUL — YOU JUST NEED TO SEE IT THROUGH THE RIGHT GLASSES.

Can’t make it to Munich this year? Don’t sweat it. German roots run strong all over the U.S., and accordingly, you can find a solid Oktoberfest within driving distance of just about anywhere. Here are five of these best (along with some places to rest your head at night — you will not be driving home). 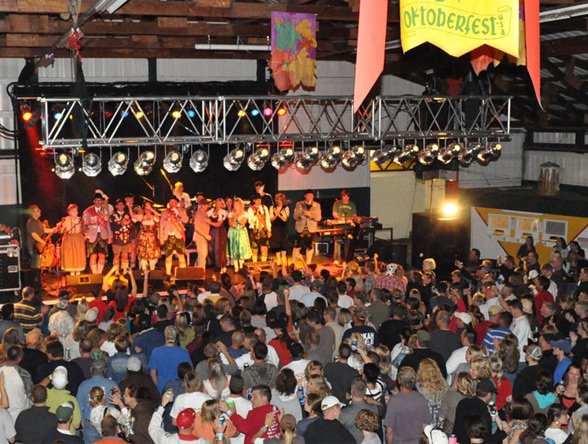 There’s a massive array of activities at “Oktoberfest USA,” including but not limited to a “Dachshund Dash” (with prizes going to the three fastest dogs), a Lederhosen Luncheon with pulled pork and brats, the Miss La Crosse Pageant and, of course parades, bands and sausage. Accommodations-wise, prices blow up over the weekend — a Courtyard comes in north of $440 — but given the options, our choice is the Charmant Hotel, which is well decorated and located smack in the middle of town. Just expect nightly rates about $300 over its average. 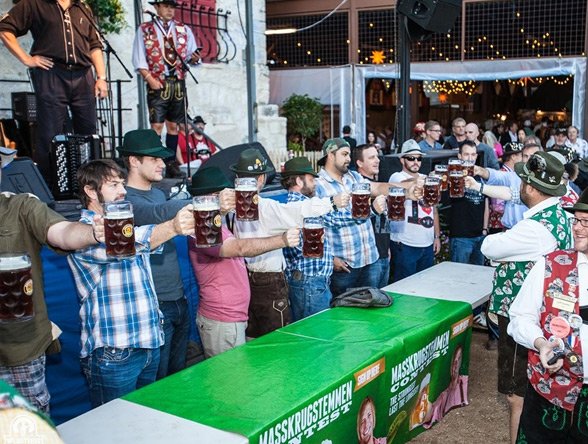 Nearly 20 percent of Texans have German ancestry, which might be why the state has the biggest, best collection of Oktoberfests in the country. Our picks? Go to AustOberfest (Sept. 30) if you only have a day to spare, for, among other events, “unlimited sausage tastings,” but you’ll want to head out to the super-Germanic Hill Country for a fuller experience. Wurstfest, in New Braunfels (Nov. 3-12), offers 10 dirndl-filled days of German bands, a biergarten and the wursthalle. 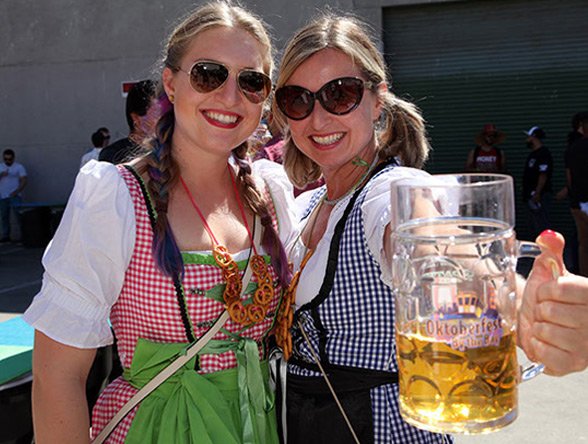 Set up on Pier 48, right next door to AT&T Park overlooking the San Francisco Bay, this might be the best-sited Oktoberfest in the country: water views plus “nonstop music, singing, dancing and the very best in German food and drink.” You’ll probably want to stay at a hotel closer to Market Street in SoMa; our pick is the new Hotel Zetta, part of the
Viceroy collection. 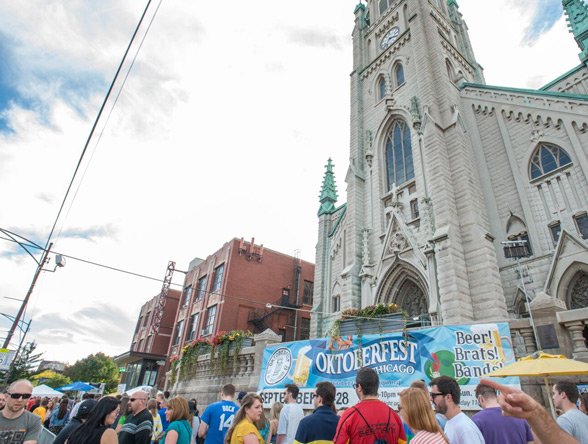 No American Oktoberfest takes its beer as seriously as Chicago’s, which offers a “Become a Brewmaster” package. Fact: You won’t learn much, but you will drink a lot, as the $150 package includes a commemorative one-liter beer stein (refillable at the 14-ounce price), four weekend passes, $30 of “Brewer Buck”, a two-for-one food deal and discounted entry to craft beer nights, featuring 40 artisanal varieties. (And pretzel necklaces for participants.) 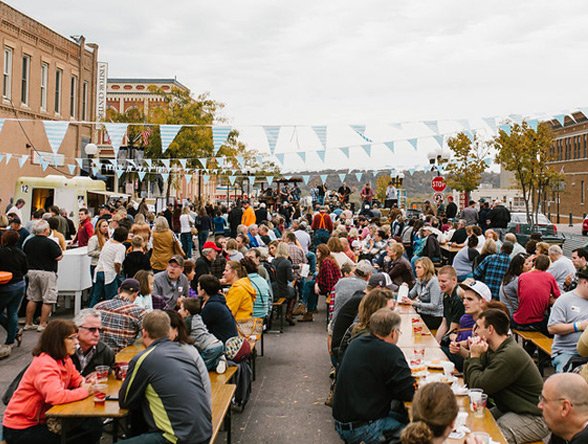 Home of Schell’s Brewery, New Ulm (about a two-hour drive southwest of Minneapolis) trades on its German identity all year round — Oktoberfest is just the apex, with tours (and tastings) at Schell’s, bands galore and a Wonderful Parade of German Things (originally the “Wunderbare Parade Deutscher Dinge”). Also of note: New Ulm is home to a vineyard — Morgan Creek — which’ll make for a change of pace when you’ve had all the bier you can stomach. There are only three hotels in New Ulm — and the Best Western, the fest’s HQ, is already sold out — so consider grabbing seven of your best friends and renting something like this nearby lakehouse.

Special thanks to Paulaner on Bowery