The Patriots tight end is hanging up his spikes after nine seasons in the league. 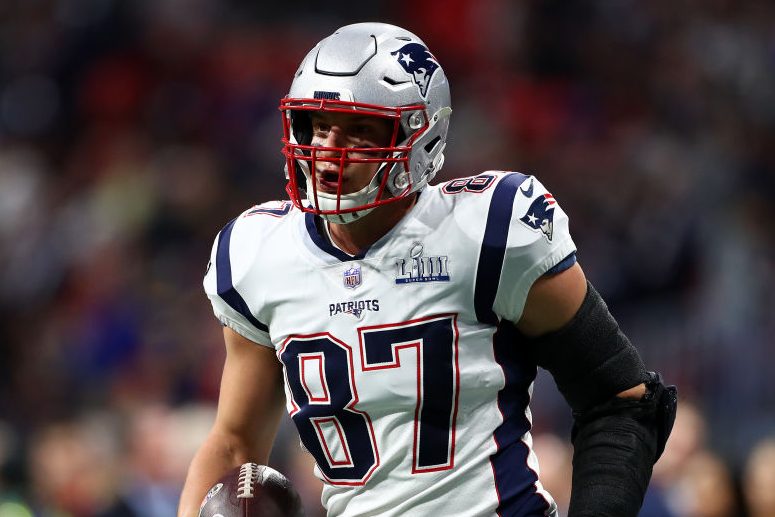 The next stop in Rob Gronkowski’s football career won’t be Super Bowl LIV in Miami, it’ll be Canton.

On Sunday night, the star Patriots tight end announced he would be retiring from the NFL following nine seasons in the league, ending a career that will surely make the 29-year-old a first-ballot Hall of Famer.

It all started at 20 years old on stage at the NFL draft when my dream came true, and now here I am about to turn 30 in a few months with a decision I feel is the biggest of my life so far. I will be retiring from the game of football today. I am so grateful for the opportunity that Mr. Kraft and Coach Belichick gave to me when drafting my silliness in 2010. My life experiences over the last 9 years have been amazing both on and off the field. The people I have meet, the relationships I have built, the championships I have been apart of, I just want to thank the whole New England Patriots organization for every opportunity I have been giving and learning the great values of life that I can apply to mine. Thank you to all of Pats Nation around the world for the incredible support since I have been apart of this 1st class organization. Thank you for everyone accepting who I am and the dedication I have put into my work to be the best player I could be. But now its time to move forward and move forward with a big smile knowing that the New England Patriots Organization, Pats Nation, and all my fans will be truly a big part of my heart for rest of my life. It was truly an incredible honor to play for such a great established organization and able to come in to continue and contribute to keep building success. To all my current and past teammates, thank you for making each team every year special to be apart of. I will truly miss you guys. Cheers to all who have been part of this journey, cheers to the past for the incredible memories, and a HUGE cheers to the uncertain of whats next.

A three-time Super Bowl champion, Gronkowski spent his entire career with New England and ends his tenure with 521 catches for 7,861 yards and 79 touchdowns in 115 games. His 79 touchdowns are the most in franchise history.

Following Gronkowski’s announcement, the tributes rolling in on social media – including one from the guy who tossed him those 79 TDs.

What an honor and privilege to play with you these past nine years @gronk! You accomplished so much and our team was almost unbeatable when you were on the field! Your fun-loving, inspiring, and positive energy made an impact on everybody you came into contact with! Not just that, but for as great as a player you are, you are a better teammate and person. The NFL was a better place with you in it! But I have no doubt you will be a success in anything you do!!! Love you pal!

“In the nine years that I have known Rob Gronkowski, I have never known him to have a bad day,” Patriots owner Robert Kraft said in a statement. “He always has a youthful exuberance about him and is a joy to be around.”

Many in the organization thought Gronkowski would be returning to the field, but it appears back, knee, ankle and arm injuries that have dogged him in recent years and limited his ability to stay on the field finally took their toll.

Gronkowski will also surely have a second career in entertainment as Gronk the character has always been as popular as Gronk the football player has been dominant.

His coach, Bill Belichick, is a man of few words but even he felt compelled to speak out on the star’s retirement.

“It was a pleasure and a privilege to coach Rob Gronkowski for the past nine years,” Belichick said in a statement. “From his rookie year until his final season and through countless times in between, Rob was a major reason why we won games and championships. His elite combination of size, skill, intelligence, toughness, and ability to perform in pressure situations set him apart.”

Writing About the Environment in the Era of Climate Change