The highest-paid player in the NFL thanks to a deal that was signed after he threw for 4,115 yards and 37 touchdowns last season and helped Green Bay lock up the NFC’s No. 1 seed, Aaron Rodgers entered this season hoping to win his third straight MVP award and fifth overall.

That is not going to happen, as the 39-year-old is not in the running for capturing an MVP award and barely has Green Bay in contention for a playoff spot in the NFC with a 5-8 record. Rodgers is probably upset about missing out on the postseason, but he may be even more disturbed about missing out on the chance of winning MVP for the fifth time, which would tie Peyton Manning for the most in league history.

Rodgers, who has previously complained about losing out on the 2012 MVP that was won by Adrian Peterson and was also miffed he “didn’t get a sniff” in the voting for the 2016 award, clearly cares about being recognized for his greatness. “There’s not many guys that have won three, so that would definitely mean a lot,” he said in 2020 about the prospect of winning a third MVP. “I think it should live up to what it stands for as an acronym. It’s that person who is most valuable to their team. I feel like that’s why I should be in the competition most years, and this year especially. It’s nice to be back in the conversation.” 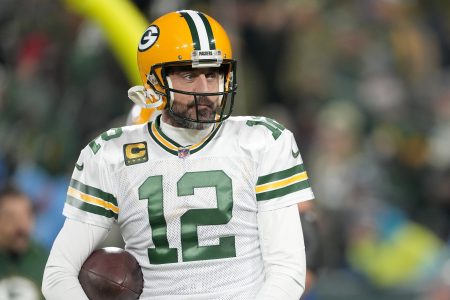 Rodgers is out of that conversation (and will likely need some ayahuasca to help him process), but another former MVP winner who has as many Super Bowl wins as the longtime Packer quarterback (one) is squarely in it. The difference between Patrick Mahomes and Rodgers is that the Kansas City Chiefs star is far more concerned with winning Super Bowls than winning MVP awards.

“I honestly don’t care,” Mahomes told ProFootbalTalk after Sunday’s overtime win in Houston. “As long as we win the Super Bowl, it won’t matter to me. I just try to go out there and compete. I’ve won an MVP and I won a Super Bowl and a Super Bowl is a lot better.”