Voyages north aren’t what they used to be 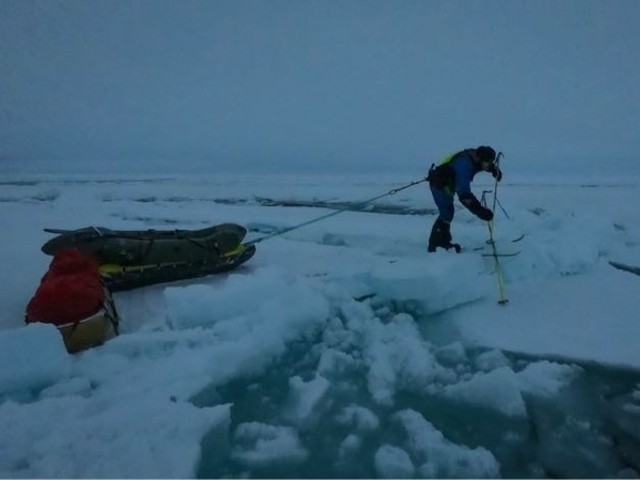 One of explorer Mike Horn's images of his travels in the Arctic.
Mike Horn/Instagram
By Tobias Carroll / November 25, 2019 6:18 am

When you think of Arctic explorers, what comes to mind? It’s likely you’re thinking of a band of brave and hardy souls, garbed for freezing cold weather and battling the elements. It’s an archetypal image with plenty of history to back it up. But a pair of explorers venturing through the Arctic en route to the North Pole are currently grappling with a very different side of unruly weather — and it’s something that bodes ominously for the planet.

At The Guardian, Simon Murphy has the story of two men, Mike Horn and Borge Ousland, who are presently attempting to cross the Arctic Ocean using skis. It’s usually frozen to a point where it can be skied across at this time of year — only right now, it isn’t. As Murphy explains, “they have been slowed by the thinning ice, which has been credited to climate change.”

Making matters even more alarming? According to the article, they only have 12 more days worth of food. The duo set out from Alaska in late August, and began making their way on skis on September 12.

In this photo, we can see thin crushed-up ice. In all of our polar expeditions, @BorgeOusland and I have never seen ice like this so far up north. We are now at the latitude of 88 degrees north, just over 200km from the North Pole, and should therefore be on solid ice by now. It looks like there is no more solid ice left in the Arctic Ocean…We still have a couple months left on the ice to come to this conclusion, but so far, it is not looking very promising. It is sad to see how this beautiful and hostile region has changed from our previous North Pole expedition in 2006 in comparison to today…It has only been 13 years, and we do not recognise the Arctic Ocean at all! #NorthPole #Pole2Pole #NorthPoleCrossing #MikeHorn

According to The Guardian, Horn and Ousland remain confident that they’ll reach their destination in the time they’ve allotted. The obstacles they’ve faced offer a decidedly tactile example of the havoc climate change has had on the world.