Review: How I Learned to Stop Worrying and Love the Mercedes G-Wagen

It probably didn't hurt that I was driving one through the Scottish Highlands, but whatever 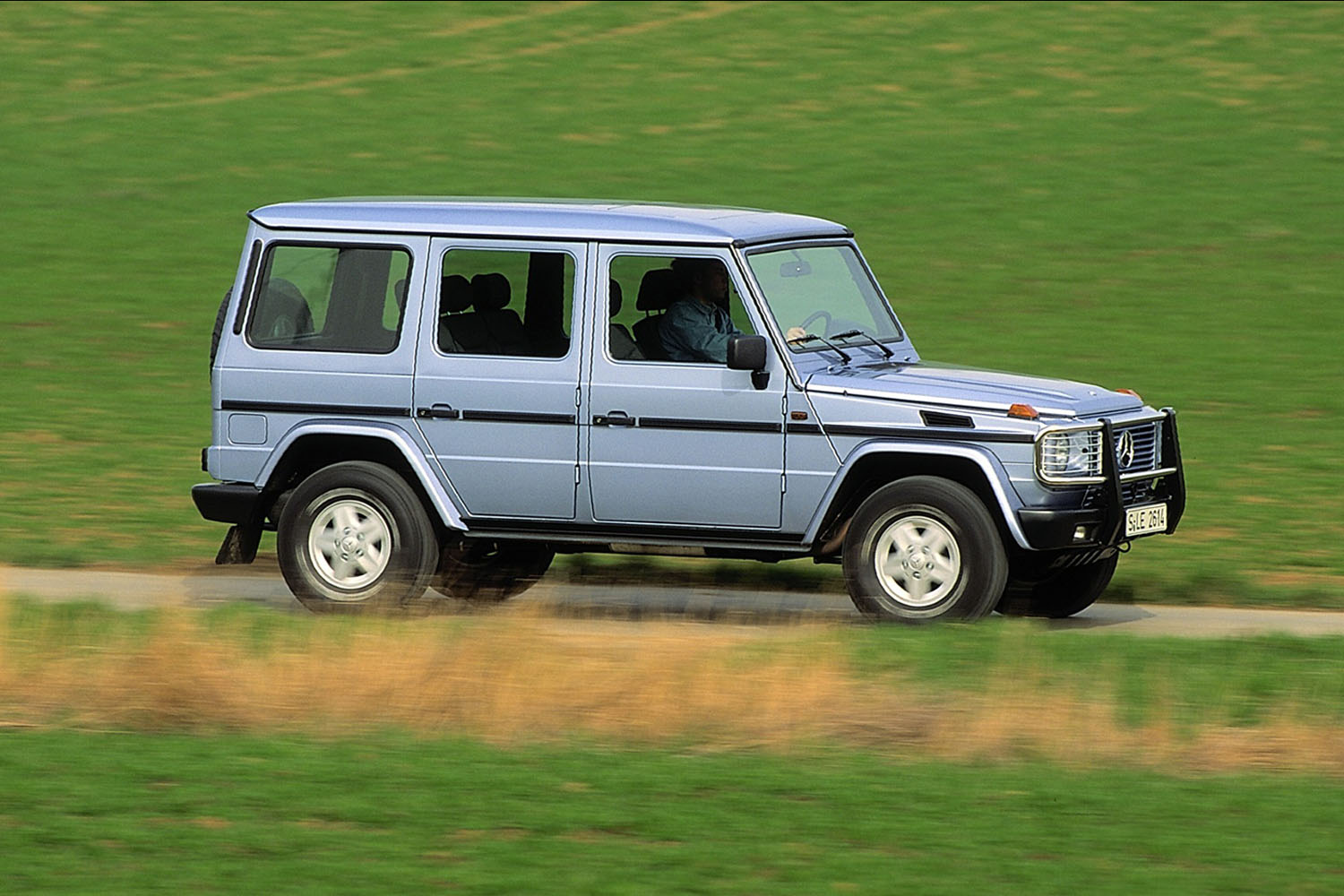 The road from Cadboll to Dornoch in the Scottish Highlands is a scant 18-mile trip that features subtle bends and mostly reasonable speed limits. It is typically not an unpleasant 25-minute drive. But sandwiched behind a flailing cargo truck and a small Peugeot chomping at the bit to pass us both, it’s a less than happy motoring experience.

On this weirdly radiant October morning, I’m in no particular hurry. I have more than an hour before my tee time at Royal Dornoch, but I can feel the Peugeot driver inching closer to my bumper and I loathe tailgating. It’s a pointless and despicable habit that causes traffic jams, and worse, accidents. So, predictably, as we round on to the bridge to cross the Dornoch Firth, the struggling lorry pulls on to the shoulder and the French sedan begins to overtake me on the right. But this silly stranger has failed to imagine my capacity for petty behavior. As the driver reaches my tailpipe, I pound the accelerator to the floor, entreating all 577 horses to scream in thunderous V-8 ecstasy. After about a second and a half, he’s reduced to all but a speck, signaling a middling return to the left lane. I back off the throttle and giggle like the immature asshole the Peugeot driver is undoubtedly calling me. Before I reach the end of the bridge, my synapses fire toward the realization that damnit, I think I’ve fallen for a G-Wagen — a car I’ve never loved or even liked, for that matter.

Truth be told, the Mercedes-Benz G63 AMG I’m driving is, of course, not really a car. It is in reality a ludicrously speedy utility vehicle, and after several days whipping the 2020 model around Scotland, I now want to take it home. (Spoiler: They didn’t let me.)

Before this gorgeous week in the Scottish highlands, the Geländewagen was simply not a vehicle that spoke to me on much of any level. To my mind it was a boxy anachronism created in the late 1970s for the German and other militaries, now fit for professional athletes, Russian oil magnates and the odd Kardashian. Why normal people would need or want one was beyond me. Of course it has renowned off-roading chops and the 2020 variety is outfitted with many of the luxe features you would expect to find in a $150k whip: adaptive cruise control, lane assist, wifi, state-of-the-art infotainment, heated and cooled seating upholstered in fine leather. But you can get those same bells and whistles in the GL series, which has better cargo space, third-row seating and a more supple ride, making it a better fit for most well-heeled Mercedes-Benz customers.

A few years back, I was chatting with a Mercedes-Benz executive who was a bit incredulous over my lack of appreciation for their classic design. I told him I’d love to have one if I could get someone to chop the top and convert it to electric. It would make a great beach car, perfect for hauling surfboards. The exec looked at me like I’d just told him I wanted to draw a mustache on the Mona Lisa. So we migrated the topic of conversation back to Formula 1, where we found more common ground.

On landing in Scotland, I wasn’t sure the G-Wagen was fully going to work on this trip and felt a little unenthusiastic about spending so much time behind the hulking behemoth’s wheel. Seven days and eight planned rounds of golf for four forty-something-year-old men requires a heavy gear load: four sets of golf clubs and their respective travel cases, luggage, camera bags, laptops and a drone. While the G-Wagen does offer decent cargo space, the wheel wells in the back encroach quite a bit, and with much of our load non-malleable, I wasn’t sure it would all fit. But thanks to years on a controller honing our Tetris skills, we managed to get everything and everyone in without much discomfort and a bit of leg room to spare. G-Wagen for the win.

Behind the wheel, my prejudices were quickly parked. For a nearly 6,000-lb. vehicle, the G63 feels quite nimble in action. Sure it still has the parking-lot turning radius of a double-decker bus, but at speed it’s responsive and much easier to manage than I had imagined. While the Bi-turbo V8 is a thirsty beast (13 mpg city; 15 mpg highway), it wasn’t as brutal at the pump as I expected. We went through about two and a half tanks of gas over roughly 900 miles.

Beyond performance, I was mildly concerned about attracting negative attention, an invisible cost to driving a posh car. But hardly anyone took much notice with the exception of unloading luggage in front of the Balmoral Hotel in heart of Edinburgh, where we looked so ridiculous and disorganized we should have been ridiculed right on to the next flight home. All in all, the G-Wagen actually makes for a damn-fine touring vehicle, but that’s not why I’m smitten.

Back at the end of the bridge across the Dornoch Firth, the jolt of speed fired up a bit of an adrenaline-induced epiphany. The reason I’m starting to fall for this G-Wagen is not for its batshit power or stunningly appointed interior, though they’re very, very nice. It’s because of what it’s not: generic. The iconic, unmistakeable stack-of-boxes design looks like nothing else currently on the road. The 40-year, nearly unchanged aesthetic says “I am who I am,” and that visual stasis allows the G-Wagen to stand apart in a category where it can be hard to differentiate between models and brands.

Modern sport utility vehicles seem to look more and more alike with every production year. As a former city mouse turned suburban rat, I see too many SUVs a day to count. Hell, I drive one every day and it’s getting harder and harder to differentiate it from the herd. At least twice, someone has parked next to me, a car the same size and color as mine (yes, it was at Whole Foods), and I tried to get into theirs. That’s something not likely to happen to a G-Wagen owner… unless they’re parked in the players lot at the Staples Center before a Kings game.

The other thing about contemporary SUVs is that they are basically just an intoxicating self-delusion for all of us who swore we would never own a minivan. But in reality, that’s what we are driving: slightly elevated all-wheel-drive minivans sans sliding doors. That’s what I drive day to day, because “never a minivan’”was a promise I made in derision of my ‘80s youth. The G-Wagen’s stacked, right-angle design stands in contrast to the flocks of vehicular turds that ooze their way down the suburban roads and byways. The German beast is many things, but a minivan it ain’t.

A few months later, home in New Jersey watching automotive mundanity roll on, I found myself with pangs of obsession when a knowing editor set up a meeting for me with Expedition Motor Company, a local outfit that takes early to mid-’90s surplus German military vehicles, all from the two-door “Wolf” variant, and refurbishes customizations. According to company founder Alex Levin, each vehicle gets more than 1,000 man hours of love before being returned to the road. The results are stunning. EMC gives their builds a few modern upgrades — like a sound system and headlamps — but the overall feel is vintage. The Wolves have a removable soft top, a five-speed manual transmission (for those of us who miss shifting gears) and a 250GD diesel motor that, while nowhere near as powered-up as the G63, gets around 20 mpg. Not bad. And a G-Wagen with no top, well, that’s half the dream.

After taking one of EMC’s creations for a test drive, Levin and I had a chat over coffee about the right-angle beauty of the Geländewagen and the customization process. I asked him what’s the craziest request he’s received to date. He immediately said, “To make it electric.” My heart sank, but of course, you can’t have everything.

As we sipped our coffee, looking out 1990 Rubellite Red Wolf sitting in front of my garage, Levin said, “It looks at home in your driveway.” I couldn’t disagree.

Take 50% Off Button-Downs and More Warm- Weather Wear at J.Crew

Oakley Sunglasses Are $65 Off at Dick's Sporting Goods

A rare flash sale on the best in the biz