Visit This Eastwood-Inspired Whiskey Hotel for Your Next Trip West 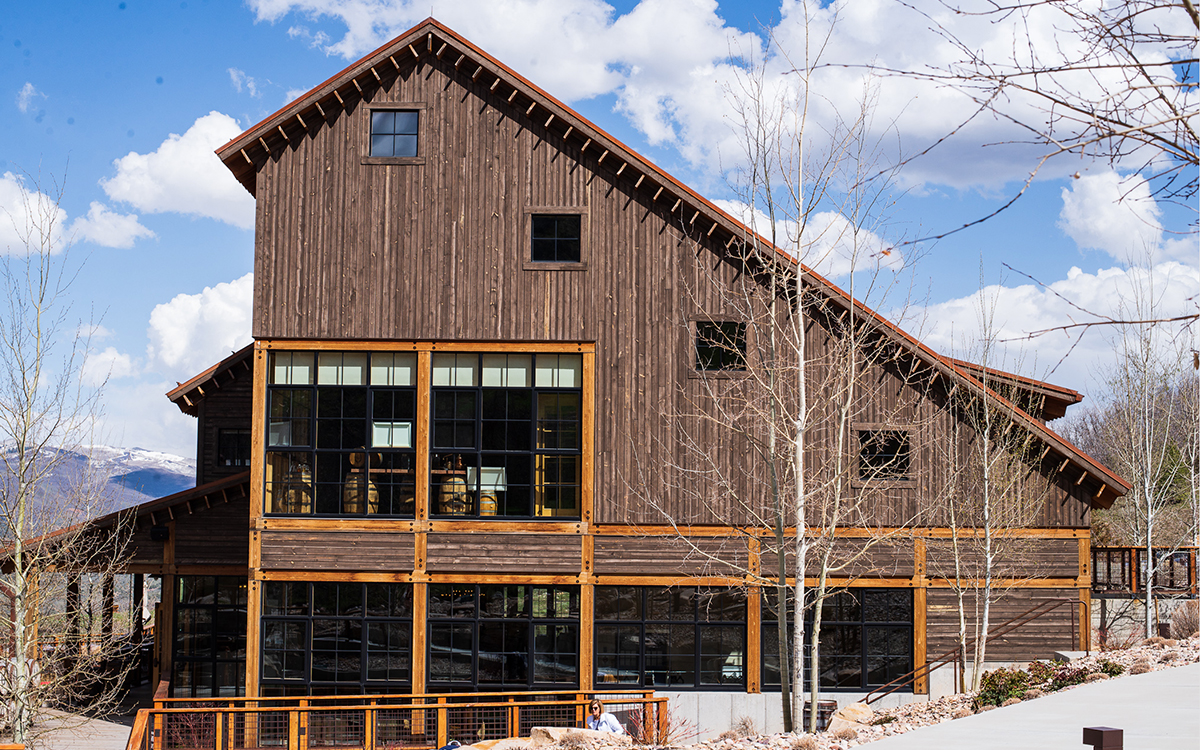 A look at the High West distillery tasting room on Blue Sky Ranch. (Diana Crandall for InsideHook)
By Diana Crandall / May 31, 2019 5:46 am

But we wanted to know if the actual product in the bottle stands up to all the mythbuilding, so we recently rendezvoused with High West marketing director Justin Lew for a private tour of the facilities — which are conveniently located on the premises of Blue Sky Ranch, a private 3,500-acre property with a luxury lodge that opened earlier this month.

Let’s get the obvious out of the way: Utah is a strange place for a booze company to put down roots. Most outsiders know the state best as home to the teetotaling Church of Jesus Christ of Latter-Day Saints, and its Byzantine liquor laws aren’t exactly welcoming to intrepid whiskey makers.

But Lew informed us it was Utah who cast the 36th linchpin vote to end Prohibition in the U.S., and we had no trouble kicking back inside High West Distillery at the Blue Sky Ranch and reflecting on all there is to love about Utah. The skiing is world class, the opportunity to off-road is abundant, and Robert Redford thinks it’s cool enough that he bought some land, built a private resort and started the country’s buzziest film festival there.

Before planning your late summer, fall or winter trips, picture this: you fly into Salt Lake City and drive 30 minutes or so through dramatic mountains thick with all manner of conifer and grazing elk scattered in the distance. As you pull up to the estate’s entrance, there are free-roaming horses tucked safely behind wooden fences, but available for a ride should that be on your agenda.

The distillery itself, just a short drive from the gate, is a work of art. Comprising two buildings — one with giant glass panes that allow viewers to see where they make whiskey, the other with a wood-cabin vibe where they’ll guide you through a tasting — the distillery is rustic, welcoming and elevated. Barrels of High West whiskey adorn the walkway up to the entrance, and beyond those, you’ll enjoy panoramic views of the surrounding Uinta Mountains.

Inside, you’ll find historic and unique products lining the wall, like an antique bottle of Duffy’s Malt Whiskey. It isn’t just a decoration, either — it’s a family heirloom. High West cofounder Jane Perkins is the great-great-granddaughter of Walter B. Duffy, a prominent booze man himself at the turn of the 20th century.

Of course, we haven’t touched on the most important part: the whiskey itself. We tasted five different samples, ranging from a straight, spicy bourbon called American Prairie to Campfire, a smoky, shoe-leather blend of scotch, bourbon and rye. The delicious limited-release Bourye, a blend of bourbon and rye whiskeys, was our favorite, and High West recommends you enjoy it without ice and beside a fire, with the Milky Way blazing overhead.

When you’re finished getting your fill, you don’t have to go far for your accommodations. The Lodge at Blue Sky Ranch boasts 46 rooms and suites that run the gamut of Western luxury. The Earth House has 22 suites with grass-roofs that appear to grow directly out of the hill side and features outdoor rainwater showers, while the Creek House, which is adults only, features indoor fireplaces, high ceilings and the Alexander Creek house right outside the door. And don’t worry about packing your rod and bait — a reservation at the Creek House comes equipped with fishing rods and custom tackle boxes.

While the distillery is open to the public, there’s a slew of other activities on the ranch that only patrons of Blue Sky can access. In addition to horseback riding and lessons, guest can also work cattle, fly fish, shoot clays, hike, bike and cross-country ski. In the summer, heli-fishing, heli-hiking and heli-mountain biking are available, and in the winter, heli-sking, heli-snowboarding are a must. Families have their own itineraries to build, with excursions specifically designed for kids of all ages. Think farm days, treasure hunts and wildlife education.

Learn more about bookings here (the Lodge) and here (the distillery), and most importantly, enjoy your stay.