Better sleep is coming to an airline near you 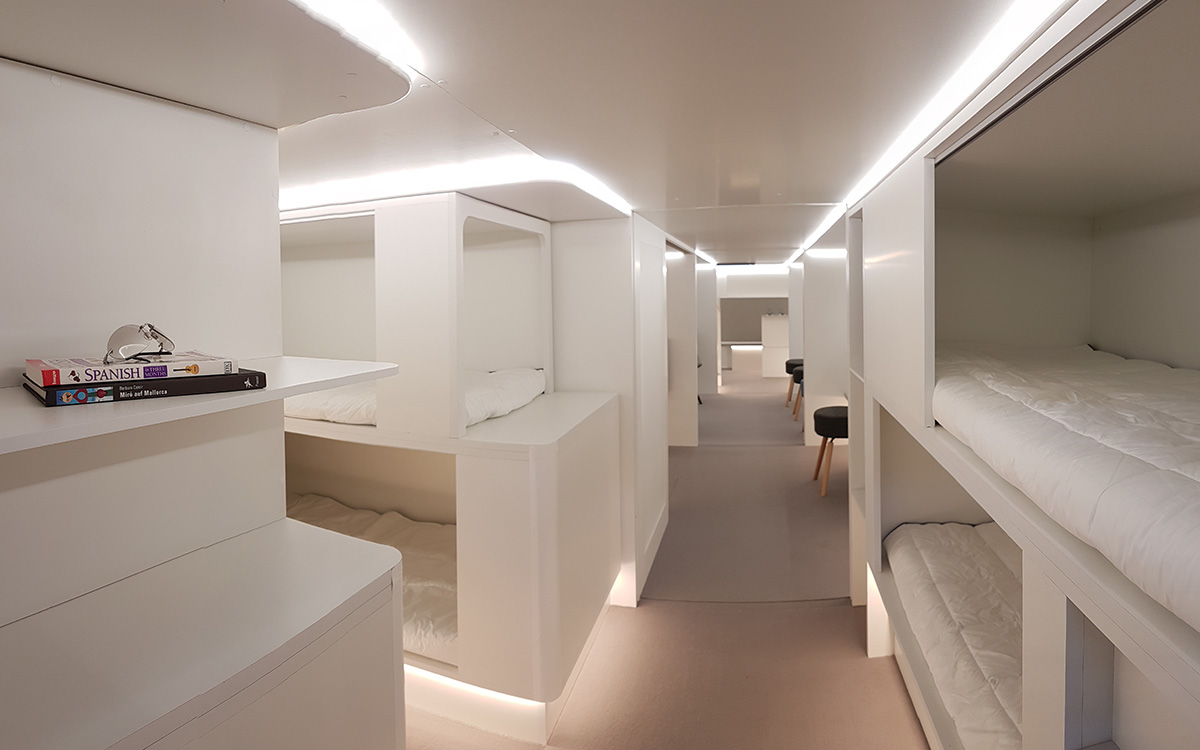 I envy plane sleepers. The ability to conk out on demand seven miles high in the sky is an everyday superpower. I certainly can’t do it — melatonin, alcohol and eye mask be damned.

The seats are too narrow. Those food carts come storming the hallway every 15 minutes, and, sue me, I don’t really believe in neck pillows. Apparently, I’m not alone. A quick “Can you sleep on planes?” straw poll of the editorial room here split us down the middle, and Expedia’s 2014 Airplane Etiquette Study found 48% of Americans cannot generally sleep on planes.

Good news, though, for both my colleagues and the rest of America: better sleep is the future of air travel.

Catching Zs was a theme at this year’s Crystal Cabin Awards, an international conference that spotlights the airline industry’s best products and concepts. Of the eight big winners, four presented designs that will make it easier for air travelers to fall asleep.

It isn’t too surprising that aircraft innovators have set their sights on better sleep. Last year saw the launch of the longest airline route ever (Singapore to Newark, NJ: 18 hours, 25 minutes long) on a plane called the Airbus A350-900ULR. “ULR” stands for ultra-long-haul, and means the jet can fly nearly 2,000 miles farther than a typical Airbus A350-900.

Airbus, in fact, was one of the four winners at Crystal Cabin. The aerospace corporation collaborated with French company Safran on “Lower Deck Pax Experience Modules” (in plainspeak, sleep pods), which can be inserted in the cargo cabin of an airplane. Passengers who pay a premium on their economy ticket could head below deck and catch up on shuteye in a dark, temperature-controlled environment with pillows and enough room to actually stretch their legs out.

This raises some immediate questions. Is there enough room for the jet to take on its usual volume of luggage? Could planes transporting pets reasonably claim a quiet sleeping environment? What sort of security might need to be implemented to ensure the safety of sleeping passengers? Will it be claustrophobic down there? And how did no one think of this until now?

Many of these questions will have to be addressed if and when the design is implemented, which will likely take years. Perhaps designated “sleep-jets” will simply board fewer passengers, or luggage requirements will become more restrictive.

Of course, Airbus’s concept wasn’t the only rest-inspired development at the Crystal Cabin Awards. Elsewhere, a German manufacturer re-imagined the Economy Class seat for long-haul flights, adding neck support and cushioning the seat. Hong Kong studio Paperclip Design presented a First Class suite concept that allows the cabins to be reconfigured based on the needs of the passengers (think bunk beds). And Air New Zealand unveiled its a new Skycouch for toddlers and infants: economy seats that fold out into a bed surface with seat belts, allowing tykes to sleep safely.

We’d be content with any number of these concepts becoming a reality; it could get pricey, though, considering exit-row seats are already pushing $120.

For more information on developments at Crystal Cabin, head here. Better air travel sleep is coming, friends. Until then, make do with your neck pillows.