It’s like a Hallmark movie set, with a brand-new art museum

Do you like excessive fall colors? Big 10 football? A superlative new art museum with a genuinely staggering Jackson Pollock? Gaggles of writers, some of whom will definitely go on to publish very famous books? You can find all this in a pretty little riverside town: Iowa City. If you haven’t been — or if you’ve only ever seen it from the window of a car headed to points west on I-80 — it may very well be time to book a weekend there, the home of the University of Iowa, the world-famous Iowa Writers’ Workshop and the Iowa Hawkeyes football team (3-3 at the moment, but with some big games yet to come). Here’s how to make the most of it.

How to Get to Iowa City

You’ll want to drive — it’s an easy, if enervating, three-ish-hour drive from Chicago on I-80. In a pinch, you can take Greyhound, but it’ll add an extra hour or so. If you have miles to burn, United and American fly from O’Hare into Cedar Rapids — you could Uber into town from there, and do the rest of this trip by foot, though it’ll limit your dining options.

What to See in Iowa City

Iowa City is never more alive than on an autumn Saturday when the Hawkeyes are playing at home. (This is no less true during a season inspiring headlines like “Iowa may have accomplished the unthinkable: Spencer Petras, offense might have gotten worse”). This season has two more home games: 10/29, against Northwestern, and 11/12, versus Wisconsin.

Maybe you don’t feel like jamming onto a bleacher at Kinnick Stadium. In that case, make a beeline for the newly reopened — and truly terrific — Stanley Museum, which showcases works spirited to safety during the 2008 flood of the Iowa River, which bisects the campus. Here you’ll find a staggering Jackson Pollock (“Mural,” until recently on a 14-venue world tour), work by Joan Mitchell and Yayoi Kusama, a ceramics collection that endorses the ongoing excellence of the school’s ceramics department, and multiple pieces by Grant Wood, the iconic “farmer painter” and UIowa painting instructor.

If you’re looking for writers, bookmark the upcoming events pages at Prairie Lights, the International Writers Program and the Englert Theater, which holds talks with big-name authors in addition to musical acts like Lucy Dacus and Lucinda Williams.

Where to Stay in Iowa City

Downtown Iowa City has no shortage of mid-tier corporate offerings: However you’re accumulating your Hilton points, you’ll find something that works, from the Hotel Chauncey (better known by its formal name, Hotel Chauncey, Tapestry Collection by Hilton) to the Hilton Garden Inn. Remarkably, each of those has something legit to recommend it: Hotel Chauncey shares a building with the excellent, non-profit Film Scene, while the Hilton Garden Inn has an actually quite good rooftop restaurant/lounge, Vue Rooftop, from which you can see the whole of the city, including its regional airport. (Looks better than it sounds). For a more personalized experience, there’s plenty of private rentals — look for a 1920s house or bed and breakfast in the city’s leafy Northside, never better than right now — when every cobblestoned street looks like the set of a Hallmark movie — or blooming season in the spring. 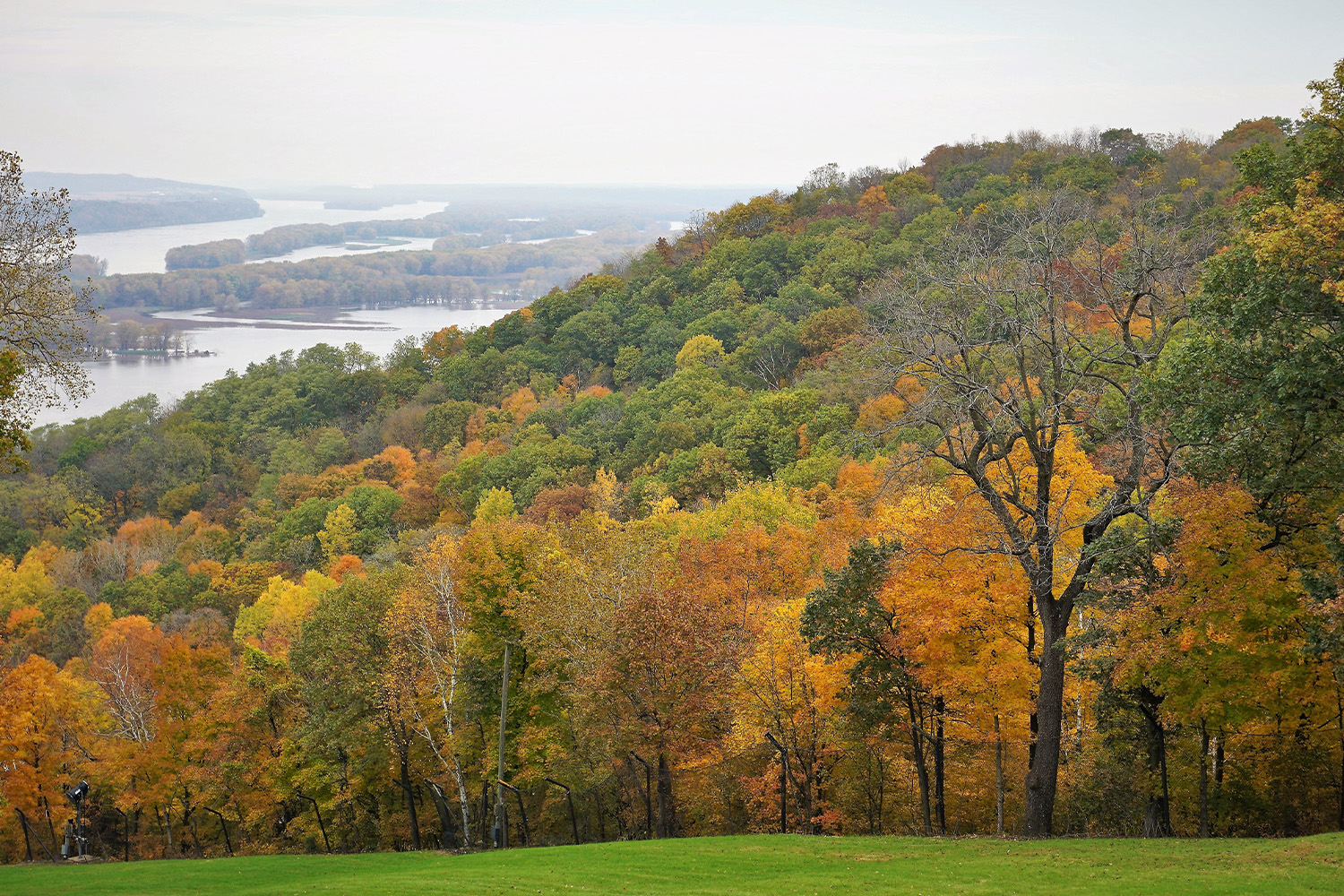 Get some fall color in your system with these weekend getaways

Where to Eat in Iowa City

Maybe don’t? Maybe cook? Maybe bring food from wherever you’re coming from? IC has lots going for it, but a vibrant five-star dining scene is as yet not among them. For cheap ‘n’ cheerful, try Oasis Falafel, on a pedestrianized section of N. Linn Street. Across the street, Brix has an admirable selection of wine and cheese. If you are cooking, try the Bread Garden Market for fancy (if not inexpensive) supplies. And if you have a car, it’s worth the trek out to Wilson’s Orchard for dinner at Wilson’s Ciderhouse, set in a beautiful salvaged barn — expect hearty mains like grilled Berkshire pork secreto with crawfish waffle, Grimm Farm roasted chicken with garlic chevre toast or tamari and agave roasted tofu with local vegetables. And on your way out of town, swing by Hurts Donuts in neighboring Coralville for a half-dozen glazed doughnuts to go.