Matt Hranek and Jake Mueser consumed a lot of gin, Campari and sweet vermouth to come up with fall's best new pattern

Stop me if you’ve heard this one: an English cloth merchant and an American magazine editor walk into an Italian bar. More than 600 Negronis later (not a misprint; that’s nearly five gallons each of gin, Campari and sweet vermouth) and the result was the greatest meeting of booze and menswear since George IV flung a glass of claret at Beau Brummell.

Thus the not-so-humble origin story of the Negroni Tweed, a heavy check-pattern textile woven in the West of England by Fox Brothers, a cloth company founded in 1772 and most famous for their sumptuous flannels. Matt Hranek, Editor-in-Chief of the WM Brown Project magazine, was celebrating the publication of the first issue at Harry’s Bar in Florence, the city where the Negroni cocktail was invented (some say in 1919, making this the drink’s centennial,) during the annual Pitti Uomo menswear trade show/spectacle. The Negroni ranks high among Hranek’s enthusiasms, challenged only by Land Rovers, Barbour Jackets and good cuts of meat. At the time of the party, he was hatching his next loving homage to the drink.

“I had this fantasy about building a portable Negroni trunk; a portable bar,” explains Hranek, “I had seen a company that was making these drink trunks: champagne and whiskey trunks handmade in really beautiful saddle leather. They even did hookah trunks for Arab sheiks. But I didn’t want to do it in leather, I wanted to do it in tweed, because I wanted it to feel slightly more rugged but elegant. Handsome enough to keep in your office but cool enough to throw in the back of your Land Rover.”

Hranek approached his friend Douglas Cordeaux, managing director of Fox Brothers and fellow Negroni-tippler to ask if he happened to have any extra tweed remnants lying around for his trunk prototype.

“I said why don’t we just design something exclusively for you?,” says Cordeaux.

Fox Brother’s designers went back into their impressive historical swatch archive (dating back to 1772 and recognized by the Royal Commission on Historical Manuscripts as the finest of its kind.)

“Our predecessors were very good at creating lots of patterns and trying everything out. There were lots of resources to create new colors,” says Cordeaux, “We used one of our [historical] patterns and changed the scale and changed the colors and that’s what I quite like: it’s a very traditional tweed pattern but done with a very much more modern attitude”

“I initially sent over two or three iPhone pics of Negronis to get the color right for the red,” says Hranek.

“There’s no way usually that [our designers] would use the red or even the yellow from the lemon so it was an interesting kind of brief for them,” explains Cordeaux. “And also it would be quite easy to just go really bright on it but we managed to get colors that really were matching the Negroni”

“So you get this kind of deep Negroni red,” says Hranek, “and there’s a little bit of orange in there too on that field of charcoal-y gray. and its just phenomenal.”

For something as seemingly rarefied as a tweed based on a classic cocktail, interest has been phenomenal, too, both in expected markets like Korea and Japan — known with their taste for limited-run special-edition fashion – and, somewhat more surprisingly, among the kinds of western consumers who usually go to Fox Brothers specifically for their sober and dignified heritage flannels, not for bits of orange and lemon in their jackets.

“Sometimes men are a bit worried to wear a pattern,” admits Cordeaux. “They don’t know why they should or they think that they’re going to be too extreme. But It’s been received so well. We’ve sold a bright pattern to really traditional people who usually would not be comfortable in patterns. It is a bit more overstated than usual but because it has a lovely background story I think that they find it easier to wear.”

“I see a lot of fabrics, and it’s always interesting when a cloth has a unique story to tell,” says Mueser. “Aesthetically it is a handsome fabric but it doesn’t look that different from other checks or tweeds. To me this is evocative of countless Negronis I’ve enjoyed with my friend Matt who designed the fabric and a nod to the lifestyle and world he has created.”

“I love tweed almost to an obsession,” says Hranek. “I grew up in the northeast of America. My father always wore Harris tweeds, it was just part of the stylistic vernacular. In New York the winters are brutal and there’s nothing better than a tweed suit to be bulletproof against the elements. I think the way Jake has been making them for me – unconstructed, not lined, except for in the trouser, it feels very modern in the most traditional way.”

Rather than immediately move on to other cocktail/cloth combinations (Manhattan Mohair? Mojito Seersucker?) Cordeaux and Hranek are playing with the possibility of a warm weather Negroni fabric made of linen and twisted wool in a similar pattern and color (an idea which instantly brought to my mind the Negroni’s lighter spritz-like “Sbagliato” cousin, which swaps the gin for sparkling wine.)

“We’re drawn to the Negroni, we’re drawn to what matt’s doing, and then developing the whole thing into a cloth i think is quite fascinating,” says Cordeaux. “Everyone in the room that night at Harry’s bar all have the same interests and we like the same things and probably like the same drink and that that developed into the Negroni tweed is fantastic.” 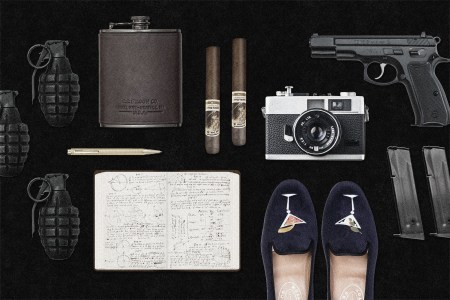 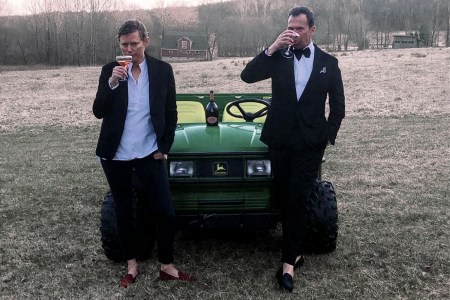 Why You Should Get Dressed Up to Work From Home 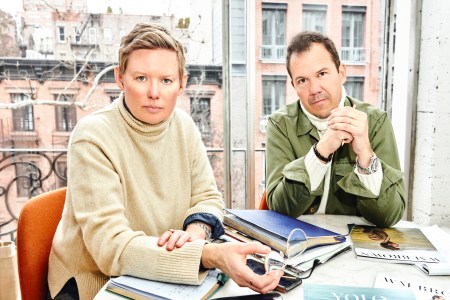